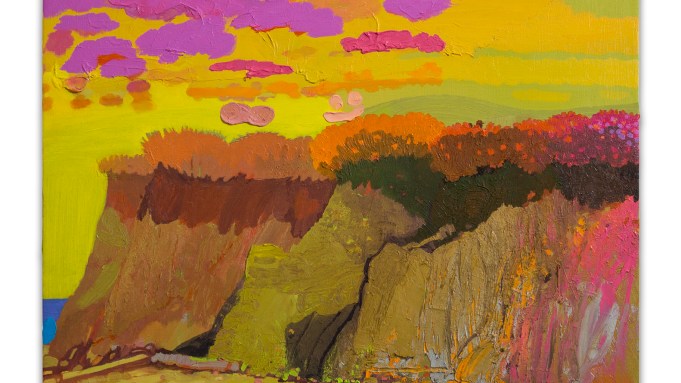 New York artists have traveled the hundred-some miles to Long Island’s East End since the late nineteenth century. And while twenty-six-dollar sandwiches, multimillion-dollar homes, and gift shops that sell brine shrimp swimming in glass orbs may be relatively new phenomena, the light, ocean, and remote end-of-the-world atmosphere have changed little in the last hundred years. Daniel Heidkamp’s exhibition “Coasting,” now on view at Harper’s Books, includes eleven new paintings that show a complex representation of the place. Through stylistic exaggeration, Heidkamp’s work shows both a timelessness inherent to the landscape and hints of a change yet to come.

Heidkamp’s paintings are art history­-­­­obsessed. As William S. Smith wrote in a brief profile in the June/July 2015 issue of A.i.A., “His domestic scenes and landscapes have an innocent quality, as though they come from an alternate universe in which social media is unknown and the relevance of representational painting has never been in doubt.” Referents and cleverness don’t matter so much as the pictorial language: he’s spent time with nineteenth-century work, and it shows. Both figuration and a messy gestural abstraction play a role in Heidkamp’s best work. A crumbling dune is closer to a de Kooning than anything you’d see on a hike. When viewed in person, the paintings take on their own topography-as palpably rugged as the landscapes of Montauk and the Hamptons themselves. For this interview, we wrote back and forth over email in late July.

HAYDEN BENNETT Before I went to the show, I’d seen the paintings only as images on a PDF. How do you feel about people seeing JPEGS of your work versus being in the room with it?

DANIEL HEIDKAMP I think it’s always been true that seeing reproductions helps the viewer “get” the paintings. Instagram takes this concept to the extreme. While the surfaces of these paintings can be somewhat deciphered in photos, viewing the work in person might feel more like a close encounter—more intimate, and visceral, messier—a human interaction.

BENNETT When you say “get” the paintings, do you mean recognize the subjects and, for lack of a better way of putting it, understand what’s in the images?

HEIDKAMP When I stand in front of a painting in a gallery or museum, often my mind either goes blank or starts moving too fast. As a painter, I start analyzing technical issues while simultaneously encountering colors and feelings on a more subconscious level. If it’s a big painting, my head is darting around in different directions, and all this is before I even arrive at the subject matter. Instagram squishes everything down into a tiny private backlit box. My fantasy, or fear, is that people spend more time “reading” or “getting” a painting on their phone, absorbing more information than they would even be able to process in person.

BENNETT In person, abstraction comes first. When I stood in front of Memory Dune, I had the experience you’re talking about. I wanted to linger in the texture of the cliff for a while.

HEIDKAMP Memory Dune is inspired by Ditch Plains Beach in Montauk. After years of erosion, the surrounding cliffs have been twisted into cartoonishly bizarre shapes, with multicolored rocks and parts of collapsed beach houses jutting out of the dirt. Of the entire series, this painting probably best embodies the nexus of realism and abstraction. The clouds and cliffs can be seen as pure color and form, but at the same time these sections have what I call “eye-touch,” where you can feel the painting just by looking.

BENNETT The show is pretty specific to place. There’s something strange and disorienting about walking outside and seeing the same view, no longer painted.

HEIDKAMP The Hamptons, and especially Montauk, is a naturally beautiful place. These towns are on a huge land mass that sticks out into the ocean, and the whole area is bathed in a nautical, super colorful, almost tropical light. Painting there makes you understand why so many artists have been drawn to it. It feels like an art vortex—a place that pulls in artists since it has all the right elements to create work. Those elements are in place now as in the past. I like that the same turf gave rise to observational realists like William Merritt Chase and Fairfield Porter but also provided inspiration for the abstraction of Pollock and de Kooning and Warhol’s Pop.

BENNETT Can you talk more about the idea of the art vortex? I’m wondering what it’s like to paint somewhere that has a certain art-historical importance but has arguably changed a lot since the painters who most famously captured it worked there. Do you think work made in such a place now would necessarily be different from work made there in 1899 or 1953?

HEIDKAMP The art vortex feeling usually comes from a combination of great scenery, great light, interesting characters hanging around, and history. When it works, you can just feel it. It’s like you’re standing inside a painting before you even start. The Hamptons has all those ingredients, as do other places I’ve painted, like Barbizon, France, and Olana [the former home of Hudson River School artist Frederic Edwin Church in Hudson, New York]. I think of these places as active wellsprings for art. Of course, in different artists’ hands and at different art-historical moments the results will vary drastically. For me it’s not so much about responding to the “art vortex,” but trying to channel it and make it work.

BENNETT You’ve mentioned Manet in other interviews, and a relationship between your work and his makes sense. The bears in Hampton Bears, for example, feel like Manet’s subjects-they’re looking right at you.

HEIDKAMP I wanted the feeling of suddenly encountering a wild animal on a nature walk—you’re surprised and the animal is surprised and for a split second you make interspecies eye contact. In the Hamptons, that happens most often with deer, but in my painting, I imagined a future where through climate change and environmental chaos the bears take over. The Manet painting I was most thinking of is Pertuiset, le chasseur de lions [Pertuiset, the Lion Hunter], but here the beast survives and the people are lost.

BENNETT The bears struck me as very contemporary, and the narrative about environmental chaos feels like an implicit part of the painting. There are a lot of coats of paint on it, I realized. Did you paint over this a few times to get to the idea?

HEIDKAMP This is the second painting in the “Bears” series. Earlier I painted what turned out to be a sort of boring landscape that was hanging around my studio for a while. One day I got the bright idea to add a family of bears, and the painting came alive. I worked on Hampton Bears on and off over the course of many months-the paint would get really built up in sections, like in the tree branches and animal fur, then I would paint even more to sort of hide how crazy the surface was getting. If you look at this painting from certain angles it looks like a topographic map, but in the right light or in a photo it starts to flatten out.

By working from observation I think I’m always responding to the present, but my tendency is to depict the contemporary scene and highlight what’s timeless. Looking at Bears today the viewer might think about environmentalism or the threat of Trump. But in another time the metaphorical weight of the bears might point to something entirely different. With a few exceptions, I am rarely topical when choosing my subjects—and I can say with much certainty that I will never paint a picture of Trump.