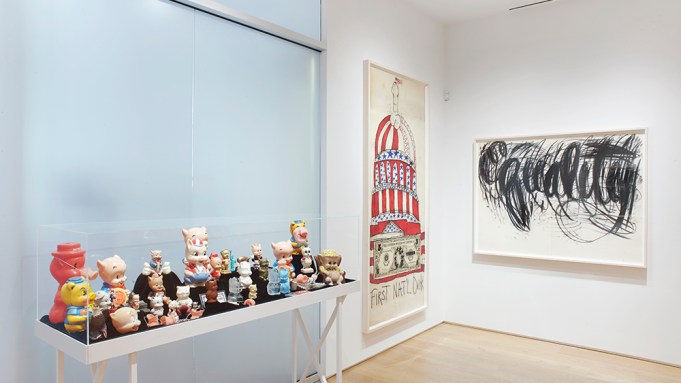 For about half a century Judith Bernstein has been using vulgar humor to talk about power, politics, and violence. “Cabinet of Horrors,” her exhibition on view through February 4, 2018, at the Drawing Center in New York, has works from various periods of her career, but the lion’s share of the paintings and drawings, hanging on orange-painted walls, are new ones about Donald Trump’s presidency. There’s a sense of urgency to the show; the most recent works, finished just a few weeks ago, depict Trump’s nuclear standoff with North Korean leader Kim Jong-un. On October 14, Bernstein was interviewed about the show and its background by curator Alison Gingeras. The event was part of the Downtown Culture Talks organized by the Soho Arts Network. Highlights from their conversation are presented below.

ALISON GINGERAS  Let’s talk about how your work has been in process since 1966, when you made your Cockman piece. You’ve said you mined the men’s bathroom for iconography.

JUDITH BERNSTEIN  I was a grad student at Yale when I read in an article in the New York Times that the title “Who’s Afraid of Virginia Woolf?” came from bathroom graffiti. All of a sudden a lightbulb went off. At the time Yale was an all-male school. There were only women among the graduate students. I went into the bathroom and I got a lot of insight. It was also a lot of fun. I didn’t take anything directly, but I got a lot of ideas from the scatological graffiti, where men are writing responses to each other, sort of like tweets are now. Graffiti has more to it than you think. When people are defecating on the toilet, things are going through their mind and they just write down that information. So there’s a certain psychological underpinning that the work has. I started using canvases that were distressed, so they’d look like old walls, and then I’d make up things like Supercock, a guy flying through the air with a cape like Superman and a penis three times the size of a guy. Then I made Superzipper, and then I made a Supercock that was attached to the White House, so it had political meanings.

GINGERAS  Your work as a grad student was very political. At the same time, second-wave feminism was coming to the fore. Women were coming together to assert agency and get their work seen. That’s when you got into some trouble. Your use of phallic iconography got you into hot water, not just with men but with women. Could you talk about your experience with censorship?

BERNSTEIN  After Yale I went to New York and wanted to be part of the gallery system. I joined a group of women that founded a gallery. Lucy Lippard had a file, and some women went to Lucy’s and found people they were interested in and went to their studios. There were a lot of women who were like me. They went to graduate schools, they wanted access to the system, and they were blocked.

GINGERAS  No matter what kind of work they made. It wasn’t necessarily because they were making sex-positive work. Women were just stopped.

BERNSTEIN  That’s exactly right. So we started a gallery, and it was wonderful because we felt part of the system. I wanted the gallery name to be TWAT: Twenty Women Artists Together.

GINGERAS  That would have been so much better!

BERNSTEIN  It would have. But even at the time when I said this I didn’t take it that seriously. I thought it was a joke. Howardena Pindell came up with Jane Eyre, and then we said AIR, an acronym for Artists in Residence. Then there was at the Philadelphia Civic Center, organized by Cindy Nemser, who was part of the Feminist Art Journal, and Marcia Tucker, who was then working at the Whitney Museum, and Anne d’Harnoncourt from the Philadelphia Museum, and others. They included about eighty women, including Louise Bourgeois and others who were just starting out. But when the Civic Center’s director and curator saw my drawings of screws, they thought that women and children would be scarred forever if they saw them. The screws were definitely very phallic.

GINGERAS  And they were very large.

BERNSTEIN  Size is always a factor. Size matters. It makes people feel very diminutive in comparison. So they were horrified. They went all the way up to the mayor, who was very reactionary, and they blocked my piece. So then a whole group got together and made a petition. A lot of critics and museum people signed it: Clement Greenberg. . .

GINGERAS  Lawrence Alloway—all the major people of the day signed the petition in support of your work.

BERNSTEIN  That’s right. Barbara Rose—many people. And all the women who were in the show. But they still didn’t let me in.

GINGERAS  At the same time, numerous other women were facing similar things. That’s how this group Fight Censorship was born. When I found out about Fight Censorship I thought it was revelatory, for many reasons. It was founded by Anita Steckel, who wrote a fantastic manifesto.

BERNSTEIN  Every time we talked, she would say: “If a penis is wholesome enough to go into a woman, it should be wholesome enough to go into a museum.” She had worked as a croupier in Las Vegas. She was quite funny. Louise Bourgeois, Hannah Wilke, Joan Semmel, Eunice Golden, Juanita McNeely were all part of the group. We’d meet at Louise’s a lot of times. She was a great cook. We also had a performance at the New School.

GINGERAS  Yes, that’s why I initially came to you. We found these fascinating images from 1973. There were these very pulpy ads for a ten-meeting course that Fight Censorship took part in, organized by a guy who turned out to be a UFO expert. He invited all of you to give a presentation, and it started with Charlotte Moorman doing one of her topless cellist performances.

BERNSTEIN  She was taking off more clothes than any human would wear. She had twenty bras on, all these sweaters on. God knows what she had on. But it was really quite charming. Louise brought in Fillette [1968], which was a penis piece. She held it like a baby.

GINGERAS  What’s remarkable was that it wasn’t slides. It really broke the format of the academic paradigm. You all brought physical works onto the stage and spoke about them. This group was a bit like a traveling show.

BERNSTEIN  It was a short-lived thing, but we were on the radio for a while. It was kind of a crazy group. We got some press coverage, but we weren’t taken seriously. At that time women artists were like a joke.

BERNSTEIN  I was not embraced by the feminists. A lot of feminists felt the only way to discuss feminism was self-referential. They didn’t see how my penises could be feminism. My idea of feminism was that I was observing the guys and making a comment on their behavior. These huge phalluses that are nine by thirteen feet are actually the subtext of what you’re seeing in a Jackson Pollock painting. But they thought if it wasn’t vaginal it wasn’t feminist.

GINGERAS  You didn’t exhibit for decades after this moment with Fight Censorship. People think of you as a new young artist because your career started in earnest in 2008, with your exhibition at Mitchell Algus.

BERNSTEIN  Before that I was dead in the water. I was censored and then I didn’t show for almost twenty-five years. It was very depressing for me. I was teaching part-time, in an adjunct position and getting paid almost nothing.

GINGERAS  But you kept making work the whole time, and you have this treasure trove of work to look back on. So now I’d like to address your show here at the Drawing Center. Your work has spanned ten presidencies and you’ve spared none of them. And the perfect place to talk about the Trump presidency is the men’s room.

BERNSTEIN  There’s a piece here about Dick Nixon, First National Dick, that was done in 1969. Then there are Equality, Liberty, Evil. . . those word pieces are all from 1995. So there’s some history that hadn’t been seen before. I was aghast when Donald Trump became president. I was like many of us who was sure that Clinton would win. I thought she was a flawed candidate. I voted for her, of course. But I’m not a fan of Hillary Clinton. Though there’s no comparison to Trump. We now have a president who is a joker, a jester, a racist, a sexist, a sociopath and perhaps a psychopath. . . He’s using the White House as his own personal cash machine. So in this show I have the Trump genie coming out of the bottle. I used the Nazi symbol as well as money, the reason these people run is because they have a lot of money. That’s true for Clinton as well as Trump. I have the slot machine, which is of course Trump in Atlantic City, and the penis is the lever, and he has three cocks in a row. The slot machine has the White House on top of it. He’s cloaked in the flag, which is so ridiculous because dissent is part of the American way. He uses American symbols in a simplistic, reactionary way. I have the cabinet of horrors, because all the people in the cabinet are clones of him. I have Trump in a jester’s hat. . . I have a lot more than what there is here, but I’m glad to have a good representation of how I feel about Donald Trump.

GINGERAS  Will you continue this series of work?

BERNSTEIN  I’ll go into other things I’m interested in. But I’ll still be using sexuality as a metaphor: the male, the cock and the female, the cunt. I will be doing this for a while.

Dump Your Rolex for One of the Best Casio Watches