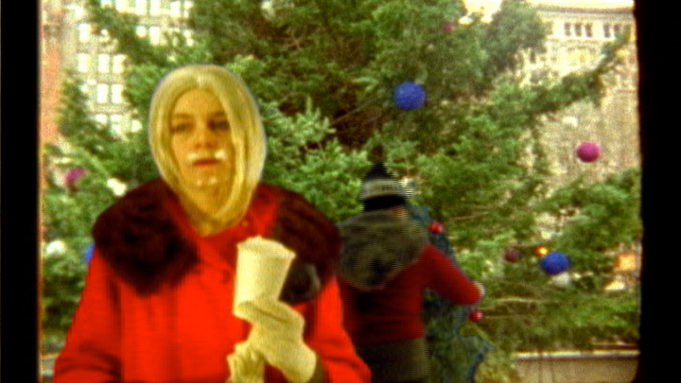 Despite her reputation for reclusion, poet Emily Dickinson had a little-known gift for mimicry. Dickinson might have found something of a psychic ancestor in Shannon Plumb, a Brooklyn-based artist who creates dialogue-free, performance-based films that are insightful meditations on the act of personification. The artist’s newest work, The Park, is a public art project created for New York City’s Madison Square Park, and will be shown in daylight hours until April 23rd.

While making The Park, Plumb filmed herself in Super 8 mm color film in front of a green screen, then superimposed her performances over secondary shots filmed in the park; the process of video transfer gives the work a pixelation that recalls security surveillance videos. On four flat screen televisions set up in close proximity to the park’s ever-magnetic Shake Shack, the series of 12 films-each about two minutes in length-play on an endless loop. In the films, Plumb interacts with herself as different characters; each work celebrates the human encounters urban proximity engenders. The fact that one must read the action in these films through gesture, rather than dialogue, should by no means characterize the work as a conceptual chore. Plumb perfectly executes myriad circumstances, painting a portrait of the park that is both of and beyond reality-full of the humor and hyperbole of New York City’s sprawling stage. Though her films give silence its well-deserved substance, if Plumb ever did decide to use dialogue, she’d surely be successful with that, too. Her speaking voice couldn’t be more charming.

AW: One of the main aspects of the films you made is their relationship to the seasons-each season is comprised of three films. Did you film these over a full year?

SP: Yes. The tough part about it was that when the project finally got going, the springtime buds were gone-when it was time for me to start shooting, springtime was kind of on its way out. That was disappointing. From then on I just started going to the park and getting background shots, studying people-just sitting on the bench and getting to know the whole nature of the park.

AW: Did you observe most of the situations and characters in the films? Or are they fictive?

SP: It’s kind of a mix of both-you kind of discover situations as you’re sitting in the park. You don’t know if they’re coming from actual happenings or not. There are certain characters I would see along the way: there was a man right around the block, for instance, sitting on the concrete with a whole mess of a banana peels next to him [Plumb’s piece features a character with a pile of banana peels] and it’s just like: “What’s going on? What is that?” So some things are taken from real life. Others are a combination of observations.

AW: I find the animals in that park to be so aggressive; the squirrels practically sit on your lap. So in your film “Magic,” I love how the pigeons are dive-bombing your characters-that’s such a truism of that park.

SP: The day we were installing, obviously people didn’t know who I am [Plumb’s characters are heavily costumed, wigged and made up], so I could just sit there and listen and watch it with them. And they’d talk to me honestly. A man said to me, “This is exactly what happens.” I was so excited, because most of the stuff in the films is just relating to being human.

SP: It’s ironic: I wanted to do the park a couple years ago, because I have two sons and I was always going to Prospect Park. I started tinkering with the idea. The park is a great temporary subculture, and so I had been inspired by the idea of parks. But in Madison Square, there are just so many characters-such a diverse crowd.

AW: Was there a specific decision you had to include multiple characters-all played by you-in one frame?

SP: I’m not a good collaborator in the performing sense. It was always difficult for me to do something with someone else in the frame, so I decided to play the other characters. I did that with a couple of films prior to this, but with this one it was really important. It’s not a park until someone sits next to you on the bench, you know? It makes it tricky and exciting when you’re performing. You don’t have that person next to you, so you really have to pretend.

AW: In the first film in the series, you have two characters. The female character has an old typewriter and an old-fashioned telephone. The male character has all the modern gadgets, and is texting away [on his cell phone]. Was that a cultural commentary?

SP: It’s definitely a comment on the isolation of cell phones, and also on how fast everything can be done. It also became kind of rich versus poor. The lady is doing this stuff in the old style because she can’t afford the new stuff. Everything is a little bit slower, but she’s still determined. With the guy, everything is up to par, and he’s got everything he needs to live in 2009. It’s kind of a little battle between those who have and those who don’t have exactly what they’re supposed to.

AW: And it’s interesting that you yourself are playing with advancements in technology. A lot of the viewers of this piece, when I was there, were questioning why there was TV playing in the park. And then of course, they watched and got sucked in by it as an artwork.

SP: It’s funny, the man who did the music for the piece, Dave Wilder — he’s really amazing. And the soundtrack he created for the credits is so much like a TV show — , like ‘70s sitcoms — , that kind of pulls people in, because they wonder if it’s “Good Times,” or something.

AW: Yes, there’s definitely something kind of familiar, yet “off,” about the whole thing. The film “Halloween” really highlights this: You play a mischievous little cow bedeviling a park custodian. It’s cute, and yet there’s something kind of sad about it.

SP: That’s my least favorite, because I couldn’t figure it out. I shot that piece two and a half times, because I couldn’t figure it out. It ends up being more serious than everything else to me. There’s a worker, and he’s just trying to rest. Then, all of a sudden, this creepy dude comes around in a cow costume, and all he’s doing is messing up the place. Every time people are working hard, there’s always someone coming around just to take from them. I could not make that one funnier. That’s why I did it again, because I asked myself: “Why is this thing getting so serious on me?” But I guess that’s what happens. In the park, there’s always something just a little bit creepy going on. For me, I love comedy, and I want to make people laugh, but somehow when you’re observing things, the seriousness of life can creep in on you.

AW: But that tension is what makes that film great. And, for what it’s worth, life is kind of creepy. There’s something nice about highlighting that. SP: Even at the last minute, I thought: “I have to re-do this one.” But I just figured that there are some things that have to be left as they are, and they say what they have to say. I couldn’t change that.

How to Make a Carajillo, the Coffee Cocktail That’s Better Than Your Espresso Martini

Bob Dylan Apologizes Over Autopen Controversy: ‘An Error in Judgement’