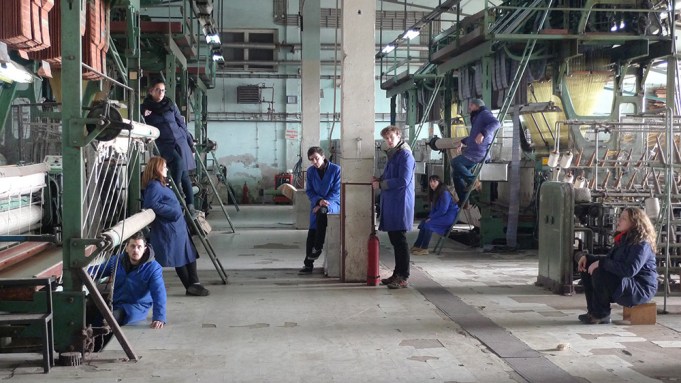 “Art has to be national, an artist has to be national,” Maja Bajevic repeats in the 2012 video work Art Has to Be National, combing her hair à la Marina Abramovic in Art Must Be Beautiful, Artist Must Be Beautiful (1975). It’s just one example of Bajevic’s explorations of national identity in her work. Born in Sarajevo in 1967, Bajevic moved to Paris after seeing the exhibition “Magiciens de la Terre” at the Centre Pompidou in 1989. Around this time, war broke out in her native country. In subsequent years, residencies and exhibitions took Bajevic to Berlin, Zurich, Boston, and New York. Informed by experiences of life in different cities, Bajevic engages with the foundational concepts of modern society, such as gender roles, religious dogma, and the free market, and how these concepts play out in everyday life.

“Power, Governance, Labor,” her current exhibition at the Migros Museum für Gegenwartskunst in Zurich (on view through August 13), is a midcareer survey that concentrates on works created in the last decade. Bajevic is as likely to be the protagonist of her own works as she is to involve other actors. For the video component of her 2015 installation Arts, Crafts and Facts, she staged a choral intervention in a carpet factory. The blue-coated singers state facts about raw materials and economic and banking practices, highlighting how alien the vocabulary of production is to manual labor. Among other sculptural installations, video works, and framed drawings in the Zurich show is a scaffold tower standing against the gallery windows. Bajevic has been collecting economic and politically-charged phrases (“Equal Pay for Equal Work,” “Silence=Death,” “Better Dead than Red”) since 2011, displaying them in various forms. On several occasions during the run of the exhibition, performers have scaled the tower, writing and erasing slogans in plaster dust on the windows (To Be continued, 2011–).

Bajevic is now back in Paris, preparing for the exhibition showcasing the artists shortlisted for the Prix Marcel Duchamp. (The others are Joana Hadjithomas and Khalil Joreige, Charlotte Moth, and Vittorio Santoro.) I spoke to her via video chat about her plans for the exhibition, which opens at the Centre Pompidou on September 26.

AOIFE ROSENMEYER  You have a diverse background, and have lived all over the world. How would you characterize your nationality?

MAJA BAJEVIC  I have had French citizenship for about fifteen years, and the country that I originally come from, Yugoslavia, does not exist anymore. I feel multinational, as many people do nowadays, but we multinationals are still a minority that is difficult both to place and to manipulate. It can be a burden, but also an advantage. You have distance from both places, from where you belong and don’t belong, because you never belong anywhere entirely.

ROSENMEYER  You sometimes work with embroidery and craft materials. Is it important to you that these are conventionally considered female mediums, or that embroidery is a Bosnian tradition?

BAJEVIC  I’m more interested in the notion of time while doing embroidery, which is completely different from the headlong passage of time we usually experience today. The works’ value lies in something done by hand, real labor, and the time that it takes is in profound contrast to how quickly the world is moving.

ROSENMEYER  Information and the ways in which it is communicated are also central to your work. In Hide and Seek [2017], for example, you translate messages from encrypted internet sites into Morse code, flashed from lightbulbs hanging on a metal, laboratory-like setup. Visitors can decipher the code using a smartphone app. Can anyone read the code without this mediation?

BAJEVIC  Not many—Morse code is dying out, although it was used again during the Arab Spring, I heard, to send messages saying “internet down, cars burning.” Morse code comes from the Industrial Revolution era, a moment when the world changed significantly, while digital code—which is also binary—is a modern technology that has also changed everything. The coding and decoding involved in this work draws our attention to the information on display. We live in a “post-truth” world, and the truth remains difficult to find.

ROSENMEYER  Given the speed of contemporary life, audiences are as likely to be overwhelmed by what they encounter in your exhibitions as they are to be receptive. Is this part of the reason you use ephemeral materials like dust or digital projections onto steam?

BAJEVIC  Working with ephemeral materials is a means of going against the drive toward possession. It also connects with a notion of history in which the only constant is change. Our belief in the present could become disbelief in the future. We tend to forget that.

ROSENMEYER  Do you believe in the potential of protest in an art context?

BAJEVIC  Art’s role, if it is socially engaged, is to pinpoint what is wrong in society rather than lead protest or demand change. That’s why I want to work with people who can make an impact. Hacktivists now play the role in society that socially engaged art wants to play, but sometimes fails to. Whistle blowers call for awareness and action. As an artist, I try to talk about what I think is important in collaboration with others who speak different languages, in the hope that the multitude of languages spoken will reach a broader group of people.

ROSENMEYER  In your video work How Do You Want To Be Governed? [2009], you remain silent while a man repeatedly, aggressively puts the question of the work’s title to you. It’s an impossible situation, as you cannot meaningfully reply, yet it remains hopeful, because you resist and remain silent. You employed the roles of the strong, violent male figure and the powerless woman so obviously that I think it is a useful template for other forms of power relations. Would you agree?

BAJEVIC  Yes, I’m always interested in how much the private and political are connected or not connected. Gender roles are an illustration of private power in the patriarchal society we live in. But, on the other hand, the question of how you want to be governed is a political question for everyone, man or woman.

ROSENMEYER  You have about 170 slogans in your collection. How do you select them?

BAJEVIC  I invited people to work with me on this, to have a degree of objectivity. As soon as you make a selection you are already being subjective, so I thought that it would be more interesting if five people were selecting, rather than one. We aim to pick slogans that we think are pertinent for a certain period, to measure the temperature of the times through the quantity and quality of the slogans.

ROSENMEYER  The phrases, some of which were coined decades ago, refer to ongoing struggles in society, like equal rights for women and minorities. Do the slogans ever make you feel optimistic?

BAJEVIC  It makes me optimistic because I think it can’t go on like this. Society is becoming more and more difficult to live in. We have already had movements like Occupy Wall Street and Podemos. People recognize that power has a druglike effect: those in power forget that they could lose power. They are approaching the point when people will say: “No—this is not OK anymore.” When it really gets to be too much, there is the possibility of change, in my opinion. We will see.