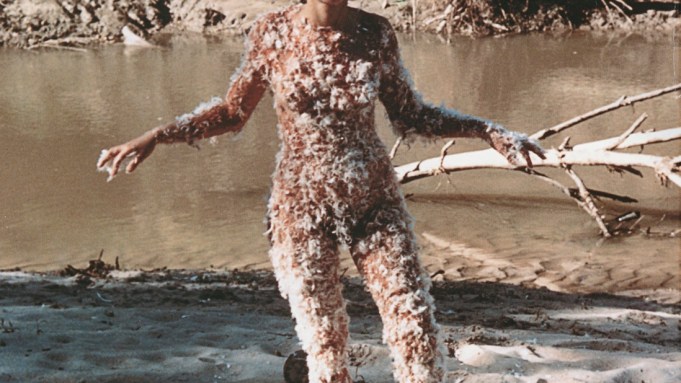 Cuban-born performance and multi-media visual artist Ana Mendieta died in 1985 at the age of 36, leaving behind a massive collection of un-exhibited works. Now on view at London’s Hayward Gallery is “Traces,” her first UK retrospective, in which slides of these pieces reveal an untold career.

Born in Cuba in 1948, Mendieta was sent to Iowa by her parents at the age of 13 to escape the communist regime of Fidel Castro. In a subsequent search for identity and belonging, Mendieta turned her attention to the Earth and the female body as her core subjects. Though documented across a wide breadth of medums-photography, film, performance, sculpture-they were, in essence, her only tools. Mendieta developed a visual vernacular of feminine forms through experimentation with materials such as blood, wood and stone. In her famous “Siluetas” (Silhouettes) series, created between 1973 and 1981, she left imprints or outlines in the earth with her body, sometimes adding ritualistic adornments of flowers or fire to those markings.

Mendieta died in New York in 1985 after falling from the 34th-floor apartment she shared with her husband, the sculptor Carl Andre. Some suspect Andre of having thrown Mendieta from the window, though he was acquitted after a three-year trial. In the last room of the exhibition, the duality of the show’s title, which references both the marks made by her body in the earth and the work left behind after her death, is drawn out to a haunting degree. Presented alongside notebooks, postcards, and other archival materials, several white pillars are set up as projection screens for old-fashioned slide projectors showing the un-exhibited works. Each pillar is marked with the year in which the works shown there were made.

Hayward Gallery chief curator Stephanie Rosenthal discussed her fascination with Mendieta’s work and process in an e-mail interview with A.i.A.

RYANN DONNELLY Did you find it difficult to navigate the controversial circumstances of Mendieta’s demise in putting the retrospective together? Is her death addressed in the show?

STEPHANIE ROSENTHAL Her tragic death was always present in my mind, as her career was just far too short. But it had no place within my curatorial concept. The show is about the work she did during her lifetime. Her death came unexpectedly so the work had no connection to it.

DONNELLY Can you talk about how you organized the show for display?

ROSENTHAL The show is organized chronologically, using themes to bring out crucial moments in her career. Implemented in this narrative are two exhibitions we recreated: “Silueta Series” [1977], at the Gallery of New Concepts at the University of Iowa, where she showed her “Silueta” works on a large scale for the first time, and “Rupestrian Sculptures” [1981], which was her exhibition at the AIR gallery in New York, which showed the first works she realized in Cuba.

They enable us to really understand how Mendieta selected, printed and showed her work. The last room, which is called “Re-Tracing Ana Mendieta,” allows us to understand this process on an even deeper level. Seven slide projections covering the period from 1972 to 1983 provide the context for the works shown in the preceding rooms.

DONNELLY What was the most important thing you wished to highlight about her work and career?

ROSENTHAL The curatorial concept focuses on Mendieta’s artistic process. It is always a challenge to realize an exhibition with an artist who isn’t alive anymore, and make transparent why she/he is still relevant. I became more and more fascinated by her artistic process: how she realized her sculptures, which in the end were totally ephemeral; how she decided to document them with 35mm color slides or Super 8 [film]; and her decision to show either a carefully selected slide as a print or to exhibit a film.

The toughest challenge really was to find an appropriate way to show the material I found in Mendieta’s archive at the estate: over 5,000 slides, contact sheets, artist’s statements, and so on. It was really important that all this material was present in the show without becoming artwork. By having a separate room at the end of the exhibition, displaying slides, notebooks, postcards and other archival materials, along with comfortable seating, I think we found the perfect solution.