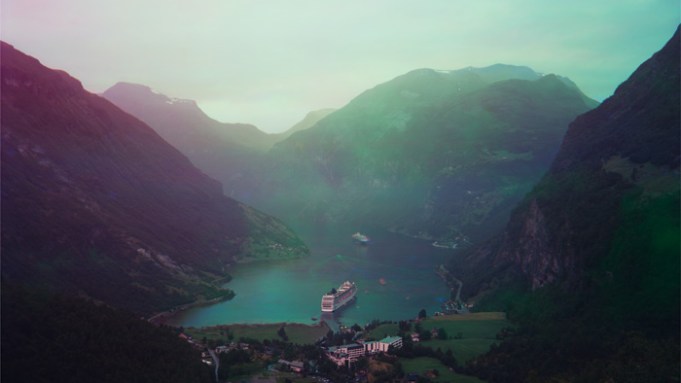 Never before have the images produced by Florian Maier-Aichen—typically, aerial photographs of sublime landscapes—seemed so unreal and yet so within human grasp. For his third exhibition at 303 Gallery in New York, the artist has used Photoshop more freely than ever, adding both illusions and illustrations to his readymade photographs. Painter Tim Gardner, who is the artist’s stable-mate and often works from photographs, asks Maier-Aichen about the parallels in their practice, and making a Kenneth Noland in order to destroy it.

TIM GARDNER: Would you call these types of work drawings or paintings?

FLORIAN MAIER-AICHEN: These are drawings. I would never say that I make paintings.

But these are drawings that aren’t made to be drawings; they only come into existence after they have been photographed on the copy stand, which is a basic mode of photography that has fascinated me for a long time.

GARDNER: Was it a leap for you, to incorporate these more handmade strategies?

MAIER-AICHEN: In a way I just wanted a reason to make more handmade photographs and chose the abandoned technique of traditional animation. It’s not a big deal to incorporate drawing and the hand into photography-just remember how painstakingly manual a process photography was in the 19th century, and how highly retouched and enhanced photos were just by default. This was forgotten when the process became industrialized and the camera turned into a black box.

GARDNER: You have been working with Photoshop for a long time… How long?

MAIER-AICHEN: For many years. I always wanted to make my own pictures and not rely so fully on the world outside. So instead of staging the photo in real life I started to work and experiment with different programs on the computer to go into the photographed image itself.

This might seem odd for a photographer. But I got into photography as kid when I got my first black-and-white darkroom, as a gift from my parents’ friends. It was very playful and more of a lab, and developing the film and printing the images and seeing them materialize in the tray were the main sensation.

GARDNER: Recently, you rented a studio, which seems to have made an impact on you. You are, of course, best known for your aerial photographs of landscapes.

MAIER-AICHEN: That’s right. I rented a studio in Cologne because I wanted to do some more low-resolution images as opposed to the super detailed realism that comes automatically with the use of a large-format camera.

GARDNER: In an image like La Brea Avenue in the Snow (2011), we’re dealing with a confusing set of references—Los Angeles, for one, when it’s supposed to be snowing.

MAIER-AICHEN: I first found the location in a book. Then I set out in Los Feliz looking for these kitschy fairy-tale buildings. They felt very poetic and special in a city that can be very indifferent and dispassionate.

GARDNER: The sky has the feeling of a classic German photograph; it’s so washed out.

MAIER AICHEN: Exactly—I was looking at the stereotypical Becher images and their very moody skies. The image was taken on a rare rainy day and I drew in the snow on the computer and tried to make the piece more “timeless” by adding “period” cars from the ’70s to the ’90s.

GARDNER: I’m interested in how this effect is made. How did you create the snow?

MAIER-AICHEN: I drew it in. When you look very closely you realize that the snow is drawn in an almost Pointillist manner consisting of very tiny dots. To speak film tech, it’s like film grain. That is the way I work. Another photographer—say, Gregory Crewdson—would hire a huge crew and put snow on the houses. I’m a one-man operation, so I needed to figure out a way to do that alone.

GARDNER: Is this type of maneuver “cheating?” Have you ever faced that kind of response to the work?

MAIER-AICHEN: People not in the know have a huge problem with Photoshop, merely because it’s so democratic. Photography is already a medium of the masses and there are very many hobbyists, so it lacks prestige and status.

The computer and editing programs are great tools, and really have freed up the medium-often for the worse, but in a few cases also for the better.

GARDNER: In my work I use images based on my experiences or that depict locations I am very familiar with. In your work you’ve often gone on expeditions. It seems you’ve found new ways of traveling by inventing scenes through photography.

MAIER-AICHEN:  The pastoral from Norway [Untitled, 2011] is an iconic locale for postcards. I remember trips to Norway as a child, and the overwhelming beauty of nature. Germany is a very industrial country with little scenery; you either become an engineer or a dreamer.

I was thinking about going back to Norway for years, and last year it eventually happened. Of course, nothing matches fantasy, but in [the tourist village and cruise port] Geiranger, it is not so much about the place but rather about the perfect picture, combining elements of commercial and postcard imagery and 19th-century Pictorialism.

GARDNER: This body of work includes multiple presentations of art within art—hat is, reproductions of artworks as compositional elements in your photographs.

MAIER-AICHEN: As a photographer I have a built-in inferiority complex vis-à-vis painting. But now all art is mediated by photography. I have fantasized for years about making photos of destroyed artwork.

GARDNER: Östersjön is probably what you’re referring to. There, what interested me was this kind of taboo you’re breaking, as the Noland slips into a liquid substance. There is this incredible tension with realism in that picture.

MAIER-AICHEN: That is not an actual Noland painting but a copy. His work is pretty easy to copy; my wife Stephanie did it. We liked that it’s a modernist work of art that can be misinterpreted as a landscape.

I was hoping that by adding a naturalistic foreground, those images would transform from abstraction to a landscape, hence the title, Östersjön, which is Swedish for “Baltic Sea.” (For most people it sounds dada or escapist-remember the region of Osterlish in Chaplin’s The Great Dictator, the great refuge.) We also poured a container of water from the Baltic Sea into the tank to give the title more literal meaning.

GARDNER: Another reference to art history comes in Untitled (2011), which looks like a photograph of a Surrealist rotodrawing.

MAIER-AICHEN: This has nothing to do with Surrealism; this is a gestural scribble, and very unlike the mechanical constraints of the camera. It starts out with a pencil scribble, but the way it gets translated back, inked, filled with acrylic paint, then re-photographed is very painstaking and mechanical, too.

Photographs are always fakes in terms of being copies, but they can also be pretty original. The traditional animation pictures can’t exist without the camera and the copy stand. When you look at the transparent cel and the drawing in real life, they have no connection to each other. And only in the photograph they start to come together.

RS Recommends: The Best Gaming Headsets to Upgrade Your Gameplay