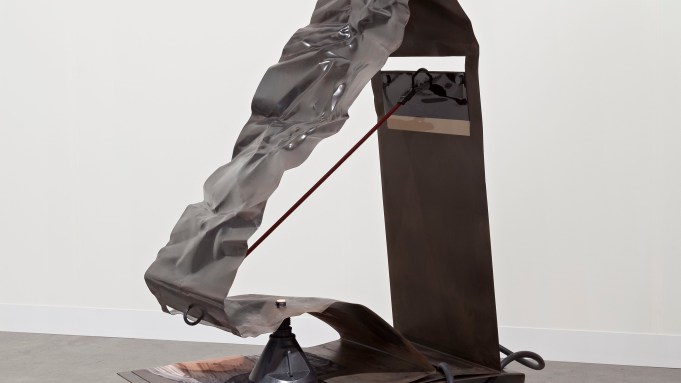 A.i.A. caught up with the artist in her Brooklyn studio to discuss the modularity and inscrutable logic in her work, as well as her future endeavors, which include participating in this year’s Taipei Biennial and an upcoming exhibition of post-internet art at the Ullens Center for Contemporary Art in Beijing (Mar. 1st-May 11th).

TIM GENTLES While your work alludes to certain familiar forms, a clear notion of these objects’ functionality always seems to be just out of reach. Can you speak a bit to this uncanny feeling?

ALISA BAREMBOYM I often encounter objects that I don’t understand, such as shrink-wrapped luggage. There’s not really any logic behind it and I like that. I want to create a similar feeling when I make things: that there’s something that’s familiar and that should make sense, and that maybe you could appropriate its use in some way. The idea that anything can potentially be a tool—you just have to find a use for it—is interesting for me.

GENTLES Your work seems to be quite invested in the processes of manufacturing, especially the customizability of industrial tools.

BAREMBOYM Actual industrial equipment is typically highly customized. Each machine is very specific—they’re made to wrap a certain product in a certain way or screw a small screw into a certain object—whereas the products that come out of them are very generic. It’s interesting to deal with this confusing shift in the materiality of both the machine and the product by customizing the solution and making a system that follows a different set of parameters than originally intended. It’s like a mangled conveyor belt that now functions with varied or irregular results, which is what I was thinking about with the new works I made for Miami Basel.

GENTLES Do you think that your early childhood growing up in the USSR shaped your understanding of the commodity form, which often feels somehow improvised or provisional in your work?

BAREMBOYM I do think that I think about products in a different way. I want to bring it almost to an elemental level. I’m interested in the way these products get named or circulate to a certain degree, but it’s less about the commodity as it’s already packaged and more about the packaging and how it’s made. I emulate certain practices of making products, but use them within a different logic.

GENTLES Your sculptures often have titles that are very corporate and opaque.

BAREMBOYM I used to give them really obvious names, like Pallet. It was opaque in that it wasn’t giving you anything other than what the works were already giving you. Now the titling’s still opaque because I’m using invented conglomerate words instead. For instance the pieces I showed in Miami this past year were called Adaptic Systems, Globility Systems and Modulism Systems. I know which pieces are which, but you could probably interchange them, and I like this idea of them being kind of modular. It’s tied to the idea of not understanding the work’s material state or what the materials are—all of these things are just as abstract as us believing in something like petroleum causing cancer. There’s definitely this weird belief system to understanding materials and how they function and interrelate.

GENTLES Do you have any upcoming projects that you can talk a little bit about?

BAREMBOYM I’m working on some new pieces for the Taipei Biennial that work off of those conveyer belt systems, but with an approach that’s a little bit more modular. One of those sculptures from Art Basel is going to be at the Ullens Center in Beijing in the show about post-internet art, which is a very weird and unreliable term. I don’t necessarily think of my art as being post-internet, but I think the show takes a broad approach to understanding what that term means.