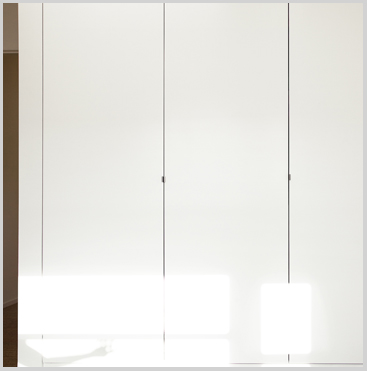 Uta Barth’s recent works [on view through October 29 at 1301PE, Los Angeles; opening Oct. 27 at Tanya Bonakdar, New York] are photographs at their most literal: pictures of light. All the images in the series “…and to draw a bright white line with light” (all work 2011), wrapped along three walls of 1301PE’s upstairs space, share the horizon of a windowsill, which is intersected periodically by the irregular curvature of light across a curtain. Depending on the time they were captured and Barth’s manipulation of the fabric’s slackness, the light’s form varies from slender strands to wide swathes spilling through its gauzy texture. These renderings of interiors emphasize optics as they invoke a slow-moving process of looking.

For the series “Compositions of Light on White,” the artist opened and closed blinds to produce rectilinear beams of light projected onto a closet. Architectural elements disappear into a hazy, intense monochrome, invoking a tabular, painterly quality, affirmed only by the composition’s margin—a sliver of hallway to the left, the diagonals of a stack of drawers to the right. The spatial complications that these forms generate on the picture plane demand double takes, asking that the viewer not only contemplate the work, but also the phenomenological experience of looking itself.

PAUL SOTO  “Compositions of Light on White” consists of serial images of light projections onto a single architectural feature, your closet doors. The close-up image verges on complete abstraction, and the viewer must spend time staring in order to identify vertical lines as the edges of a door, and a silver form as a hinge, for example. What attracted you to this space, and what formal decisions did you make with respect to your proximity to the subject matter?

UTA BARTH  I first noticed the light. For one week in June, the light projected through the raised blinds in my room is perfectly parallel to the lines of the closet door you see here. One reason you read these images as close-ups is that the house and this room is small. I cannot get the camera further away. The camera stays almost exactly in the same place for the work in this series. I was interested in making these compositions by only working with the grid: that of the minimal architecture and the grid of light I could manipulate as it fell onto the doors. The appearance of the image fluctuating is created by cropping them in order to achieve cohesive compositions. I suppose I could use a different camera and other lenses, but I am interested only in the area where the light happens to fall; I am not trying to describe the room.

SOTO  The confusion between depth and flatness owes to Vermeer’s compositions and Malevich’s forms. The abstract, rectilinear shapes in the center are framed by formal slippages in the margins–the appearance of a diagonal in the hallway, or of your set of drawers, as in Composition #2 and Composition #4. This suggests an experience of the work that extends out beyond the photograph itself. Could you tell me about this interplay, or confusion, and its relation to the photograph’s overall composition?

BARTH  The shadow lines from the built-in drawers on the right complicate one’s initial perception of seeing a flat field. At first glance we assume we’re looking at totally flat geometric abstractions, but as you point out, a careful look at the edge of most works will suddenly flip the image into three-dimensional space. I have played with the inversion of figure and ground in a desire to see what we normally ignore. Here the margins play two roles: they bring us to seeing deep space where we don’t expect it and they also function as carefully framed compositional devices. When you are playing with geometric composition, it is a game of how every field or line relates to the edge—everything is about the edge. Take a Mondrian painting, move the edge or randomly crop it, and the whole composition just falls apart.

SOTO  In Compositions #10 and #12, the margins have been cropped altogether, creating very abstract images, though the shadow and diagonals you would expect there have been drawn towards the center of these two compositions. They are like bookends to “White on Light.”

BARTH  All deep space in these two works is cropped out. Composition #10 is the most minimal work in the show. It gives little information—it could be a drawing, an etching or a painting, as no camera-like representation is visible. So it is the toughest, most stripped-down work in the show (and maybe, for that, my favorite piece). We can understand it, though, in the context of the rest of the work.

Composition #12 is the point of departure for a whole other way to make these images. It tilts one of the closet doors open, ever so slightly, yet the tilt simply reads as a different shade of dark gray and almost flattens out again. I have made many images in which doors move, which create an entirely different type of composition. For now, I wanted to include just one to open up to their possibility.

SOTO  The installations of these two bodies of work are distinct. The images from “Compositions of Light on White” are hung as individual photographs, dispersed with no center along the gallery walls, whereas those in “. . . and to draw a bright white line with light” wrap around the space in diptychs and triptychs along the same center at about the average sight line. How does each series’ composition carry over into its distinct hang in the gallery?

BARTH  By nature of overtly working with geometric composition, the image must be self-contained, so “Compositions of Light on White” exist as individual images. As the edge of the work holds so much importance, it would be lost and destroyed if these images were sequenced. I went as far as using deep, floating frames for these pieces in order to have the shadow of the frame contrast the white of the image and articulate the edge even more. These frames lock the images down and declare them as singular. The installation continues the compositional play onto the wall and the room as whole. The works (none are the same size or format) are not hung on an even center line or spaced at equal intervals. As I did with the “Ground” (1994–95) series, I try to play off the architecture of a particular space. The installation will be different at every place this work is shown. I look at the large rectangle of the wall and try to carry the compositional ideas onto it, and then onto the room as a whole. So a certain image will be balanced by another of a different scale and format, or by a window, corner or doorway in the space.

In the past, I have used sequences to trace time, optical fatigue, retinal memory and melting, fading afterimages. Sometimes the images are just seconds apart, other times they trace the change of light of a single view over the period of a whole year. “…and to draw a bright white line with light” is presented in a collection of segments of varying length. Here the time covered by the entire project is only a few hours. One segment follows the next in a determined order as the line of light grows with the setting of the sun. As the viewer, one stands surrounded by time articulated in light. This series (unlike others, which are circular) has a distinct beginning and end. Included are images of my hand drawing the curtain to change the shape of the line, so we are also watching a long performance. Its duration is determined by the very first appearance of light as it crosses the windowsill, to the end, when the entire frame is taken up by light.

Seeing the same information in repetition so often creates a very contemplative state of mind. Much like Morandi painting the same few bottles and crockery for most of his life, the images become a sort of mantra and allow us to tune in to the subtlest, the most ephemeral information that I am trying to chase down.

SOTO  Your arrangement of the curtains and blinds is made visible in both series, marking an explicit turn in your work—we are left with images of your arm, or your arm’s shadow, as they induce specific light effects. Could you tell me about why you’ve included these pieces?

BARTH  My work has for long been about observation of that which is so easily overlooked. The work is always about visual perception, so it has been important for me not to manipulate the scene. It is clear that this new work could only be made by my intervention. Perhaps I have just discovered a way to make marks with light that fits into my ongoing practice. Not only is this mark-making what motivated the work; I felt I needed to be very honest about it and therefore include images of my arm drawing the curtain or pulling the blinds.