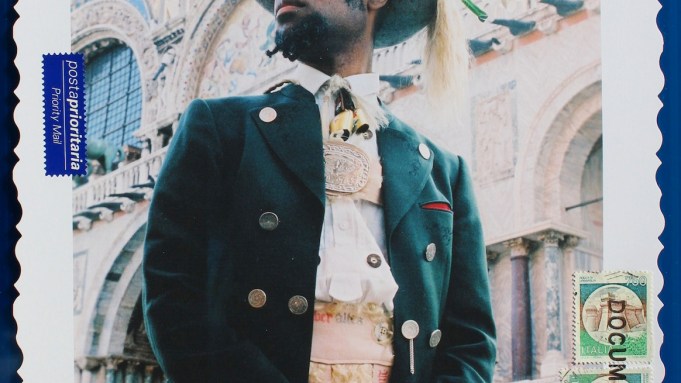 “Radical Presence: Black Performance in Contemporary Art” is not the kind of show you can visit just once. The exhibition’s curator, Valerie Cassel Oliver, recommends at least three visits to experience an exhibition—and a schedule of some 30 live programs—that is meant to be as alive, critical of institutions, and publically engaged as the work it surveys.

Spanning more than 50 years, “Radical Presence” charts a tradition that extends from Benjamin Patterson’s seminal Fluxus event Pond (1962) to Adrian Piper’s “Mythic Being” series of the 1970s, to work made in the last year, including Theaster Gates’s discussion-based performance See, Sit, Sup, Sip, Sing: Holding Court, and an untitled work by Tameka Norris, an intense exploration of the body’s relationship to architectural space.

In her catalogue essay, Oliver argues that the all of the work is grounded in the lineage of black culture, and “occupies the liminal space between black eccentricity and bodacious behavior, between political protest and social criticism.”

Having opened last fall at the Contemporary Arts Museum Houston, where Oliver is senior curator, the exhibition’s New York run is split between New York University’s Grey Art Gallery (through Dec. 7) and the Studio Museum  in Harlem (Nov. 14, 2013-Mar. 9, 2014). A full list of events (including a rare East Coast performance by Patterson on Nov. 12) is available online.

Oliver spoke with A.i.A. by phone as she was heading back to Houston following opening performances of work by Maren Hassinger, Senga Nengudi, and Sur Rodney (Sur) and Hope Sandrow.

WILL SMITH “Radical Presence” features several generations of artists. What kind of trajectory or genealogy are you proposing for contemporary black performance art?

VALERIE CASSEL OLIVER Younger artists working in performance are not working in a vacuum; they’re part of a larger conversation that has its history in the 1950s and ’60s, beginning with a whole constellation of artists around Fluxus. There were forefathers and foremothers to the practices that are being understood and embraced today.

SMITH In your catalogue essay, you describe physical endurance as a recurring element in the show, and certainly you can see that in work such as William Pope.L’s Eating the Wall Street Journal [2000]. What particular resonance does this idea of endurance have in black visual art?

OLIVER It’s huge. The idea of the body, the black body in particular, is so loaded and so complicated. There’s no way to escape it, let’s put it that way. Endurance in this context suggests that you are pushing the body up to and beyond its limits in order to engage various discourses. For Pope.L, it’s the plight of the downtrodden, the people who remain invisible both socially and economically. He’s bringing life to the idea that the body is being burdened. Sherman Fleming in Pretending to Be Rock [1993] questions what the black male body is expected to do in terms of its endurance and its abilities.

SMITH Much the work in the exhibition deals with gender and sexuality alongside race and ethnicity. How do you present those different themes together?

OLIVER Well, I allowed the contributors to the catalogue to really tease those things out. I didn’t set up various thematic sections within the exhibition; I allowed the different generations to speak to one another without creating barriers between them so people could make those connections organically. In the work of artists like Hassinger and Norris, you find that it’s as much about the female body as it is about blackness.

SMITH Performance art is often difficult to contain within institutions. What were some of the challenges of presenting this show in a museum context?

OLIVER I did not want an exhibition full of documentation of what had happened. And work like Satch Hoyt’s Say it Loud [2004] is designed to be activated by the public. There’s also space within the gallery for actions to continuously take place. It was an experiment to do this within an institution—and hats off to the museums we worked with—but I think one that was well worth the effort. I wanted to acknowledge that performance is a practice that is ever-evolving, vital, alive and sometimes resistant to institutionalization.