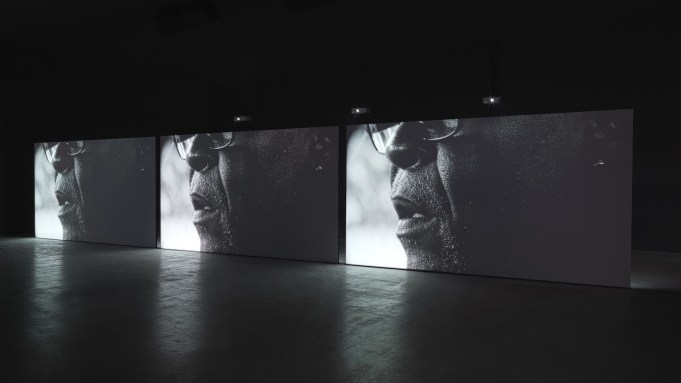 Adam Pendleton is an artist based in New York City and Germantown, N.Y. In his work in various mediums, as Tom Williams wrote in A.i.A. in 2011, “he gives form to a complex exchange between art and racial politics, which the respective histories of these fields so often ignore.”

The centerpiece of his current show at New York’s Pace Gallery (through May 3) is a three-channel video portrait of David Hilliard, 71, who was a founding member of, and served as chief of staff for, the Black Panther Party. Pendleton filmed Hilliard giving a tour of the Oakland, Calif., neighborhoods where the Panther Party formed. The tour includes the site of an Apr. 6, 1968, gunfight between the Panthers and the police, which resulted in the death of Panther treasurer Bobby Hutton.

Also included are a silicone sculpture based on a drawing of the sun by musician Sun Ra and a group of wall-hung sheets of stainless steel that are imprinted with images of the surface of a body of water. Pendleton, 30, spoke to A.i.A. on the phone about the ethics of incompleteness, his visit to Oakland and the meeting of abstraction and representation.

My Education: A Portrait of David Hilliard was born out of another three-channel video installation that I shot in 2009, called BAND. BAND was a re-thinking of Jean-Luc Godard’s [1968] film One Plus One, or Sympathy for the Devil, which combines footage of the Rolling Stones recording their song “Sympathy for the Devil” with images of the Black Panthers. BAND shows the group Deerhoof recording a new song whose lyrics were taken from Godard’s film. I was asked by the San Francisco Museum of Modern Art to do a project for their atrium; since SFMOMA is just across the way from Oakland, where it all started for the Black Panthers, I came up with the idea to make a piece with David Hilliard.

In My Education, when David is not pointing out a site, like where the first Panther office was or where the breakfast program started, I’m asking him questions about himself and his relationship to the Panthers, though you don’t hear my voice. My point of departure was to look at David as an individual now, to see how a very specific history shaped or did not shape the man he is today.

Ultimately, what a successful portrait does is that it presents the impossibility of summarizing who someone is—how any kind of representation is ultimately a conversation with some form of abstraction. Having spent several hours with David and three years working on this piece, I don’t have a view of who he is per se. The piece is about listening, and language and image, so hopefully it moves in many directions at once, and doesn’t present a simplistic view of who David Hilliard is.

The way the piece is edited, you even get multiple views of what he’s talking about, which doesn’t always line up with what you’re looking at. I question the idea of historical fact and representing the truth of anything. Things change, both in terms of personal memory but also our collective consciousness. David became a conceptual vehicle to explore those ideas.

The stainless steel pieces are based on a photograph that was taken of water in about 1929. You get an impression of water, but it’s a fleeting impression.

I’m hesitant to reveal whose photograph the water works are based on. I don’t want to close them off by giving too much information at the moment. I would rather people establish their own relationship to the work before they filter it through the idea of who took the photograph. I want the experience to be more open-ended.

There’s also a sculpture based on an image that Sun Ra drew of the sun. It’s been transformed so that it’s somewhere between a painting and a sculpture, and cast in black silicone.

I’m asking the question, “Can ideas, images and people from different eras inhabit the same moment? How do these images connect?” From Sun Ra to David Hilliard to the water pieces from 1929, in a poetic sense—which is maybe just another way of saying a theoretical sense—there’s a shared conversation amongst these figures.

David occupies a dual position, because he’s representing the past, but the piece is about David now. How does the past filter through the present and relate to a future dynamic?

There’s this notion, and I say it often, of incompleteness as the most ethical mode of representation. Nothing becomes closed off. When the video of David concludes, his hands are moving in space. There’s no definitive ending. It’s about how things continue rather than how things end.

“Chief of staff” is not the kind of language that comes to mind when you think about the Panthers, it’s true. One of the most interesting things to me was the structure of the organization—it was a group of friends. A network of personal relationships gave birth to an organization that ended up having international influence.

One of the most striking moments of the conversation is when David talks about how his friend Huey [Newton] was both his friend and his teacher. When he was reading [Frantz Fanon’s book] The Wretched of the Earth, and Huey said, “What you don’t understand, I’ll teach you.” Hilliard says that the Black Panthers were his education. That fascinated me. It’s about how an idea of community becomes established, in relation to political realities and the realities of friendship. These things are intimately entwined.

—As told to Brian Boucher.