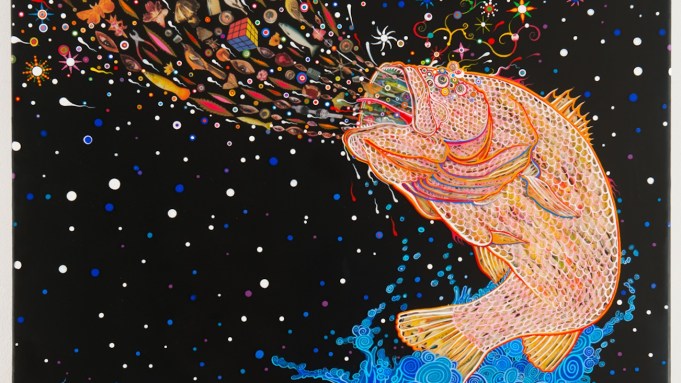 From the beginning of his career in the 1980s, New York-based Fred Tomaselli has created work that explores the ways we escape from reality-recreational drugs and the Internet, to name two. Recently, these investigations have led him to the front page of the New York Times, which he considers another portal to escape. It all started in 2005 with an image of Bernard Ebbers, the former WorldCom chair who was convicted of fraud and conspiracy, over whose face Tomaselli painted an exploding, carnivalesque mask. Ever since, the artist has been integrating the daily paper into his work, adding words, colors and patterns to arrive at tableaux that are by turns heartbreaking and hilarious.

Twenty works from the ongoing Times collage series, as well as nine related new paintings, will be on view in “Current Events,” Tomaselli’s fourth solo exhibition at New York’s James Cohan Gallery (May 1-June 14). Tomaselli recently invited A.i.A. to his studio in the Bushwick section of Brooklyn to discuss, among other things, how his Catholic upbringing influences his practice, and why he keeps on painting in the face of profound doubt.

I’ve been doing these New York Times pieces more in earnest these past few years. I take a subjective perspective and impose it on the allegedly objective world of the Times. I think we all know that it’s pretty subjective as well. I consider myself to be just another editor in this process of filtering the news.

For more than 30 years now, I’ve been investigating the dislocation of reality, and how that’s affected culture, and how that culture then affects us. I started with amusement parks, and mall culture and virtual reality, and then I moved into drugs, and then into the immersive reality of the Internet. I incorporate all of these worlds we can pop in and out of. Even though artists aren’t supposed to deal with escapism, I think escapism is responsible for a lot of the shape we’re in as a culture.

In the exhibition, the difference between the big pictures and the Times series is that with the latter, I can work fast. I can work out my anger over the news. I can talk back to it in my own way. I don’t think it’s effecting any meaningful political change. What I like is that they keep me off balance because each picture has to be dealt with in the particularities-the surrounding context and bylines. So that pushes me in directions I might not have gone. It’s good to keep off balance or else you can go into a comfort zone. That’s the death of an artist.

The sign of the touch was one thing that was missing from the larger works before this show. The final layer of paint and materials were under clear coats of resin. But then I was looking at other paintings, and I could almost see this DNA of an artist’s hand in the brushstroke, and I thought, “This is what I’m missing.” And I decided to leave the final coat of paint on the surface, because they really are intensely handmade.

I’ve read a lot of Susan Sontag in relationship to the suffering of others, and it’s the aestheticization of suffering, or turning other people’s anguish into art, that I really try to avoid. In regard to the Times series, for example, I think of an image I made after the Haitian earthquake, from a photograph in which people were fighting for water. I ended up making this black star that spreads across the whole image. The faces are there, but you can’t read them. When I’m dealing with tragedy, I try to obfuscate the face of the suffering.

I don’t have a lot of Catholic issues. I think I got a lot of good things from being raised Catholic. I went to Catholic school and everything. My relationship to my painting comes out of reliquaries and the Catholic idea of magic objects, like the bones of the saint and the piece of the true cross. Drugs relate to that as well. They are magic things that change your consciousness. Catholicism is wacky, and it’s beautiful, and a lot of the best art and architecture came out of it. It’s not all bad. The new Pope’s not so bad. The religion itself doesn’t really relate to reality.

As for using studio assistants, every artist needs to figure it out for themselves, but I make too many micro decisions and I don’t really know how to job those out. I was talking to Chuck Close about this, and he said, “Why would I want to job out the process? That is the best thing about the art.”

My whole practice is predicated on doubt. Questions like, “What does it mean to make paintings at this particular moment?” I was struggling with all of these questions in the 1980s, and eventually I abandoned painting. To use a Catholic analogy, I had a crisis of faith. [laughs] But slowly and surely painting started re-entering my work. The questions still linger, my doubt still lingers, but I know I couldn’t live without it.

One thing that keeps me going is the fact that my life is enhanced by the work of other artists. I know that whatever questions or issues I have about art can be addressed in the joy I feel in seeing art that I really love.

That joy is still not a good enough reason to make art. The basic reason is that I need to make it, and I love to make it. It’s a struggle. I have bad days; I have crises. I get more pain than pleasure out of the situation-but I guess that’s pretty Catholic too. It really is an act of faith to keep going in the face of doubt. I can’t really rationalize making art, but I do it anyway.

—As told to Brienne Walsh