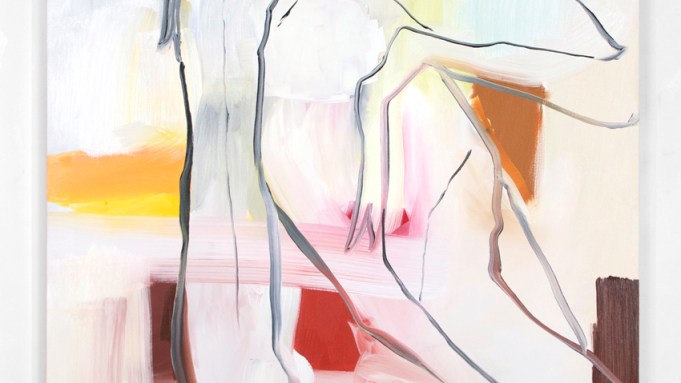 Heather Guertin is an artist, writer and comedian based in Brooklyn. Her solo exhibition “Heand” is on view at Brooklyn’s Interstate through Feb. 15. Here she discusses the questions of selfhood and performance that underlie both painting and comedy.

The first time I thought seriously about the figure of Pierrot was after watching Marcel Carné’s Children of Paradise (1945). I had just started doing stand-up comedy in addition to painting, and at that point I was doing a lot of self-reflection and writing. I related to Pierrot as an emotional vessel exposing intimate desires and weaknesses which are so painfully honest they are misinterpreted as parody for the audience’s enjoyment.

The figures in my paintings, although they sometimes depict a distant variation of Pierrot, are less specific archetypes and are more sub-human. The figures are drawn into and are forming out of the painting’s space. Sometimes they are too large for the canvas and appear to be waiting to walk upright. Or they seem to be emerging from light and thin air. I paint the elemental idea of a person and their struggle to become a fully-realized self in mind and body.

Performing and writing comedy is one way that I stop this journey of self-actualization from becoming too self-involved. It’s not unique to me, after all, and there’s a lot of folly and hubris in finding one’s self. Maybe we’re not even the only species that decides to embody our true selves. Maybe dogs do it. Or at least dolphins probably do.

I paint wet into wet. If a painting starts to get too complicated, I will scrape the whole thing or large parts away and start over. I want the forms and lines to be immediate and direct, a studied spontaneity, like comedy. When you see a good comedian onstage, they look natural, like they are just making up those jokes as they go along. Before I perform I have to practice in front of a mirror. You do it again and again until you can say a joke without being freaked out by your own voice. The more you practice the more natural and spontaneous it seems. That’s old comedy. It’s a little different from improv, but even improv people practice ‘improv-ing.’

I don’t perform on the comedy club circuit; I can’t take it. I’m lucky that I’m invited to perform in art galleries where they let me do whatever weird thing I want. On one level it’s not forgiving to do comedy in galleries because art encourages critical thinking-so, there are a lot of critics in the audience. But in another sense it’s great to do comedy in a gallery because the audience won’t leave. They’ll sit and listen to a silent John Cage piece; you could die onstage and they’d say, “That’s so interesting. She just died-literally just died. It’s awful and I loved it.”

—As told to William S. Smith