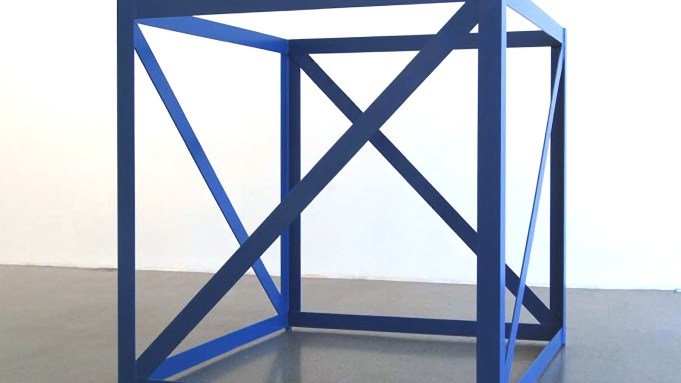 A show opening this week at New York’s Jewish Museum riffs on the groundbreaking 1966 exhibition “Primary Structures: Younger American and British Sculptors” at that same venue. The ’66 exhibition, organized by curator Kynaston McShine, was the first American museum show to focus on Minimalism, and included artists such as Carl Andre, Dan Flavin, Donald Judd and Anne Truitt.

The new exhibition, “Other Primary Structures” (Mar. 14-Aug. 3), expands on the earlier show, presenting art from the ’60s by artists from Latin America, Asia, Africa, the Middle East and Eastern Europe. Among the 30 artists on the roster are Rasheed Araeen, Sérgio Camargo, Willys de Castro, Branko VlahoviÄ?, Susumu Koshimizu, Nobuo Sekine and Lee Ufan. Most of the works on view have never been seen in the U.S.

Jens Hoffmann, the show’s curator and the museum’s deputy director for exhibitions and programs, selected six key works from “Others 1” and discussed what makes them vital to the show.

Rasheed Araeen is important to the history of minimal art on multiple levels, as a curator and editor. Araeen created these minimal works as early as 1960, before or simultaneous to the artists in “Primary Structures.” First Structure uses the cube as motif—something that is formally extremely reduced. There is a relationship between this work and that of artists like Donald Judd and Sol LeWitt.

In the later part of Clark’s career she considered herself a therapist more than an artist. These pieces have a therapeutic quality, in that you have a physical relationship to the artwork and can manipulate them in any number of ways.

This large-scale sculpture existed only as a sketch, but for the exhibition we worked with the artist and her gallery to create it as it was envisioned in 1967. This is the first time the work has ever been realized. The “X” could symbolize a canceling out of the hegemonic narrative we’ve been fed about art history and Minimalism specifically.

Spear is one of two works by this major Polish artist being shown for the first time in the U.S. The spear can be seen as a metaphor for the nature of art—to pierce through and challenge. I am intrigued by works that only hang and are not connected to the wall, floor or ceiling-they are in a moment of suspension.

The Filipino artist is represented by a “bubble machine” that produces foam out of Plexiglas tubes. It speaks to an ephemerality that is not usually associated with Minimal art.

The final gallery contains a scale model of the Jewish Museum as it was in 1966, with a full-scale replica of “Primary Structures” inside—complete with miniature artworks. I wanted to bring people as close as possible to the experience of viewing the show without recreating it exactly. The miniature has a surreal effect, like you are glimpsing a far-off history where you can only just make out the original objects—a physical analogy to the time that has passed.