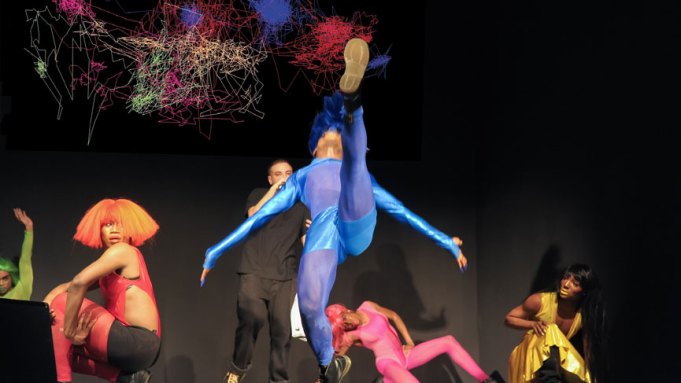 Rashaad Newsome is an artist based in New York City. His performance Five (The Drawing Center) premieres this Thursday, March 6th, at the Drawing Center, where video documentation from previous work FIVE (ARTHK) and five line drawings—produced from that performance using motion-capture software—will be on view from Mar 6th-11th. Here he talks about his relationship to vogue, emerging technologies and underlying rhythmic structures.

“I’m from New Orleans, and vogue is a very East Coast thing. My first time seeing it was at a b-boy party in New Orleans; someone from New York was there and he vogued. When I moved to New York in 2000 I lived in an all black queer collective—by default I met a lot of people in the ballroom scene. I’ve been in the scene since I moved to New York, both in it, but also with a little bit of distance, because I was an artist.

What I was most interested in was the dance and how the dance functions as a language, because it’s essentially a series of poses that communicates something to your opponent, the audience and the judges. I felt like vogue was a part of the black and Latino diaspora that had been coopted very early on in its creation. Most people who come to vogue, like myself even, come to it through Paris is Burning [1990]. That movie, which is great, was also created by someone who was a flaneur to the community, which has a richer history that extends beyond what the film covered. I feel like once the movie came out, vogue was relegated to the conversation about performing gender, but it’s much more layered than that, especially when you hone in on the dance itself.

There are five elements that make up the dance: hand performance, catwalk, duckwalk, floor performance, and spin dips. When you’re seeing it you’re seeing those elements, but you’re also seeing how the person who learned those five elements puts it together, that connective tissue that unites them. It’s like a tumbleweed that keeps growing and re-creating itself. There were so many styles over the years that weren’t celebrated or archived, because, again, most people who come to vogue come to it through Paris is Burning, which starts and ends with New Way, one of the earlier styles. Since then you’ve had Vogue Femme; within Vogue Femme, you have Dramatics, you have Banjee Cunt, you have Soft, and you then have the new styles that the younger kids are creating today. The first time I did FIVE, which was for the Whitney Biennal in 2010, I went into the community and found a practitioner who was very efficient in New Way and someone else who was very efficient in Vogue Femme, and I had them come into the studio and dance. I cut the footage into a dance composition that they were given to study and then perform for the camera. I didn’t use the audio. It left more room for abstraction when you see it outside of the boom boom boom, which I love but think can create a block. Originally, my contribution was going to be only two videos, but they asked me to perform as well, which I thought was the perfect opportunity to take the stage of the biennial and educate my audience about the history of vogue—specifically Vogue Femme—and also employ the community. Because one thing that’s been an issue in the past is that flaneurs come and exploit them and then walk away. Being a veteran of the community, I didn’t want to do that, I wanted to employ the community and give them a voice, and work against how vogue was coopted.

At that time I was thinking about dance and the body, line and language, and how words are a series of lines, so I really started to think about drawing. Using the programming language MaxMSP/Jitter I developed a patch to track the motion of color in real time. I was able to turn the dancer’s bodies into pens and pencils and make these drawings, which challenged the ephemeral nature of performance and documented the event in a more abstract way than video or photography.

With this new performance I’ve rewrote the patch and, instead of a video camera, I’m using a Kinect, a motion-capture device that has infrared sensors and a microchip that understands depth. Because the Kinect can recognize the human body I’m not reliant on color or a neutral background for the dancers to register, which gives me a lot of flexibility. I’m able to focus on specific parts of the body. If you just track the entire body, you’re not getting the full extent of what the dance is doing. For instance, one of the elements is hand performance, and by using the Kinect I can really just track the hands. Also, using the Kinect I can actually capture 3D data. These drawings will exist as sculptures later. They’ll be quite massive, because they’re replicating a dance performance that obviously takes up a lot of space, and hopefully they’ll be in traditional materials like bronze or glass. I like the idea of this feminine gesture producing this very masculine sculpture. A different approach to Richard Serra and all of those guys.

FIVE unites all of these different elements under a rhythmic structure, which is something I’m taking from John Cage and Merce Cunningham. To break down the five elements of vogue I’m working with five different dancers, each one creating a dance sequence based on that particular element, and then musicians who I feel like play instruments that sonically mirror what performers are doing visually: flute, violin, electric guitar, saxophone and drums. To kind of play with this whole idea of “high” and “low,” too, I’m bringing in Stephanos Koroneos, who’s an amazing opera singer, but then I counteract him with Kevin Jz Prodigy, who is the equivalent of that in the vogue community. I’m thinking about battling, because they’re all working off of the rhythmic structure and it becomes a bit of a battle—Stephanos is battling for his position, Kevin is battling, the musicians are battling, and the performers are battling. It’s this big mashup, but somehow through the notion of the rhythmic structure it becomes really harmonious.”

–    —As told to Matthew Shen Goodman