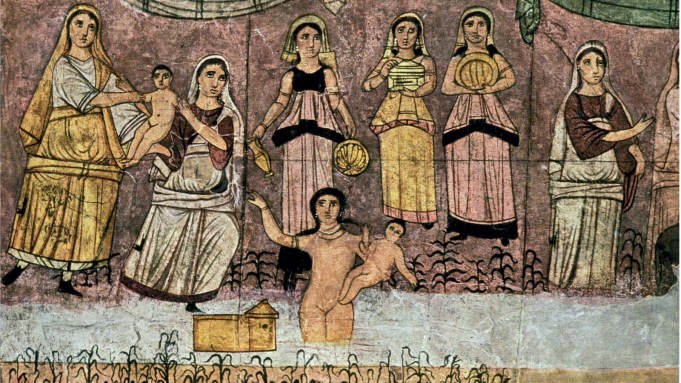 Professor of art history and history at New York’s Columbia University and prolific author and television commentator, Simon Schama has published a monumental new account of Jewish history in two volumes, with an accompanying five-part documentary on the BBC and PBS. The first volume, The Story of the Jews: Finding the Words 1000 BC-1492 AD, was released last month. The second, When Words Fail: 1492-Present, is due out this fall from Ecco. He talked to A.i.A. recently about the Jewish tradition of visual imagery, locating “Jewishness” in Mark Rothko, and the idea that beauty itself can be a mitzvah.

The Jewish representational urge is extremely profound. It’s quite clear from a big sheaf of evidence that historically one didn’t think of designing a synagogue without spectacular representational decoration on the floor. A floor mosaic always had to represent the memory of the destroyed temple. There were huge elastic rubrics under which you could do whatever embellishments your local artistic tradition bid you to do. But all the synagogues make it clear that everybody stands or sits around the perimeter and doesn’t stand on the images. Jews are actually contemplating the images while at their devotions.

The worship of the human body as a kind of physical emanation of a celestial ideal is definitely not Jewish. Even though in at least one mosaic there are some bling-y calendar girls, as I slightly vulgarly call them in my book, and there’s an occasional naked body on a colophon page, these are not Greek-derived aesthetics of the perfection of the human body.

What is part of the tradition is the relationship between word and image.  Often these floors have quotes from the Bible and names of donors. The play between what constitutes an image and what can be created out of letters is wonderful really, and deeply postmodern.

I’m not sure that Jewish visual imagery is unique. The boundaries are so elastic. Was Rothko a Jewish artist or wasn’t he? Rothko was a Hebrew teacher; but was he hugely interested in Judaism? It was thought that he wasn’t until lots of his surviving students from the cheder [a Jewish elementary school] in Brooklyn said he was the most wonderful teacher that ever was. We know that onto his canvases of shimmering veils and scrims of color, all this classical history and spirituality was enormously projected, so who is to say?

What you can say is that one of the places the Jewish image instinct has always been and goes is kabbalah. And when it becomes hasidism it’s all about dreams! There is this sense of marvels and wonders and a miraculous dwelling amidst the profane and the quotidian that’s better than Surrealism because it’s not as aridly cute as Surrealism. Figures like Marc Chagall wanted to exist partly in a lyric dream world. Think of the 20th-century painter Chaim Soutine’s crumpled and distorted little French villages twisted and thrown up in the air and brought back down again in a kind of disturbed expressionist heap. You can’t not feel that’s out of a Jewish tradition.

Jews are in this wrestling match of brothers between the world of the word and the world of the image. These aren’t mutually exclusive. Marc Chagall is either loved or hated for being so literary. Poor old R.B. Kitaj was absolutely destroyed by this. He’s so wordy and so literary that he was accused of being a crap painter! Compared to who exactly? Tracey Emin? Kitaj did become mad and paranoid, but as another speaker in my television documentary said, the Jewish imagination is paranoia confirmed by history. I remember when Kitaj was attacked because there was a show at the Hayward Gallery full not of Jewish images but of Dante and Chaucer. It was full of text, and the images were all allusively about the text. Today this would be the most cutely postmodernist thing you could conceivably do! But then it was thought a great scandal against the purity of what modernism was really about. Kitaj was a real martyr to the idea that wordy art is not art. But, hello, Jenny Holzer is! I don’t quite get that. I don’t know if she’s Jewish or not.

Beauty can be a mitzvah. Physical beauty as well as the beauty of the word is an ornament to devotion to God and there is a certain sense that you are allowed occasionally the consolation of beauty. Most ultra-orthodox synagogues are brazenly plain if not ugly. Many are aggressively simple because nothing should distract from the intensity of your devotions. But that’s a minority view.  There was nothing unorthodox about the great synagogue that was opened in Amsterdam in 1675, and it is just absolutely stunning.

This isn’t unlike the Orthodox separation of women during prayer. There’s scant evidence that women were separated before Muslim forces invaded the Iberian Peninsula, and it’s completely unconvincing to me. The separation was a response to a slightly fiercer and more ascetic Islamic view. I grew up in an Orthodox tradition where women were in the gallery. We liked that actually because it was much more alluring and much more distracting to have them up there. As teenagers slightly out of control, we were constantly sneaking looks at these gorgeous girls, all dolled up to the nines!

—As told to Tracy Zwick