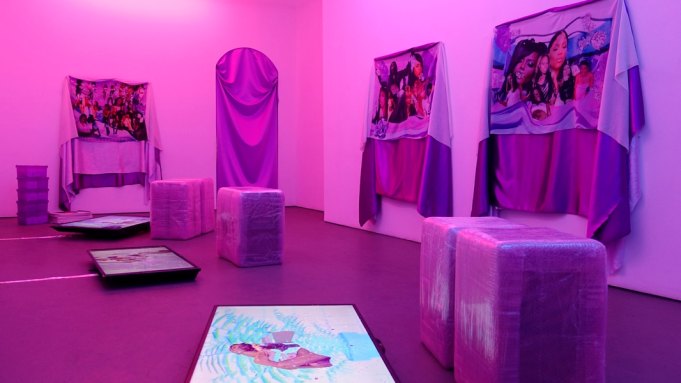 Is there a kind of unassailable emotional knowledge in fantasy? On their debut album fantasii, Philadelphia-based artist E. Jane (performing and recording as alter ego Mhysa) explores fantasy as a technology for creating livable futures that the anti-black logic of the present would otherwise deem impossible. Where Jane’s visual work engages with the political in a rigorously intellectual register, Mhysa is primarily guided through the world by way of feeling, and much more interested in nightclubs than art institutions. The latter persona builds fantasii from a mixture of clanging club beats, luxuriant dissonance, and candidly vulnerable language. These might be thought of as field recordings from “the land of NOPE,” which Jane describes in their manifesto as an environment beyond the colonial gaze.

Jane’s solo show “Lavendra” at Brooklyn gallery American Medium earlier this year was an ode to black joy, and to the black diva as she appeared in ’90s R&B music videos. Fantasii builds on these themes by referencing an intergenerational cast of characters ranging from Harriet Tubman to Donna Summer and 86-year-old jewel thief Doris Payne. Jane channels their artistry, thought, and emotion in an exploration of the potentialities of waywardness and ethos of the larger-than-life. Fantasii shirks the violent construction of morality in part through its conceptual grounding in Afro-Pessimism, which understands blackness not as an identity conceivable in humanist terms, but an expendable commodity produced by gratuitous violence and constitutively positioned outside of the category of the “human.” I spoke with Jane over Skype and email about their new album, which was released by Halcyon Veil on July 21.

ALEXANDER IADAROLA  Were there any formative moments that set fantasii on its course?

E. JANE  I saw the Afro-Pessimist theorist Saidiya Hartman speak at Princeton and she gave a talk on Mattie, a black woman who lived in New York in the early twentieth century, who Hartman learned about through court records. Mattie had been charged with prostitution. Hartman told Mattie’s story from Mattie’s perspective, describing her life in third person in a speculative account where Mattie is the narrative’s protagonist, instead of letting the court cases be the final word on her life.

After the lecture, I asked Hartman about the refusal of shame and she said it related to utopian political demands-demands that are “impractical, wild, untenable within our current political imaginary, perhaps.”

IADAROLA  You and Hartman are both concerned with the archive and writing counter-histories. Along these lines, fantasii almost feels like an archive of the black diva, which is something you also explored in “Lavendra.”

In the clip it seems like the reporter is frustrated with how flippant she’s being about getting out of prison and being a renowned jewel thief. What she’s saying is actually deeply Afro-Pessimist: “There are worse things than being a thief.” Well, what did America do to black people? Isn’t that worse than any robbery? Think about how much labor was stolen from us. What’s a diamond compared to that? People don’t know what Payne had to do to survive but they want her to feel ashamed.

When I was starting to work on “Lavendra,” people told me I couldn’t make the work unless I critiqued the women. But I don’t have to critique them. I have to understand them and try to see things from their perspective, because that’s what isn’t done.

IADAROLA  How would you define a black diva? Do you think of Doris Payne as a diva?

JANE  The term diva dates back to the nineteenth century and was initially used to describe a principal singer in the opera. It is often used pejoratively, to suggest that a woman takes herself more seriously than she does her profession. I believe that usage is rooted in misogyny.

The black diva is a slave-descendant R&B singer who gives the performance her all and devotes her life to the craft of music. The black diva, like all divas, is also a powerful woman in her knowledge, success, and drive. This makes her threatening as her amount of power disrupts expectations of women.

I do not see Doris Payne as a diva, since she is not a singer but I do see her as a cunning black woman with self-conviction.

IADAROLA  In the press text you said fantasii was like a “reverse Dante’s Inferno.” Can you say more about that?

JANE  For the album’s narrative I imagined different scenes playing throughout the protagonist’s life as they run away from home, get mixed up in the club scene, and go through all these wayward sexual relationships.

The reason why I called it a reverse Dante’s Inferno is because it’s not moralized. Fantasii is not about waywardness as badness. It’s waywardness as liberation or waywardness as just a search for peace. In the album I’m imagining there is something to be done. Harriet Tubman could fight, and “Minty’s Interlude” samples dialogue between Harriet Tubman and a slave catcher from the TV show “Underground.” I’m calling on the strength of Harriet Tubman in that moment. In this fantasy space, I can find the strength to fight a racist instead of feeling helpless and scared, which is how I feel most of the time.

This society is already bent on misogynoir—the violence, disrespect, and disregard of black women. I’m going to be chasing respect for my whole life and I may never actually get anything that I want. How do you dream when all you’re worried about is what other people think? How do you have fantasies if you’re afraid to fantasize because of what god, your parents, or your community might think? On fantasii, Doris Payne becomes a hero. She is a thief, she is a fugitive. It’s important for me to connect her and Harriet Tubman as fugitive figures and understand that they are equally as powerful and heroic as Beyoncé. On the album I’m putting them all together, as women fighting for their agency and autonomy. Doris Payne is leading the charge and not giving a fuck.

IADAROLA  You have said that this record is about strengthening the black spirit and there’s a very powerful kind of solidarity here between people that aren’t physically in the same room, from Harriet Tubman to Carrie Mae Weems and Beyoncé.

JANE  This is an anti-respectable album. The album isn’t about respecting certain black women and shaming others. No black woman is shamed. My goal is to understand and love black women. In my [NOPE] manifesto I said we need culture that loves us. I really wanted the album to be something that was loving of all black women. I’m trying to write the history from a place of understanding, not from judgment or anthropology. That’s why it’s also important for me to perform and be my own diva. Mhysa was an important persona for me to create because I think there’s something about living the experience that changes your perspective of the diva.

IADAROLA  Much of your current work seems to directly relate to multidisciplinary theorist Tina Campt’s quote on your website about black feminist futurity, which she defines as the “performance of a future that hasn’t yet happened, but must.”

JANE  Definitely. A lot of the work I do is fantasizing things into reality that otherwise might not necessarily exist because the dominant popular imaginary doesn’t want them to exist.

I think that Tina Campt quote was the thing that kept me going. She’s basically saying that logic doesn’t matter as much as what I need, what I have to have to survive, and I’m going to fight for my survival. I have a tattoo of an Audre Lorde quote that says, “We were never meant to survive,” from her poem, “A Litany for Survival.” In the full quote she writes: “it’s better to speak remembering we were never meant to survive.”

Like Campt, Lorde is saying that black existence is a logical impossibility. Once we were no longer useful as slaves, what was our purpose? And when we were slaves, we were not human. So our very existence as humans, as nuanced flesh and blood, is a reality that was never supposed to be. And that’s the place where I start making everything else that some people say I shouldn’t be. I think both of those ideas are pushing toward that making inside of a place that feels impossible because it just has to be possible if things are to change.

You can’t take that away from us in the worlds that I create. That’s very important to me and that’s probably also why I named the album fantasii: because if you say that this is reality, everyone’s going to tell you it’s not true. But if you take it to a place of fantasy, what can you tell me is not true about my fantasies?