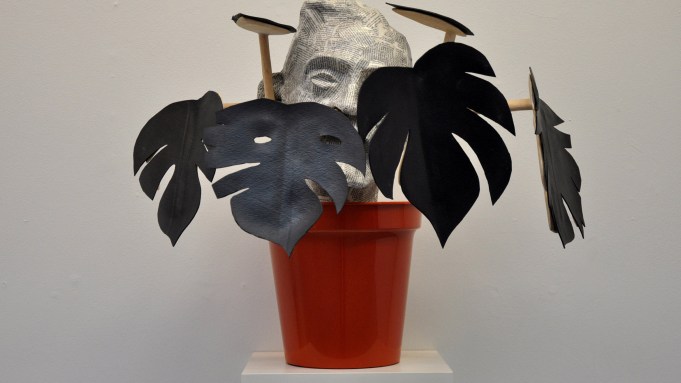 It has been a busy year for Koyo Kouoh, and any respite seems inconceivable for the Senegal-based curator. Activity at RAW Material Company, the arts center she directs in Dakar, is currently on a nine-month hiatus, but Kouoh is caught up in other projects, such as the program of talks for the 1:54 Contemporary African Art Fairs in London and New York and “Saving Bruce Lee: African and Arab Cinema in the Era of Soviet Cultural Diplomacy,” a research project undertaken in collaboration with film curator Rasha Salti for the Garage Museum of Contemporary Art in Moscow. Kouoh and I spoke as she was making final preparations for EVA International: Ireland’s Biennial of Contemporary Art. She is the curator of the biennial’s 37th edition, which runs from April 16 to July 17 in Limerick.

Kouoh, who was born in Cameroon, studied business administration in Europe before moving into the creative sector. She was driven by an urgent need to contribute to a greater awareness of contemporary art coming out of Africa. Artistic output tended to be framed as marginal, she felt, while a variety of new artistic languages and forms were not finding as much expression as they could within Africa. “I really believe that artistic and intellectual enquiry are fundamental for any society,” Kouoh said, “and in Africa these have not been drawn to their full potential.” In our conversation Kouoh repeatedly referred to Africa as a whole, calling attention to the power of the continent. “I am a pan-Africanist,” she laughed. “I like to think that I belong to the entire place and the entire place belongs to me.”

Kouoh moved to Senegal in 1996 and set up RAW Material Company in Dakar in 2008. She chose the location because the Senegalese capital has a vibrant arts scene with commercial galleries and institutions such as Galerie Le Manège, Galerie Nationale d’Art, Leopold Sedar Senghor Galerie Arte, and Kër Thiossane, as well as events like the Dak’Art biennial. The country also has an important cultural and intellectual heritage: poet Léopold Sédar Senghor, cofounder of the Négritude movement, was the first president of Senegal after it won independence from France in 1960, and Dakar University has for decades been educating Francophone African leaders. Senegal is also a politically stable country, which “means a lot in Africa,” Kouoh said. RAW Material Company, billed a center for art, knowledge, and society, started as an itinerant organization, but it has had a fixed venue since 2011. “I always wanted RAW to be that space where people come to deal with art in a reflective way… [art as] a thinking system of its own, independent of all borrowings from other disciplines,” she said.

The center has been closed since September, and the break will last until June. In light of the increased global interest in contemporary art emerging from Africa, a phenomenon to which RAW Material Company contributed considerably, Kouoh felt that it was time to reframe RAW’s entire program in relation to local needs. In the future, the center will serve as an experimental school, nurturing the group she sees as most at risk–young artists, aspiring curators, and cultural producers. Studying art in Senegal is a working-class career; those with means are likely to study in Paris or New York instead. The art school in Dakar, like those in Uganda and in the Côte d’Ivoire, is long established, and pursues a traditional curriculum of drawing, painting, and sculpture, which leaves students ill-prepared for participation in the global art scene. “They don’t have art history, which is fundamental. They don’t have political history, they don’t have philosophy, they don’t have research practice or critical theory,” Kouoh said. “They don’t have languages. Mladen StilinoviÄ? said it: If you don’t speak English, you’re not an artist! And all of this is visible in the art that is made. Much as I actively promote contemporary art made in Africa, I am one if its fiercest critics.” What RAW Material Company can offer these young artists is “de-schooling.” “You realize after going through a program that you didn’t learn what you need to learn,” Kouoh said. “Practice shows you what knowledge you need to acquire.”

She attributes 1:54 with immense importance for the growth she feels is required in African art. Established in 2013 by businesswoman Touria El Glaoui, the art fair has taken place in London every year since, running parallel with Frieze Art Fair. A New York edition debuted last year. The fair has grown apace, hosting galleries for which it is a lifeline. These are small galleries that take a big risk participating in an international fair. Kouoh is on the selection committee, and curates the Forum, a program of talks. “It is a comprehensive symposium that forms the analytical basis on which 1:54 is grounded,” Kouoh said. “We always tackle significant cultural, historical, and contemporary political issues head on. Dealing with the idea of Africa in general, or the role of art, we have discussed diasporic trajectories in the context of global black subjectivities. We have discussed the situation of black British artists—the framework and the emergence of an Afropolitan consciousness, for example.”

But Kouoh’s attention is presently occupied by EVA. Ireland’s biennial began as the Exhibition of Visual Art in 1977, but what was once a competitive show of regional artists became first a national exhibition, then an international biennial, with a roster of curators that includes Brian O’Doherty (1980), Rudi Fuchs (1985), Saskia Bos (1990), and Hou Hanru (2008). Kouoh’s edition is titled “Still (the) Barbarians.” As she writes in her statement of intent, the exhibition “will investigate the post-colonial condition of Ireland as a point of departure from where artistic reflections, critical redefinitions, and political transformations are articulated.”

Even if 2016 were not the centenary of the Easter Rising, a key point in the process of Irish independence, Kouoh would have created a biennial about postcolonialism. She said that she has long been drawn to Ireland’s position and condition as a case study of colonial enterprise. “Ireland has been the test ground for every kind of submission, exploitation that Britain later applied on a global scale,” Kouoh said. “Every fiber of social organization, linguistic, as well as political and religious, carries the scars of this domination.”

The exhibition’s title is inspired by Constantine P. Cavafy’s poem “Waiting for the Barbarians,” which imagines barbarians as a liberating force. Kouoh’s title, with its parenthetical “the,” allows for multiple readings. “This possibility of forward and backward shows the complexity of human life—it’s not accusatory, it’s not about victimization,” she said. “It’s just a demonstration of the complexity of togetherness.”

Speaking of Ireland in relation to colonialism brings up another irony: Irish missionaries disseminated Christianity throughout the world, thus participating in the forcible implementation of a foreign system of belief. Kouoh delights in this contradiction. “That accounts for this title; there are so many things you can reverse,” she said. “Victims become perpetrators—it’s a cycle of things that puts you on one side or the other.”

Kouoh’s list of fifty-two artists includes Irish figures such as Alan Phelan and Alice Maher alongside international stars like Kader Attia and Liam Gillick and Africans Abdoulaye Konaté and Tracey Rose. The exhibition, she said, will “look at physicality, at poetry, at language not as poetry or literature but as a feature of social and cultural identity. The Gaeltacht [areas where the Irish language is the vernacular], for example, is a social and political issue in Ireland.”

As our conversation drew to a close, I asked Kouoh about her role as a curator determined to resist homogenizing influences in an increasingly globalized art world. She believes that contemporary art has made people aware of the world beyond Europe and America. “Geographies are just as important as certain aesthetics. My work is very much informed by geography without being geographical. Background, situation, and location are important in relation to the rest of the world,” Kouoh said. “We have to deal with our past in the present in order to build our future. We cannot exonerate ourselves from the past. It continues to shape our present time, considerably.”