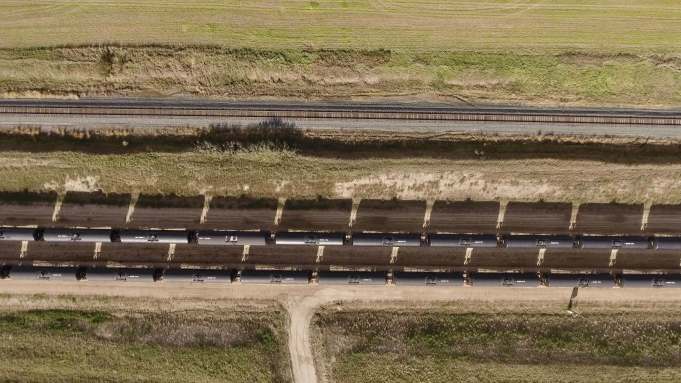 On October 12, Artists Space in Manhattan hosted “Without Us There Is No You,” a launch event for A.i.A’s October issue on contemporary Indigenous art. The curatorial duo Maria Hupfield and Jason Lujan, aka Native Art Department International, curated a screening of works by Indigenous artists. They were later joined in a conversation by author and University of Delaware assistant professor Jessica L. Horton, who contributed an article to the issue on media art and environmental activism. The videos on the program were: Ginger Dunnill, Dylan McLaughlin, Cannupa Hanska Luger, In Transition Is the Most Honest. CauseLines (2017); Indigenous Media Rising (Jade Begay), Bayou Bridge Pipeline—The Tail End of the Black Snake (2016); Caroline Monnet, Mobilize (2015); Sterlin Harjo, Ordinary Human Being (2017); Sky Hopinka, Anti-Objects, or Space Without Path or Boundary (2017); and Sm Åoodm ‘Nüüsm (Mique’l Dangeli) and Tim-kyo’o’hl Hayats’kw (Nick Dangeli), Aks Gyigyiinwaxl (Water Prayer), 2016. All the works shown address struggles for self-determination and land rights in Indigenous communities in the face of climate change, particularly in relation to the protests against the Dakota Access Pipeline near the Standing Rock Reservation. Below is an edited transcript of the discussion.

JASON LUJAN  We were asked to select work related to Indigenous activism and Land art. In making our choices, we were thinking about how current these videos are. Most of them were finished only a few days ago. The first video, CauseLines, was finished Sunday night. Jessica highlights the Winter Count art collective in her article, and this work is by the founding members. It’s almost an update of what she wrote about.

JESSICA L. HORTON  That’s very true. CauseLines is the second in what I imagine is going to be a series of collaborative works from Winter Count, which formed in the fall of 2016 as a creative response to the mobilization against the Dakota Access Pipeline. All these videos bear out that the global media coverage of Standing Rock crystallized a much longer story-the Indigenous resistance, the struggle over land rights and ecological devastation writ large.

This spring I taught a course on the art history of the environmental movement. The semester began right after Trump issued the final permit for the Dakota Access Pipeline, so I wanted to introduce a work that would immediately put the relationship between colonialism, capitalism, and climate change into my students’ minds. Winter Count’s first video, We Are in Crisis, did that in a really interesting way. Like CauseLines, it features appropriated drone footage. Drones are a military-industrial technology designed to surveil, target, and kill usually non-white bodies. So what does it mean to take that footage and recontextualize it? As you saw today, the makers added songs and stories. For me, that clarifies something that all these videos do. They critique colonization and the devastation it causes to land and people, but they also suggest that there has to be something more. They ask how we can reinvest, creatively and critically, in alternative ways of being. They ask how we can inhabit a world that is shaped by colonization but is not reducible to it.

MARIA HUPFIELD  In putting together this program, which involved thinking about Jessica’s article and the works she mentioned, we wanted to convey that a lot has happened since Standing Rock. We talked with the artists about some of the developments. Sterlin Harjo was at Standing Rock and took a lot of footage, then later reflected on the idea of the human. So we considered how we could make the story accessible and open it up, make it more than just an Indian issue.

LUJAN  Maria and I were concerned about the emphasis on the rural. We’re in New York City, so we tried to find videos that speak to an urban setting as well. Everything that Jessica just mentioned about colonization and taking the resources is also happening in urban spaces. The problem isn’t necessarily about extracting stuff from the ground, but it is a very relatable experience for anyone who lives in New York or other large urban centers.

HUPFIELD  When I look at the videos again, particularly the ones by Sky Hopinka and the Dangelis, I’m reminded of the time that goes into things, how foreign the Native languages spoken in them sound, and all the effort that has to be given to cultural revitalization and linguistic revitalization. These films speak to the acts of generosity that we have to impart to each other in order to reach a place of understanding and connection.

HORTON  One thing I was struck by-and this relates to your urban comment-is how important movement is as both a theme and an aesthetic mode in all of these videos. It doesn’t matter whether the movement results from a shaky handheld camera following bodies moving through the land, or whether it’s from shooting on a boat in water or while riding the “iron steed,” as the man calls his bicycle in Sterlin Harjo’s film. The works all highlight how forms of movement are politically and culturally very different. There are forced displacements of colonization that link climate refugees to the Trail of Tears, which is a point made strongly in the Bayou Bridge video. But movement can also be a way of connecting people and places-through the wandering that happens in Sky Hopinka’s Anti-Objects, for instance, or through the migrations from northern regions to southern Canada in Caroline Monnet’s Mobilize.

LUJAN  You can see that in footage from forty years ago in Mobilize.

HUPFIELD  The final video [Aks Gyigyiinwaxl (Water Prayer)] was a kind of prayer made in collaboration between a mother and a son, and it worked around language and water. So, for me, that was a nice place to end everything.

HUPFIELD  I haven’t really thought so specifically about sovereignty in that way for the videos this evening. Each of the works is specific to the people and the nations they’re coming from. We’re not seeing a pan-Indian approach, we’re seeing very specific individuals and nations. In the case of Winter Count, the collective has both Indigenous and non-Indigenous members. It’s multi-racial. So sovereignty can mean that there’s a strong sense of who people are and where they’re coming from.

HORTON  There’s also that expansive sense of generosity, the irreducible connections that still happen across borders. Sometimes ecological conversations can go too far into the language of cosmic prayer, and seem to wrap the world into a seamless set of interconnections. I think sovereignty necessarily puts a boundary around that. It says, no, there have to be spaces for cultural and political difference, especially in places continually under the onslaught of colonization, which is not over. It’s a lot to ask of a particular artwork to do all of that at once. I think the generosity of these films came through in a really strong way, whatever the differences among them.