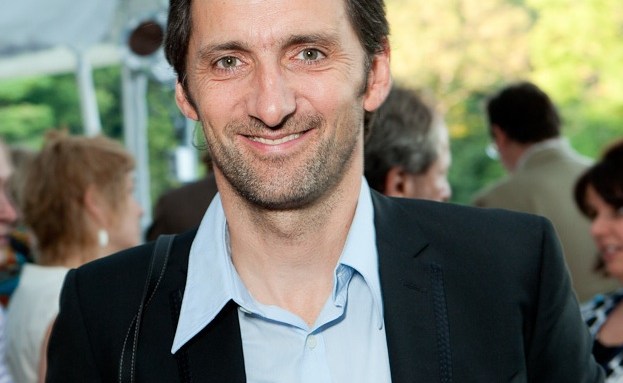 Following a well-received installation of recent sculpture at Versailles last year, Lyon-born, Paris-based artist Xavier Veilhan was invited to the U.S. this summer to present a similar showing—on a much smaller scale—at The Mount, Edith Wharton’s landmark estate (which she designed and built in 1902) and museum in Lenox, Mass. “Interacting with History: Xavier Veilhan at The Mount,” on view through October 31, features eight indoor installations by Veilhan in various mediums. Some of the pieces are somewhat hidden in the elegant mansion: in small alcoves, a staircase window or the upstairs bathroom. For instance, one small, striking sculpture, Amish Vibration (2009), occupies an empty early Twentieth-Century icebox, to quite jarring effect.

The show provides an intriguing overview of Veilhan’s recent works, and a fine occasion to re-visit the extraordinary location. While in New York City en route to the Berkshires for the show’s opening, the artist visited Art in America magazine’s managing editor, David Ebony, to talk about some recent projects and preoccupations.

DAVID EBONY: In the news pages of the June-July issue of Art in America, there’s a reproduction of your sculpture Vibration, which comprises a very shaky-looking horse and wagon, shown at this summer’s World Expo in Shanghai. What was it like participating in that exhibition?

XAVIER VEILHAN: There were difficulties getting things shipped to China, so we wound up fabricating the piece there. It was all kind of crazy. Shanghai is interesting, but it’s maybe better for business than for art. I think Beijing is better for art. Beijing’s art district looks like SoHo 15 years ago. It’s interesting because you’re aware that what you are seeing at this moment is about to disappear forever. It’s all changing so fast.

EBONY: What’s your studio like? How have you arranged it to accommodate international demand?

VEILHAN: I have a new studio in Paris-well, not so new, I moved a few years ago. It’s quite a bit larger. There’s a large workbench. I hired two designer-friends and they built the studio around the workbench. I can get more people in and they understand much more what my work is about, because they can actually see it and not have to get the idea from computer images. It has completely changed my life. I am basically a studio person. I’m also part of a team, but I need to make things myself. There’s a conceptual aspect to my work, and I do have assistants, but if I want to have a challenge or a breakthrough, I have to make the piece myself. There’s Marcel Duchamp, who didn’t make anything; and then there’s Picasso, of course. I guess I’m more like Picasso [LAUGHS].

EBONY: Your recent work has a very high-tech look. Do you design on the computer, and how have your methods changed?

VEILHAN. It’s funny: So many people call me for computer tips. But I’m the worst with the computer. I like to connect high-tech things with very practical and simple things that have always existed, that’s all. My work is about dealing with physical forces in the real world, and not so much about computer languages.

EBONY: The first works of yours I saw, in the mid 1990s, were large digital photo pieces that had a kind of eccentric historicism. They offered a strange look at ancient civilizations, maybe, with figures engaged in rituals in Babylon or some other exotic place. How did the photo works evolve to the more recent sculptures and installations?

VEILHAN: Sometimes I think of two-dimensional pieces like the skin of the sculptures. In many of the 3-D works, there’s only the silhouette. For instance, if you cross someone walking down Broadway, you don’t really remember the eyes or the details of the features. What you recognize and remember is the person’s attitude and movement, the general shape of the figure. Sculpture captures this better than photography. Photography or painting is better for capturing details of the surface.

EBONY: It seems to me that you are exploring, especially in the recent work, perception.

VEILHAN: I’m most interested in trying to capture energy, and transform it into something that is my own vision. I work with pixelization, reduction of definition, distortion, fractals, facets and the like, things people are already familiar with in everyday experience in the digital age. I’m just stressing something that already exists. I’m not inventing a language, just using constructs already in place, and which are quite universal. It’s kind of a Warholian approach to technology. I’m thinking a lot about Warhol at the moment.

EBONY: I think of your recent works as moving into another field of, maybe less related to Pop art. In the sculptures, I see a big influence of Futurism and Cubism.

VEILHAN: I am fascinated with the early Twentieth Century because of the dynamic that was brought to art with the development of machines—the cars, airplanes and machine guns. A new kind of vision developed

then. It affected the art. There’s no longer the romanticism of Caspar David Friedrich, for example. And what’s interesting about that period is the new approach to art linked to science, especially since 1905.

EBONY: The year of Einstein’s Theory of Relativity.

VEILHAN: Yes. In the time of Cubism and Futurism, there was this realization that everything’s always moving, and falling. Not falling apart, but falling toward something else. Art had to adapt to this idea. I’m very much into physics. Not that I understand all that much. I enjoy reading about it. You get this idea of the great complexity of the world. One of the reasons why I’m an artist is to try to achieve some sort of harmony from the complexity of the world. I’m thinking of Warhol again, his “Shadows” paintings. PHOTO BY ERIC KORENMAN

VEILHAN: The difficulty with his work is that it depends too much on context. When I saw a show of his in an intimate space in Berlin, the work seemed really intense. But then in New York at Gagosian in Chelsea, it all looked too kind of posh. He’s an extremely gifted artist, and some of the work is impressive, like the large foil pieces in the Plexiglas boxes. But I don’t see much of a connection. But we were just in a show together in Munich, so maybe others see a connection.

EBONY: I was thinking of Reyle’s work in relation to yours as a move away from Pop art, not necessarily toward a new kind of formalism, but as a way to push toward some new vision that incorporates—and maybe in the process, filters and edits—what we’ve learned from Pop art and mass media. There’s also a kind of critique, if not a send-up of formalist ideas from the 1960s and ’70s.

VEILHAN: I’m closer to artists like John Tremblay and John Armleder. I’m a big fan of Armleder’s work. I think he’s underappreciated. I also feel close to artists like Sherrie Levine and Cady Noland. For me, and some artists of my generation, it’s not a problem to extend the possibilities of Pop art by using minimalism and conceptualism. We don’t see them as opposites, or in conflict. It has to do with understanding that art is not just a visual experience, but also physical. It’s both. Like riding a motorcycle or a speedboat, it’s visual as well as physical.

EBONY: Speaking of speedboats, tell me about the The Blue Boat you designed recently. I just saw images of it on the Internet.

VEILHAN: I was approached by a boat construction company [RAL], to do a commission. They wanted a sculpture. But I had always wanted to design a speedboat, and so they agreed to that. It was made in Austria. I made a model and they said it’s a great model, but it’s really a sailboat. So I had to rethink the shape. I used an existing speedboat construction and wound up designing everything that is not underwater. The material’s interesting—a shiny resin, but not with a metallic kind of sheen. It’s a dense, sold blue. It also relates to a film I’ve made, Furtivo (2008); it’s about 30 minutes long and with music by Sébastien Tellier. I’m just starting to show it now. In it, somebody’s making drawings of sailboats. Things moving in the film, like cars and boats, are already sculptures. There’s a racecar sequence, which we shot at the Lingotto in Turin, the Fiat headquarters that’s now a kind of huge mall. I went to the Lingotto for a show I had at the Pinacoteca, the museum at the top floor of the building. We took lots of pictures of the building and eventually went back to shoot the film. It has a very Latin feeling about it, I think.

EBONY: I want to ask you about the exhibition at the Mount. What are you showing there?

VEILHAN: It’s a show using pieces that are already in US collections. Most of them are small.

VEILHAN: No. The idea came from Versailles, but it’s much smaller. The house is not grandiose like Versailles, it’s more intimate, and there’s only one piece per room, and not in every room. What’s interesting for me at The Mount is the house, and Edith Wharton. She wrote a lot in bed, and some of her famous books were written in the bedroom. So I installed one of my mobiles, with black globes in that room. It’s about the energy that was generated in that space. I’m interested in how this woman developed her art against society in a way.

EBONY: Are there videos?

VEILHAN: There’s a video piece in one of the bathrooms. There’s a difficulty in showing videos in historical places. At other sites, I’ve installed the light machines I’ve made, which are very low definition moving pictures. I’m using a very low-tech device, more like the idea of a fireplace to light the space, not like a movie. It’s a metaphor for the physical and the visual at the same time because you can actually feel the heat.

Review: Say Hello to the Lomi, the Electric Composter That Keeps Selling Out