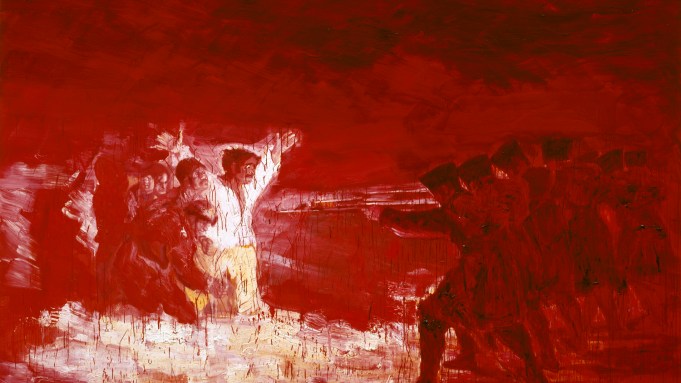 Perhaps the centerpiece of Yan Pei-Ming’s exhibition “Black Paintings” at New York’s David Zwirner Gallery is Exécution, Après Goya (2008), which was inspired by Goya’s The Third of May 1808 (1814). The latter famously depicts Spanish troops firing on civilians who took part in an uprising against the French occupation of their country. Ming’s interpretation-unique in this dark show for its bold red paint-dramatically wipes out the background. The work evokes an almost visceral response of fear from viewers, while removing some of the dead bodies from the foreground of the picture, replacing them with blotches of white paint.

Other paintings relate more generally to Goya. In All Crows Under the Sun are Black! (2012), a shadowy image of the Acropolis of Athens is shrouded in layers of black paint, an ominous flock of birds hovering above. The work alludes to Greece’s current fiscal crisis and an ancient Chinese proverb, “all crows are black under the sun,” often interpreted as suggesting people everywhere are the same. The theme of universality permeates the exhibition: Moonlight (2012) captures the frailty and anxiety of small human figures adrift in an unsteady boat on a vast expanse of dark, shadowy sea. Ming explained to A.i.A. that he wanted to represent the plight of illegal immigrants.

Ming calls his large-scale canvases “collages” of photographs and memories. Best known for emotional, monochromatic portraits and bold, expressive brushwork, he was the first Chinese artist to exhibit at the Louvre.

LISA STAHL What is the influence of your childhood in China on your work?

YAN PEI-MING A major influence on my work, which comes from my childhood, are propaganda paintings. In China, in the 1960s, every event served as an opportunity to produce new propaganda paintings. Chinese political policies were the source, subject and object of these works. Among all these events, the death of Mao Zedong, when I was 16, was the most profound moment in my young life.

STAHL How did painting after Goya help you to understand or interpret his work?

MING I’ve always been fascinated by Goya’s Third of May 1808. Working on Exécution, Après Goya allowed me to better understand the time period in which it was made. It’s a remarkable painting in that it allows the viewer to connect with both sides of the story it depicts. One understands the motivations of the executioners, who believe that they are acting on behalf of freedom. But we also connect with the victims who sacrifice themselves for their cause. My interest in the painting also allows me to reflect on our current political and historical time.

STAHL How do you balance topicality and universality in your painting?

MING For the most part, I choose my subjects according to their relationship with their historical moment. The media, both print and televised, provides me with topics and images. Using oil paint on canvas, I transform news into contemporary history paintings. I’ve always been obsessed with executions, the spectacle of the killing of a man by other men, and by the idea that history is a cycle that repeats itself forever in new ways. Goya’s paintings remain topical to this day.

Anything can be an opportunity to create a painting. From idea to image or image to idea, it may take a few weeks until the painting is complete. It’s impossible to plan. But as for this work specifically, Goya worked from imagination. There was no documentation. He had to use his imagination to provide a testimony of his time. In my case, I am working from photographs and documents that attest to what has happened.

STAHL Are there any recent personal, political, emotional events that have struck you as “after Goya?”

MING The image of Colonel Gaddafi’s corpse had a profound impact. To express and represent revenge, the law of retaliation, interests me a lot. There is no revolution without bloodshed. And so the fate of this character is also a subject for reflection, from his beginnings on the Libyan political scene to his return in recent years to the international political arena. From his terrorist actions until his end, where he was killed like a dog.

STAHL Women are largely absent in this exhibit.

MING This is not intentional. I have painted series of women before, often as victims, but they are not as prevalent as other subjects in my work.

The depiction of women in art is a subject that has always interested me, but the way in which they are treated requires a lot of reflection on my part. I should find a good way of integrating them more into my work to make it more balanced.

STAHL As your work and life has evolved, France has clearly been a big influence. At times your work has been openly critical or controversial in China.

MING I think my pictorial language is very European. My work is well received in France, as that is the country where I studied and came into my own as an artist. But this language is also understood in the USA, and I believe there is a good understanding of my work by the American public. As for China, since my work is not always officially “Made in China,” there is some misunderstanding, both in terms of the subjects and their pictorial treatment. On the other hand, I’ve always tried to speak in a universal language.