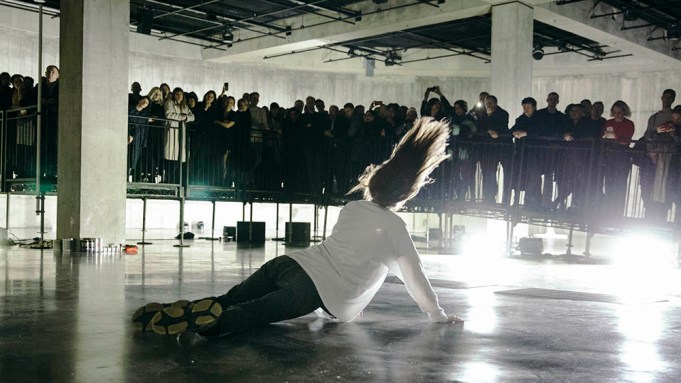 Anne Imhof presents seductive, melancholy performance populated by beautiful, androgynous, sullen youths. Over six nights in March, the German artist staged Sex, her latest epic composition, in the Tanks at Tate Modern, cylinders that stored oil when the building was a power station and that were converted into performance galleries in 2012. Sex shared some similarities with Imhof’s powerful, angst-ridden Faust, which earned her the Golden Lion for best national pavilion at the 2017 Venice Biennale. Like that work, Sex featured dancers, musicians, and models in club gear singing, headbanging, and wrestling across different spaces over four hours. But Sex, shaped by Tate Modern’s three subterranean spaces and incorporating Imhof’s paintings and sculptures, was more elaborate and ambitious in scale than Faust. The South and East tanks were each dominated by a pierlike structure, one for audience members to stand on and the other accessible only to performers. The adjacent Transformer Galleries were lined with Imhof’s large-scale yellow and black paintings (“Gradients”), graffito works (“Scratches”), and silkscreen prints portraying her partner and collaborator Eliza Douglas with her mouth open in a silent scream. In this third area, which evoked the intimacy of the bedroom, performers sprawled on high plinths or crouched on shabby mattresses surrounded by smashed iPhones, beer cans, bongs, sex toys, and S/M gear. A mesmerized audience trailed the performers as Imhof coordinated her team’s movements by text message.

Imhof, who graduated from the Städelschule in Frankfurt in 2012, enjoys the polyvalence of single-word titles. Sex can refer to gender and intercourse, and evokes a range of associated behaviors such as tenderness, aggression, and cruelty. These semantic possibilities were amplified by the variety of genres represented in the soundtrack for the performance: against a musical backdrop combining metal, industrial, and grunge with baroque and classical, recurrent waltz and tango motifs collided with slam dance and pogo. Professional dancers electrified the spaces with balletic lunging, while other performers lounged about vaping. As the performance approached its feverish finale, the mood intensified. Imhof’s expressionless cast burnt bunches of dead roses, poured beer down a glass partition and over the floor, slammed into viewers, and slapped padded columns that were part of the set. The rock-chic aesthetic of Imhof’s work has spawned accusations of cryptofascism, and her lithe, athletic performers undeniably exude a certain elitism. However, a more optimistic reading might see evidence of a tolerant nonconformism in the mix of her performers’ ethnicities and gender identities, and in their resolute lugubriousness a refusal to sugarcoat reality. The overriding gothic gloom can feel adolescent yet somehow terribly pertinent to the current divided social and political climate. At a time when the supposed grown-ups in governments worldwide are fomenting turmoil and bigotry, Imhof’s fluid and effortlessly cool world offers an alternative idyll.

Sex is on view at the Art Institute of Chicago from May 30 to July 7 and travels to the Castello di Rivoli in Turin in 2020. I met with Imhof between rehearsals for a discussion of the production and her process.

ELIZABETH FULLERTON  How did the Tanks’ industrial ambience and scale chime with your vision for Sex?

ANNE IMHOF  I was interested in having multiple layers. The Tanks allowed me to make three overlapping pieces in one. I wanted them to bleed into each other, blurring all the time, so I was thinking how the different tempos could work together.

There’s a painting of a rotated sunset on the wall of the South tank, which was one of the initial images in the show. This vertical horizon line for me stands for an ending, for annihilation or death. In that Tank you’re looking into a landscape from an overlook platform, but actually you’re indoors.

By contrast, in the Transformer Galleriesthe kind of images I wanted to create resemble portraits. There is an element of cruelty when viewers can stare at an intimate moment unfolding that close up for as long as they want to. One of the choreographic sequences in this space involves frantically putting in order things that are lying around—a beer can, patent leather shoes, my bronze head sculpture. They are placed in a row with bongs and toothpicks. It was Eliza’s choice to use the Golden Lion as a prop. The lion ended up among the rest of the objects with a Stella Artois can on top of its wings. The idea was to make all the objects seem equal, and to use them as attributes to suggest a narrative about a person. The performance shifts from individual characters to a shared persona that is distributed over multiple people.

FULLERTON  What is the relationship between your paintings and the performance in Sex?

IMHOF  I chose these black and yellow works to be the predominant paintings in the show and this line that blurs in the middle has to do with a fluidity that I wanted the production to have. There’s something very violent in these two colors coming together. The way I work with painting and performance is very much the same. In the studio I execute some things myself and then hand over control to somebody else, as I do in my performances. I determined where the line and shadow go in the paintings, but they were made by a car painter. When I draw and paint there’s a moment of accident that I almost look for as a way of discovering what might come next. But it also gives me a feeling of panic because it’s not planned.

FULLERTON  Were these paintings a response to the performance or vice versa?

IMHOF  They were made at the same time and they influence each other. From the very beginning I worked closely with some performers, most significantly Eliza Douglas. Many of the movements and images were influenced by her art, as were the costumes and large parts of the music that we wrote in collaboration with Billy Bultheel.

IMHOF  Everybody brings their own personality and expertise with them, which you see in the improvisation. There are no particular roles assigned to performers but certain character attributes and gestures that are almost shared by everybody. People take them on at various points in the performance.

For example, there’s the character of the flaneur, who repeatedly enters the space simply for the sake of entering it, without performing a grand gesture that the others seem to be waiting for. Sometimes a gesture is introduced, then copied. You see a person turning with their hands held up, making a shadow on their face. Then another person copies them, so the gesture becomes an image that has a certain symmetry. I worked a lot with the motif of the doppelgänger.

FULLERTON  You’ve said you regard your performances as sequences of images. Do these thread together a loose narrative or explore themes and moods?

IMHOF  It’s nonlinear and quite loose. There are scenes, songs, sequences, and images that are fixed as well as unchoreographed “in-betweens.” These “in-betweens” are very important for the overall mood and aesthetics of the piece on a particular day. In general everyone brings in their own images and a lot is decided in the moment. It is a shared process of decision-making. Sometimes almost nothing is happening, which is an important aspect of the work for me. Sometimes it’s the opposite, and the piece suddenly peaks. It’s not just me who’s in control.

FULLERTON  What draws you to that blankness, which also prevails in previous works such as Faust and Angst? It’s quite confrontational when the performers stare at you for minutes on end.

IMHOF  I’m interested in the moment of uncanniness that comes from being looked at, when you discover something inside you that is maybe the thing you’re most in conflict with. Holding the gaze can also feel empowering

FULLERTON  The zombielike performers enact the violence, pain, and discomfort of sex without the joy.

IMHOF  There is a bit of zombie inside there for sure, when they dance the waltz as if they are undead, but I also think there’s a lot of mindless action around us, so why not take it as an image and put it in.

For me that moment may seem painful, but there is a joyful aspect in falling on the floor with somebody and then holding them, even if the embrace is almost violent. There’s something in it that’s very tender and real.

FULLERTON  When you discuss the visual aesthetic with the team, do you instruct them not to smile?

IMHOF  Yeah, we might jokingly say “don’t smile” if somebody new comes! This affect is also part of the exaggerated quality of the performance. In Sex I use lighting to create shadows behind people that are like a weird exaggeration of their own size. And then there is a moment where someone whips that massive shadow or where Eliza walks slowly toward the audience but the bouncing light makes it look like her shadow is going away. A huge shadow can look like an uncanny blackness from the neighboring tank.

FULLERTON  How do you see the work evolving as it moves to Chicago and Turin?

IMHOF  One of the piers is going to Chicago, where it will become something else—the only large-scale sculpture alongside paintings and drawings. I liked thinking of the objects and works having many lives, from hanging on the Tanks’ rough walls to being in a white cube space in Chicago. I’m interested in what art is and if it still has any vitality. With Sex I wanted to celebrate art as something undead.