Among the many works of Polish feminist art on view at Brooklyn’s A.I.R. Gallery right now are two by artist and trained pianist Monika Weiss: the graphite drawing Nirbhaya II, from 2020, and the sound installation METAMORPHOSIS/DAFNE (NIRBHAYA), created last year. For the latter, you sit on a piano bench facing a blank wall as a sound composition in five movements emanates through noise-canceling headphones.

It’s a disquieting experience. The composition is dedicated to victims of gendered violence and inspired by the Greek myth of Daphne, a nymph who escaped Apollo’s advances by transforming into a laurel tree. For one movement, eight vocalists were recorded individually. Their audio was then layered to evoke a chorus of ghosts whose voices rise and fall in lamentation.

A Poland Museum Ousted Its Director for One Who Promises to Move Away From 'Pro-Environmental, Gender, or Queer Art'

METAMORPHOSIS/DAFNE (NIRBHAYA) is Weiss’s ode to Daphne, whose tragedy was twisted somewhere into a love story, and Nirbhaya, the name was given to the 23-year-old woman who was raped and killed in New Delhi, India, in 2012. In Hindi, Nirbhaya means “fearless.” It would be nice if our world were like Daphne’s, where the soul isn’t a hostage to the body.

“The transformation is horrific, but also liberating,” Weiss said in an interview. “The moment is full of wrath: Try and catch me? I’ll become a tree, fuck you.”

Weiss’s piece is one among many in “Sleepless in Warsaw,” a survey of fifty years of feminist art in Poland. The mood across the works on view swings from defiant to sorrowful. There’s also room for joy and mischief.

Curated by Agnieszka Rayzacher, the show is the product of a several-year collaboration with the Warsaw-based gallery lokal_30, which currently has on view an exhibition of A.I.R. artists. “Sleepless in Warsaw” assembles paintings, videos, sound installations, photography, and wall-mounted sculptures by nearly two dozen Polish artists, almost all of whom are women. There is also one Ukrainian female artist, Oksana Briukhovetska, whose tapestry is displayed in the gallery’s window in a signal of solidarity. Pioneers of Polish feminist art are represented, including Jolanta Marcolla and Natalia LL, who died shortly after the exhibition opened, and Zbigniew Libera, a video and installation artist, and one of the few men included.

The show is divided into three sections: first, works created in the last dozen years; then, ones from Poland’s democracy and capitalist transition between 1981–91; and lastly, the lodestone works from the 1970s and early 1980s. The reverse chronological approach helps show how the movement has expanded.

According to Rayzacher’s statement, “sleeplessness can also be seen as a state of hypersensitivity, an inability to come to terms with the existing order, or rather disorder, of the world.”

The sensibility is apparent in a large oil painting made by Anna Orbaczewska this year, Pietà, which dominates one wall. Orbaczewska often paints ambiguous interpersonal dramas on canvas, paper, and ceramic, where narrative cedes to vibe, but this one is decisively about escaping a toxic relationship. A blue woman struggles against, or collapses into, the embrace of another against a blood-red bleeding background.

“Anna defends herself as much as she can: she refuses to bury her feelings,” Rayzacher wrote in the catalogue from Orbaczewska’s 2020 show “I do not know how I should tell that” at Galeria BWA in Zielona Góra. “When this tranquil person touches a paper with a paintbrush, she begins to yell, scream and howl. She is no longer a woman, but a witch.” There’s an occult edge to Pietà—the hood, the ritual underway on the blue woman—but Rayzacher’s commentary touches on a theme running throughout the show: the aesthetic and practical value of the female body.

Orbaczewska’s painting shares a wall with a banner-like photograph by Iwona Demko from 2017. It’s titled Skirt Lifting or My Dream about the Black Protest, and it depicts the artist raising her skirt to expose her genitals, a gesture of protest known as anasyrma. “In many cultures, it served to humiliate those who committed violence or disgraceful and offensive acts,” the wall text explains. The photograph is meant to include 408,223 images of Demko, one for each woman living in Krakow in 2016, and aims her ire at Poland’s abortion restrictions. 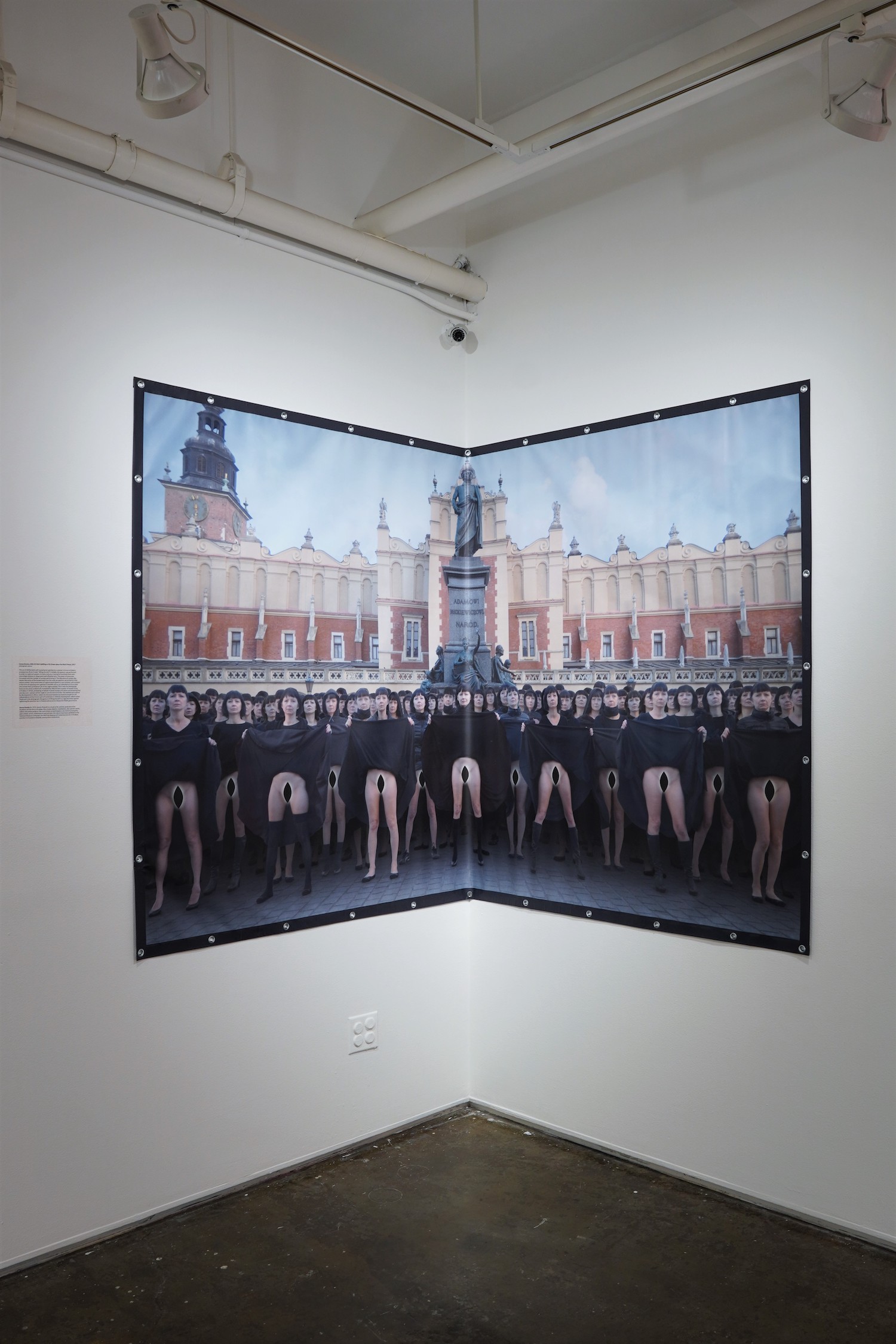 Another witchy woman comes courtesy of Natalia LL, whose iconic series Consumer Art (1972–75) features a 16-minute video and close-up photographs depicting young women suggestively consuming bananas, among other foods. Natalia LL’s brash critiques of conservatism and consumerism in Communist Poland profoundly changed the perception of women artists, even though the artist herself later made attempts to distance her work from the feminist movement. Ewa Partum, a contemporary of Natalia LL, once said she would perform naked out in public until women in the art world obtained equity. In Self-identification (1980), the nude Partum meets a bride in front of the Warsaw Civil Registry Office. The latter’s marriage suit seems stifling in comparison.

Natalia LL’s work, meanwhile, is still causing a stir: in 2019, the director of the National Museum in Warsaw, Jerzy Miziołek, pulled Consumer Art, along with works by Katarzyna Kozyra and the artist duo Karolina Wiktor and Aleksandra Kubiak, from view, claiming that they “have a distracting influence on young people.” It was treated as an act of censorship stemming from the Polish government’s slide into right-wing extremism.

The political shift has resulted in an ideological takeover of state-run museums and a threat to any groups who don’t conform to strict Catholic values. Last year, Human Rights Watch warned of an “increasingly hostile and even violent environment for women’s rights and their defenders in Poland.” On March 8, International Women’s Day, at least six human rights organizations in Warsaw—including the Women’s Rights Center, which hosts a domestic violence survivors group founded by one of the exhibition’s artists, Zuzanna Janin—received bomb and death threats.

Janin’s floor-to-ceiling series of drawings and collages TAKOTSUBO (Recovering from the Broken Heart Disease), from 2020, is installed at the gallery’s entrance, so it’s the first and last artwork seen. Takotsubo is commonly known as broken heart syndrome, in which distress weakens the heart’s main pumping chamber. The stress here is the bitter dissolution of Janin’s marriage.

“The point of the artist is to show what’s inside us,” Janin said. “But in art, the woman is almost always drawn from the outside by others. That’s not what’s happening here.”

Most pieces in the series were drawn on envelopes and letters addressed to her and her ex-husband during lockdown. They feature beating hearts and anguished faces. A neon sign spelling out “Nobody is Going to Believe You” runs across the collage.

A survey like this inevitably illustrates the cyclical nature of social progress. But it doesn’t settle in cynicism: a banner by Paweł Żukowski unfurls across the gallery ceiling. It reads, “I believe you, Zuzanna.”