Alvin Lucier is a composer and sound-theorist who has worked with experimental music since the early 1960s. His many works include the electronic sonification of brainwaves and I Am Sitting in a Room, an epochal piece from 1969 for which Lucier recorded himself reciting a brief text that—by way of re-recordings of the playback of his speech over and over again in a reverberant environment—turned into an unrecognizable din.

John Olson is a member of Wolf Eyes, a noise band with roots in Ann Arbor, Michigan, in the late 1990s, and the creator of American Tapes, a boutique label specializing in limited-edition objects that often blur the line between fine art and music.

For ARTnews, the two artists spoke together—around the time of a public talk event featuring the now 86-year-old Lucier at the Red Bull Music Academy in New York—about disco, poetry, and working in and around sound for many decades between them. — The Editors of ARTnews

Would Donna Summer still be a “Bad Girl” if she had done electronic brainwave solo performances before the world turned into a blazing disco inferno? Is I Am Sitting in a Room going to be the top iTunes track for Mars in the year 3030? Are the Boston Celtics any good this year? Do you play tennis without a net? Lots of questions are bubbling around, but thankfully they are all answered here by the humble yet heavyweight abstract monster of daring sonic radicalism, the almighty Alvin Lucier. On a dreary, rainy Sunday morning, I got to confirm my hunches that Alvin was the hardest of the hardcore and a truly American experimental challenging icon of granite status. Free your mind and your oscillators will follow! — John Olson

John Olson: I want to start with modern times and then go back, because I read interviews with my heroes and find myself wanting to see what they’re doing nowadays. So: what’s your normal Sunday morning ritual like?

Alvin Lucier: I get up, read some of the New York Times, then breakfast. I’m working on a new piece for Athens in June, for Documenta, a big hour-long piece with voice, cello, clarinet, and nine wine jars. They’ll be scattered around the space. There’ll be several sine-wave sweeps that go from high C on the cello harmonic to the low open C string and back up again.

Lucier: One of the waves will go 30 seconds a semitone. Then it will go 29, then it will go to 31. They start together, splay out, and come back up again so that the waves, when down below C, would be a minute apart and then they get back together.

Lucier: Yeah, and as the waves hit resonant frequencies of the wine jars, amplitude changes will happen against these waves. I’m using part of a text by Hilda Doolittle. Do you know that poet? H.D. she was called. She was an American poet at the beginning of the 20th century—an Imagist and a friend of Ezra Pound.

Olson: Do you find Sunday morning the best time to work?

Lucier: No, I work whenever. Today I’m going to watch a basketball game. I’m a Boston Celtics fan. I’ll watch the game and then continue working.

Olson: What have you been listening to lately for enjoyment?

Olson: The first bassline I ever learned was “Disco Inferno” and, whenever I grab a bass, it’s my go-to lick.

Lucier: I love that. My grandfather, who I never knew, was a lawyer and an organist too. He used to tell my father to pay attention to the bassline and my father used to tell me, I don’t know why. I think about that a lot.

Olson: Back to more recent times, do you think there is a kid somewhere with his computer making a new version of I Am Sitting in a Room?

Lucier: You know, I went to MIT two years ago and did that piece, and a little kid—must have been 11 or 12 years old, the son of a professor there—when I came off the stage said to me, “That was cool.” Two weeks later, he sent me a version of I Am Sitting in a Room that he had done at home on the computer. It was perfect. I thought to myself, “I’m 85 years old and this kid at 12 years old likes my music, something must be good, you know?” 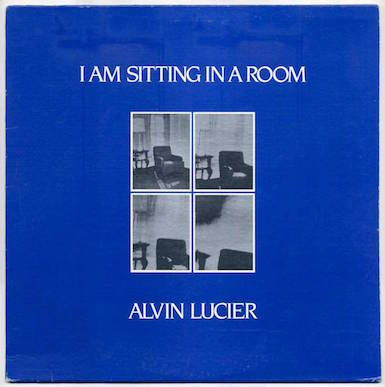 Olson: Do you think, in the year 2017, that owning an instrument is already an arcane idea?

Lucier: No. I make pieces with instruments all the time. I usually use classical, orchestral instruments. In my work, with just acoustical waves moving in space, they can’t be complicated. They have to be simple, so I like long extended pitches.

Olson: You’re also interested in natural phenomena, which is interesting when you juxtapose that against oscillators and other stuff you use.

Lucier: Do you know the guitarists Stephen O’Malley and Oren Ambarchi? They asked permission to do my pieces with sine-wave sweeps using electric guitars. It’s going to be good, I think. I like live performance. I love to hear people play with imperfections—there will be some imperfections when they have to bow or something—but I prefer that over just the purity of oscillators all the time.

Olson: Is I Am Sitting in a Room kind of dealing with imperfections?

Lucier: Well, I just wrote that text in real time the night I did the recording. I was thinking of Robert Ashley. The idea that everyone’s speech has irregularities. We’re all imperfect, aren’t we?

Olson: Would you tell students nowadays to still have a base learning of reading notated music and writing for notation, or would you concentrate more on virtual instruments and composing digitally?

Lucier: I don’t think they have to have knowledge of notation, though for me it’s been very good. They don’t have to know conventional Western notation, but I think that seriousness about making a piece is very important.

Olson: I read a quote from John Cage back in the ’50s that said a lot of avant-garde music is “tennis without a net,” and there needs to be discipline and a foundation to go against rather than just being against everything. If I read the history correctly, your first instrument was percussion?

Lucier: My only instrument, really. I played a little piano, but I don’t really know how to play, never have. I don’t get up and play an instrument—I get up and think about a piece. I think that’s been good for me because I haven’t fallen into any of the clichés of instrumentation.

Olson: I read a quote from Max Roach that said, “All the radical changes in music begin with the drums and the rhythm first.” What do you think about that?

Lucier: I don’t know, but he was a pretty good drummer, wasn’t he?

Lucier: It’s amazing how he tuned his drums. About my piece Music for Alpha Waves, Assorted Percussion, and Automatic Coded Relays (1980), I remember some of my colleagues used to say, “Why don’t you just use an oscillator?” People were always telling me to do these stupid things. I said, “Well, oscillators are periodic, you know?” I had a West African drummer named Abraham. I asked him to just eighth notes—“just play steady notes”—and when he played them they weren’t steady at all. I thought, well, if anyone can play steady, it’s Abraham. But of course he can’t, because of his inflections. If he plays a steady group of notes, it won’t be steady—there will be little spaces. It’s his personality.

Olson: I wanted to ask about the Sonic Arts Union. You guys did a lot of touring from in the late ’60s and early ’70s. How was touring with that collective (including Robert Ashley, David Behrman, and Gordon Mumma)?

Lucier: It was wonderful. We didn’t know what we were doing half the time. They were exciting tours, kind of messy. We did it all ourselves. We had a good time.

Olson: How was the reception?

Lucier: In Europe, people didn’t know what the hell we were doing. I mean, imagine somebody walking on stage and making electronic music out of a French horn. Or imagine me on stage playing electrodes on my hands. We were all doing such different kinds of stuff. When I look back on it, I wonder, “What did people think?”

Olson: Is there one performance that sticks out in your mind as particularly intense?

Olson: That’s a great environment to be doing radical art in.

Olson: In the year 3030, when people are listening to their first records on Mars, what would you want to be the ultimate Alvin Lucier recording? Which one are you the most proud of?

Lucier: I Am Sitting in a Room would be good to tell them what it is like to be in an enclosed space with air in it. You’d want them to know what reverberation was, how fast sound goes through the ear.

Olson: Do you view yourself as a primarily American composer, or are you more global? How important is American-ism to your compositions?

Lucier: Well, I want to make music that doesn’t have any cultural boundaries. Echoes are everywhere, but I try for that. Of course I can’t succeed: I am an American guy, so I have to be American, but I don’t think of myself basically as an American.

Olson: Brainwaves can be considered not-American.

Lucier: Do you know Yuji Takahashi? He said, that piece was very American: electrocution.

Olson: That’s a good one. So what advice would you give to young composers these days? What would you tell them to listen to, where to put their discipline?

Lucier: I’d tell them just to keep working. Don’t be discouraged. I remember at one point, after Cage and John Adams and Philip Glass and those guys who were so important, I thought, gee, we missed the boat. But now, the older I get, my work is being played all over the place. Stick to your own idea. I didn’t change to appeal to a wider audience. Just keep working: at least when you get to be old as I am, you’ll have a body of work that you can be proud of.

Giannis Defends His Brand as Fervently as He Protects the Rim