Alicia Gibson is a Brooklyn-based artist who recently staged a solo show, “Purgatory Emporium,” at Canada on the Lower East Side in New York. Previously, she was included in the group show “Hill of Munch” at Rachel Uffner in New York and a staged a solo exhibition at Julius Caesar in Chicago. She has work in upcoming group shows at Lyles and King in the New York this summer and at Venus Over Los Angeles this coming fall.

Stone Temple Pilots get multiple shout outs in Gibson’s lively Consumer Report, which also includes quality studio time (where seashells are broken down with spray-paint cans) as well as a trip to the dentist for a root canal. The New York Daily News is read at the pizza spot; the New York Post is consumed at the bagel spot. Plus ruminations on the relaxing properties of true crime television shows, and a lot more, below. —John Chiaverina

Always wake up right before the alarm, it kinda sucks. I normally don’t get up this early but I have a dental apt. I check my secret Instagram account as my first solo show in NY is up… Gotta see some more of the work that I made but on a very small scale… It’s secret because I find being on Instagram makes me feel like my thoughts are being broadcast—they are. After my third attempt, I went underground.

Below is my favorite band from high school, STP, and I still listen to them? RIP Weiland. Things are already getting dorky in here.

Alarm finally rings. I’m cold and have to shower today, yuck. But I like my apricot face scrub. And, I get to listen to Fetty Wap, again, on my iPhone, on the closed lid of the toilet. Out the door, grab Cliff Bar, Macadamia. Nothing that will crack my teeth, please.

This report is probably gonna be more about my life as I’m not very tech savvy. 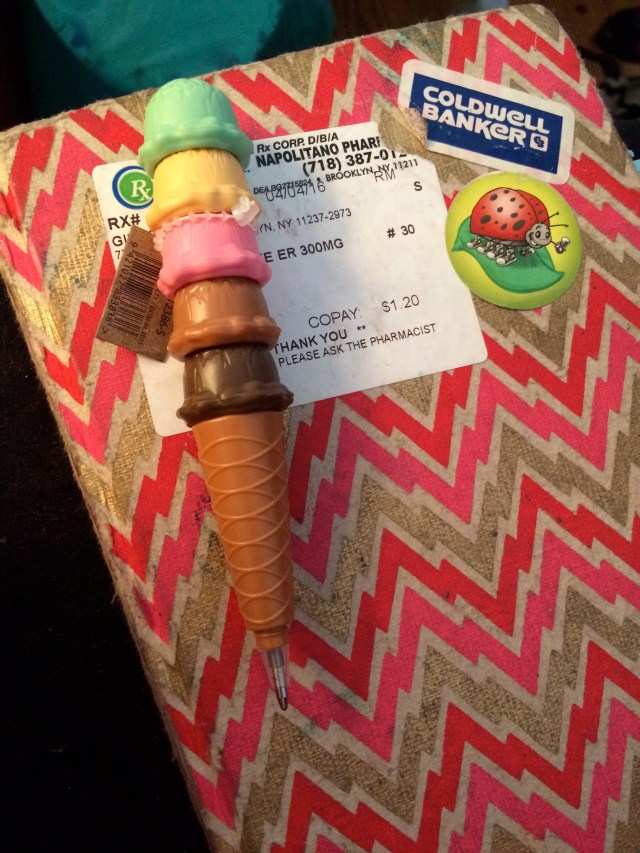 Arrive at NYU for dental appt. My dentist Margaret (she’s the best) calls me to the chair. They’re playing the pop music on the satellite station or whatever it is and it’s already a good day, I mean it beats the normal elevator music. She proceeds with a root canal. I have a lot of work to get done.

Head to Artist and Craftsman for art supplies. I forgot what I bought because I go there almost everyday, they’re nice people. Dangerous that it’s on the way to the studio.

I have pizza at Vinnie’s, cheese please, vegetarian since I can’t remember, actually I do. It was about kindergarden-ish and the teacher was showing us a book about a cute cow with pics and the kid next to me was like that’s where hamburgers come from………….Vinnie’s is always playing a good array of music, Dylan as of late, but any classic rock they play is good. I felt weird today when I was paying the cute (they all are) guy at the register and ASAP Rocky’s “Fuckin’ Problems” comes on… I mean I like the song, it’s just, you know… I’m shy!

Read the Daily News, hey it’s cheap and easy to read. A notch up from US Weekly. Oh, and when I put the parmesan cheese on my cheese pizza I can use the paper as a cover-up for when I unscrew the cap and put approximately two tablespoons of parmesan next to my pizza, so that when I get to the crust, I can dip the crust into the cheese. Genius.

I get to the studio finally, been in the same space for 8 yrs. as it’s rent controlled. It’s only 200 sq ft, which is great as I’m a self-diagnosed agoraphobe…Then I work on some things. Oh, and I have a visit about Frieze, pieces are selected.

I leave the studio and walk back to Bushwick to meet my friend Mark. It’s two miles in any given way but I like walking and not being confined. We meet at the Cobra Club, probably some black metal was playing. I drowned it out as I grew up around that music.

We head to Mark’s studio in the Troutman Building, he had a ton of new drawings for paintings which he scrimshaws on panels. 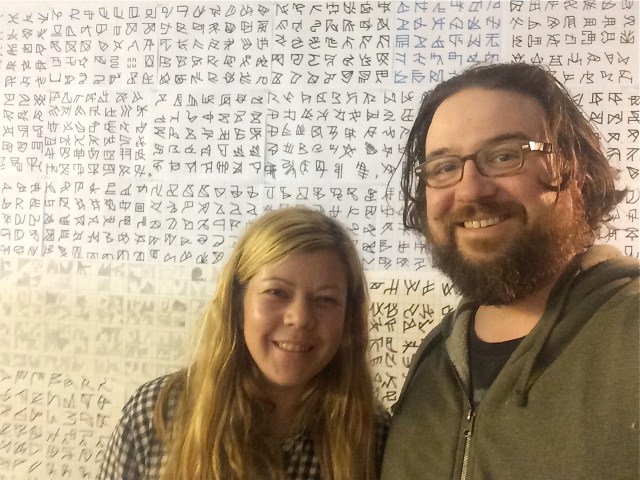 We’ve been friends for a while and he’s great. We head a flight down to visit our friend Alex, who is prepping a large canvas.

I txt my mom a photo that might be included here and she was happy bc I was smiling. I forget to call her and I take Nyquil to cope with insomnia (they were out of my usual Advil PM that doesn’t make me feel like I’m slowly dying), watch FBI Files on my mini iPad, and fall asleep. Yup, I’ve talked to others, and while I really enjoy watching the macabre, I find Forensic Files and the newer-to-me FBI Files to have a calming effect. Sometimes I like comedies, Trailer Park Boys, Better Call Saul, Anthony Jeselnik is tops, oh, and anything with Danny McBride in it, crush crush. In addition, Switchblade Sisters is one of my favorite movies, if anyone cares. 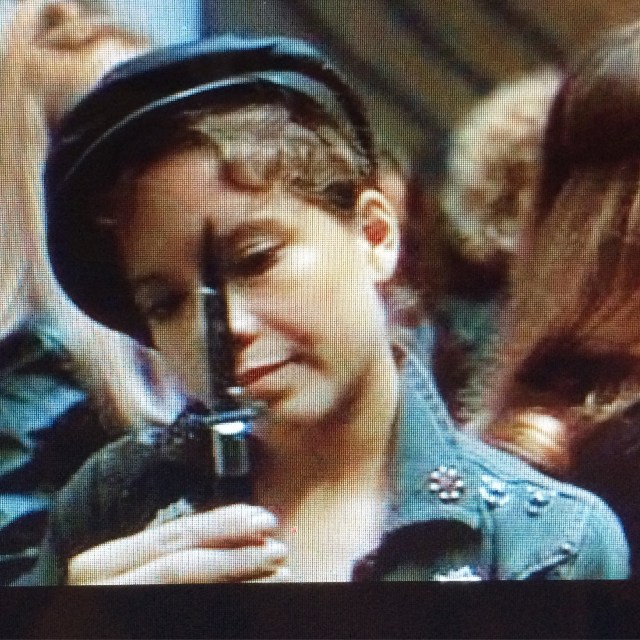 Keep resetting the alarm (never a morning person), got up, hungover, didn’t shower, headed uptown to my weekly psychiatrist. Flip through whatever magazines they had around, believe it was Home and Garden from prob 2007. Got blood drawn, which I’ve never minded. We decide on no more cognitive crap and to only meet once a month. Did I mention he’s been video recording my sessions?

Great lunch at my favorite buffet deli. Hop on the train and head back to Brooklyn. Go to my friend Shara’s studio for some worldly advice and check out her new paintings. Walk the 15 minutes to my studio. I love the hands-free talking through my headphones thing. Get to studio. I’ve decided not to go to openings for a couple months, except perhaps a few.

Get upset and have to talk to my mom on the walk home. I sing “Rockin’ Robin” and tell her not to chime in as she has a terrible voice and that wouldn’t help. Love her.

Writing this now but am sure more will happen.

Slept in, shower, love that apricot face scrub, gets me through, walk down Knickerbocker Ave. to look for seashells for a ptg. An image from my book on kitsch. The weather is finally nice, but wearing my mid to mid-heavy coat. You know, I use up data and listen to music on YouTube. Let’s look now and see search history… STP; Fetty Wap; the female remix of “Loyal” featuring Keyshia Cole; Tupac; Eve… College stuff that could be included under the previous list as well–groups like Magnetic Fields, Bonnie Prince Billy, Modest Mouse, even… Okay, I have a very limited selection on my phone too: Hank Williams; Doc Watson; The Clash; Nirvana, NIN; Ludacris, Lil’ Kim; Cash; Geto Boys; Eminem; ASAP Rocky; The Crystals; Flatlanders; and Townes van Zandt! xo. The good, the bad, and the ugly. Oh, this whole paragraph is embarrassing and I even left out Shaggy, JaRule, and Nelly?

As you get older you just like stuff whether it be cheesy or not because you do. So, to summarize, we are varying between ’90s grunge and contemporary cheesy hip-hop with a few other things thrown in. But the song below has stuck with me through the years, probably for its autobiographical nature that I can relate to in my work, plus other life things, plus it’s a great fucked-up true song… He’s now a preacher in Texas.

You know, I listen to the same song on repeat often for the entire day. Weird like that. So, these songs can last months.

Got two bags of shells at the party store for a new ptg. As I was heading back to my apt. I ran into my landlord’s girlfriend who is a med student, ramble to her about my vertigo and recent loss of vision. I’ve recently been to an ophthalmologist, a neuro-ophthalmologist, and gotten an MRI in vain. Things are gonna be bad today until at least 2 p.m., the time my sight usually comes back.

Train to Lorimer to get a couple cans of spray paint. Then Bagelsmith, the best, poppy not toasted with a bit of scallion cc and a DC DC DC, find a left-behind copy of the NY Post (I know), then Artist and Craftsman–nothing out of the usual, walk to the studio, eyesight still not fully back. Psychiatrist calls to say he called in a refill and that my labs were way off since Sept… About when my eyesight got bad, things are looking up, changing dose and hope it gets better. It really only happens twice-ish a week but is scary as I don’t know when the onset will be, if at all.

In the studio, breaking shells and attaching them (gloves duh). Okay, had been breaking the larger ones with one of my new spray paint cans, the Krylon one, as it’s cheaper. I busted the can after turning over a shell…Sharp…And the entire can was emptied and my studio was like some sci-fi shit, not really sure, but was toxic. Keep working. 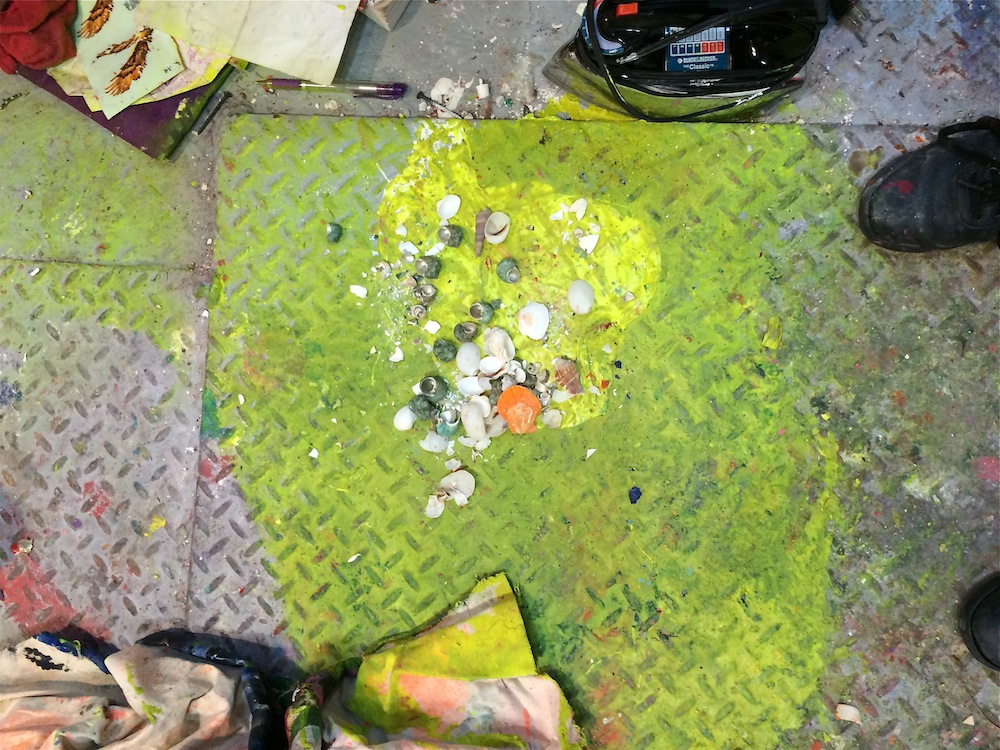 Gonna see what’s on TV now, will keep u posted. The Following on Netflix… Just reached the bloodbath finale, missed live viewing of the frontrunner Blacklist for something on Netflix… Blah.

A quick Facebook check-in, actually I can’t figure out this app thing/passwords in general and have to type my username and ID into Safari..Every..Time. I feel safer on FB as it doesn’t move as fast and doesn’t seem to be so much about likes as Instagram. I feel obligated to post on the latter. Then I write this on my desktop. I’ve ruined a couple laptops in my day by spilling drinks on them… Ship my work out to gallery in Minneapolis.

Visit one of my closest and talented friends, Amy, who is getting ready for a show in Berlin. 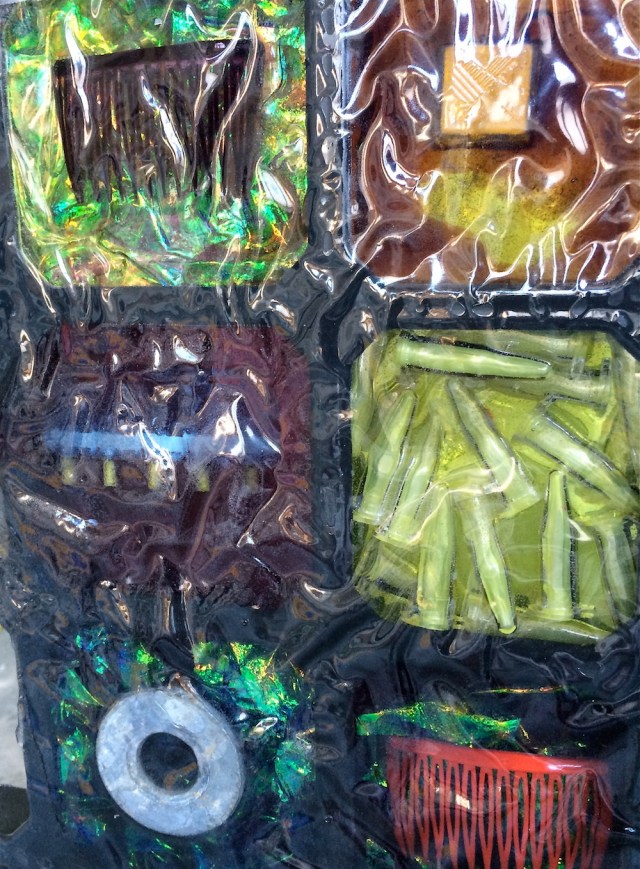 Tired, use my keys to open a package, left for studio. Once I got to the studio, I realized I had no keys, txted friend, not there. I knocked on the door and, to my surprise, some nice dude let me in. Still didn’t have keys to my studio door and has to get a tall ladder and fit between the beam and slide down the wall—this is about the fifth time this has happened. I saw a screw in the wall, tried to put my foot on it, but it got my hand, no stitches, minor cut. But I’m good I had a tetanus shot in grad school, with a nail in my palm. Stare at my art books, hand bleeding, no need to open as I’ve only a few there and I know for the most part what’s in them. Oyvind Fahlstrom was the first that I bought when I was 21. Still the one! 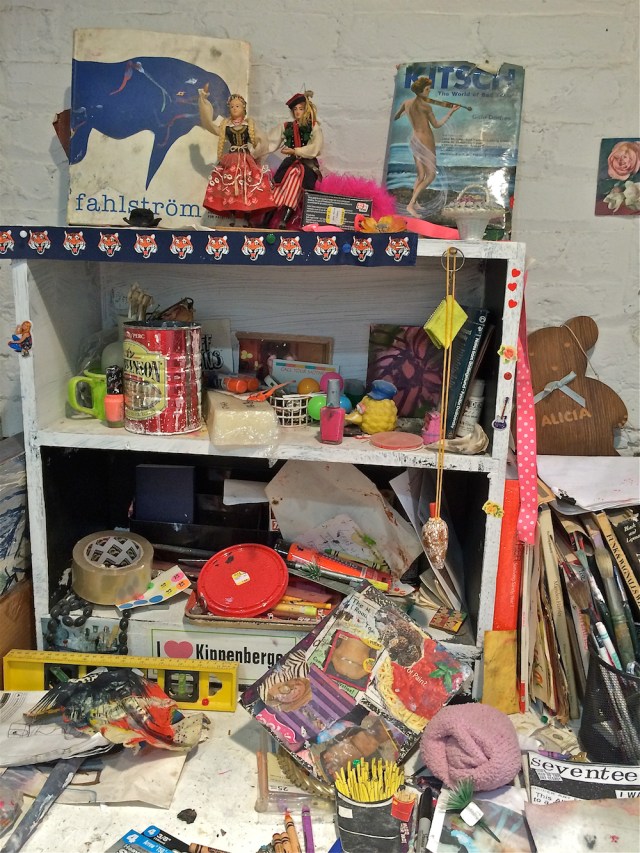 I checked FB, safety in FB.

5 hrs later, got home and had to wait outside till someone let me in. Some emails, drink more beer, look over at all my Bukowski, Mailer, and Vonnegut books.

There is going to be a fun opening two doors down at Zuriel and Jen’s Sister Space with best people/artists!

Get home safe, call mom, she answers, mumbles something and fades off. Chopin, my cat, is a weird one but keeps me company…OMG, I’m a cat lady way too young.

See you all on the flipside, 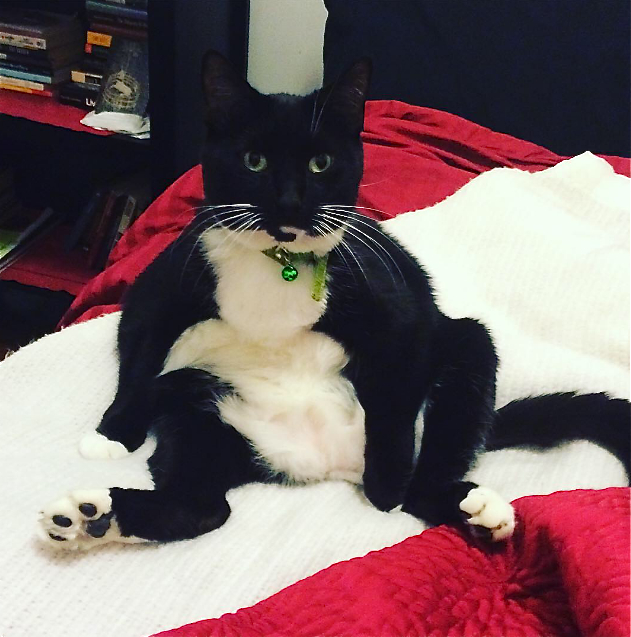