Erin Jane Nelson is an artist living and working in Atlanta. She directs the space Species with Jason Benson and their dog Lilo Caraway. In the last year, Nelson has mounted solo exhibitions at Hester in New York and Document in Chicago. Recently, she has participated in group exhibitions at Galerie Division, Montreal; Centre for Style, Melbourne; Favorite Goods, Los Angeles; and Kimberly Klark, Queens.

For Nelson, one late February week is spent attending to openings at her ATL space and speaking at Reed College in Portland, Oregon, for Reed Arts Week. While in the Northwest, Nelson takes the time to check out the Portland Art Museum and write thoughtfully about some standout work on display. All that and more—including check-ins with her dog’s Instagram account and a guest appearance from Baby Ikki himself, Michael Smith—is below. —John Chiaverina

Lilo steps on my face and starts whining to wake me up. We are out of the house by 7:05 for his walk: 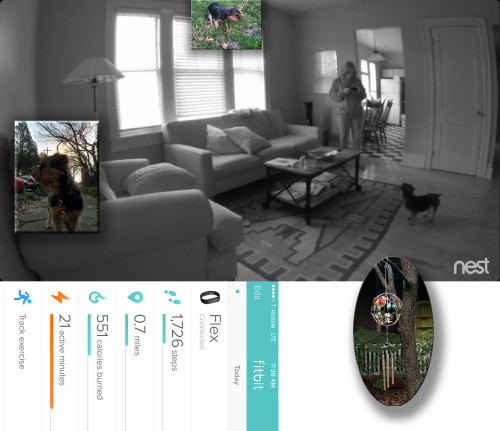 I log into my dog’s instagram account (@hobo.prince.atl) and look through his feed—all animals. Find this image of Sadie wearing a custom Walking Dead print dress—I too just purchased a different Walking Dead print fabric for future dog clothes. 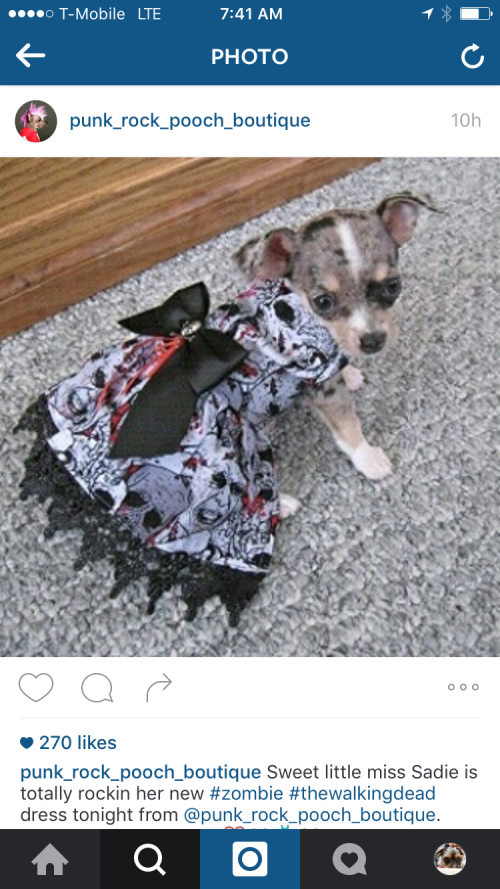 At 11 a.m., I stumble across a spread of James “Son” Thomas works in an exhibition catalog from the 1990s. The resemblance of the bust on the far left is alarming! Who couldn’t see this grubby little ladyman liberty as Führer Trump? Thomas was a gravedigger and a blues musician working out of Mississippi—most of his works are these unfired foraged clay busts with real human teeth. I’ve been thinking about them nonstop since my friend Daniel showed me one he recently acquired. 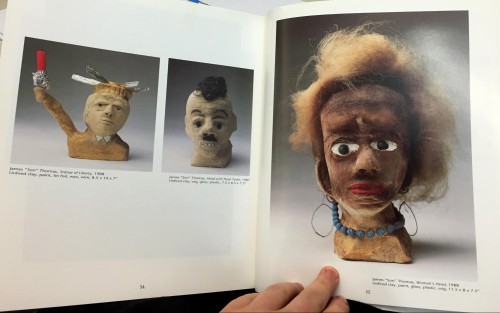 At around 3:30 p.m. I check out the Met’s new website which was released earlier today and end up browsing their “Digital Underground” blog. How have I not heard about this Meow Met browser extension? By 3:45 I am making new tab after new tab to see all these rando-generated pussies.

I head across town to Species (the space Jason and I just opened in Atlanta) for our first opening. Brook and Jason are already here finishing up the final details.

At 5:09 p.m. my mom texts me and asks if I’d like her to pick up a platter of nuggets from Chik-fil-A for the opening—I regrettably have to decline…

During the opening, my friend Alex Robbins asks if I’ve read Interspecies Ethics by Cynthia Willett, which I haven’t. He tells me the writer is a colleague at Emory—I download the ebook.

Dog Jog in Piedmont Park. We stop by the Noguchi Playscape, which is the only Noguchi-designed playground completed during his lifetime. It was the High Museum’s gift to Atlanta (via NEA money) in 1976 and has been incredibly well preserved for a 40-year-old functional playground. Dawn is somehow the only appropriate time for a childless adult to spend as much time in a playground as I do here. I check my Free Will Astrology newsletter and head home. 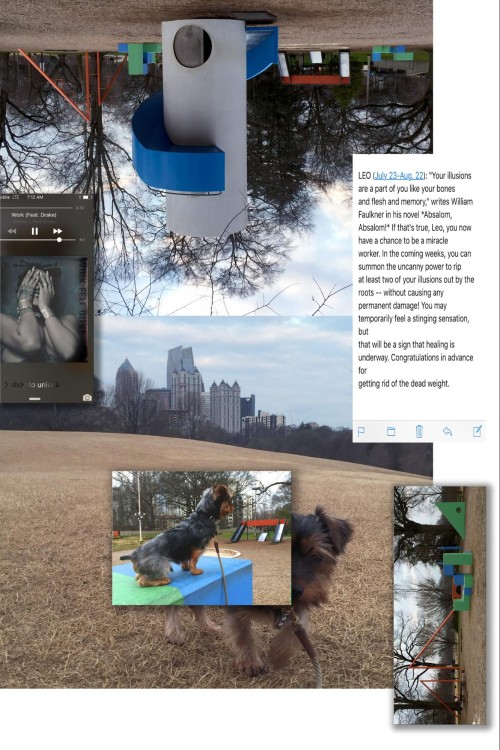 Jason and I vote for the primaries in the gym of Grady High School. (Fun fact: this is where the Joel Dean went to high school!!!)

Aria Dean’s incredible new piece “Closing the Loop” in the New Inquiry lights my social feeds on fire—as it should. It’s the best piece of art criticism I’ve read this year and I’m craving a whole book of her thoughts now. If you have not read this corrective for the endemic selfie feminism (a phenomenon I’ve utterly despised) you’re missing out.

I stop into Atlanta Contemporary to take another look at the shows that have recently opened and to drop off the rent check. My studio and Species are both out of their Artist Studio Program, located behind the institution.

Took install views of Brook’s show. My favorite work is this carved alabaster piece titled Feelie. Here’s to hoping she carves more in 2016. 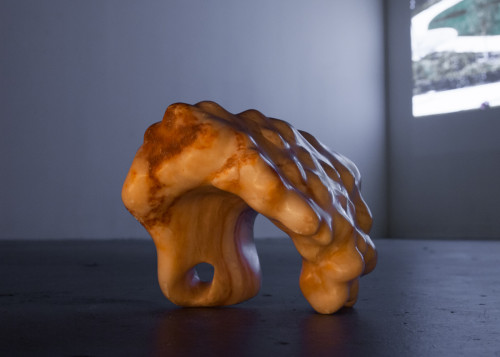 Was underwhelmed by all my all my consumptions today and was too distracted with travel prep to log—I did watch a lot of Flipping Out season 7 after work, in case you were curious. However, I did have my favorite Meow Met tab yet: 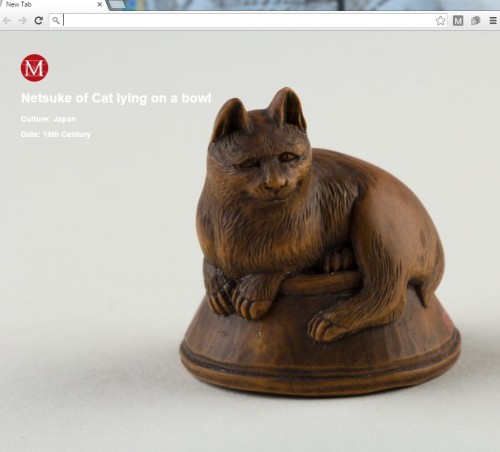 On my flight to Portland (I’m speaking at Reed College tomorrow) reading Cesar’s Way by Cesar Millan (a.k.a. the Dog Whisperer). This book is incredible so far! For example, in his recollections immediately following a tumultuous illegal border crossing from Mexico into the United States, he points out “leashes” as the first visual difference he noticed between the countries. And spends an entire chapter describing how to effectively communicate in nonverbal languages with any pet. As an anxious flyer, I am hardly even noticing the constant turbulence as I’m hanging off Cesar’s every word. 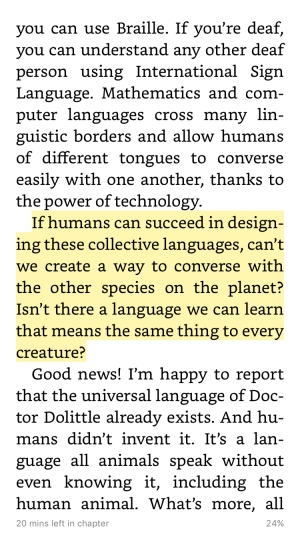 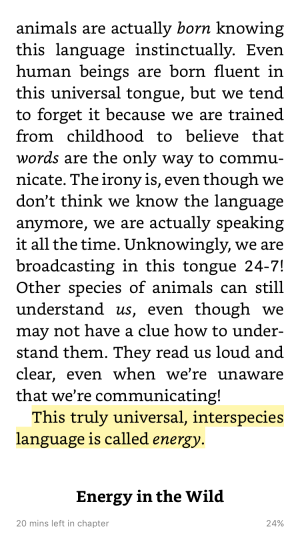 I arrive at Reed College and my host takes me to the cafeteria for lunch. Amused, horrified, and inspired to discover “The Scrounge” where tens of unfinished plates and bowls are left for the needy and the freegan students alike to eat the scraps of their peers. I can’t think of anything more liberal arts than this.

After sitting with coffee and Cesar for a bit, I meet up with Nick Irvin, who is also in town to speak at Reed (as part of a student–organized conference of sorts called RAW or Reed Arts Week). I help Nick prep for his performative lecture scheduled for later that evening. While touring around the buildings, we see this fantastic but uncredited piece of student art: 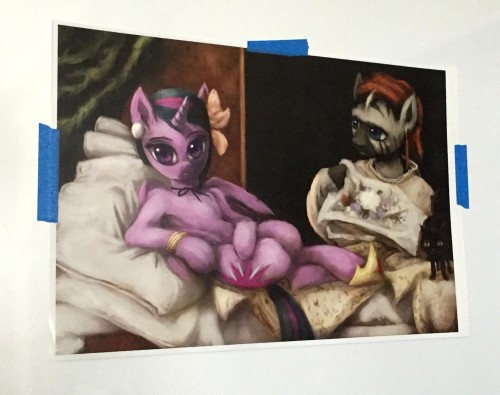 At 6 p.m., I attend Martine Sym’s talk hosted by Reed’s poetry department. I had no idea she was also going to be around this week, and I’m thrilled to see her speak. She reads from several of her published projects and I’m struck by how she’s able to make the diaristic sound so well cadenced, emotive, and urgent. I would die to have this skill.

Nick’s performance, The Angriest Dog in The World, starts at 8 p.m. and it goes swimmingly. There is incidentally a dog walking around the darkened lecture room. Having only ever read Nick’s reviews and commissioned show texts, I’m both pleasantly surprised and unsurprised that his personal writing is so intense. More, please. 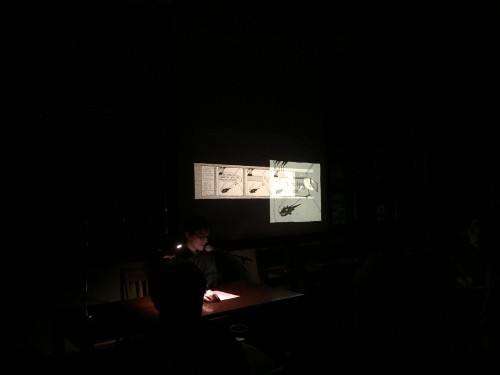 Leave Tony and Flynn’s house by 7:30, grab coffee, and get on the bus toward downtown Portland. Arrive at the Japanese Gardens by 9:20—they don’t open to the public until 10 a.m., so I spend some time walking around the Rose Test Garden, which, at this time of year, is a well-manicured garden of vines and thorns. The roses are months away from being in full bloom.

They let me into the Japanese Gardens. Everyone told me these gardens were “good,” but this sloping, mossy, overgrown but also incredibly manicured space is one of the best places I’ve been all year. I spend about 30 minutes texting in the rock garden. It’s a great place to sit and text. 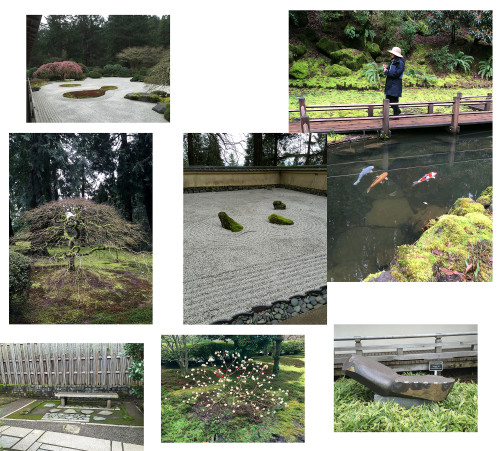 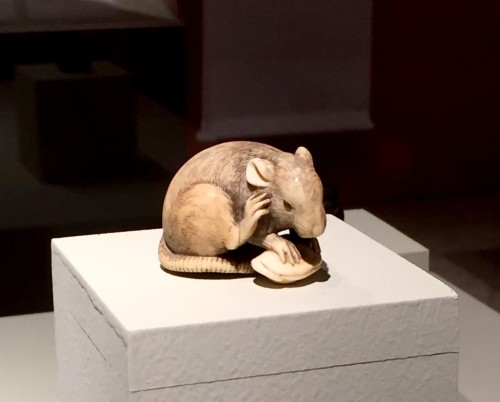 The first thing I see upon entering the museum is a special Netsuke carving exhibition. Nothing dreamier to me than a room full of tiny talismanic guys and I’m reminded of the animistic glass miniatures I’ve been making for the last year. This particular one was called Rat with a Peapod and was carved by Yamaguchi Okatomo in the 1700s. 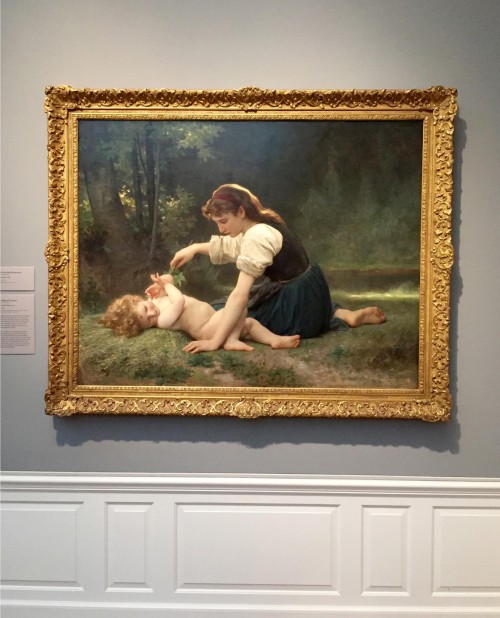 William-Adolphe Bouguereau, Nature’s Fan, 1881: This piece was glowy, impish, and pastoral—I loved it for no particular reason really (a testament to how little I think about/look at painting). 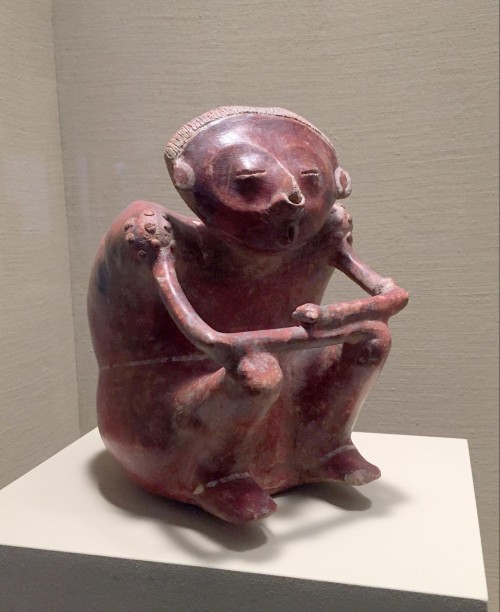 Have obviously not spent enough time looking at ancient Mesoamerican artworks because this seated figure from Mexico ca. 300 B.C. was totally ancient aliens in all the best ways. I text this picture to Jason as something about this little man reminds me of him. 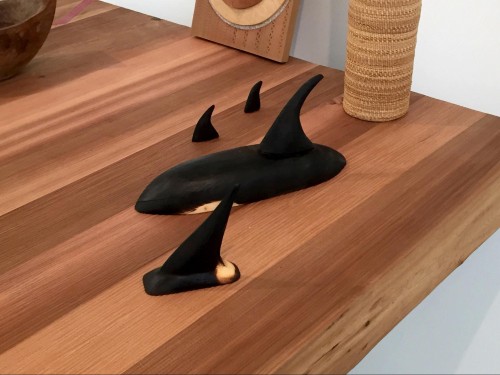 More carving—this one in cedar on view on the Contemporary Native American gallery, Greg Robinson’s nsayka phik’w (2015). The whole tabletop piece is beautiful, but I most love this orca moment. 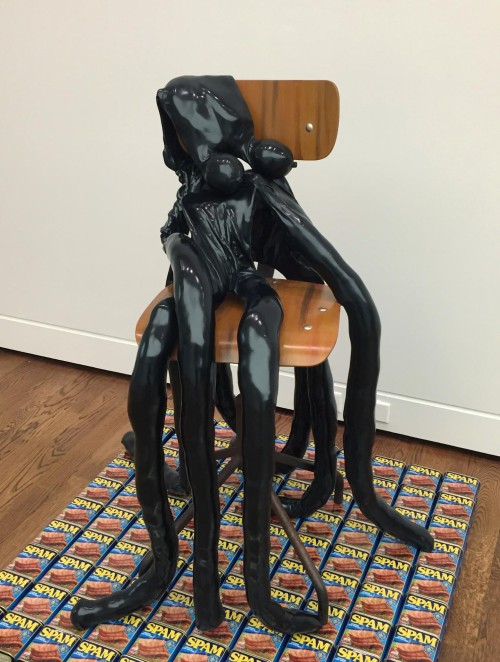 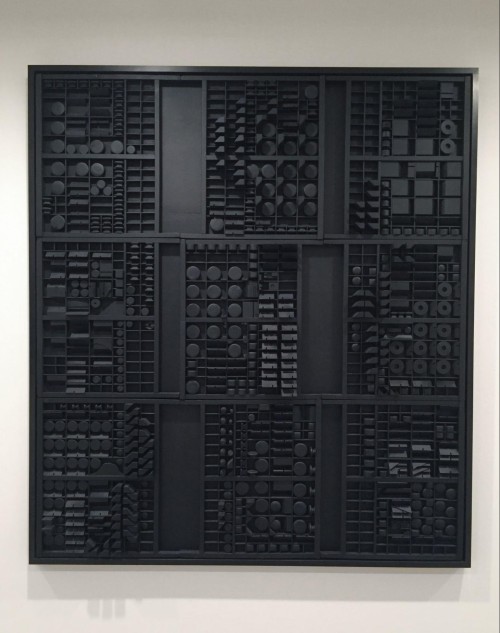 I’ve found “the winner.” There was an enormous, beloved Louise Nevelson work on the top floor of Cooper Union when I was going there (probably still there), so I always go to this young, naive, tender undergrad place when I see her work. Why don’t we hear more about Nevelson? Surely we can substitute all the institutional chatter about the Ab-Ex/modernist dudes for like…five minutes of hype about Nevelson. Her modular, dark, computational monoliths still feel so relevant to me. This one was titled End of Day Nightscape II from 1973.

By 2 p.m. I’m back at Reed, giving my talk. I get to finally meet Manuel Arturo Abreu IRL. Afterward, I spend the rest of the afternoon getting drinks with Tony Chenkra, Flynn Casey, and Michael Van Horn who run Muscle Beach and Veronica, respectively.

At 7:30 p.m. we head to Yale Union for the Michael Smith performance. I have seen Smith lecture before, but this is my first Baby Ikki experience. Grubby little fingers in brown cakes, selfie sticks, earnest pervert songs, cooing, and wobbling—an appropriate anti-hero semi-climax to my week: 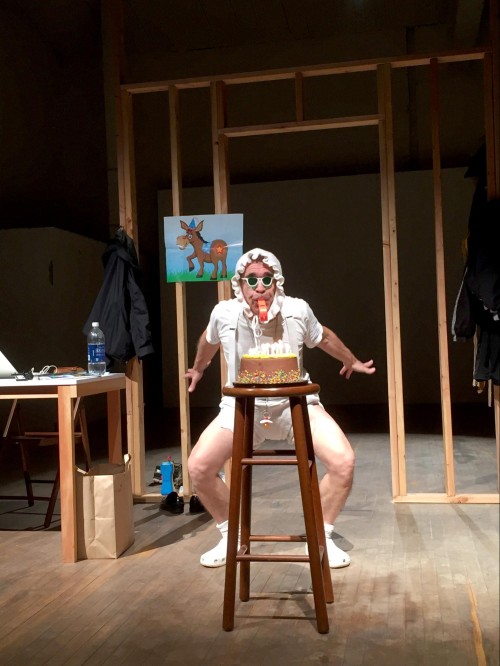