Simonetti files about a week following the opening of her current show, while the artist and her partner dog-sit for a friend. The dog is named Tony. There is plenty of podcast consumption—including Ear Hustle, which is produced by inmates at San Quentin State Prison in California—and a lot of art-related activity. Also, the Instagram account of a wild horse sanctuary is visited and research is done on log cabin–style furniture. All that and more, below! —John Chiaverina

I wake up and check my weather app. It’s a warm hazy night for anyone out in New Delhi right now. It’s a cloudy, damp morning for my mom in Vancouver. It’s a scorching and still night at the Dadaab refugee camp in Garissa. I check the weather app multiple times and locations per day, somewhat compulsively.

Work out at the YMCA, listen to Earl Sweatshirt (a weird choice for the gym, but I went deep into an Earl Sweatshirt phase leading up to my show at Company [“Pledge”] bc it has all the things I needed: estranged/dead father figure, alienation, grief, etc).

I “clock in” at the studio, which is something I’ve started doing recently. I keep a calendar where I track my “actual” studio hours pretty diligently (I clock out for lunch breaks, I don’t count emails, outings for supplies, or writing this thing). The goal is to track how much time I’ve spent with pen-to-paper/chisel-to-rock/etc. It seems to give me a sense of accountability and structure, like I’m not just pissing my time into the ether.

My main project this month is to make new drawings for PACT to take to Art Brussels. I start by looking for source material. I find a website for a cattle hospital called Kamdhenu Mangal Parivar. Some of the images are brutal. I make preliminary sketches, write some notes to myself. While I work I stream Reveal (podcast). 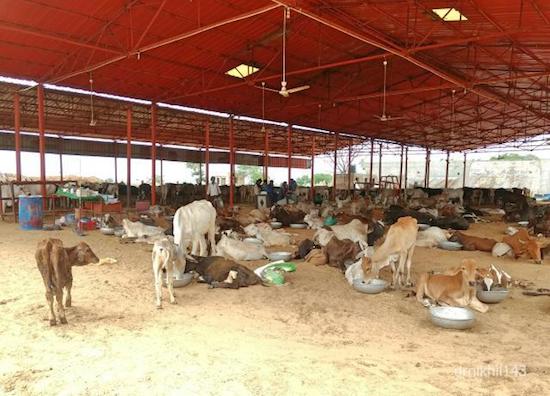 Anne Libby comes over to drops off her dog Tony. My partner Michael Assiff and I are dog-sitting Tony for the week while Anne goes to LA.

After dinner I open up the Slingshot journal Sigrid Lauren got for me at Red Emma’s Baltimore, which I write in very briefly every night.

Before bed I try to start a new book: bell hooks’ All About Love, but I can’t get into it. Instead, Michael reads to me from Harper’s, the lowlight of which is this little sentence: “Oceans are warming 40 percent faster than predicted five years ago.” Sweet dreams!

Walk Tony, listen to Debussy until my phone dies.

Studio. Start a drawing of an emaciated calf with a broken leg based on yesterday’s research. It’s taking me some time to switch gears into drawings after carving stone all winter. I get distracted finding the right music, eventually settle on Angelblood’s labia minora. (Angelblood is the black metal-adjacent project headed by Rita Ackermann and Lizzi Bougatsos from the early aughts, and I highly recommend.)

Stream Ear Hustle, a podcast made by prisoners in San Quentin. It’s so good. One of my favorite podcasts.

Take the subway to group show “Fire” at Baby Company curated by Ryan McNamara. On the way I finish reading Nawal El Saadawi’s Woman at Point Zero. The subway is my favorite place to read.

Before falling asleep, Michael and I stream A Way With Words with a 20-minute timer (an occasional bedtime ritual). A Way With Words is G-rated call-in radio show about language, and it is just quaint enough to drift off to.

Get back in bed, stream interview with Cornel West on Mehdi Hasan’s show Deconstructed.

Write a few notes for an artist talk I’m doing for NADA on Sunday.

Studio. Work on yesterday’s drawing. I’m not really feeling it, so I switch tasks and solder a stained glass piece I cut last week. While I work I stream A Phone Call with Paul, then Bookworm. I have a fantasy that I am seated beside Bookworm’s Michael Silverblatt on a long flight and he is forced to talk to me for 8 hours.

“Total Body Workout” aerobic glass at the YMCA. It’s sweaty, humiliating, and I need the endorphins.

Studio. I start drafting a new pattern for a stained glass sculpture, working in silence.

For dinner Michael makes a bunch of Lebanese food: falafels, tabouli, and hummus—all from scratch. He’s an incredible cook. We listen to Chapo Trap House’s coverage of CPAC while we eat.

Before bed, Michael and I read Roberto Bolaño’s story Police Rat as recommended by geetha thurairajah in relation to new work Michael is making. 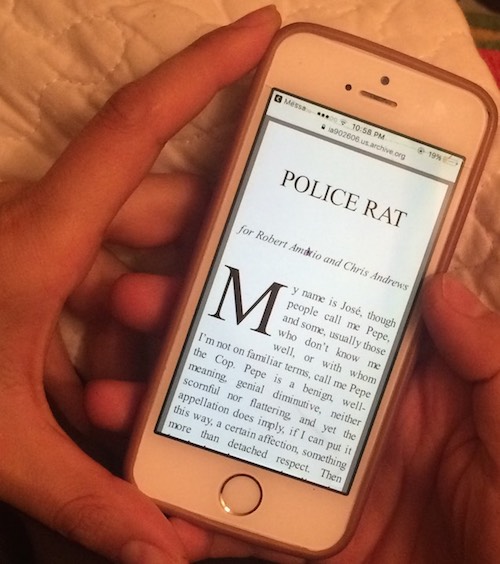 Studio. Working on my damn drawing. A few hours in, and I’m really not feeling it, so I start a new drawing of a cattle yoke. My mom calls, and we talk on speaker while I work. We talk about CONTRAPOINTS, which I recently introduced her to (starting with the classic episodes “Incels” and “ATG?”).

Make a massive pot of a borscht-like soup. Stream the newest episode of Invisibilia called “The Fifth Vital Sign,” which focuses on how the way we think about physical pain has changed over time, and its effect on Amplified Pain Syndrome.

Gmail and busy work. I spend an hour registering my music with SOCAN to collect royalties for some songs that were used in the Canadian film Below Her Mouth. I have been procrastinating on doing this, but I’d promised myself I would deal with it after “Pledge” opened.

I take the subway to Deli Gallery to see Sarah Zapata’s show “Of This World Rather.” Sarah and I both spent this winter hibernating from social life to work on our shows, and we would occasionally check in with each other for a pep talk. I have serious respect for her work as someone who also has a physically demanding and labor intensive practice.

Before bed I spend 20 minutes on Instagram after discovering the account for a wild horse sanctuary @skydogsanctuary.

Waste some time on wikipedia. (https://en.wikipedia.org/wiki/Lawsuits_against_God)

Work on my cattle yoke drawing while FaceTiming with Sarah Friend.

In the afternoon Michael and I go to The Independent. Highlights: Kate Newby’s wind chimes at COOPER COLE (the “instrument” potion of which are a series of bronze casts of pieces of found rope), Gil Batle’s ostrich egg carvings and elaborate pen drawings (this is the first time seeing Batle’s work in person, and I learn he had been incarcerated in San Quentin—a place that has been floating in my imagination recently from listening to Ear Hustle), Andrew Ross’ police sculpture (Andrew is a friend, and his work is great), Stuart Middleton’s cow drawing (I have been particularly interested in Middleton’s cow series for the obvious overlap in subject matter, but also because he has cited Ariana Reine’s The Cow as an influence). 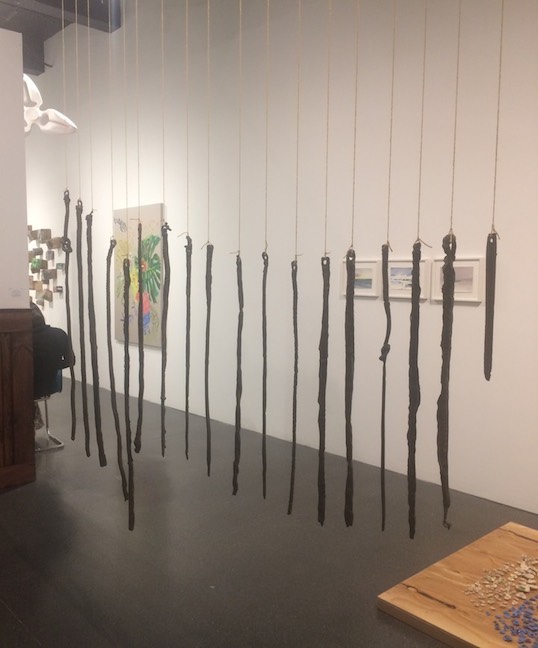 Dinner at Dimes with Jashin Friedrich and Jessica Butler.

I listen to this one Ravel song on the subway ride home until my phone dies.

Before falling asleep I scroll through Ebay looking at Brutalist jewelry.

Quick trip to the library to return a book for Michael (Pictures of a Gone City by Richard Walker).

Take the subway to Company, listen to Kendrick Lamar. I do my artist talk thing for NADA. The tour goes well, and a few friends hang around after. Angal Field and I talk about their plans for grad school.

Back at the studio. I can’t focus on my work, so I opt for a nap on the couch. I have read that there are certain lengths of time that one should nap to optimize alertness. Clearly I have miscalculated because I wake up lightheaded and groggy.

Take Tony for what seems like his millionth walk of the day, listen to Denzel Curry’s “ULT” one and a half times before my phone dies.

I write a few emails then spend the rest of the evening watching Netflix (Dating Around) and scrolling through bullshit online.

Wake up to an email from Queens Library that two of my book requests have arrived. I jog over (very excited), only to discover that Nawal Sadawl’s autobiography is in Arabic (which I don’t read), and the Klaus Theweleit is volume II. I had been reading volume I of Male Fantasies last month before I had to return it, so I had been looking forward to picking up where I’d left off. I return Sadawl, and check out Theweleit. 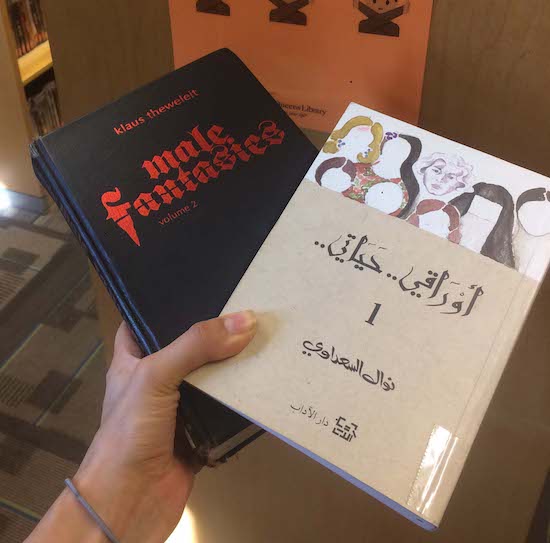 Studio. Work on glass, listen to Jennifer Castle. Quick trip to the hardware store for bolt cutters, then I cut and solder some zinc rods to make a frame for the piece.

Spend an hour doing research for another drawing. I have had it in my head to draw a kitschy wooden bed that has the essence of log cabin… I want the bed to contain a kind of nostalgia for an imagined/idealized rustic Americana. I eventually find a Colorado-based company called William’s Log Furniture Co, and their bed frames are exactly what I’ve had in mind.

Heat up leftover borscht for dinner.

Back to studio. I make sketches based on the bed frames I found earlier today, streaming music while I work. The intro to Vince Staples “Don’t Get Chipped” catches my ear, so I download the track and open it in Ableton. I cut out a few samples, process the loops with Soundtoy’s Crystallizer, then slice to MIDI. (I don’t usually work in so many different mediums in one day, but after months of exclusively carving stone I’m giving myself a long leash in the studio to follow my nose.)

Stream a rebroadcast episode of A Way With Words with a 20-minute timer before falling asleep. Highlight: the word sialogogic, superlative adjective, meaning to increase the flow of saliva.

What to Watch in December: The 25 Best New Streaming Releases on HBO Max, Disney+ and Netflix