Marcus Jahmal is an artist currently based in Brooklyn. His latest exhibition, titled “Solid Ghosts,” is on view at Almine Rech in Brussels through May 19. The self-taught artist staged his debut solo show in 2016 at the Lower East Side gallery Canada, which received a positive notice from the New York Times. In January 2018, Jahmal curated the group exhibition “Yard Show” at Shrine Gallery in New York. The show featured a range of artists of the African diaspora, and included work from the late Southern American master William Hawkins.

Jahmal’s Consumer Report takes us all on a Euro Trip, staged in the wake of his recent opening in Brussels. Things start in Paris before dipping into Nice, France, and finally ending in Rome. Along the way, museums are visited, gelato is eaten, and we get a scene report documenting the commercial madness outside of the Roman Colosseum. (Though there is no social media—Jahmal doesn’t use it.) Also, the eternal rap classic “Bucktown” by Smif-N-Wessun gets listened to on a train while looking out at the French countryside. Doesn’t get much better than that. All that and a ton more, below. —John Chiaverina

Woke up, said farewell to my parents who had flights back to NYC that morning. They had been staying with us for a week prior in Brussels for my solo show. We got dressed and headed to our go-to vegan breakfast spot, JahJah in 18th arrondissement. Had bowls of the day and smoothies. Fueled up. 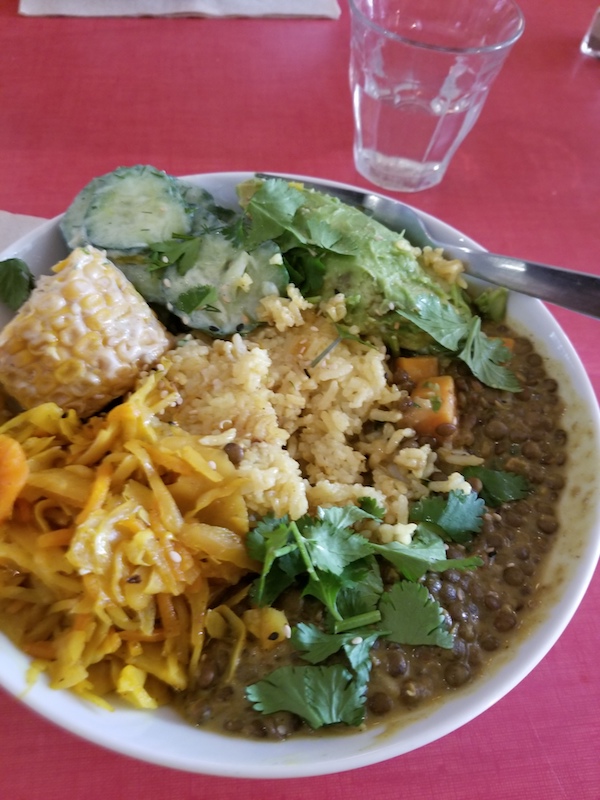 Did some thrift shopping. Found a couple cool pieces. Stopped at a cool Ayurvedic shop, where we learned about acupressure. Which apparently has been used long before acupuncture. Who knew?

Had a meeting over tea and coffee with Loic from Centre Pompidou. He specializes in the contemporary arts from the Middle East and Asia. He politely offered to get us in the library and exhibition space. There was a Sheila Hicks show going on, so we stopped in. I had never heard of the artist before and later learned she was a US expat living in Paris for many years.

The show consisted of giant balls of colored fabric and to me, transcended “craft art” beautifully into a more serious form that was larger than life. It gave me a very eastern vibe. Of course we had to check out the book store but as there was so much to see I wound up not buying anything.

Ubered over to Musee du Quai Branly aboriginal art museum. Hands down our favorite museum in Paris. We spent hours in the permanent collection where there were tons of indigenous spiritual artifacts, jewelry, and garb from the Americas, Oceana and Africa.

We then had to rush to the new exhibit “Ghosts and Hells: The Underworld in Asian art,” which shows ghosts of Asia as depicted throughout history and cinema. It was a very immersive exhibit with things from old Thai and Japanese films to projections, paintings, drawings, and massive sculptures. It seemed to be where Murakami gets his inspiration. It definitely inspired us. 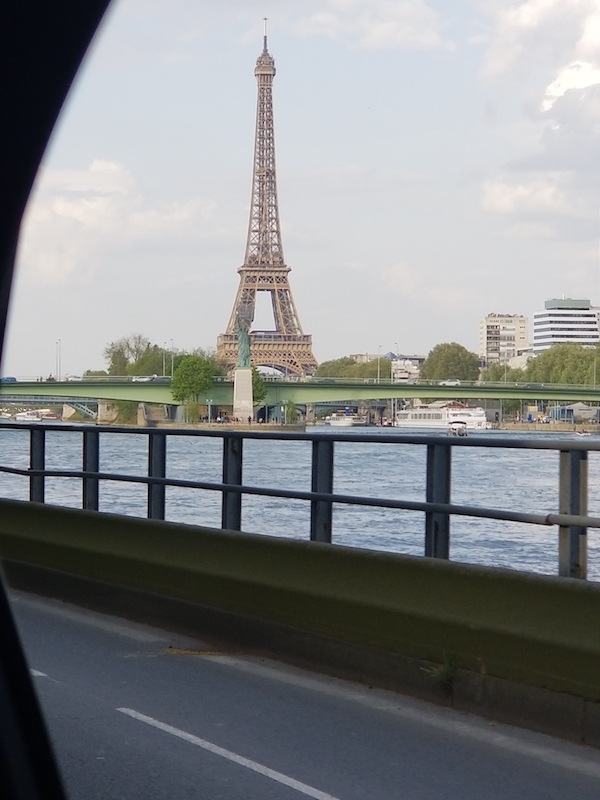 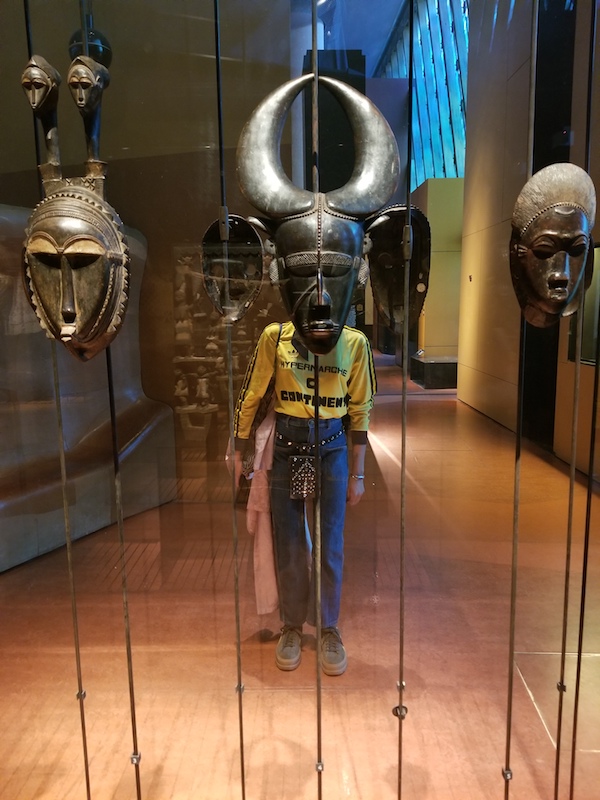 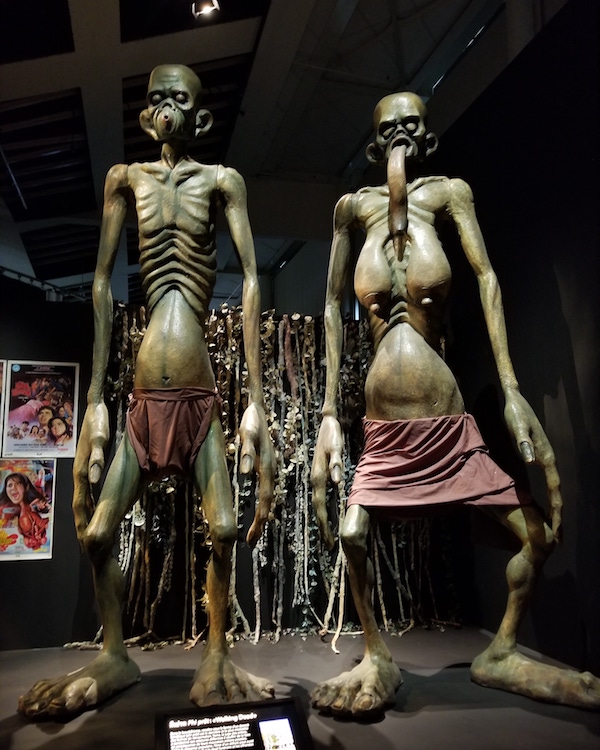 Woke up, rush packed. Train to catch to Nice, France.

Scarfed down acai bowls in a bio cafe near train station. Portions were small. We ordered 5 different desserts for our train ride & later regretted each one.

Arriving on the train very quickly we noticed we were on the wrong cart so we hurriedly grabbed our luggage and got back off to the platform. One of the train workers informed us that our cart was way down five carts away with 5 minutes left to departure. We hysterically rushed down the platform only to get even more confused when the numbers on the train weren’t adding up, in a panic we asked another train worker, she nonchalantly told us our train was back the other way and then proceeded to have a personal conversation with a co-worker. With only 1 minute left we jumped on a first class cart which was much better than second class. The train started moving 30 seconds after getting on. I learned that day how unreliable train workers are. After napping, taking in beautiful landscapes, reading The Assassination of Fred Hampton and listening to jazz and ’90s hip hop, we were finally almost there. None of the train workers ever came to check our tickets. 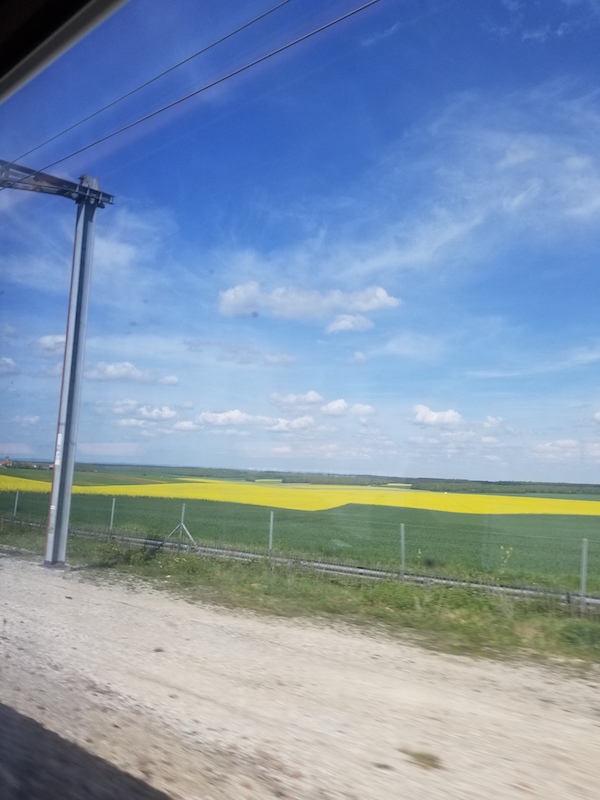 Woke up. Had some chamomile tea.

Walked over to a local veg joint called Caju. The server was complimenting our style the minute we sat down. Ate some burgers, portions were small, juice and smoothies were good, oh yeah, and a pear ginger cake for take away. 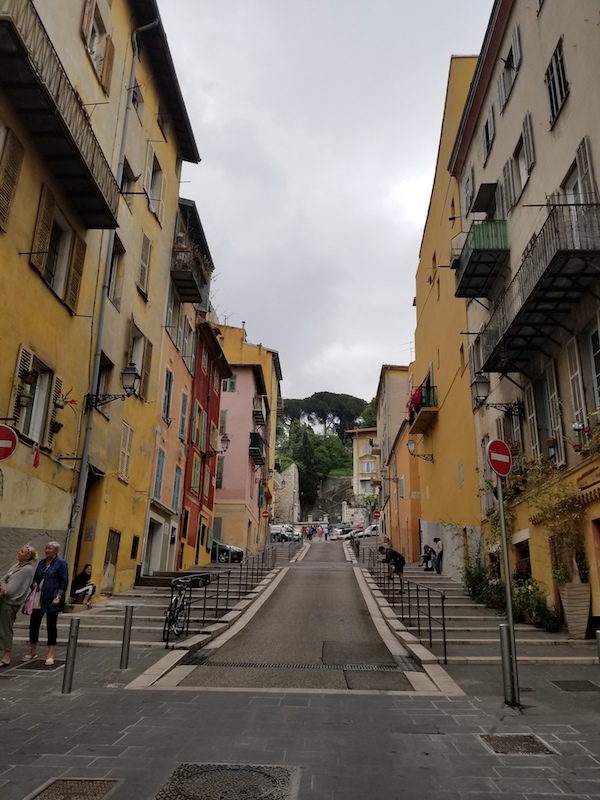 Ubered over to Marc Chagall house museum. Ate the pear ginger cake in car. I like Chagall’s work, but didn’t enjoy the museum as much. It could have been that two rooms were closed for renovation and the works in the first two rooms were large-format heavily saturated hues and each painting very similar to the next, so it wasn’t much variety. The grounds landscaping and large ceramic piece outside were impressive though.

We took a 20-minute hike uphill on Rue Cimiez. Arriving on the grounds, we noticed several sites from the Roman theatre ruins. Entering the museum, we were greeted by large-scale cut outs and an ancient Egyptian sculpture borrowed from the Louvre. The nose was cut off.

We’ve seen better works from Matisse but a couple paintings we’ve never seen were a delightful surprise. The museum is situated on top of a hill overlooking the city of Nice, we walked through a garden and caught the view and a breeze. 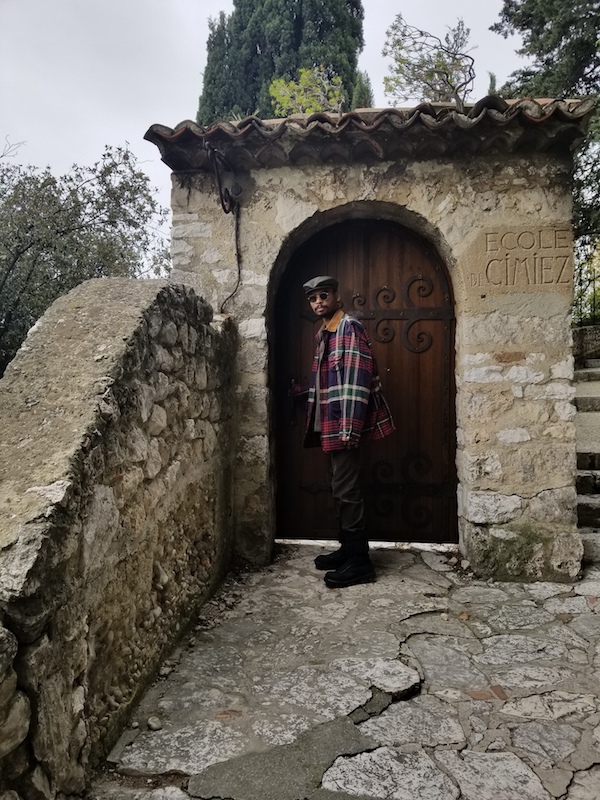 Walked around and ended up in a shopping area which was kind of annoying. Nothing appealed so we decided to do some grocery shopping for dinner. Picked up some vegetables, Chablis and pasta and snacks. 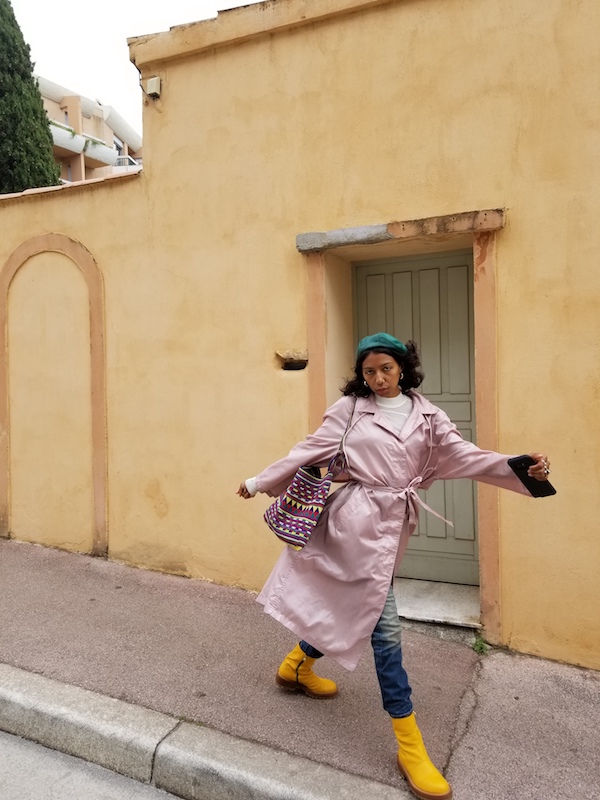 Qi hooked up basmati rice with a spicy squash, chickpea, and tomato Indian-style dish. I watched YouTube videos of Tupac-alive conspiracies. I believe it. 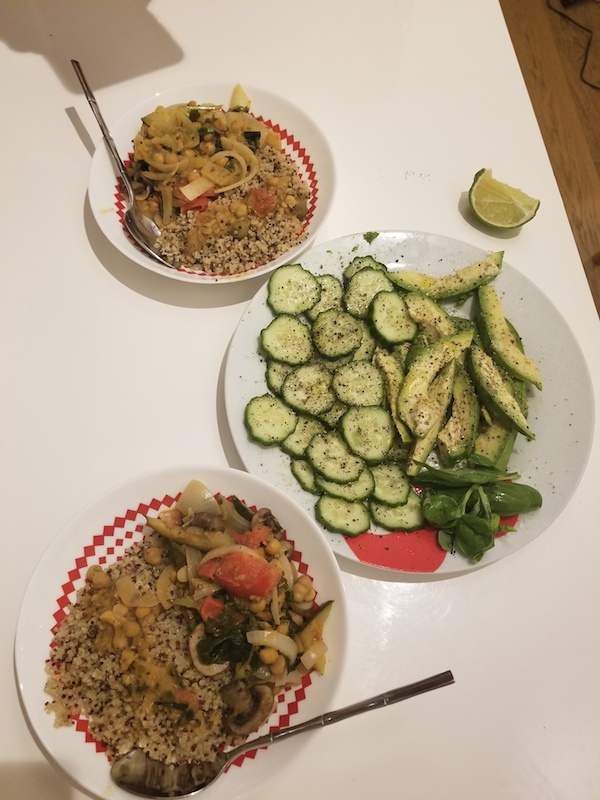 Hearing commotion outside our window we decided to look out and saw around 4-5 guys performing Brazilian Capoeira, which we had been talking about recently. We were so impressed we threw some euros down. They were happy and so were we.

Called it a night.

Had a smoothie and quinoa burger at a local spot. It wasn’t the best place but there wasn’t many other breakfast options.

Went up to castle of Nice, took in 360 views of the city and Mediterranean sea. 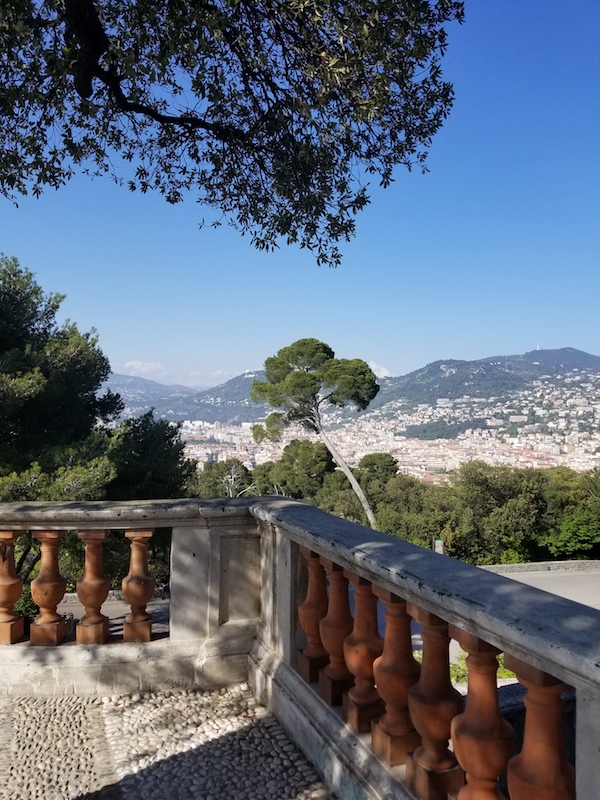 Sketched in one of the many secret spots on the castle hill. 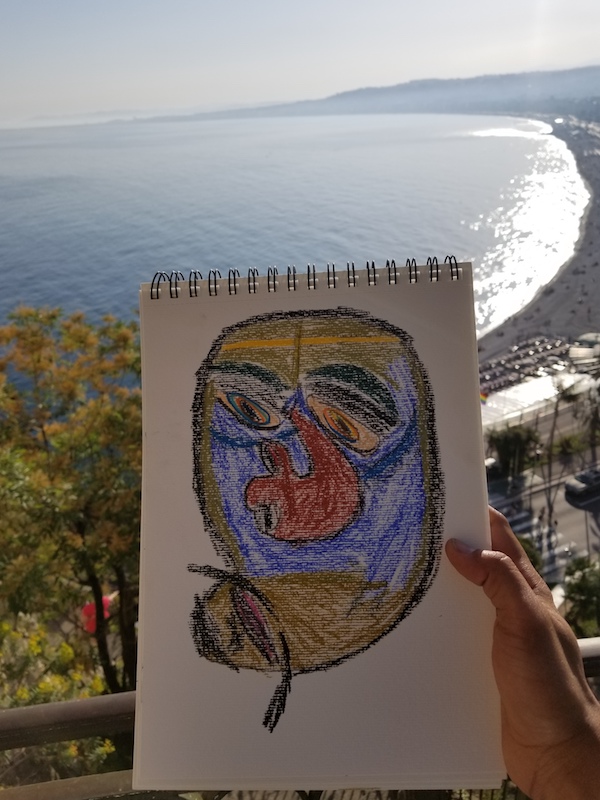 Went to the beach and sat on the rocks. People were diving in but we didn’t have any bathing suits, so we just dipped our feet in. 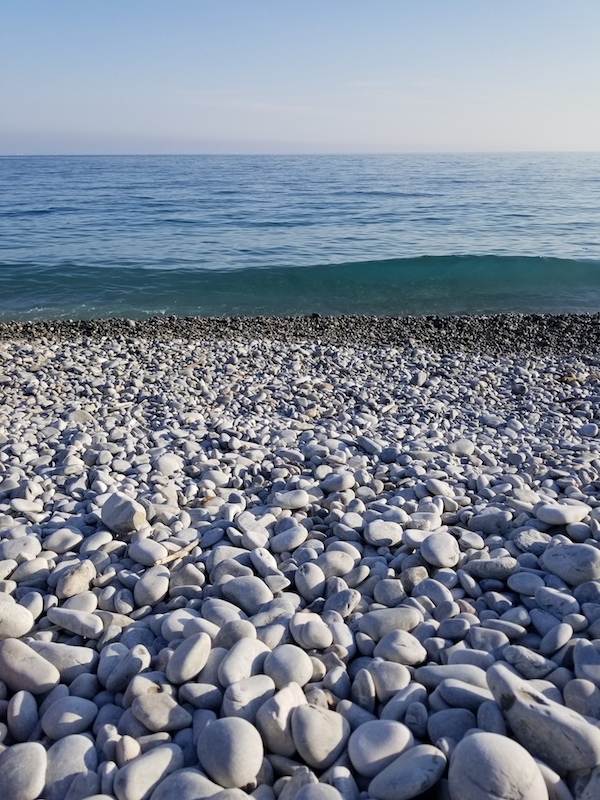 Caught a quick flight to Rome.

Arrived at the hotel which we had booked online to only find it was a horror movie motel. They stuffed us into a smoker’s room overlooking a creepy farm. It really felt like that movie where all of the hotel staff was in on a plot to kill the guests… Used their free wifi to book Airbnb… Then escaped.

Walked around the city center aimlessly, and stumbled upon the Vatican. There were so many long lines everywhere with tourists waiting to go in and street peddlers selling mini colosseums and popes. We jetted out of there and walked some more and ended up on yet another hill overlooking the city of Rome. 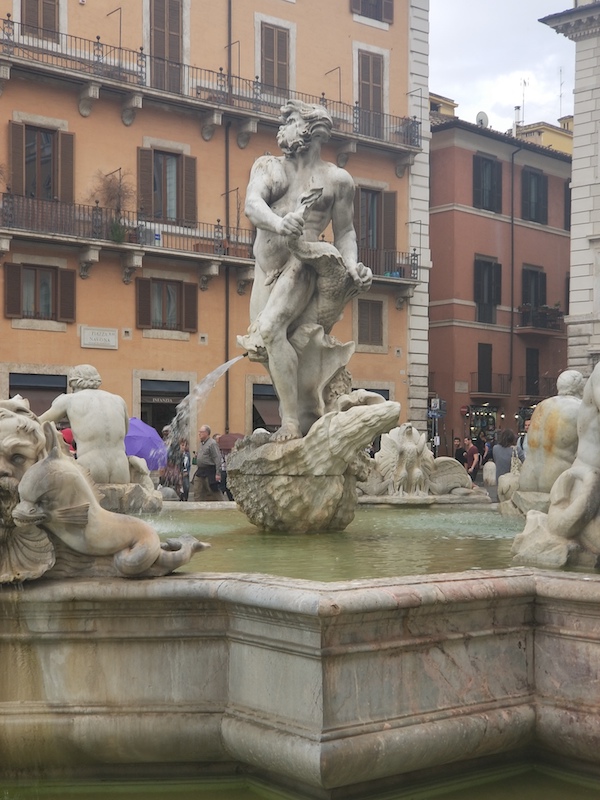 Went to the colosseum. Major tourist trap. The street peddlers were in full effect. One guy actually threw a bracelet at us in hope we would catch it and then have to pay. We let it drop. There were so many hustlers down there that we just put tunnel vision on and proceeded to go inside. A friend told me that it didn’t used to be that way and that when he first moved to Rome, the Colosseum was free entry and you could go there and smoke a joint if you wanted. 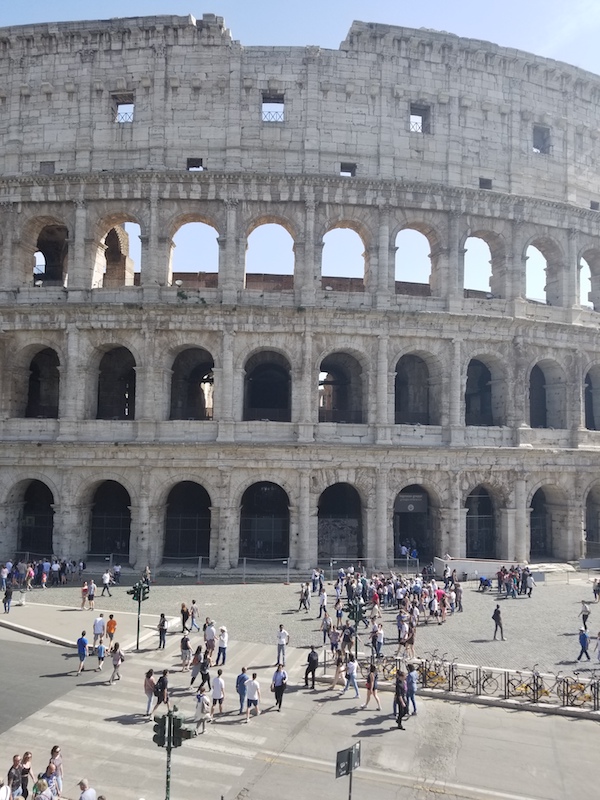 Lunch at flower burger. Where they have pink, black & blue buns. 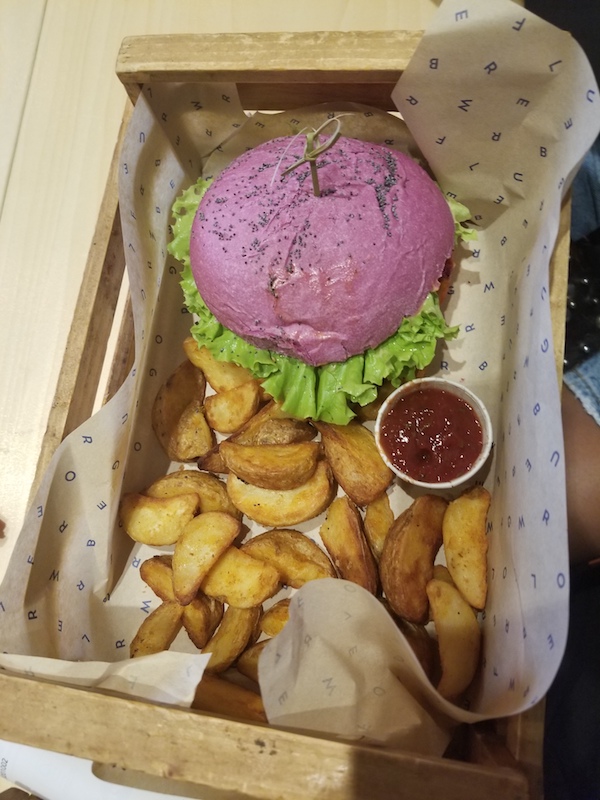 Had Mediterranean dinner with a friend of my father, Jay, who’s been living in Rome for 20 years. They used to hang out at the Paradise Garage in the 80s where Jay won a dance contest and was a close associate of Basquiat (fun fact). 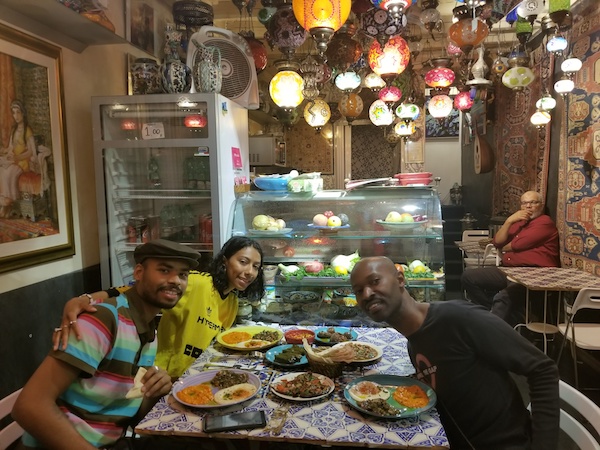 Walked around Rome at night. Took in some architecture and public art. Drank some local wine, got harassed by five different street peddlers and watched all the stunts being pulled, like this one guy who hid himself with a blanket and stroller, he poked his head out of the stroller as if he was a baby, and scared people walking by. This was the best one yet. 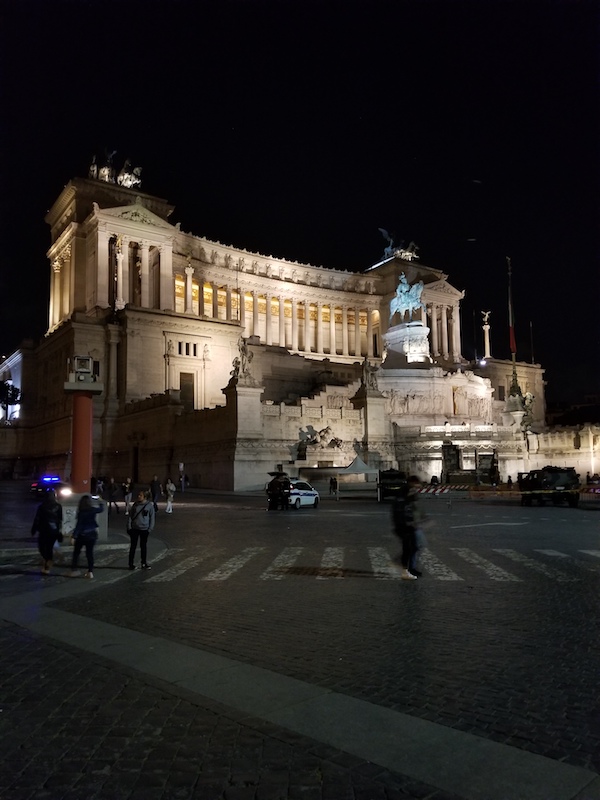 Called it a night.

Woke up. Had some tea.

Headed out for the day. Had pizza for breakfast. Only in Rome. 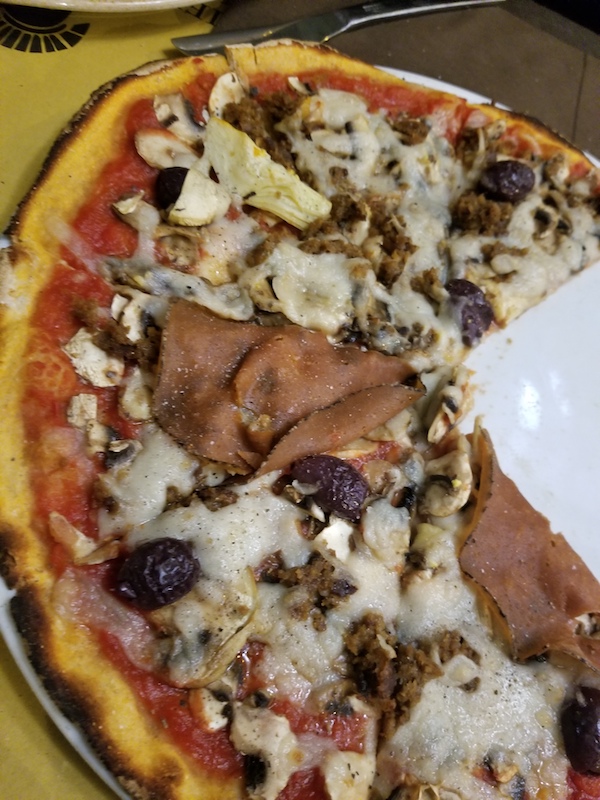 Took a long walk to Scuderie del Quirinale, where there was a Hiroshige exposition happening. Extremely well-executed show. The Skira bookshop there was an experience. Picked up Japanese Ukiyo-e books and things. 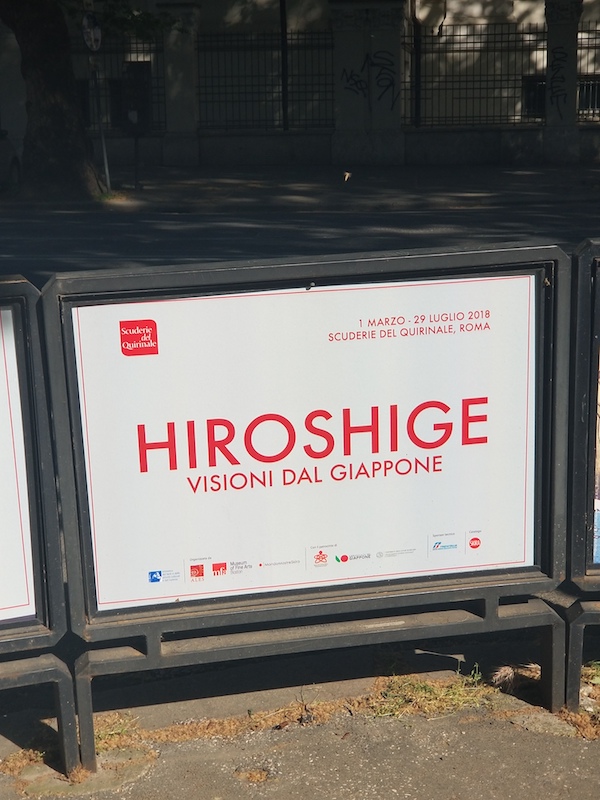 Found some good vintage shops. Picked up some rare finds for good prices. Rome by far had better thrift shops than Paris. 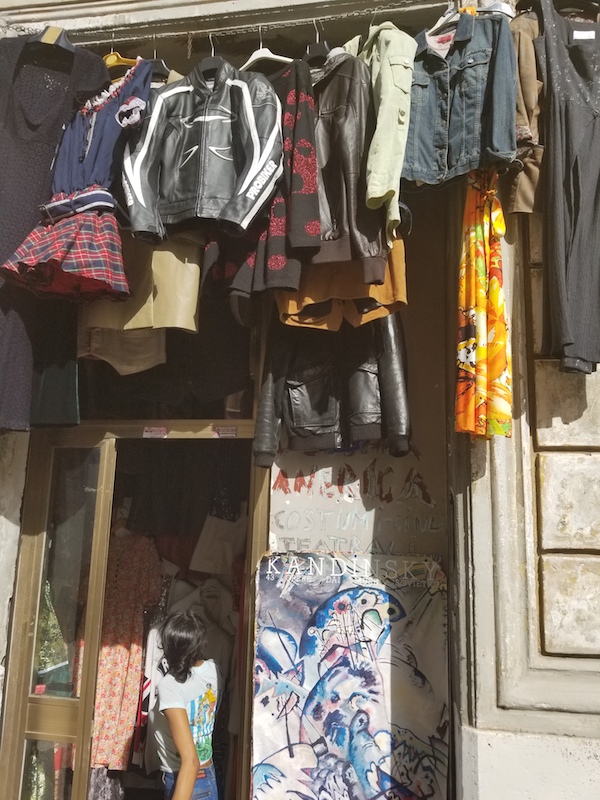 Went for gelato. Had strawberry and Qi had mango, blackberry, and then went back to buy another cone of lemon. Everyone was eating gelato, so we did the tourist thing to do and got some. 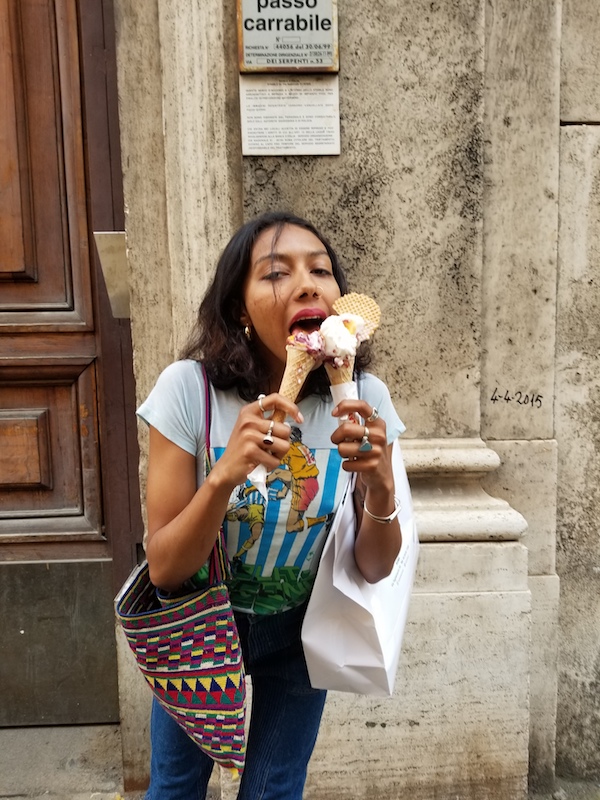 Went grocery shopping. Bought a few fruits, veggies and basil oil to cook with. There was prosciutto everywhere, which I used to love before becoming vegan. I was being tested but I left it where it was.

Went to the flat, sketched and vibed out to some tunes.

Cooked dinner. Ate. Then went out to walk it off and get some dessert. We found a vegan delicate chocolate place called Grezzo. We walked back passing by drunk people and laughed hard at things we heard people saying. They probably weren’t that funny but we were so high on life that it seemed that way.

Watched some old Japanese films that we learned of from the Ghosts exposition at Musee du Quai Branly in Paris. Had a realization that a reoccurring theme of our travels was Asian art, tourist traps, and scenic views.

Tokaido Yotsuya Kaiden (aka The Ghost of Yotsuya) (1959)