New York artist Melissa Brown works in a variety of media. To name some: currency-inspired woodcuts, stop motion animation, predictive card decks, screenprints, and stencil paintings. She has mounted solo exhibitions at New York City galleries Essex Flowers, Kansas, Bellwether, CANADA, and Winkleman and internationally at Kenny Schacter, ROVE in London and Roberto Paradise in Puerto Rico. Her work has been reviewed in the New York Times, Art in America, Artforum and Art on Paper. In addition to all this, Brown also organizes poker games with artists at galleries like Where and Essex Flowers, where the stakes are high—each artist brings to the table an original work to bet with.

Brown’s Consumer Reports is a week spent listening to quite a bit of sample-based music and looking at quite a bit of Instagram. Also, Brown researches fake-currency (a thread that runs through a lot her work) and ponders art world fashion choices. Additionally, we find out how a character in a Robert Anton Wilson novel is pretty much the composite of two iconic David Duchovny television roles. All this and more below, take a look. –John Chiaverina

Back in the day I was part of a music project called Slow Jams Band. Slow Jams made tracks by collaging sampled music, and during this time I got into other sample-based artists like Vicky Bennett and Plunderphonics. Vicky Bennett now has a 24 hour internet stream of her sound archive. I’m a devoted fan of her free-use philosophy and I check out her station almost every day. The stream is random and much of the content is about randomness, so you never know what might be playing.

This morning she was playing a vintage radio broadcast about Iannis Xenakis which discussed how he made his compositions using probability. The radio host also mentioned Hanne Darboven, a conceptual musician I had never heard of; he described her music as sounding like a cat tinkling and noodling around on a piano. It struck me as a good idea for a painting.

I keep an ongoing phone notepad list of things people mention in passing that I want to look up. Wally Badarou “Echoes” mentioned by Annie Pearlman was on the list, I checked out the album on YouTube.

Read a few articles in the Huff Post and NY Times about the German Wings pilot. The Huff Post included some hearsay from Lubitz’s girlfriend; she recalls a quote: “One day I’ll do something that will change the whole system and everyone will know my name and remember it.”

Looked up Darboven on YouTube hoping to find a cat tinkling on the piano. No dice.

I find myself most addicted to Instagram of all social media. I try to put limits on how much I look at it/get distracted by it, but break these limits continuously. I find the constant stream of random images – windows into other people’s lives and art – to be irresistible. The daily oracle.

On my way home from teaching silkscreen in the Bronx, I put down my book, The Illuminatus Trilogy! By Robert Anton Wilson and check IG while crossing over the Manhattan Bridge on the subway. There are about 3 minutes when the internet is available on the train. You can watch everyone start to dig in their bags after Canal Street and whip out their phones when the train emerges from underground, myself included. 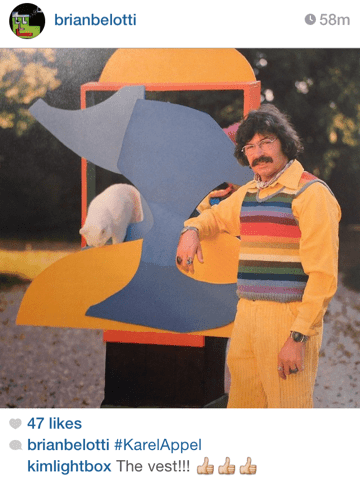 The Illuminatus Trilogy! is a satirical adventure story about a cop’s research into the existence of the Illuminati. The narrative voice sounds like a hippie stoner cop version of The X-Files‘ Agent Mulder. Actually, the main character could be an amalgamation of Mulder and Duchovny’s other sex-crazed character, Hank Moody. I’m not sure I would recommend watching all seasons of Californication on Netflix, which defined my Fall TV watching with Ezra. Ezra is a writer and I think he enjoyed the notion of a contemporary author as a drunken, sneaker-and-blazer wearing carouser at whom successful, attractive women throw themselves. I have similar fantastical expectations that an artist can make colorful, patterned, tacky fashion choices while being admired for aesthetic wisdom and attracting hordes of strapping, metro-sexual men with nice buns. 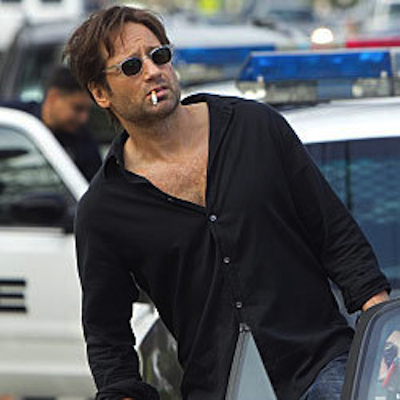 For most of the day, I’m down for the count with a stomach virus but I’m consoled by Michael Mahalchick’s post: 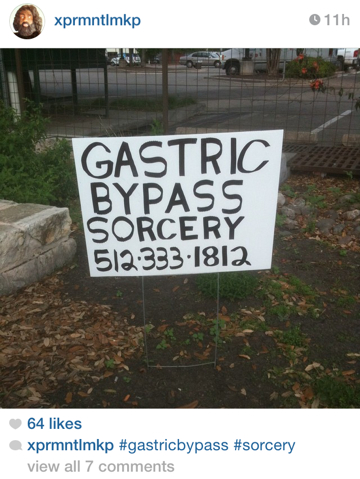 I sign up for a Hulu week-long “free trial” (forget to cancel at anytime), so I can watch Season 3 of Kroll Show while recovering on the couch. I very much had freaky dreams about Bobby Bottleservice.

I check in with Vicky Bennett’s 24 stream when I get to the studio; she’s playing an old episode of Radio Broadcast from WFMU about the side projects of Throbbing Gristle. The last time I thought about Throbbing Gristle was in my basement in high school. I moved my bedroom down there and set up a studio/hangout area. My tape deck ate my Throbbing Gristle cassette and that was the last I heard of them. So far, I hadn’t mourned the loss.

Having enough of the Gristle stream, I checked my notepad list and checked out Awesome Tapes from Africa on Soundcloud and also King Coya. I’m always on the hunt for latin dance music. Some of my recent favorites include Chancha Via Circuito, Fauna and Chicha Libre.

I took the Weehawken Ferry across the Hudson to my cousin’s house in Jersey. I made tomato sauce for Easter manicotti while listening to my cousin’s Steely Dan Pandora station. Her apartment is high up on the Palisades facing the West Side of Manhattan. Her balcony looks like a set from a 90’s movie about Wall Street. We did several google map searches to figure out if we were facing Grant’s Tomb.

I check out Trudy Benson’s opening via IG; I love how the painted shapes seem to float in front of the canvas.

I concluded the “home for the holidays” experience by falling asleep on an air mattress watching Goodfellas.

The TV is on in the background all day.

I read the news, check email, deal with some job-related issues.

At the studio, I listen to The Future Sounds of Buenos Aires and Girl Talk “Feed the Animals” on Spotify.

I spend some quality time on eBay looking at paper money designed for board games. I contact a few sellers trying to find out who designed the currency for Pay Day. 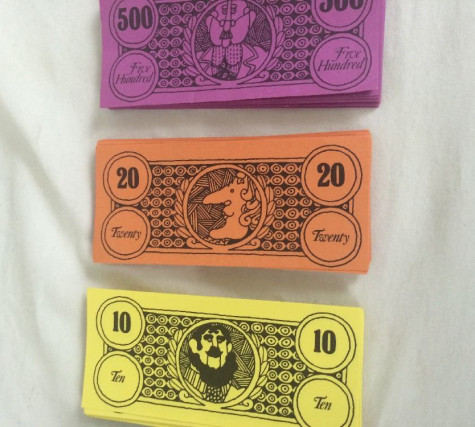 I end up searching a thread about Parker Brothers games. It seems that the object of the first “bored” game (Banking 1883) and almost all board games since by Parker Brothers is to try and earn money; a metaphor and rehearsal for living life, I suppose? I’ve never been great at board games. I find the social strategy and randomness of card games much more interesting.

Caught up on a few days worth of emails.

I initiate a text comparison with Lucy and Rafael who run Where, a gallery in Bushwick, about recent emoji use.

Checked Facebook and IG. Kenny Schachter put up a new site of his work and other artists that he has shown in the past.I miss the steel-cage match style gallery he used to have on the West Side of Manhattan.

Jerry Saltz posts a picture of himself at the Philly art museum in front of the Rocky Statue. I have a similar picture taken when that statue was first put at the top of the steps shortly after the release of Rocky III. It was later moved to the Spectrum amphitheater in South Philly and was recently returned to the Art Museum but now at the bottom of the steps. I like that Philly has established Rocky Balboa as a symbol of cultural and artistic achievement. 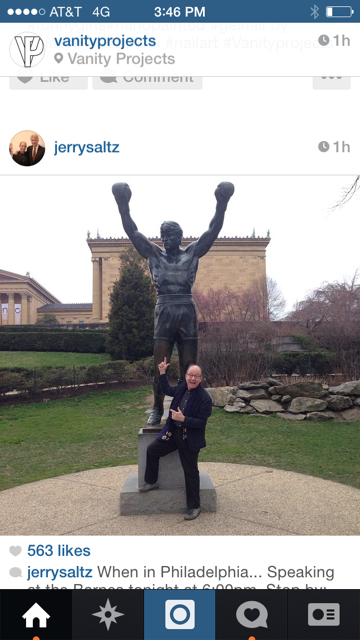 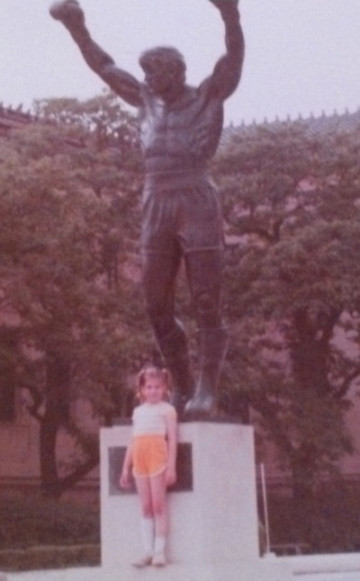