Paul McMahon is a musician and artist living in Woodstock, New York. Highlights from his varied and legendary career include having work in the 2009 “Pictures Generation” exhibition at the Metropolitan Museum of Art, appearances on the Soupy Sales television show, and over 10 albums of original music. He is currently the proprietor of the Mothership BnB, an everything center in Woodstock, and a single father of twin girls, now 15. He had a kundalini rising experience in 1988 and in 1993 the Goddess spoke inside his head and told him he is King of the Universe.

We enter the relative serenity of pre-election America in this Woodstock week with McMahon. New music is recorded using the program GarageBand, while old music is transferred from cassette onto the artist’s laptop. The public radio show WAMC Roundtable is listened to, with McMahon even writing in his thoughts on the election, which end up getting shared on-air. Plus, art openings at the Mothership, experiments with the Microsoft Word “voice to text” function, and much more, below. —John Chiaverina

Turned on WAMC.FM for NPR news a day after Hillary Clinton’s collapse at the 9/11 ceremony. I listen to it first in the kitchen. 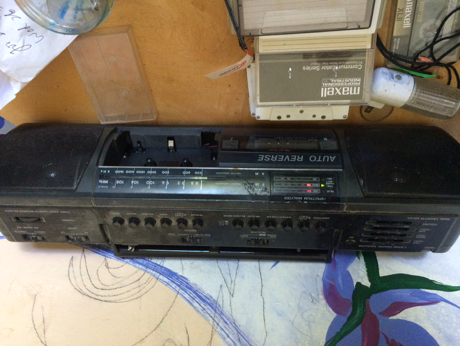 And then in my studio/office on a very old dual cassette boombox. One of the cassette deck doors is missing and it must be where the logo was. I can’t tell even what brand it is. The radio and one cassette player still work but it no longer dubs. 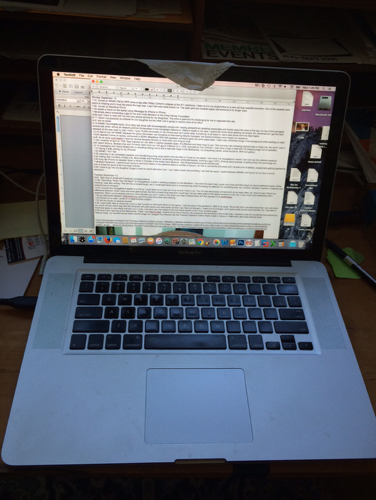 Texted a friend on the laptop using iMessage for iPhone to iPhone.

Emails about scheduling a gig for me and Linda Montano at the Emily Harvey Foundation.

Now I have to go online to deal with my low-cost phone service for my daughters. The price is good but it’s challenging for me to negotiate their site.

I think I successfully re-ordered for one daughter but the other one is going to require more of an effort.

WAMC Roundtable starts. It’s a daily talk show with knowledgeable people with varying perspectives speaking reasonably and frankly about the news of the day. It’s free of the surrogate double-talk which afflicts all network political conversation in this benighted millennium. Hillary’s health is the topic. I spend the entire show deleting old emails. Ah, convenience! I get the feed weeded all the way back to July! I think I have 70,000 old emails on my iPhone and don’t know what, if anything, to do about it. Get a new phone from the Mad Hatter I guess.

Had to turn off WAMC because the great interviewer Joe Donahue is interviewing Alberto Gonzalez, the sound of whose voice makes me nauseous.

Opened iTunes on laptop, connected to SONY MegaBass SRS 202 speakers someone gave me some years back. I often play unfinished songs in the background while working on other stuff. As an early multi-tasker I have for several decades worked on more than one thing at once. 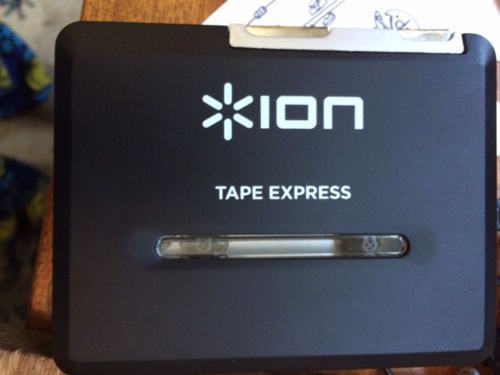 I recently bought an *ION Tape Express so I am able to digitize cassette tapes. It’s effective and dead easy to use. This morning I am reviewing digitized files of Daily Life, the band I was in with Glenn Branca, Barbara Ess, and Christine Hahn from our first gig at Stefan Eins’s 3 Mercer St in 1978, recorded by Dan Graham. I now have a way to harvest my shopping bags full of cassettes of local shows, rehearsals, songwriting sessions, etc.

Messaging with Sylvia Bullett who is donating folding chairs and a half-size fridge to the Mothership, my Everything Center, social sculpture, BnB, and gallery.

Taking a walk talking on my iPhone5. 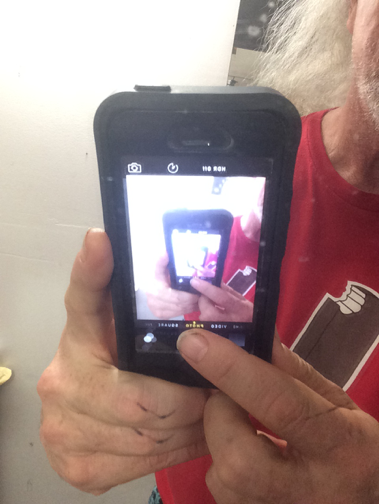 Listening to old unmarked cassette and transferring a long song sketch, “Blues for William Tell (Burroughs),” from the ’90s to iTunes on my laptop. I will move it to Garageband, where I can cut it up into coherent sections.

Rolling new transfers of Daily Life. More emails and Facebook, scheduling shows at the Mothership, booking a gig in NYC, thinking about process of getting Daily Life recordings out, all on Mac laptop.

Long call. iPhone on speaker about a show in October of the Smile Face Museum.

More Facebook. I spend hours trying to convince others of my opinions about a number of issues. I do this in comments and posts and I re-post a lot of articles, occasionally getting pranked by one of those too-good-to-be-true hoax memes. 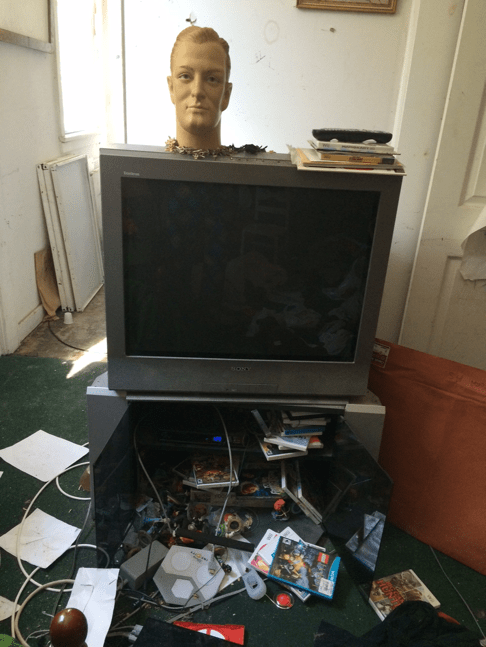 I have to go into my daughter Ginger’s room to watch television now. I can make it work now provided I can find the wand. I switch between MSNBC and European soccer for an hour or so for relaxation.

Sent out email blast for Gina Funk’s opening on the 13th via Vertical Response.

Recording “When You Fall Apart” on Garageband, a built-in tracking program on the MacBook. I recorded the basic track, guitar and vocal, and then began to record additional tracks. While tracking I was also writing. This felt like a breakthrough, as if I could add tracks sort of unconsciously while focusing my attention on something else. As I tracked I decided I wanted a melodica and ordered one on Amazon.

I burned Garageband sketch to a CD so I could listen to it in the car on an errand I had to run. The CD was atrociously unmixed and not an easy listen, so I have to see if there is a difference between what I hear and what gets burned. But the funniest thing was that I could hear the low rattle-static of the laptop keyboard in the mix. It was much more distracting than I expected. When you’re singing and your chair squeaks you don’t notice it, but when you hear it played back with the squeaks, it’s a deal-breaker.

Got distracted between motherhenning upcoming Gina Funk show and ordering.

Printed out a letter I wrote on a neighborhood subject.

Left the house on several errands.

I was finally able to utilize the “voice to text” function on Microsoft Word on the laptop. I told the story of the genesis in 1993 of my song “You’re My Guts” and discovered that I can just shoot my mouth off any which way and the computer will catch some and miss some but that I can then run through it, make a lot of changes, and it goes pretty quickly and smoothly. So I was able to finish that piece in one sitting and print out a copy on my Brother MFC 240C given to me by Chief Shoveller of Cowpies. I will soon post the essay in the comments section of the “Guts” Youtube vid. 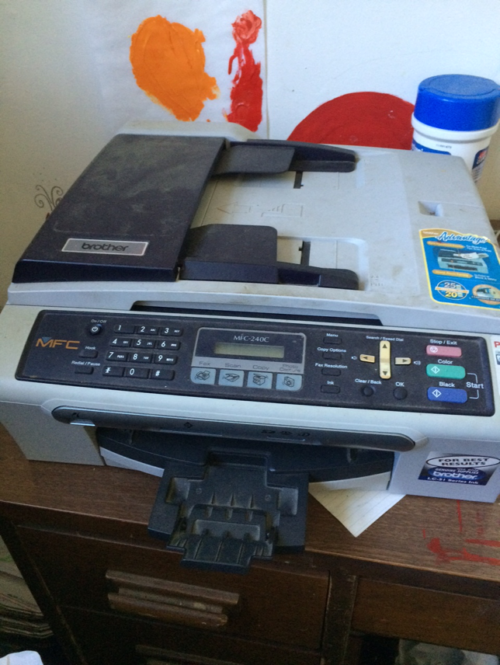 Gina Funk Opening at the Mothership. I photographed with iPhone5. 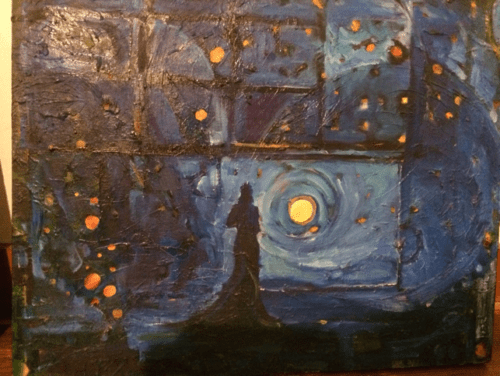 There I met Harpremjeet, a friend of my friend Ferenz, who produced the recording of “You’re My Guts.” I wanted to play her something he produced by Reema Datta, my favorite female Hindu sacred singer so I plugged my iPhone5 into this Thomas Collectors Edition Radio made in Taiwan in 1986 which also plays devices back. 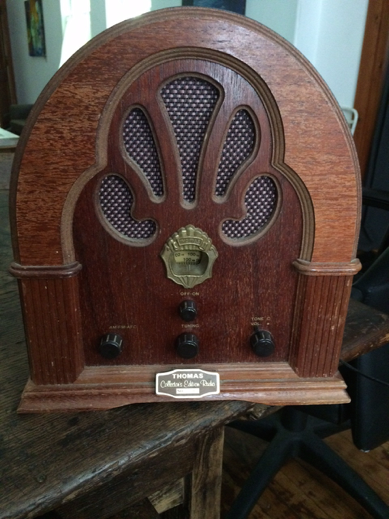 It was left behind by a previous tenant. Remarkable that I was able to find the song in my pocket and play it back all without having to leave the room. The opening ended at 9 and I went and got a pizza for my daughters and went out on my bike to hear some live music at the Harmony Café.

I emailed this to the Roundtable on WAMC.FM:

Subject: hilllary’s best move is to stay in bed

Message: seriously, hillary is having some of her best days. her weakness humanizes her, like when she cried. faced with the existential threat of a trump presidency the collective consciousness of the nation is clearly in her corner. this can be seen in the way they talk about her the last days on CNN for one.

Dr. Alan Chartock read it on the air and commented that I might have something there.

Transferred “Blues For William Tell (Burroughs)” from a jam recording in the ’90s? Probably with my vedantic friend Wayne Waller on lead guitar.

I screengrabbed this off of Daily Kos off of Twitter: 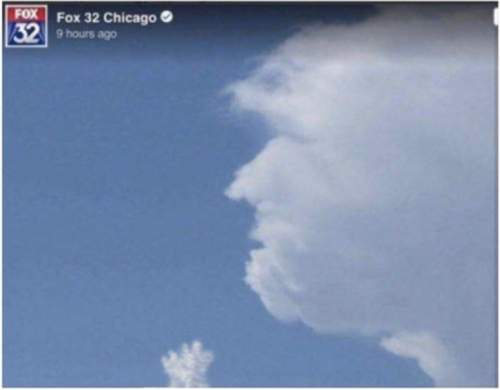 iTunes on shuffle is playing one of my favorite songs by my favorite songwriter BBD (besides Bob Dylan): Michael Hurley. Followed by “Secret Mister” by Barbara Ess, performed by Daily Life.

Listening to WAMC.FM; Commonwealth Club show about connectivity and hacking.

Leave for daughters’ soccer match, listen to radio in the car.

Out to dinner at the home of Diane Teramana who showed us two videos of hers: Dread, about her grandfather’s murder/suicide, shooting his wife and himself at the dinner table in front of their six children, including Di’s father, and Dope, about her son’s addiction and overdose. They will be screened at the Mothership in the future.

Turn on the radio in the kitchen while cooking oatmeal and coffee. 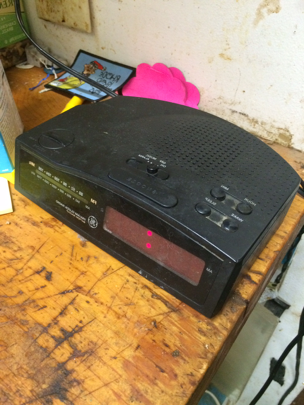 Emailing and text messaging on laptop.

Turn on the radio in my office to listen to the Roundtable as usual.

Printed out an invoice for an order for my cat toy, Ms. Tick Mouse, which I will include in the package I am about to send out.

Very interesting program on WAMC radio about the drug war, interview with (name not posted yet).

Done with email and laptop chores. Going out on errands.

Listen to Life on Earth on WAMC each week while preparing victuals for the day and coffee and oatmeal. At work at 7 as mailman, my one-day-a-week job since September 10, 2001. I listen to NPR Weekend Edition with Scott Simon. During Bush 2 I called it Weakened and Dishin’. After work at 4:30 I have daughter errands and after returning from the mall I hang out at Shiv’s Full Moon celebration in my own backyard. Only a few minutes on Facebook and email. I missed the notice that my friend was playing on Sunday. Later I learned he was prevented from entering the country so better I didn’t go.

Cher Stuns the Audience at the Ann Demeulemeester Show