Sadie Laska is an artist living and working in Brooklyn. This year, she has staged solo exhibitions at Canada in New York and Galerie Bernard Ceysson in Luxembourg. In addition to visual art, Laska has also performed in the groups IUD (with Lizzi Bougatsos of Gang Gang Dance) and Growing.

For her edition of “Consumer Reports,” we spend a week in Paris with Laska, where she impressively logs all of her intake on an iPhone, although it is unclear what model. Laska watches French films in France, listens to quite a few podcasts, and braves a lockdown at the Louvre. All this—plus plenty of reading and the experience of watching a Thai film with French subtitles in France—below. —John Chiaverina

I read a few chapters of Abroad, a novel by Katie Crouch. I’m about halfway through this book. It’s pulpy summer vacation reading: drugs, college sex, ancient Etruscan mystery, cults, and murder. It’s kind of a fictionalized account of the Amanda Knox story, but it takes the perspective of the murder victim, Meredith Kercher. 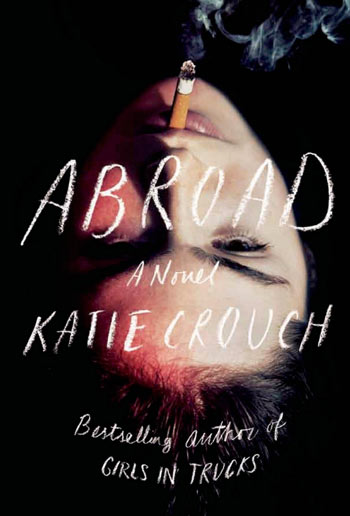 I’m supposed to be working in my studio because I have a crazy deadline, but I started wasting time on this blog, disclosetv. There are stories about alien sightings and government conspiracies… There’s a story about Detroit’s underground salt mines—with over 100 miles of underground abandoned roads. It closed in 1983. There’s some video footage underground, it looks really creepy.

My friend sent me a link to this blog I’ve been wasting time on, it’s pretty funny… Contemporary Conformist. It has a whole thesis about bearded men in chambray shirts, Edison light bulbs, coffee, urban industrial naturalism, and the term artisan. I love it.

Article in the New Yorker about Chris Farley—new documentary called I Am Chris. Physical comedy becomes more and more a form of self-flagellation.

I listened to some music while I worked.

Guitars of the Golden Triangle: Folk and Pop music of Myanmar (Burma) Volume 2

This album is really groovy. I love the Sublime Frequencies releases. The recordings are from the ’70s and early ’80s and feature singers and musicians from the Shan province of Myanmar. I have cases of wine in the basement of this studio… So I just opened up a bottle and figured out how to order Paris Thai food delivery—I can’t call for delivery because I don’t really speak French.

I listened to podcasts while working.

Totally cool episode about the discovery of giant viruses. Examining evolution and sometimes life shrinks as it becomes more evolved. Recent discoveries of mega virus, DNA doesn’t match any life seen before. They straddle the line between living and non-living and sound like alien life forms!

Another Radiolab episode about Oliver Saks and the periodic table.

Went out for a walk in Paris…

My phone doesn’t work… So no media… Unless the Louvre counts as media. It’s August and the museum is a little less crowded… Arriving late in the day, there wasn’t time to see very much. I made plans to meet a friend there and we had a terrible time finding each other. We were supposed to meet in the Poisson Four Seasons room. She texted me that she was stuck outside, because there had been a theft in the museum!!! And all the entrances and exits are locked down! I’m assuming the problem was resolved because I was finally allowed to leave and we met outside.

I read several more chapters of Abroad. But got more interested in the actual murder, so I spent some time reviewing the case and read several articles and the Wiki page about the trial.

Sometimes I prefer listening to audio books rather than music while I work. This afternoon I listened to Stephen King Just After Sunset.

The King book is comprised of short stories with spooky music in between each chapter and different people reading, including Stephen King himself. Today I listened to “Cat From Hell”—obviously about a demonic cat, and “A Very Tight Place,” a disgusting story about a man who gets locked inside a porta potty by a man trying to kill him. He attempts to escape by climbing into the holding tank. It’s super gross.

Finished reading Abroad, a pretty underwhelming ending, but I’m not sure what I expected from it…

No media today! Bike riding and sightseeing in Paris.

Late night watched the first two episodes of Veep. This show is hilarious. I think Julia Louis-Dreyfuss is a genius.

Began reading 1913: The Year Before the Storm by Florian Illies. It covers the year 1913, with each chapter as one month. On the brink of world war, 13 is a superstitious number. Characters include: Stalin, Freud, Marx, Rilke, Freud, Charlie Chaplin. It begins with Louis Armstrong learning to play the trumpet. In January 1913, Joseph Stalin is still named Stavros Papadopoulos and is going to live with Trotsky in central Vienna.

Streaming radio in the studio: All Things Considered, Democracy Now!

Read the New York Times article “Dr. Dre Apologizes to the ‘Women I’ve Hurt.’” This apology seems only driven by fear of financial loss. I don’t think it offers any real retribution.

Episode of Law And Order in which a man was arrested on Long Island for not properly maintaining his lawn. Lawn shaming. The history of the American Lawn.

Episode of 99% Invisible: Hard to Love a Brute.

It’s always hard for me to choose music to listen to while I’m working. I’ll get distracted with all the choices and waste a lot of time changing records and not working. So I like radio and other people’s playlists. Then I can just listen. I really prefer more upbeat music… Soul, disco, reggae.. I can’t listen to sad morose songs…

Since I’m in Paris. I decided to watch a French Film.

Very 1980s, postmodern chic—main character Louise, a Parisian scenester who can’t commit to love and needs the Paris nightlife. There’s some great fashion and awkward dance moves. This movie has a great scene where the main character is riding around Paris under moonlight on the back of a motorcycle. I really wish I was doing that right now. Seems like the best way to see the city.

In Munich, Kirchner, Paul Klee, Oskar Kokoschka, and Wassily Kandinsky organize an auction to help the poet Else Lasker-Schüler.

Virginia Woolf publishes her first novel, The Voyage Out. Barely fifty copies of the book are sold. Camille Claudel is committed to an insane asylum by her brother, the poet Paul Claudel. Kafka sends The Metamorphosis to publishers.

My friends invited us to go see a movie tonight, a Thai film called Cemetery of Splendor, by Apichatpong Weerasethakul. It’s just been released in France and my friend is reviewing for tomorrow’s newspaper. There is only one theater screening it in Paris and it’s pretty far outside of Town. So we traveled out to the suburbs to see it in this tiny arty theater.

This director usually makes films that are more visual with very little dialogue, so we didn’t worry about it not being in English. But we were surprised that the movie was filled with dialogue and I only had the French subtitles to read. I know a little French… But mostly I just watched and tried to figure out the story. It was fun to not understand all the dialogue and just enjoy it visually. It’s a beautiful film about soldiers with a sleeping sickness, and people inhabited by a spirit world. There were some very funny moments. We all talked a lot about the movie afterwards, and I was surprised how much I understood without understanding a word.

The leading source of art coverage since 1902. Subscribe today!

The BMW 2002 Turbo Is a Holy Grail for Bimmer Collectors. Now a ’74 Edition Is Heading to Auction.

At Fendi’s Fall 2021 Men’s Show, Bags Were a Highlight

How to Watch ‘WandaVision’ Online: Stream the Marvel Series Now on Disney+

SPY Guide: How to Clean, Disinfect and Sanitize Every Type of Face Mask