Takeshi Murata is an artist living and working out of Saugerties, New York, who has exhibited work at venues including the Museum of Modern Art, New York; the Museum of Fine Arts, Houston; and the Smithsonian Museum of American Art, Washington, D.C. This May, Ratio 3 in San Francisco will open a solo show of new work, and that same week Murata’s kinetic sculpture Melter 3-D will be included as a recent acquisition in the inaugural show of the renovated SFMOMA. Additionally, a comprehensive monograph—published by Salon 94, Ratio 3, and Kunsthall Stavanger to accompany a recent survey show, with texts by Lauren Cornell, Alex Gartenfeld, and Dan Nadel—will be available everywhere on February 3.

A Saugerties week with Murata finds the artist both reading Shrek to his daughter and going down some interesting Reddit wormholes. Podcasts are consumed literally in his sleep while a wide variety of music—both new and old—is listened in the studio. Also: insane mouth-eye animated GIFs, his daughter’s favorite Monty Python sketch, and ruminations on the most underrated man in show business, Mr. Steven Brody Stevens. —John Chiaverina

First 17 seconds of “Horse Steppin” by Sun Araw. I made the ringtone about 4 years ago, been my wakeup alarm since.

NYTimes, Washington Post, and Robert Beatty via twitter. All bad news today. Robert
posted this song this morning with the comment “The only solution I’ve ever imagined for the problems we share on this planet.”

FaceTime with Francine Spiegel (my wife)—she’s down in NYC finishing a collaborative inflatable sculpture with Judi Rosen. They inflated it for the first time last night, and it works. 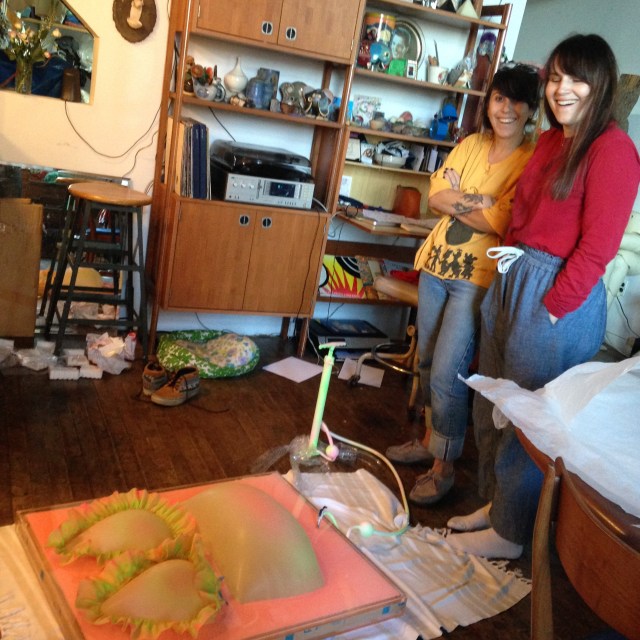 In studio, working listening to this morning’s Stern show.

Reddit vortex, end up listening to “Moonlight Sonata” while looking through progress pictures of a man getting a full face transplant.

Watching 1981 Leonard Hearns film The Showdown on cable. Then the TV show Fargo. Season 2 has been great. It’s basically a long-form Western, set in Fargo in the ’70s. Back in the days when “made for TV miniseries” was a bad thing.

Clip of Gallagher walking off WTF podcast. Not much to say about this. A lot of hate behind those smashed watermelons.

Instagram DM from Jim Drain pointing me to @techappeal. If you’re still reading this, there’s a good chance you already follow @j_i_m_d_r_a_i_n. If not, here’s his great post this morning.

Peter Coffin invited me to take part in a book project featuring letterpress posters for concerts that never happened. He’s asking participants to come up with a headlining band, opening band, venue, date, etc. Been fun to think about, and an excuse to revisit some old albums. Listening to a favorite, Bobby Beausoleil soundtrack for Anger’s Lucifer Rising. Definitely including that. With openers Robert Wyatt and Les Rallizes Dénudés. For the venue, I decided on the The Persian Room at the Pines Hotel in South Fallsburg, New York. It’s one of a number of abandoned resorts around here from the Borscht Belt era. 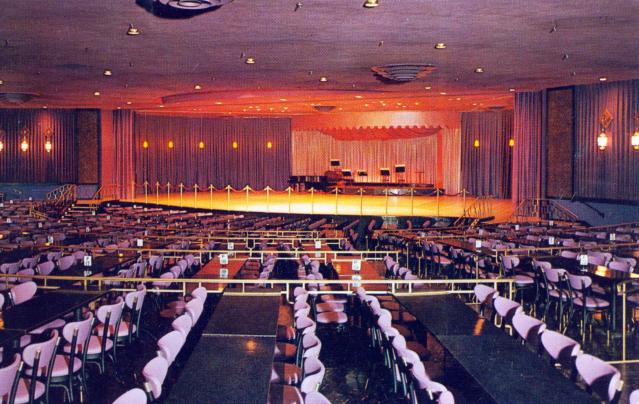 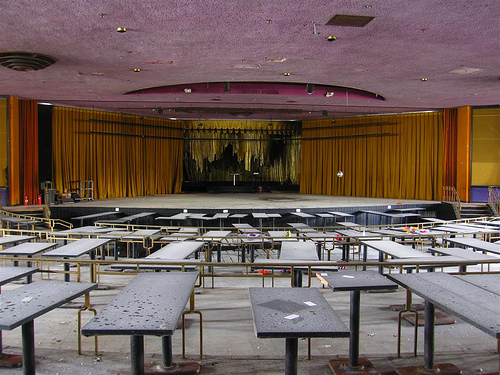 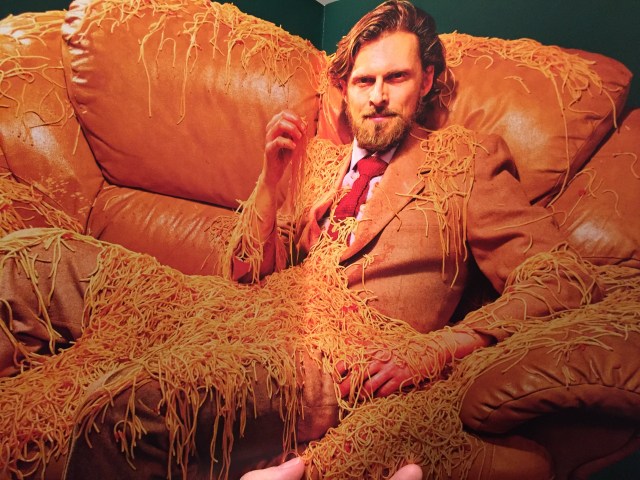 Listening to some things while working. Stooges S/T, Ariel Pink Pom Pom (one of my favorite albums from last year), and Thug Entrancer Data Slave.

Read this after mistakingly thinking Noe directed a Justice video I was thinking about. It’s actually directed by Romain Gavras. Still relevant 7 years later, and probably will be 70 years from now.

Watching last half of Society, which seems to mirror some images from the Toilet Paper I just got.

Amy Lockhart told me about this movie when we met last week at the Eyeworks Experimental Film festival in Chicago. Here’s a clip from the video of hers that they screened.

Fell asleep listening to Last Podcast on the Left—the episode is on the infamous serial killer and hotel designer H.H. Holmes. Wake up four hours later with headphones still in and now midway through Duncan Trussell interviewing guy about isolation tanks. Forgot to turn on “sleep” function. Not sure what else was absorbed while unconscious.

Francine and Frances are back from Brooklyn. Frances (my daughter) asks to watch her favorite video before going to preschool.

Finished reading New Yorker while eating lunch, including Stella retrospective review by Schjeldahl. Funny to read the critics admission to being unable to make sense of Stella’s later work. I can’t either, but I want to try.

Watched the Yuri Norstein animation Hedgehog in the Fog with Frances. I was lucky to see Norstein lecture in New York in the late ’90s. He had brought some of his cut-out puppets and cells with him, and used them to demonstrate a few of his techniques. The most memorable was the creation of the fog in Hedgehog in the Fog. Norstein placed the hedgehog paper puppet on the table, then a piece of thin tracing paper (or maybe it was velum) on top of it, so the hedgehog was still visible. He then slowly lifted and lowered the paper, making the hedgehog appeared to move in and out of the fog. There was an audible gasp in the audience. It was so simple, and a perfect effect.

In studio listening to the Holy Mountain soundtrack LP. I’ve been in a soundtrack mood this week, starting with revisiting Beausoleil a couple days ago for Peter’s project.  I playlisted some of my other favorites for today. Angus MacLise’s Invasion of Thunderbolt Pagoda, Goblin’s Suspiria, and Magnet’s Wicker Man. The movies that stay with me always have strong, if not equal, sound components. I also think of Wendy Carlos’s soundtrack for The Shining, or Tangerine Dream’s for Thief. Recently, Collie Ryan’s song It’s Gonna Rain as primary element in the soundtrack for Andrew Bujalski’s Computer Chess.

This video, aside from making me actually laugh out loud, is about the closest depiction to life in the post-apocalyptic VR that I’ve seen.

South Park, then two of my favorite British comedies that aired last night, Peep Show and Toast of London.

Read Shrek to Frances. The original is beautifully written and illustrated by William Steig. It’s hard to imagine what happened to produce the dull ugly movie that Shrek is now famous for.

After Frances was born, I’ve revisited many of my favorite childhood books. There are the classics with great illustration, like Goodnight Moon and Madeline, and some lesser knowns like John O’Brien’s illustrations in Favorite Tales of Monsters and Trolls. This one I remember spending many hours staring at as young kid. 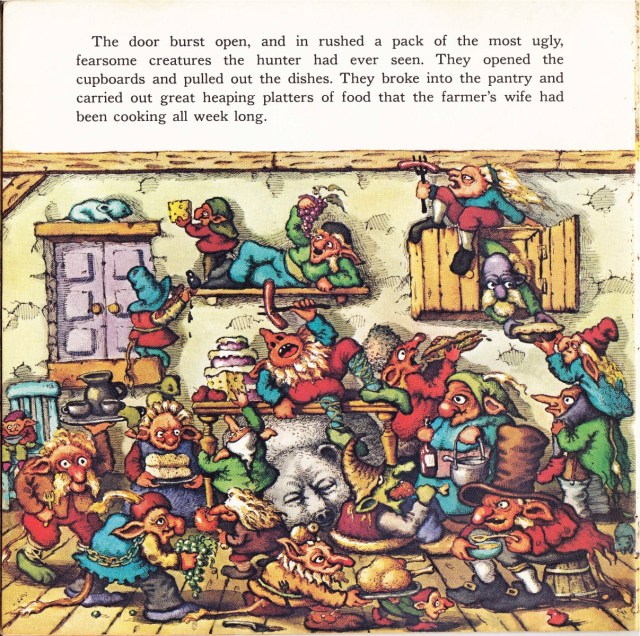 In studio listening to some new releases, Heather Leigh I Abused Animal, James Ferraro Skid Row, and into a couple weeks of listening to Oneohtrix Point Never Garden of Delete. Garden is Dan Lopatin’s second outing on Warp, and as rigorously experimental and ahead of just about everything else I know.

Getting high with Harry (references this).

Smith was a great animator and filmmaker, but his most significant contribution in my opinion was the Anthology of American Folk Music in 1952. 2:45 p.m.

New line of Arcangel Surfware announced. Got my order in and my wardrobe set for 2016.

Periscope—Live watching Brody Stevens, in his car, rant about blowing opportunities, positive energy, and major league baseball. He takes a little time to field questions and comments from the 50 or so of us watching. A friend told me about his short-lived TV show Enjoy It! a couple years ago and I’ve been a fan since. I haven’t gotten to see his live show in person, but I hear it’s epic (John!). He falls in the same group for me as Andy Kaufman and Mitch Hedberg—comedy that’s as revealing and provoking as any great art is. With a laugh.

Going to bed, listening to Eno’s Another Green World. The song “The Big Ship” was used in the final scene of two recent movies I watched. Just too good to pass up I guess. Good night!

Gunman Who Tried to Break Into Cincinnati FBI Office Was at Capitol on Jan. 6