Yannick Val Gesto is a Belgian artist living and working in Antwerp. Since 2013, he has shown at the Belgian gallery Levy Delval and exhibited internationally at venues including Higher Pictures in New York, Gloria Knight Gallery in Auckland, New Zealand, Sunday Art Fair in London, and Ausstellungsraum Klingental in Basel, Switzerland. Val Gesto recently staged a solo exhibition, titled “Booming,” at Cinnnamon in Rotterdam, the Netherlands, and his work will be on display at Bid Project Gallery in Milan during its “ON-SCREEN AND OFF” group show later this month.

Val Gesto spends a week in Antwerp applying for jobs, closing on a new house, and playing video games. On a related note, there is a lot of deep Internet digging for original video-game soundtracks, the fruit of some of that labor shared below. These games have really great music! All of that and a lot more, including some sneak peaks at new work, below. —John Chiaverina

Fuck, I just realized I had to do this report and it’s already late. Well, I just came home from signing the ‘agreement’ papers for the house me and my gf are buying in a couple of months. It’s quite scary, but fun, a strange mix of feelings.

(You must listen to this incredible music while reading further.)

Today was a weird day, earlier this morning I couldn’t help but notice how the sun was as bright as ever, yet it was freezing outside. I had a great soup of handmade noodles in the Chinatown district of Antwerp this afternoon, I sat in front of their kitchen so I could see the kid working hard. I thought to myself how wonderful it must be, to be so young yet so focused on one thing and being really, really good at it. In his case it was making noodles by hand.

Soooo my girlfriend notified me that today is special because its the 29th of February. I’m not sure how to feel about a day that only takes place every few years. I think I don’t care all that much :/ I do care about Gundam Breaker 3 (PS4) though, WHICH I PRE-ORDERED YESTERDAY BECAUSE IT IS GETTING ENGLISH SUBS IN ASIA SO IT’S IMPORT FRIENDLY!

I haven’t even tried meditating for the past few days, I’m currently failing my meditation routine…

I felt like producing some new work today. Here’s a detail of a digital painting I’m working on. I always feel like the details/crops I make from existing work are stronger than the actual results 😐 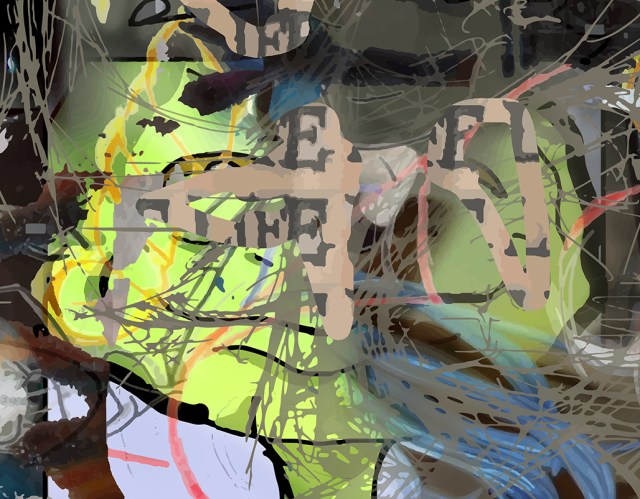 Looking at this crop/detail I realized I should continue working on this bit rather than the whole work. After overworking the piece above, I quickly made something very goofy and different, so this one popped out. I’m very happy with it, it is very pure. 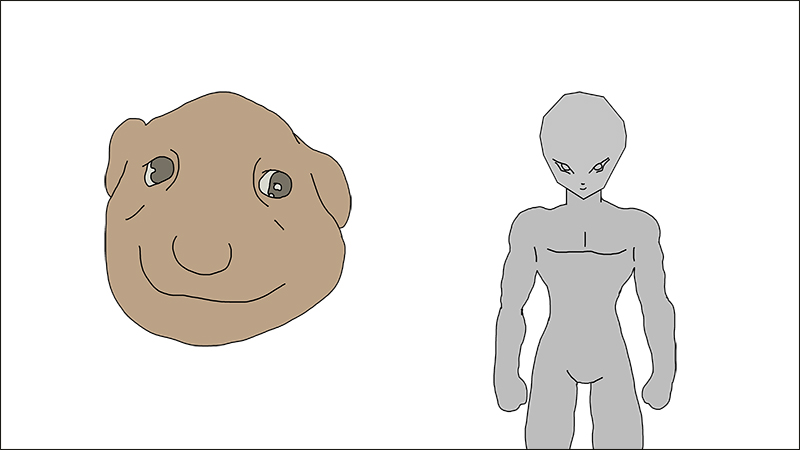 I spent the afternoon listening to the OST of Birdman and Trap-A-Velli 3 by 2 Chainz. There’s this opera-like track on the OST from Birdman that really struck me; it’s titled “ich bin der welt abhanden gekommen.”

Time to relax. Computer off.

I have this tendency to look for hidden gems online, it fuels my art practice. I try to find these ‘rare’ pieces of visual integrity that can range from fanart to photographs to personalized memes, etc. What is mainly important to me—throughout this search for visual material—is that there’s a notion of emotion or expression, a longing for happiness in digitalization, how naive or ugly it might be.

Which brings me to my passion for specific video game soundtracks.

I absolutely love the Shin Megami Tensei games (Japanese role-playing games where you fight demons with demons) for their art direction and music. Most of these games have a soundtrack composed by Shoji Meguro. It’s really interesting to hear each game’s different themes and in-game zones being directly translated into music. The tracks also have this very emotional-yet-digitalized feel to them.

Here’s one of my favorite picks, from SMT: Persona 3. It’s the sound you hear when you are going through this dark tower’s (Tartarus) different floors at night, fighting demons with your party of friends. Someone has edited all the different level variations into one extended song. 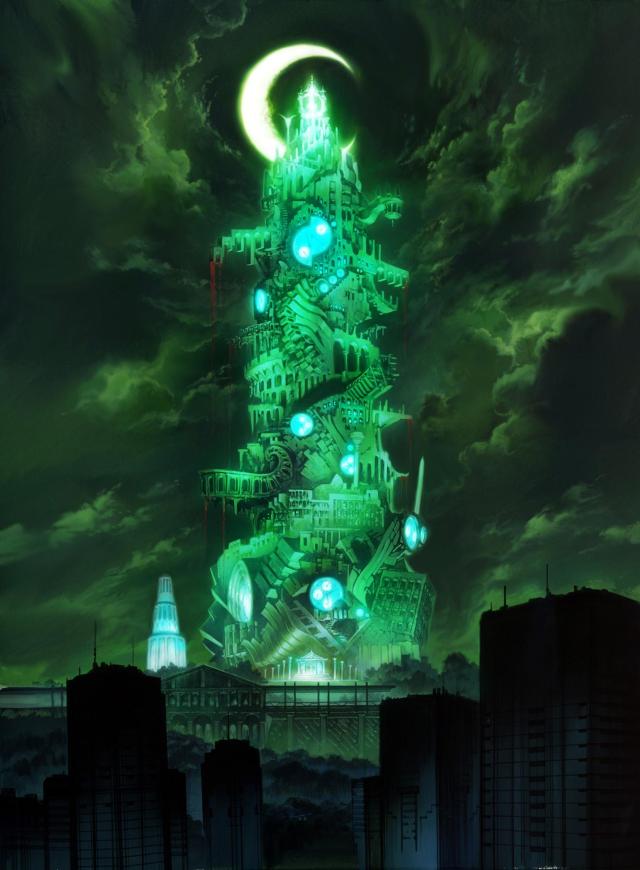 Just had a long talk about my work with Pieter from Cinnnamon, a young gallery in Rotterdam I recently collaborated with. Our conversation made me feel quite good about myself and confident. It also made me realize that I don’t talk enough about my work with the right people.

Recapping my recent work and upcoming plans with Florent from Levy Delval. He recently became a dad. Meanwhile he’s boasting about how he unlocked the last character in The Binding of Isaac. Perfect.

Still trying to figure out whether or not I need Plants vs Zombies: Garden Warfare 2 in my life.

My sister just shared a video of her newborn on Whatsapp, it’s too cute, I’m speechless.

Going out to buy Garden Warfare 2 for PS4.

I spent a few hours looking at old pictures of myself and friends on an external hard drive. It made me realize I haven’t changed all that much. I guess I’ve become calmer and I’m eating healthier but I’m still a goof.

A friend of mine sent me this “none pizza with left beef” image. I didn’t know it had meme status, can’t stop laughing.

Just had breakfast and currently listening to the upcoming Roman Hiele album. I remember how I used to visit his—vintage synth–stuffed—studio in Antwerp and how he shared me tons of obscure electronic music I’d never heard before, from the likes of Drexciya and the more local Hantrax. It seems to me that he’s really mastered being the culmination of all these different auditive inputs he values so much, his music sounds as tightly layered as ever.

A friend just sent me this in an email. Followed by “uh oh.”

“The five marks of the Roman decaying culture:
Concern with displaying affluence instead of building wealth;
Obsession with sex and perversions of sex;
Art becomes freakish and sensationalistic instead of creative and original;
Widening disparity between very rich and very poor;
Increased demand to live off the state.”
—Gibbon

Going out to have pizza with my girlfriend. We normally don’t eat pizza. We got a table next to two extremely loud guys talking about their job in IT. It’s incredibly hard not to eavesdrop their boring work–related conversations. Me and my girlfriend are trying to distract ourselves from this situation by sharing Temptation Island–related memes through Whatsapp.

I forgot about tonight’s live Nintendo Direct! I just tuned in!

Tokyo Mirage Sessions #FE is the new name of the Fire Emblem, Shin Megami Tensei crossover game for Wii U. God I love the art direction so much, the pre-rendered cinematics are gorgeous. I’m very excited to play this!

Listening to the voice messages Leon Sadler left me earlier today. It’s interesting how we’ve been really close cyberbuddies for the past few years and how we are currently experiencing really similar life-changing experiences (looking for a job, looking for a house to buy, etc.).

Last week me and him started watching a new anime called Mr. Osomatsu together on Crunchyroll while using the Hangout app on our mobile devices to communicate, in real time. It might sound silly but it was actually super memorable and fun. This Mr. Osomatsu anime show is most definitely worth checking out, top-tier slice of life/comedy stuff. Funny how the episode we watched was also dealing with orientation in life and work.

I’d love to watch some right now but I’m too tired, time to sleep.

I woke up. Buying some fruit and soy milk. Morning walk.

Been running around town fixing paperwork and applying for jobs all week, feel like doing nothing useful today.

Gonna have lunch and watch some Stephen Colbert while doing so.

Time to get happy!

Here’s something I made today, which I’m proud of, / feel like sharing 😀

The title is: A Boy and His Friend. 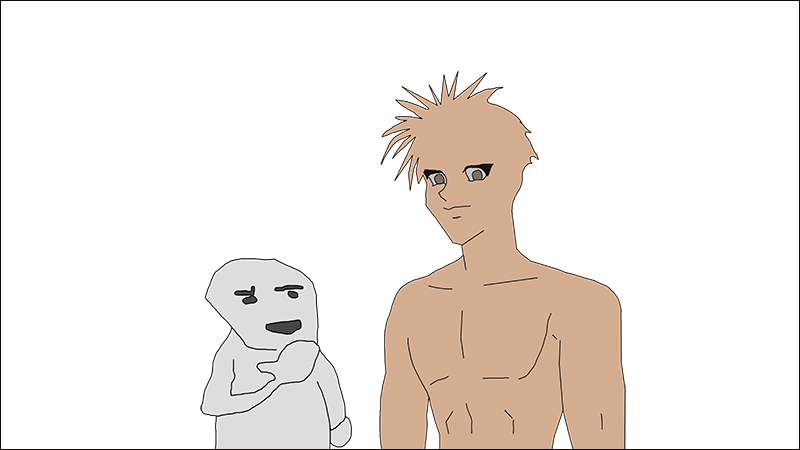 So I’m currently working on a new series of works, which takes the form of a collection of very simplified characters (as seen above), placed in various simple empty compositions. They’re a bit reminiscent of the self-portrait I made last year or the various “petrified” works I did which are basically gently (b&w) vectorized screenshots that I took from anime character close-ups. There’s something very soothing about tight linework/high contrast. I guess this new series is the culmination of both.

Anyway, I mainly wanted to point out that I’ve realized these new works are a way for me to play around with the appeal and idea of concept art. And also an exercise in seeing how far I can take this idea of translating existing character designs into something fresh and new, losing the original while maintaining a notion of identity.

My girlfriend is exhibiting some new jewels of hers at the Stadsfeestzaal tonight so imma have a look. There’s quite a lot of local artists and academics participating, the idea is to intrude this commercialized place with art throughout the weekend.

The opening was quite weird.

We just watched some Amy Schumer. I kind of like her stuff but can’t help but feel that each of her skits always end awkwardly… I just wish I could experience It’s Always Sunny in Philadelphia for the first time all over again.

I need a plugin that disables browsing with tabs. Pizza is heavily overrated.

I’m listening to TCF’s relaxing “7A04DEEC2CB64E80D22874C8D247D3DDBE6524A3,” which is a bonus track from his latest release on the EKSTER label. I’m asking Victor if I can get a link to this track from him. I know I promised myself to only share game-related music but I wanna make an exception for this track. It would also be really nice to sign off with this one.

I want chestnut pancakes with jam and 70% pure chocolate.

Victor just told me i can upload the TCF track and share it with you guys so here it is! Signing off! Enjoy!

Valentino Drops Two Sneakers Made of Recycled and Plant-Based Materials