Ignacio Mattos has become a star of the New York food scene as the visionary behind Estela and Café Altro Paradiso (both in SoHo), as well as Flora Bar, the fine dining destination on the lower level of the Met Breuer. Prior to opening those establishments, he cooked at Il Buco and Isa, and his experience out of town includes work with Alice Waters’s Chez Panisse in Berkeley, California. He is also the author of Estela, a cookbook with recipes for some of his finest creations. For “Muses,” Mattos told ARTnews about artists and works he likes. —Andy Battaglia

James Ensor
James Ensor’s art resonates with me—how it feels, how truthful it is, the empathy within his work, the color palette. The way that his compositions come together is stunning. It’s beautifully balanced. I think I was 14—that’s the memory I have of seeing the work and being like, “Wow!” It was in a book or encyclopedia, back home in Uruguay. I had it in mind that I wanted to go to art school, but it didn’t work out. I don’t regret it, but I think I would have been decent at it.

Romuald Hazoumè
It’s beautiful what he’s able to do with so little. His last show at Gagosian was gorgeous. It’s pretty amazing how resourceful he is—his work is almost like a cemetery for trash. It’s full circle. I’m obsessed with how beautiful the work is—how simple the elements are and how they’re so smartly put together. I approach cooking in a similar way, with very unexpected and common things put together in a fun and unusual way. When I see someone else doing it and doing it so beautifully, I find a connection.

I try to go to galleries as much as I can. I really enjoy it. I know what I like, and I try to stay curious. Being at Flora at the museum is also fun. It’s cool that we have the museum above with all the shows going on there.

Richard Serra
I love how overwhelming some of the work is, and how simple. I also love his approach and his whole philosophy. The scale of it and the simplicity are really disarming in a beautiful way. The movement, the flow. I have a hard time thinking of one particular. It’s hard to pick. One of the early works that looks like a cape is really stunning. His sculptures, for the most part, I love them all.

ARTnews: Has he eaten at your restaurants?

Not that I’m aware of. Maybe he’s been but incognito. We definitely get artists coming to the restaurants. At the museum we get a bunch.

Louise Bourgeois
I love her intensity and rage. There’s a documentary on her where she’s playing with a tangerine [Louise Bourgeois: The Spider, the Mistress, and the Tangerine, from 2013]—I think that’s one of the most beautiful things ever. I like her drawings quite a bit—raw and pure in a way. 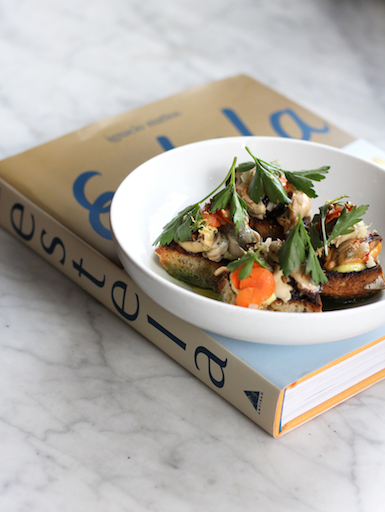 Francesca Woodman
It’s fascinating that she was so young and so open and raw with her feelings. Her work is emotionally complex, and it’s so advanced and mature for someone so young. I’ve come across a couple books and saw some of her work and I really enjoy it.

ARTnews: How did you approach photographing your food for your book?

It’s really hard to put in a book how it would feel to dine and how the food would feel. It’s hard to pass along those very primal experiences. I wanted to keep the integrity of the food and how it looks. I was a little concerned that it would come across as too bold and intimidating. I wanted it to be a cookbook, something that was accessible; I didn’t want it to be a coffee-table book. I think we came out with something cool.

Grayson Perry
I’ve been completely in love with his pottery work but also the tapestry work. He’s an interesting character, but I think the work is really stunning. I also love the documentary that he did about taste [the 2012 TV series All in the Best Possible Taste with Grayson Perry]. He did a study of working class, middle class, and the aristocratic class in England, and it’s very interesting to see. For me, taste is completely fascinating—what makes someone have a certain sensibility. I didn’t grow up with access to much art, but I could sense what is good. I also associate myself with the punk-rock influence in his work. Ceramics are interesting—you put so much work into a thing and then you put it into a kiln and you don’t know what’s going to happen.

With a New Constitution, an Old Question: What Next for the NCAA?

We Asked an Expert How To Lose Weight Without Exercising