Nakhane is an adventurous, expansive musician from South Africa whose recent U.S. debut, You Will Not Die, careens through skewed art pop and aspects of gospel-tinged soul via a striking voice that rises and falls as if gravity were a mere distraction. Some biographical information, via a press release: “At age 19, he came out as gay to his fundamentalist Christian church and Xhosa family, only to spend the next six years surrendering to the false belief he could pray away his ‘sinful’ sexuality.” After that, he abandoned religion to be himself and make that self apparent in songs that play like mini epics for all the emotion they impart. (One is inspired by Jean Cocteau; another is a collaboration with ANOHNI on vocals.) For “Muses,” Nakhane wrote about artworks that made an impression on him. —Andy Battaglia

Lucian Freud, Two Men in the Studio
Lucian Freud’s own face is a work of art. It’s so angular and expressive. In photographs he always seems stunned, as if he hadn’t been quite ready for his picture to be taken. That expressiveness is transferred to his work, which is all flesh. As much as I love his self-portraits—particularly Reflection with Two Children (1965)—it’s his paintings of other subjects that really move me. Since I lack the jargon to explain why Two Men in the Studio (1987–89) works, I will work with my feelings. (That is all I really know, when it comes to it.) The painting is not erotic. The standing subject is not trying to entice you. Yet the paint is laid so thick that I can’t help but want to touch it: those thick thighs, those broad feet, the hair travelling from the base of his torso to his chest, the pink of his nipples. All that says more about the viewer than the painter or the subject, but then there’s more information. Who is the other man looking asleep under the covers? What is his relation to the nude? What is that heap on the right? Is it the same heap on the painting in the background? 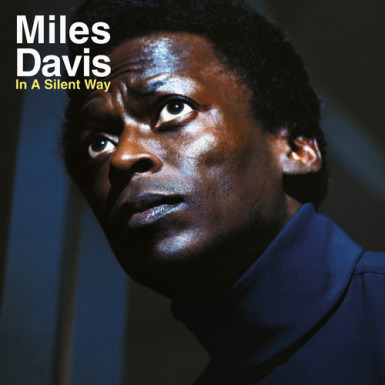 Miles Davis, In a Silent Way
Until I found out about In A Silent Way, jazz was my dad’s music. I liked it, but it was more for my dad and his friends—which meant it was synonymous with bloated bellies, whiskey breath, barbecues (we call them ‘braais’ in South Africa), and middle age. But there I was, in my early 20s and working in a music shop when I borrowed this album with Miles Davis on the cover in a blue turtleneck, his face looking like a basalt sculpture.

The music: It didn’t swing. That was my first surprise. It was ambient and it floated for a long time. This was far from bebop. The first time I heard it I looked at when it was released: 1969. Ha! When Miles performs his solo his horn sounds like a pin prick. It’s acupuncture. You have to lie very still while it works on you. And then the second track, when it does finally groove and the band momentarily opens up, it’s such astonishing and brilliant sunlight. It’s such joy. Jazz was no longer an older generation’s music. It was mine. It was dangerous. It was avant-garde. It was strange. It moved erratically yet meticulously.

Barkley L. Hendricks, Brilliantly Endowed (Self-Portrait)
In stark contrast to the Lucian Freud painting, there is something confrontational about Barkley L. Hendricks’s Brilliantly Endowed (Self-Portrait), 1977. It’s an interesting nude because of how adorned he is. He’s wearing socks and shoes, jewelry on both arms, and a hat. It’s posed, and his left hand leads your eyes to his penis. And then there’s the title: if it is referring to the penis, it is not talking about its size so much as its aesthetic appeal. It’s beautiful. Look at it, he seems to say. Black men are not featured much in nudes. They have been featured heavily in pornography as caricatures, mimicking what colonialists said: that their sexual appetite is unbridled. In Brilliantly Endowed, Hendricks is alone. He is not fucking anyone. He’s not looking for you to tell him if he has performed well. He knows he is beautiful, soft, gentle—and a little cocky too.

Wolfgang Tillmans, nackt, 2, 2014
So many of Wolfgang Tillmans’s photographs look easy, but as an artist I know that anything seemingly easy probably took an incredible amount of work to make it look that way. For me he creates his best work when he works on details. This photograph, a detail of a man’s buttock, perineum, and testicles, I really love. One could argue that it is his The Origin of the World. Yet his is the opposite of Gustave Courbet’s painting in almost every way. Courbet fixates on female genitalia, Tillmans on male. Courbet’s view is from the front, Tillmans’s from the back. What they do have in common is that both contain orifices that can be penetrated.

The first time I saw this work was at Tate Modern and the print was massive and unframed. As a queer man, here was a part of the body I had seen many times when I was having sex. This was a part of man’s body that I thought was incredibly beautiful. And yet I had never seen it elevated and put up on the walls of a gallery. Tillmans does not skirt the subject. He does not obfuscate. He moves in close. You can feel the dampness. It’s radical.

Sergei Rachmaninoff, All-Night Vigil
I grew up with big choirs. By “big” I’m talking choirs with 60 voices. Most of the time, these choirs sang without accompaniment, and that’s what moves me about this piece of music. It’s sacred but also has melodies that drip with such melancholy and longing. Even if you do not understand the language of the text, you will be moved by the power of the human voice. When solos appear, they don’t do cartwheels—they’re there to lead the rest of the voices. They float just above, knowing they will fall right back in. And when they do, it gives hope. This is what we can do if we work together. We can create beauty—with our bodies.

From Water Filters to Fire Starters, These Are the Best Emergency Supplies to Have at the Ready

House Haunters: We Asked a Viral Halloween Decor Expert How to Make Any Home Spooky