In 2014, the artists Victor Vaughn and Edward Shenk were commissioned by the digital-arts organization Rhizome to make new work for the online magazine Dazed. What resulted was a series of images that featured appropriated and reconfigured imagery from the iconic American cartoon series King of the Hill dubbed “King’s Hill.”

The series functions in a way not unlike the often-degenerated world of internet fan fiction, but with a deft touch that adds additional layers of abstraction and subversion to already loaded visuals. In each image there is such a high level of narrative intrigue that you might be inspired to write some fan fiction of your own. Never forget: 50 Shades of Grey arose out of the Twilight fan fiction community. Dream big!

The second incarnation of “King’s Hill” is up through Sunday at Allen & Eldridge, a new project space located within James Fuentes’s 55 Delancey Street location on Manhattan’s Lower East Side. ARTnews conducted an email interview with Vaughn and Shenk about the show, their relationship with fan fiction, and more. That, and images from the project, follow below.

VV: It’s like public territory, it’s been ground up online for years

ES: It is one of the least “cartoony” cartoons. It could just as easily been a live action show. There’s this gravity and quiet darkness to it that other shows of its kind don’t have.

What was the genesis of this project?

ES: I don’t know. We began working on these about two years ago, sending them back and forth through email, adding and editing. Slowly they grew. 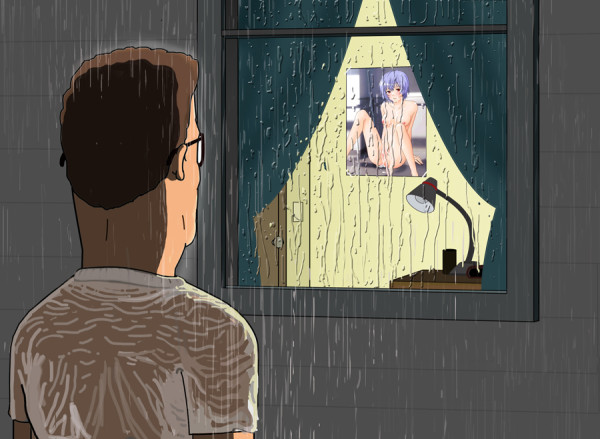 What is your relationship with fan and slash fiction communities?

VV: I’ve done some lurking, posted images here and there, always from under a cloak of anonymity, image boards, never part of any specific fan fiction community.

I like seeing how a particular character can host infinite variations by countless different authors. The character is a familiar guide through all their different ideas of what a body is, or what a person does. Sometimes it’s immature, ugly, and regressive, but there it is.

ES: The majority of what I look at online that falls under a contemporary art umbrella is fan art. With a few exceptions, it’s the only stuff that moves me much. I don’t read much fanfic. As a kid I wrote some. Most of it was for the Animorphs series, something friend and I did at the time called Fanimorphs. 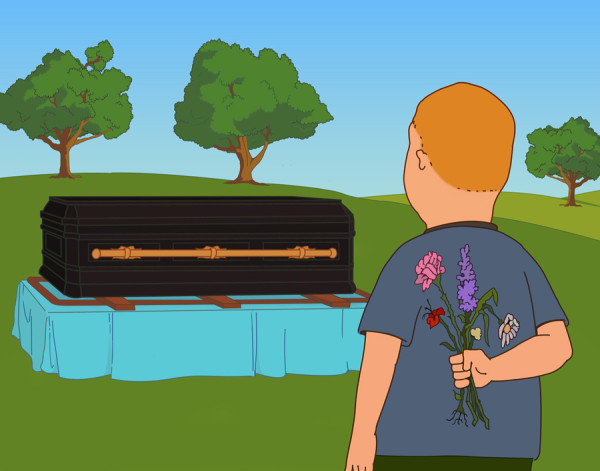 Do you feel like the work you are doing is in conversation with fan fiction communities?

VV: I believe the method we use to make the work is similar. Isolation + encouragement = Wellness.

There is a lot of narrative implied in each image—you seem to be playing with both the the visual aesthetics and the story conventions of the show. What is your process when working on each image?

VV: The basis for each image is always either a single frame of animation from the show reworked, or a single photo that gets hammered into a cartoon shape. There could be 15 random photos that make up the S shape of a table. I like to think this was the method used to produce the show, that beneath the painted production cell is a vast archive of Texas kitchenettes and grandma reaction shots, adding subtle anthropomorphic content=you get unexplained tears looking at a cabinet.

ES: Yeah, it’s not about running with or adding to the King of the Hill world plot. From piece to piece the works hint at their own vague arc. Things like loss and obsession. With Bobby, there is the theme of needing distance in order to feel comfort, him needing the mediator of a screen in order to show intimacy with someone.

Victor said something about the works testing the limits of these characters as vessels of empathy. I like that very much. 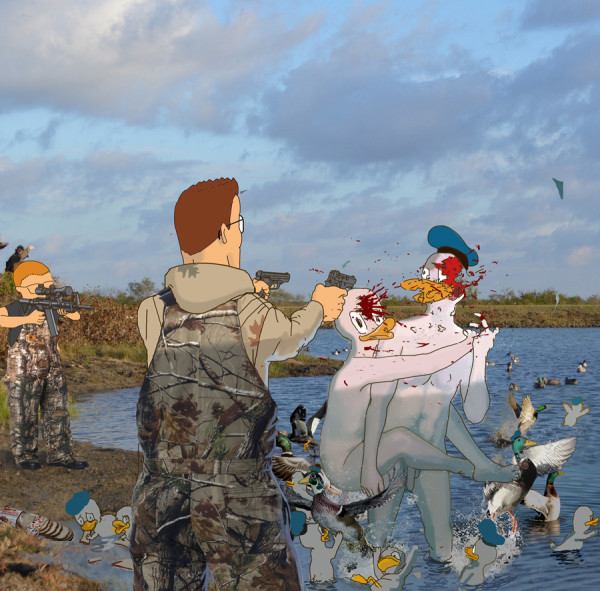 Some of the work refers to the infamous “outsider art” episode of King of the Hill. Do you have a favorite episode?

ES: I like the episode when Kahn goes off his bipolar meds.

VV: I like the episode where Hank has to go to the sink and take a shower.

The leading source of art coverage since 1902. Subscribe today!

Most Memorable Moments From Fashion Awards