Five hundred years after the conquest of Mexico, Sandy Rodriguez is weaving together old and new stories of the United States borderlands. “There is a kind of communion, a uniting, with the tlacuilos, who were the painters, scholars, scribes of the colonial period… it’s about affirming an indigenous artistic practice and reclaiming an art history that is very much of this region and of our culture,” Rodriguez said of making her series, “Codex Rodriguez-Mondragón.” This ongoing multimedia project includes the “Mapa de los Child Detention Centers, Family Separations and Other Atrocities,” pictured above.

Rodriguez’s maps and portraits layer images of separated migrant families with Mayan and Nahua iconography and ancient botanical recipes. As part of her artistic process, she camps along the border, studying and gathering traditional materials to make pigments for her paintings. She is institutionally trained and comes from a family of Mexican artists.

How I Made This: Pierre Yovanovitch's Mama Bear Chair

Rodriguez is inspired by historic documents like the Florentine Codex, which was made by a Franciscan missionary and Indigenous scribes during the colonization of Mexico. This illustrated manuscript described the Aztec religion, calendar, social life, and use of plants, as well as the Spanish conquest itself. The book The Colors of the New World: Artists, Materials and the Creation of the Florentine Codex by Diana Magaloni Kerpel helped her further explore Indigenous artistry and color symbolism. Her map contains figures and colors from the Florentine Codex, the locations of child detention centers, and memories of her field research, among other imagery.

In late 2018, Rodriguez traveled the Western U.S., “when we started hearing about [the] family separation policy and proliferation of child detention centers,” she says. “It was a moment to reflect on the most urgent stories of the day and then look historically at cycles of violence against our communities, and layer that with colonial texts, along with my field study.”

Rodriguez takes traditional amate paper into the field. Amate is handmade from mulberry bark and various species of ficus; it was prohibited during the colonial period. The Spanish would burn artworks on amate, because they were symbols of Indigenous culture. Rodriguez sources this paper from a family in Puebla Mexico that has made it for five generations. The child detention map is on a large sheet of amate (about 8 feet by 4 feet). Rodriguez collects plants, minerals, insects, lichen and other materials to alchemize for her palette.

2. Color Processing in the Studio

The colors Rodriguez uses are hand-processed on a stone slab with a palette knife and muller. She said they are mixed with gum arabic, honey, and, “sometimes, a drop of wild thyme oil to prevent bacteria in plant-based colors.”

As she creates colorants from a certain region, Rodriguez makes a color chart. She notes “the pH level of the water, the duration of the time for extracting, [and] ratios of binder.”

Rodriguez made some of the yellows in this map with the mushroom Phaeolus schweinitzii. “You have to break off the outer edge, and it’s wet and it’s spongy… you put it in a dehydrator for about 12 to 15 hours so that it gets a cracker-like crispness.” At this point, it can be stored in a jar until color extraction — “I basically put it in some hot water and then do a simmer.” Find this yellow outlining California, the Golden State, where she sourced the mushrooms. 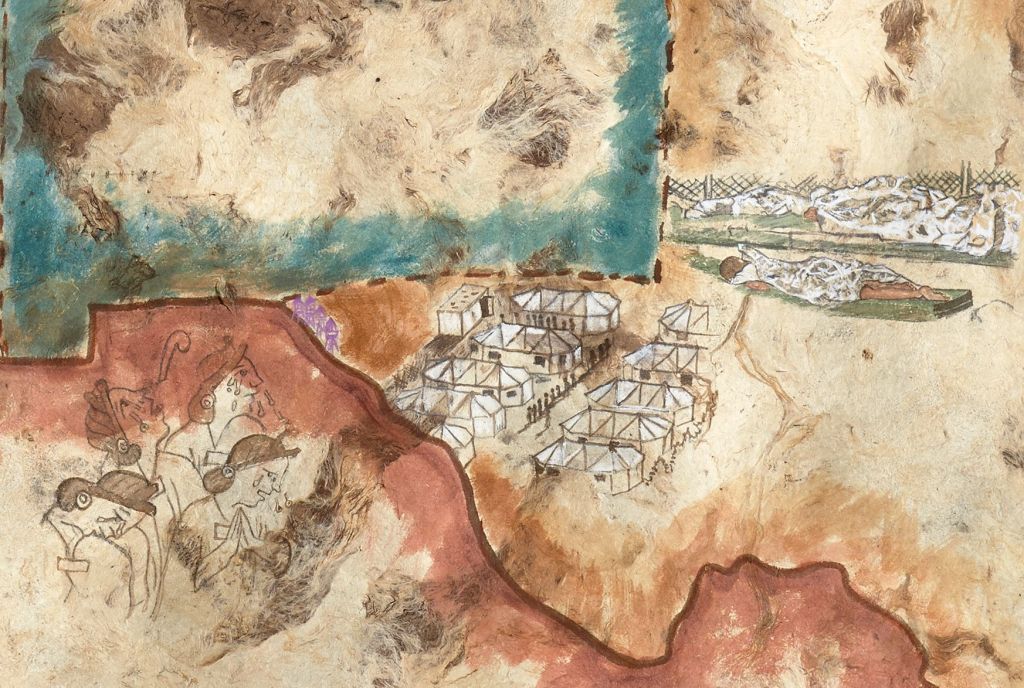 Rodriguez also uses ochres, or clay-based pigments. Cochinilla is one of the reds in the map — a pre-Columbian hue produced by an insect that eats cacti. She said, in the Indigenous works she studied, translucent reds like cochinilla signify the terrestrial realm, while a more opaque iron oxide-based red references death and the underworld. The reddish border between Mexico and Texas, between the weeping mothers and detention camps, is made of the iron oxide hematite.

Rodriguez produces various iterations of the historic pigments Maya Green and Maya Blue with Mexican yellow ochre. Find this green under the children’s bodies, who are shown sleeping on the floor with emergency blankets.

The blue seen in the sky of the landscape in Southern Nevada is made of the mineral azurite. “[The] particle size is such that when the light hits it, it almost shimmers. It’s rough to the touch.”

And Rodriguez experiments with the bark of the logwood tree, “a beautiful reddish brown bark” that can also produce shades of pink, purple and gray. After heat extraction, if you add iron to this material, it will turn black. Add alum for purple, vinegar for honey-brown, or an ice cube for pink.

Reviews: The Best Budget Smartphones of 2022 Prove That You Don’t Need a Flagship