Sarah Oppenheimer, an American artist based in New York City, is drawn to the way the human body interacts with objects to change the way space is perceived: “Think about a doorknob,” she said during a recent Zoom call. “When a doorknob begins to turn, you understand that the door will open, someone will enter the room, and the space you are already inhabiting will be completely reconfigured.”

A senior critic at the Yale School of Art, Oppenheimer has held recent solo exhibitions at the Kuntsmuseum Thun in Switzerland (2020) and at MASS MoCA (2019) in Massachusetts, where visitors (rather than “viewers,” a term too passive to describe those interacting with Oppenheimer’s work) engage with large-scale installations where touching and moving her artwork inverts an understanding of spatial relationships. Oppenheimer has long been interested in how we acquire knowledge about the spaces we inhabit, and how that knowledge affects the way we inhabit them. Visually, this has been explored by artists like Escher or Piranesi, but in more recent times, Oppenheimer has been at the forefront of examining such concepts through forms of perception that go beyond the visual.

Essentials: What Tapes to Use for Art and Conservation

Opening on August 28 at Hamilton College’s Wellin Museum of Art in Clinton, New York, Sarah Oppenheimer: Sensitive Machine was commissioned specifically for the Dietrich Exhibition Gallery. Visitors are invited to touch and move four large but lightweight beams of black aluminum, which are connected to the museum’s existing lighting tracks and walls. By moving these beams, or “input elements,” the museum space is constantly reconfigured: sightlines shift; lights rise and dim; and the lighting tracks themselves move between the walls, or the white volumes. According to Oppenheimer, the longer a visitor spends with the input elements, the more dynamic their engagement with the space: “I’m very interested in the possibility of learning as you encounter an artwork. With Sensitive Machine, a visitor will see how what they touch affects what they are not touching as well.”

Until very recently indeed, the possibility of opening a large indoor installation that visitors are encouraged to touch and experience in groups may have seemed impossible. But it is precisely this social and tactile element of art that is celebrated in Sensitive Machine. As Oppenheimer herself explained, while her artwork was initially digitally generated, it is not digitally mediated in its final experience: You have to be there.

Below, Sarah Oppenheimer explained her process to ARTnews, from conception to future installation.

“My interest in kinetic movement and the idea of a perpetual motion machine led me to explore everyday simple machines — things like locks, castors, doorknobs. On a site visit to the Wellin in 2017, I came across a type of worm screw, which is a component of a Vandercook letterpress. Basically, the worm screw allows nested ink rollers to oscillate back and forth as they turn. I was immediately fascinated. I began to research it online and found a manufacturer. The conception of Sensitive Machine was a very iterative process that began with this worm screw.” 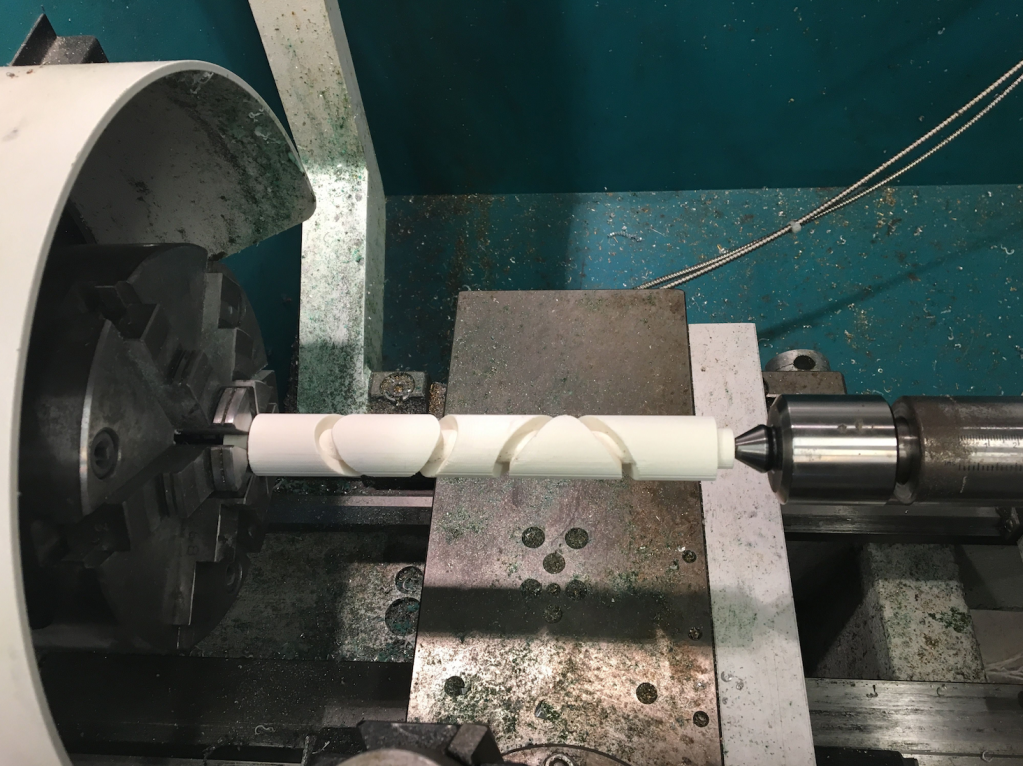 “One consequence of the global pandemic was that anything I was working on this past year had to be immediately at hand, or created via a screen. This led me to a process of prototyping that became increasingly baroque. I collaborated with the Yale School of Engineering to make 3D models of the worm screw in Solidworks, which allows for friction and acceleration analyses as well.

“From there, we used a 3D printer to make small toy-like prototypes, and then a custom fabricator helped us make increasingly bigger models. As the size grew, we had to go back and forth with design and modelling, testing each step along the way before settling on the dimensions for the final artwork, which includes an interior mechanism, white volumes, input elements and linear lighting.”

“The interior mechanism snaps together like a kit or modular machine. It consists of a combination of off-the-shelf components and custom connection details machined by AP Precision. Once fabricated, these parts were assembled in the studio for prototyping and revision. These parts will be buried within the white volumes, and the floor and ceiling of the exhibit space, and won’t be visible in the final artwork.”

“The wall-like white volumes will be made from aluminum honeycomb panels, which keeps them as light as possible. The panels are designed in studio and made by a fabricator who will ship them directly to the Wellin for installation. They will be painted and finished to be identical in their materiality to the surrounding museum walls.”

“The pivoting ‘input elements’ (which each have a different length and center of rotation) are powder-coated matte-black aluminum tubes that are designed in studio then fabricated in a metal shop upstate. In order to balance the input across the pivot point, adjustable steel counterweights are mounted along a concealed edge using a Halfen rail.  The input consists of an assembly of brake-bent ¼-inch aluminum plates joined by concealed PEM fasteners. The input is entirely visible, and is the part of the work that is ‘activated’ when touched by the visitor.”

“Moving linear lights comprise the third visible component of the work. Each pivoting input will activate two lighting tracks. Each lighting track is 36 feet long, and will support seven 48-inch-long linear fixtures that are fastened to the ceiling with aircraft cable at two pick points. The tracks will rise and fall as the white volumes slide back and forth.”

The Best Water Bottles for Our Fellow Hydration Nuts