Lavendra, a celestial brown dwarf star stabilized for human interaction by the power of a diva’s voice, serves as a sort of home for an exhibition by the Philadelphia-based artist E. Jane in New York. Opening Saturday at American Medium in Bed-Stuy, Brooklyn, Lavendra—the show title and the fantastical dwarf star itself—draws on the conceptualism of science-fiction and 1990s-era R&B divas in an attempt to create a welcoming space. “It’s a whole experience on its own that you kind of have to see,” Jane said.

The exhibition’s roots trace back to the artist’s time at graduate school at the University of Pennsylvania. “I didn’t really want to work inside of the white cube gallery but had no choice,” Jane said. “Being in grad school itself is the white cube gallery-type situation.” As a means of circumnavigating her reality, Jane conceptualized the mythos of Lavendra. The framework allowed for thought and research pertaining to “the futurity of black women and the culture that black women produce in America,” the artist said.

Among her many concerns, Jane considered the cultural framing of musical divas in the ’90s—such as Aaliyah, Brandy, and Toni Braxton—whom she said ran in direct contrast to “the ‘welfare queen’ stereotype that was popular during that time—how they were this really beautiful contradiction to all the violent propaganda against black women.” She was also thinking about the era’s music videos as partially forgotten artifacts, ripe for excavation. “What if we could re-salvage,” Jane wondered, “these things that were once so popular but are now kind of remnants of themselves?”

This line of thinking led to Jane’s “Recovery” series, which exists inside the larger Lavendra installation and consists of 28 music videos culled from “the most canonical black divas” of the period from 1993 to 1998 and abstracted through a process that includes scenes translated through Google image searches. “Basically, I was hoping that making them into art pieces sort of re-legitimizes the video itself and makes people want to think about them again—and think about these women again,” Jane said. 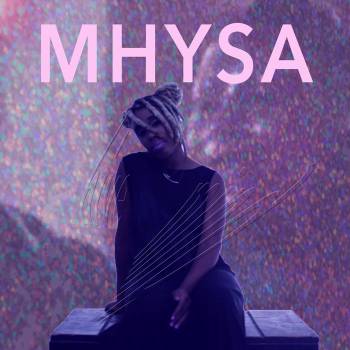 Music factors into Jane’s overall practice in more ways than one. Last year, she released an EP under the name Mhysa with the record label and collective NON. Titled Hivemind, it pulled apart and reconfigured strands of contemporary electronic music into a abstracted, exploratory whole. It also included an amended cover of “Just A Girl” by the band No Doubt. She is also part of the experimental club duo SCRAAATCH with the producer Lawd Knows.

Decades from their origins, the aesthetics of ’90s R&B continue to influence generations of forward-thinking musicians and artists across a wide spectrum. “Afro-futurism was a big thing,” Jane said, “and Hype Williams videos—people haven’t really caught up to what he was doing yet. That’s why Missy Elliott can drop a video and it’s still the most futuristic thing you’re going to see.”

There will be new work on display for Jane’s third incarnation of Lavendra (the other two were part of the PennDesign MFA Program in 2015 and 2016), including new pieces that start with images exported from music videos that are then collaged digitally and printed on fabric. From there, they are layered with rhinestones for fingernail decoration applied with gel. “Every iteration is different, because I learn things each time I put it up,” Jane said. “Everything changes as the space changes,” she said, noting that American Medium’s storefront-like location will be put to use by displaying one of the exhibition’s videos in a window facing the street.

Mainstays of the installation will remain fully intact. Sound on the videos will play at a whisper. The lighting—influenced by the artist’s interest in phenomenology and “how light bounces off certain objects”—will register as a softly enveloping purple. The divas will remain center stage. The show, Jane told me, is “meant to be a space for black women, with a space that’s trying to respect black women’s culture.”