Peter Nadin, the British artist who arrived in New York in the late 1970s, has always been a Sphinx-like presence in the art scene, resisting trends and avoiding career paths typical of his generation. Probably best known today for his “First Mark” series, which used agricultural substances as paint, as well as his farming practice in the Catskills, he spent 15 years not exhibiting—“unlearning” how to make art is how he puts it—immediately after his show at Yale’s British Art Center in 1992. Then in 2011 he returned to show “First Mark” in New York, at Gavin Brown’s Enterprise, a blowout that included sculptures made with objects from his life as a farmer: branches, honeycomb, black walnut. It included an indoor pond with 6,000 pounds of horse honey.

In the late 1970s, pre-farm life, Nadin ran an alternative space in downtown Manhattan, at 84 West Broadway, a live-in studio with the venturesome performance artist Christopher D’Arcangelo. Exhibiting artists included Nick Lawson, Daniel Buren, Sean Scully, Peter Fend, Jane Reynolds, Louise Lawler, Lawrence Weiner, and Dan Graham—the work that had been in the space previously never left, meaning the person who showed next had to deal with the accumulation of work by others. 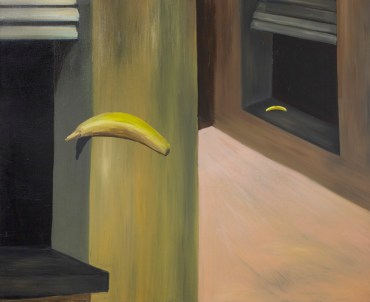 On February 10, New York’s Half Gallery will return to Nadin’s early years, with ten still-life paintings from the years around 1980, after the studio closed, following D’Arcangelo’s suicide, at age 24. Nadin referred to what happened next as a “collapse of mental architecture,” when I met with him at his studio on his Old Field Farm in Hudson, New York, about two hours north of the city by train—the start of the phase of his life that would yield these paintings. The works, all of them on rectangular canvases 30 or so inches across, are of fruit—apples and bananas and plums against varying backdrops. The very earliest feature Venetian blinds, in daylight and then in darkness, the fruit sitting quietly on the windowsill.

The pictures are melancholic but devoid of sap and sentimentality. Unseen by the public in 27 years, they offer clues about Nadin’s early interests, and, true to Nadin, they’re an unusual set of works that don’t fit perfectly into any moment or genre. The style of the series in the show varies widely, and would be unrecognizable as a series—some seem Neoclassical in their lines and shadows, others have a softened, almost Impressionist look—except for the recurrence of the fruit lying still, perhaps on the point of rotting. Of the wide variety in this series, Nadin said that “painting has an Apostolic element within it. As you make the marks, you discover other people who have been there before. You make the marks and let them lead you.” While making these pictures, Nadin worked construction during the day, and painted at night—these paintings mark “stops along the way” of the collapse, he said. 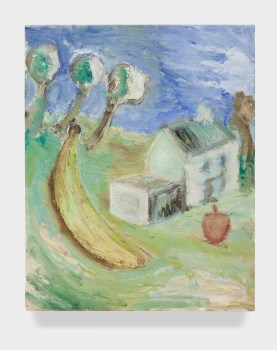 To accompany the images he was making, he wrote a book of poetry that references Blake’s “Nobodaddy,” and documents his regression to a “childlike state.” The work, he said, “pulled him along by force.”

Doing this kind of painterly work was considered retrograde at a time when Pictures Generation artists like Lawler and Sherrie Levine were making icily conceptual photography work and bombastic Neoexpressionism was the preferred style among popular painters.

“In the early 80s, this stuff was considered an aberration,” he said. How did his peers react to this work when they saw it? A pause. “I think Richard Prince reacted positively to what I was doing.” (Prince showed these works at his short-lived Spiritual American gallery on the Lower East Side.)

How does it feel to revisit this period in his life? “Good,” said Nadin. “With these pictures I got my freedom. It gave me autonomy. I didn’t want to be feeling all those things, embarrassed, ashamed…What’s the word when you overcome something?”