The 58th Venice Biennale is full of treasure as well as less adept manifestations of cultural spending. Here’s a fun game. We’ll describe an artwork or an installation, then present something non-art also found in Venice. You decide who wore it better. 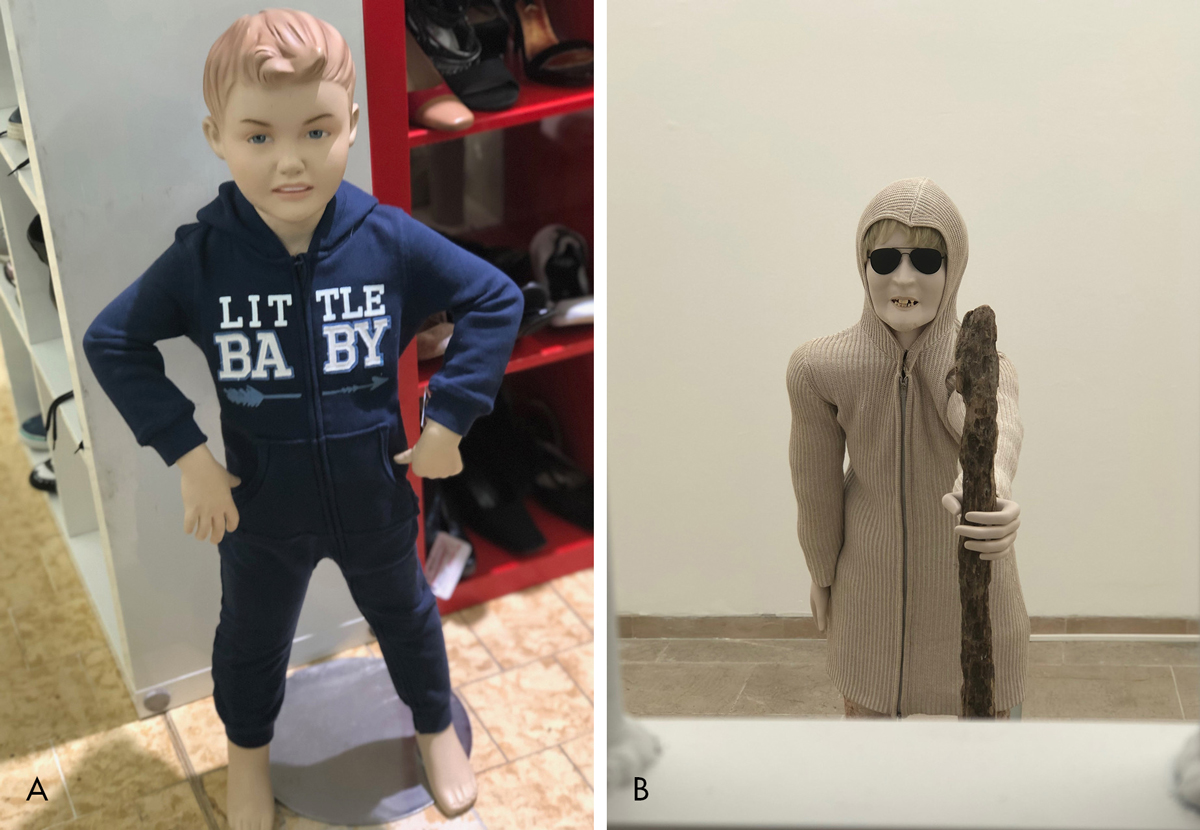 The Giardini pavilions featured multiple old-school Chuck E. Cheese animatronics. But the clear star of this genre was the Belgian pavilion, “Mondo Cane,” with a clunky Somewhat Hitleresque painter a-painting and a chef rolling dough. Everything was a little off, but the whole thing worked. The artist-duo actually states on their press release: “A show well worth the while of parents and their children!”

Which one of these showroom dummies was in the pavilion? (Click for the answer key.) 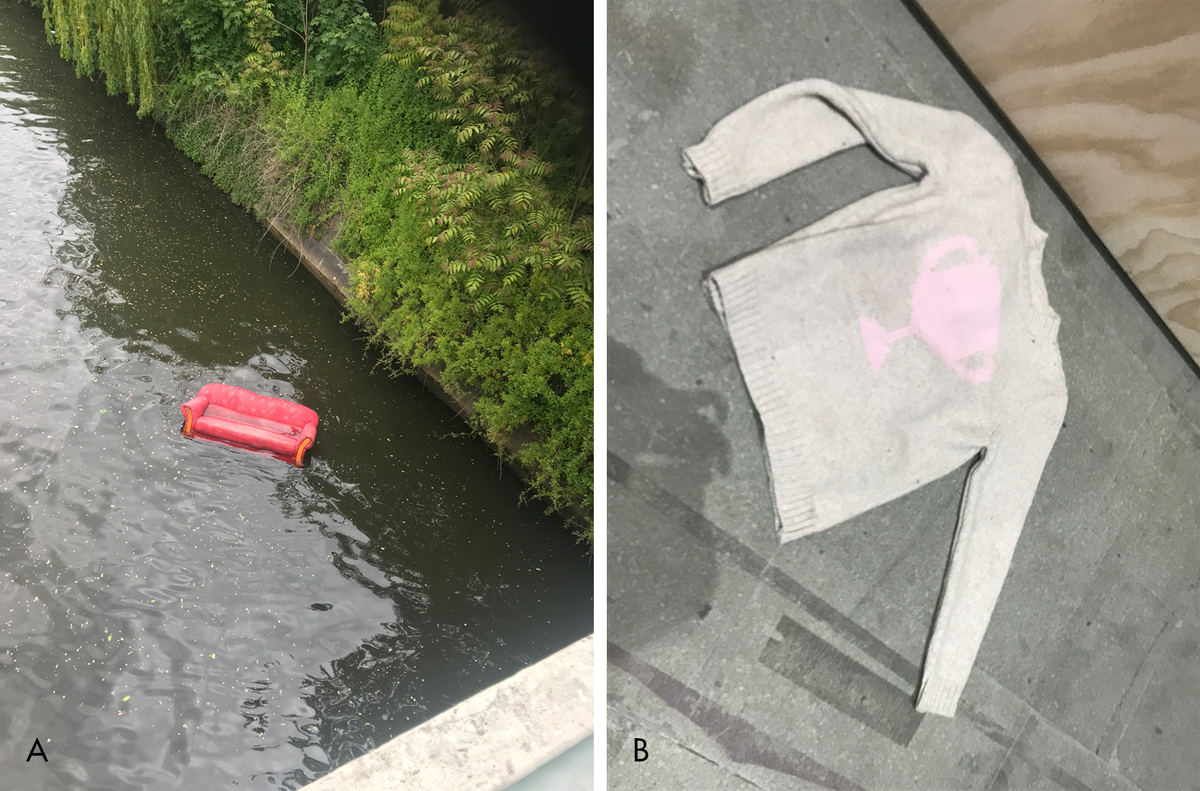 Sometimes art seems like a casually discarded object. Who could guess that these items held carefully embedded intensions pregnant with meaning? The artist states in a text, “I believe that if a person from the Middle Ages was sent into today’s world, he or she would pick up on smartphone use in a week.” The text further explains that elements of the work draw on how emotions affect our habits, architecture, advertising, science, fashion, and public spaces. According to the wall text, this is a “hi-tech and lo-fi mingle, and ideas about how signs communicate in playful ways.”

Contributing to the main Biennale exhibition, did Antoine Catala throw this couch in the canal or did he lose a layer? (Click for the answer key.) 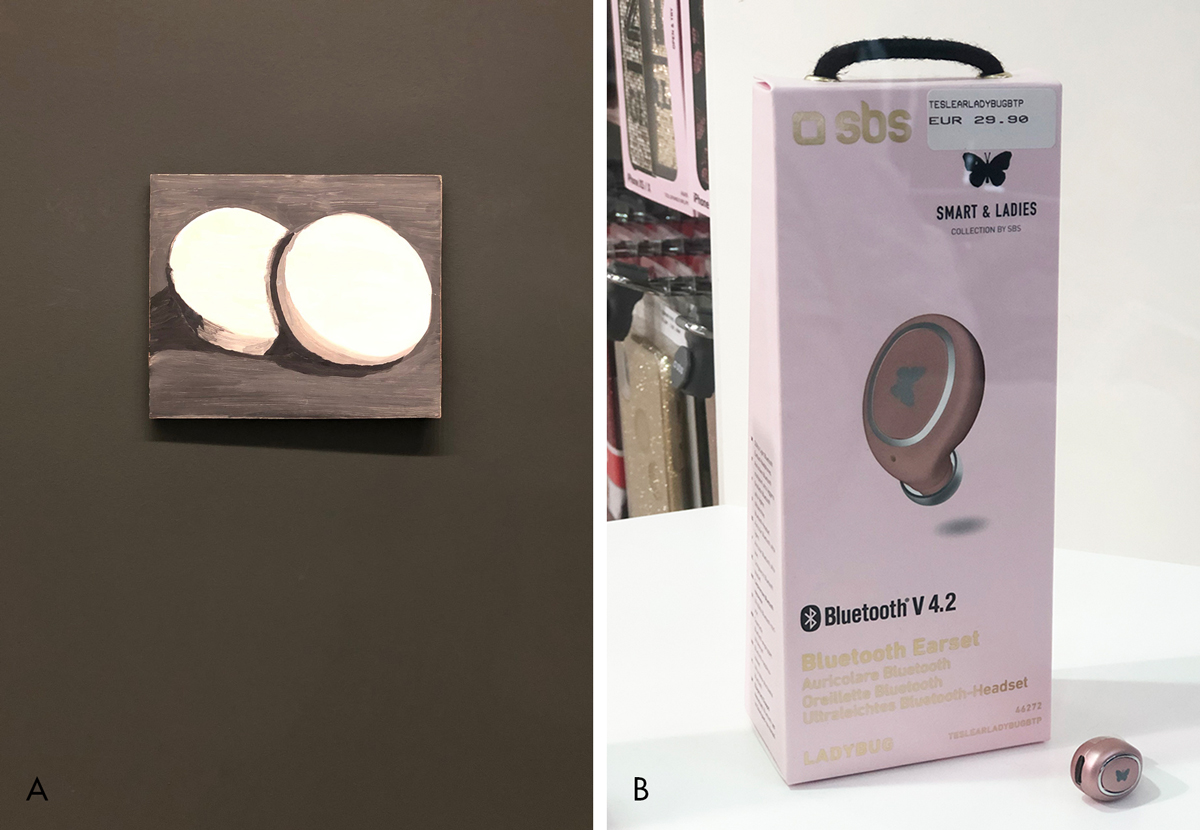 Another thing about Venice—the drinking! A spritz every three feet. While we were in Venice the New York Times bitterly published an article about how the Aperol Spritz was a bad cocktail. Clearly sour grapes by someone who didn’t get a press pass to this year’s biennale. Spritzes are spectacular. So easy to drink! Especially when drunk on a weird medieval island of art. Which brings us to the elegant Tuymans show at the Palazzo Grassi. This show is perfect, but when seen with a mild hangover, his lush portrayal of aspirin is even more poignant.

Which one is the Tuymans? (Click for the answer key.) 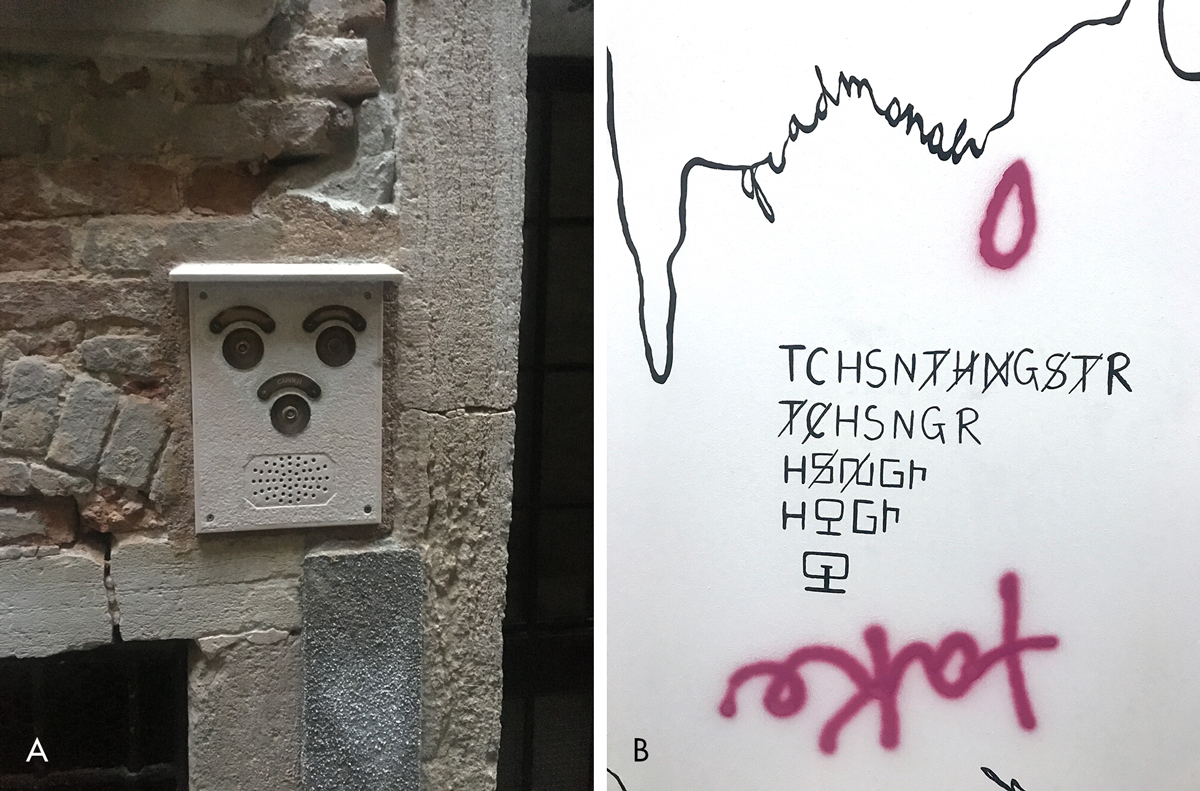 We have noticed that, seemingly contrary to the #MeToo era, Prodigy’s “Smack My Bitch Up” has made an eerie comeback. At the Icelandic Pavilion party, DJ-duo HYPER HYPER mixed “Sail Away” with “Smack My Bitch Up,” and at about five other parties the song was mashed up into dance hits. Youth heeds the call of anarchy in both music and art. In the Italian Pavilion, Chiara Fumai’s nexus of individualist anarchism, occultism, and feminism is an example of how these powerful forces can also be channeled to upset the sterile aesthetics of contemporary institutional critique. The entire pavilion was constructed like a labyrinth, incorporating artists Enrico David and Liliana Moro alongside Fumai. Fumai committed suicide in 2017, so a team of close personal friends like artist Micki Pellerano followed plans laid out in her notebooks in order to posthumously execute a large-scale, winding mural and voice recording. Texts written backwards were revealed in adjacent mirrors—the mood is circular, without beginning and without end.

Which image depicts a detail of Chiara Fumai’s non-linear metaphysical landscape? (Click for the answer key.) 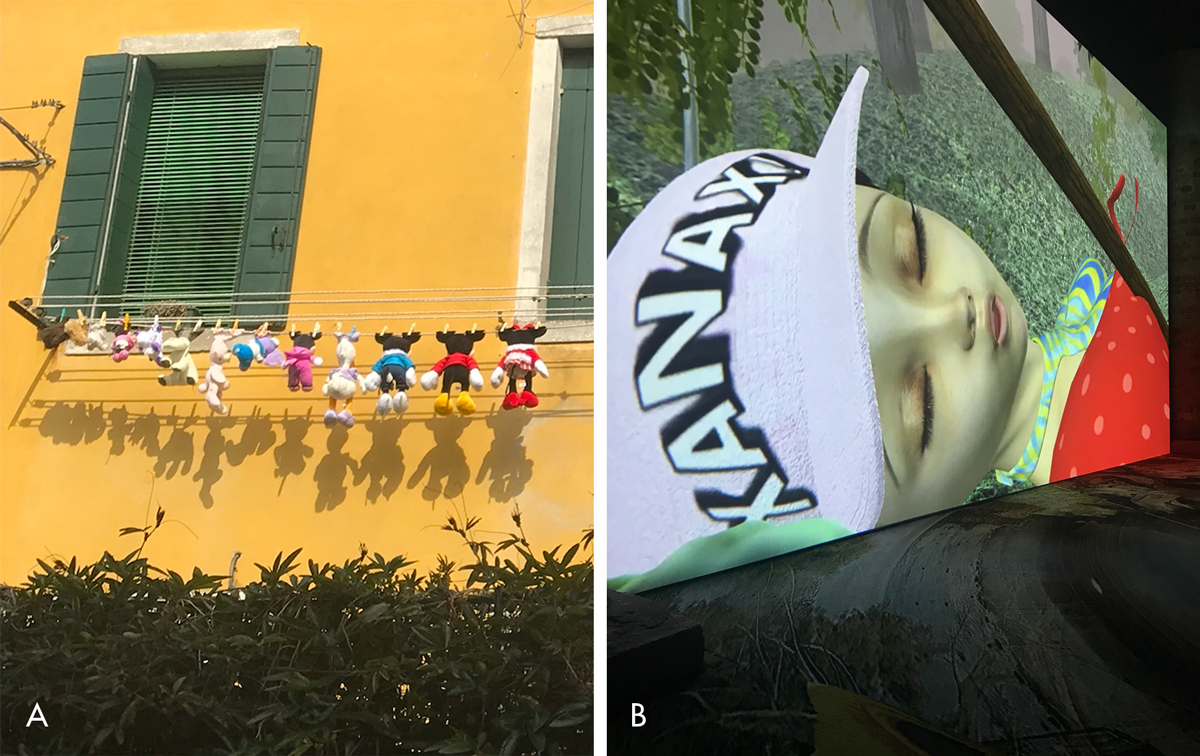 Surreal landscapes sprout various protagonists. This work personifies an ever-expanding absurdist narrative in which heroes find themselves in a space populated by strange hybrids of non-humans and hybrid dog/seals with the head of a boy.

Which is the real Rafman work in Rugoff’s Biennale exhibition? (Click for the answer key.) 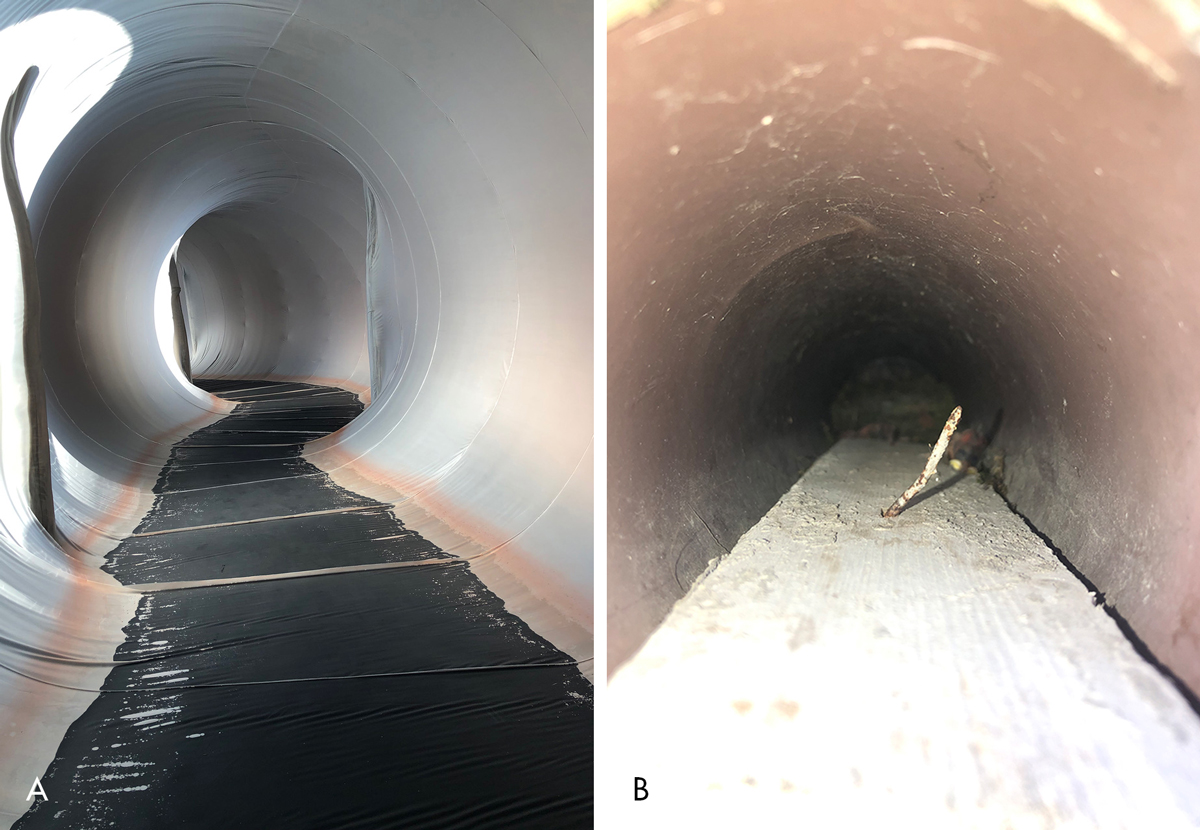 Immersive, experiential art is such a tricky thing. On the one hand, it’s not market-driven and there’s a chance for the sublime. I mean, who doesn’t remember when their Turrell cherry was popped? It’s like art adulthood. Shoplifter’s installation at the Icelandic Pavilion is another example of immersive greatness—best selfies ever. Unfortunately, most of the time these things fall flat. (God forbid I ever have to wait in line to slide down a Carsten Höller again.) Plastique Fantastique’s Blurry Venice in the Venice Pavilion fell in the flat category, too. The payoff at the end of the queue was to tiptoe in socked feet through an intestine with a hint of water underneath. And at the end of the tube was a video that pretty much looked like an Obsession ad circa 1990.

Can you correctly identify the installation? (Click for the answer key.) 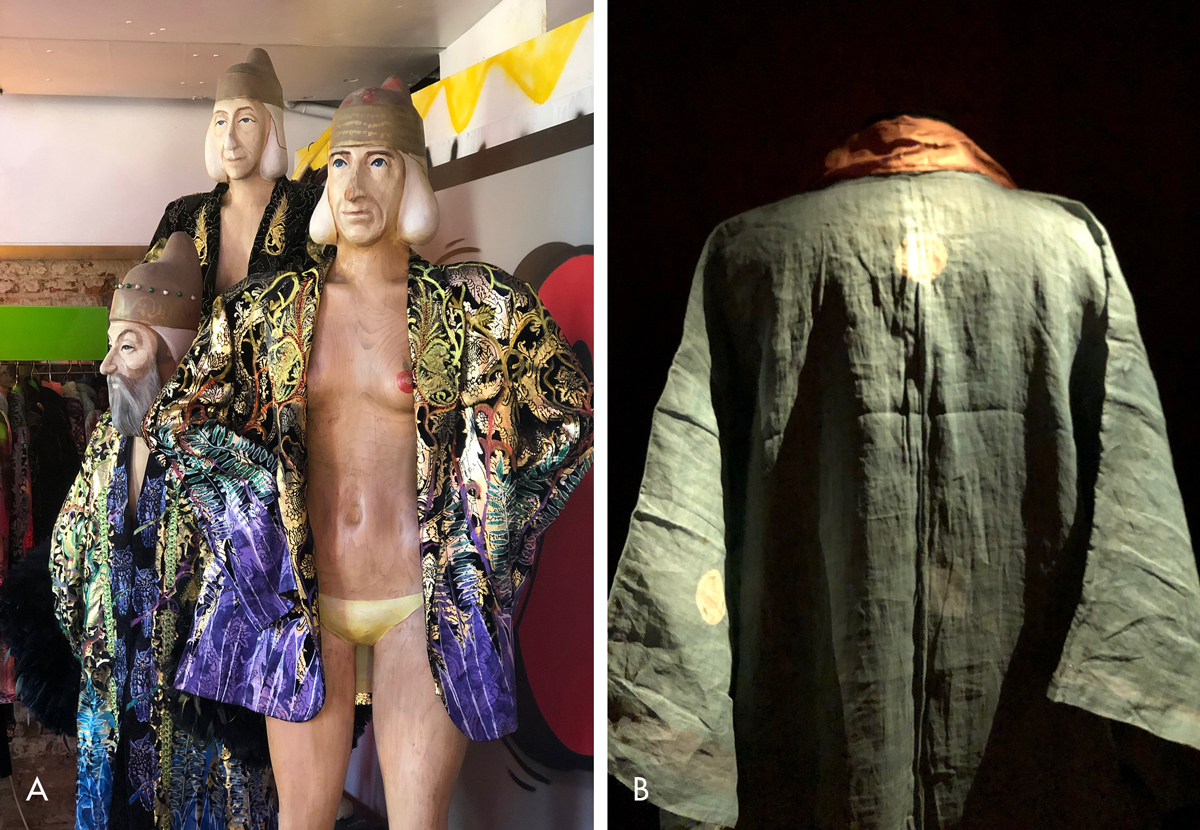 Everyone already knows that Palazzo Fortuny is fantastic. Usually during the biennale, architect Axel Vervoordt—you know, the guy who did Kanye’s house—spearheads a brain-trust on some esoteric theme and throws a big group show. This year, the museum opted to celebrate its own father-and-son legacy, with stunning results. In addition to the lush textiles and lamps from which they made their fame, it turns out that old man Fortuny had some serious painting chops. There’s a black room full of canvases depicting Parsifal that rivals most country’s pavilions. There’s a cool minimalist Korean artist, too. Unexpected and great.

Which work is on view at the Palazzo Fortuny? (Click for the answer key.)

1.) B. Clearly this Frank Haines look-a-like is in the Belgian pavilion. Little Baby: he was just in a thrift store. (Where we bought Amanda Lepore and Divine records!)
[Click to go back up.]

3.) A. This is another giveaway. Tuymans is Tuymans. That palette is unmistakable. Still, lady-only earbuds in the airport need a plug. Rose gold and a butterfly logo? Fuck off SBS. You’re a pig. Also, if you painted these, Mr. Tuymans, we’d somehow find an excuse to like the painting.
[Click to go back up.]

4.) B. Fumai is perhaps best known for a performance/video in which she reads from the S.C.U.M. Manifesto, channeling Valerie Solanas through former Italian Prime Minister Silvio Berlusconi. However, Fumai’s wall-paintings in the pavilion illuminate the expansion of her work from mediated-performance to drawing-based installation. A, meanwhile, depicts one of those “I see Faces” moments in an artfully designed Venetian apartment buzzer.
[Click to go back up.]

5.) B. Although plausible, A is a more naturally occurring hallucinatory installation consisting of Venetians’ carefully hand-washed stuffed Mickey Mice strung out to dry—butts out, smiles in. Jon Rafman’s installation/video room—shown in B—was packed. Not sure if people were captivated by Xanax Girl or bedeviled by the vibrating seats? Maybe both.
[Click to go back up.]

6.) A. Yep, this is the intestine alright. Worth 20 minutes in the sun? Probably not. The other photo is inside a drainpipe. You can’t really see them, but there are baby birds inside.
[Click to go back up.]

7.) B. B is a sexy Fortuny kimono—best look ever. The other image is in the Fiorella Mancini store, another Venice staple. If you need a sequined suit depicting rats and skulls, look no further. It also had a Bob Mizer book for sale.

Jackie Klempay runs Situations, a gallery with a feminist/queer focus in the Chinatown area of Manhattan. Currently on view is a three-artist exhibition,“COFFEE,” which includes work by Yui Kugimiya, David Schoerner, and Nahoko Press. Benjamin Tischer previously had a brick-and-mortar gallery called Invisible-Exports. He now runs the roving curatorial project New Discretions, which is currently presenting Paul Gabrielli sculptures at NADA House on Governors Island in New York, and a group show celebrating ketamine at Affective Care, a treatment clinic on the Upper West Side.