The first segment of Sotheby’s two-part sale of works from the collection of Christo and Jeanne-Claude concluded today in Paris, netting €8 million ($9.8 million) across 28 lots. With only one lot withdrawn before the auction’s start, the first half of the sale tripled its pre-sale low estimate of €2.5 million ($3 million), with each work offered finding a buyer.

Christo and Jeanne-Claude were recognized for their temporary monumental wrappings of public sites, from the Reichstag building in Berlin to the Pont Neuf in Paris. Their 2005 New York installation The Gates ranks among the most widely visited public art projects in history. This year, Christo will realize a long-brewing project, initially conceived in 1961, that will see him wrap the Arc de Triomphe in fabric, set to be executed in September.

Comprising works traded between the couple and contemporary artists in their network, the auction included conceptual works from the postwar era that are slightly atypical for traditional contemporary art auctions.

The first half of the sale was a success, with 75 percent of the works offered surpassing estimates and 21 percent of them landing within their estimates. Only one lot, a mixed media work by German artist Mary Bauermeister, failed to below its estimate.

The top lot of the sale was Andy Warhol’s 1964 black and grey screen-print of Jackie Kennedy, who is shown grieving following the assassination of her husband John F. Kennedy. Christo and Jeanne-Claude acquired the work from art critic David Bourdon. At Sotheby’s, it sold for €750,000 hammer, or €920,000 ($1.11 million) with premium, to an online bidder, landing within its estimate range.

Yet there were also lots on offer by Christo and Jeanne-Claude themselves, some of which were preparatory drafts made for large-scale public art projects, that over-performed. A study for one international public art project, The Umbrellas, Joint Project for Japan and USA from 1991, sold for €1.7 million ($2.06 million), making more than eight times its pre-sale estimate of €200,000 and setting a new record auction price for the artist. Another study from the series likewise played well with buyers, making €1.22 million ($1.5 million), five times its estimate of €200,000. 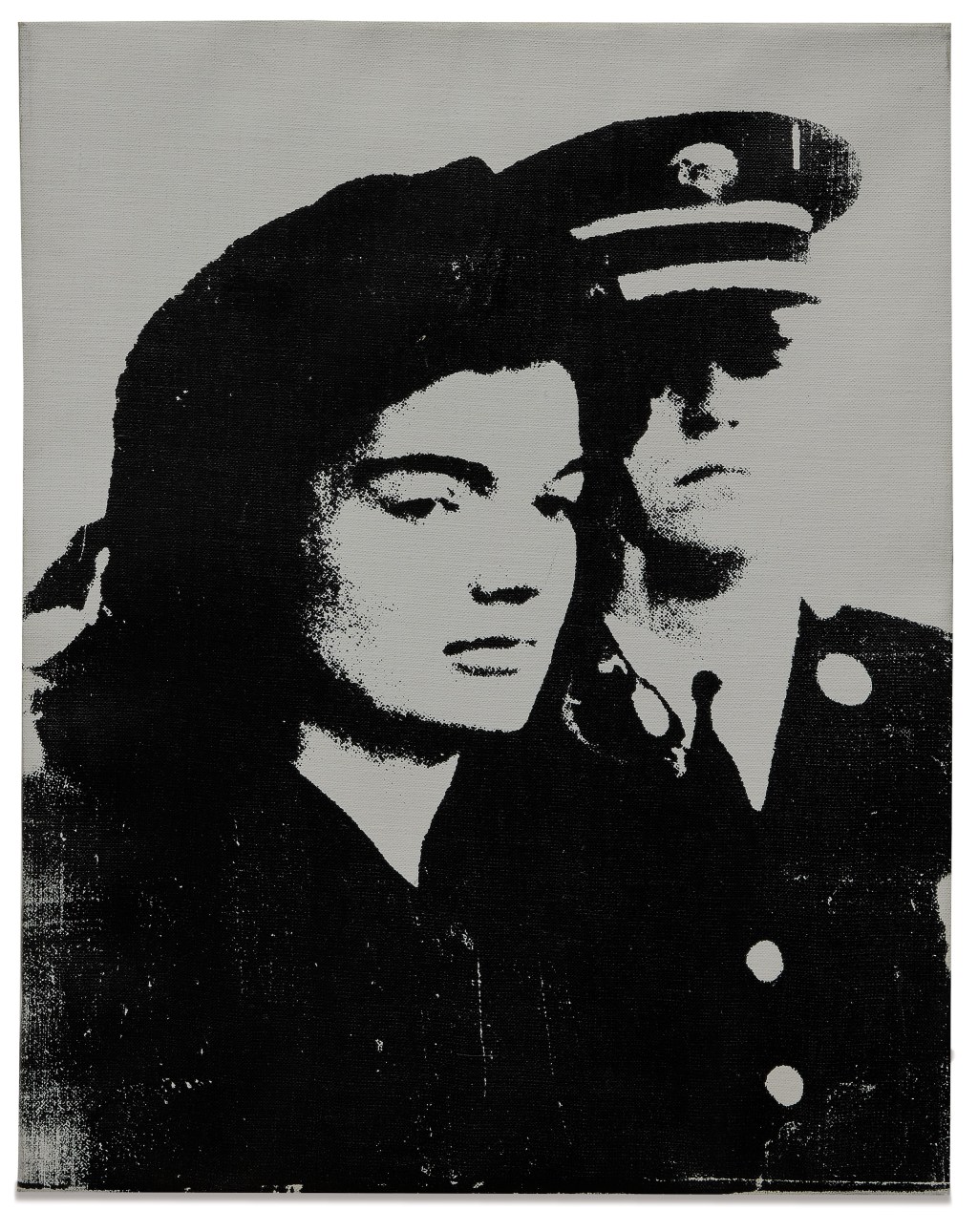 “The Umbrellas was the only international simultaneous project so I think it has a particular cachet to it,” Simon Shaw, vice president of Sotheby’s fine art division, said. “When Christo produced these works, he was essentially thinking through a project from ever possible angle.”

The auction also saw a new record for an artist whose work has seen a posthumous revival. William N. Copley’s Lady Windermere’s Fan (1965), named after an 1892 Oscar Wilde play of the same name, was among the sale’s top lots, hammering for more than 10 times its estimate at €252,000 ($305,000) and going to a phone bidder. Christo was a friend of Copley, who traded the work depicting a male figure in a bowler hat and a female nude sometime around 1965. The work surpassed a recent record for Copley achieved in December at German auction house Lempertz, when Trust Lust (1989), another depiction of the same male protagonist, sold for $257,400.

Today’s result marks a new level of attention paid to Copley, according to Shaw. “His own work was never been properly appreciated on the auction market,” he said, describing the artist as “unjustly neglected.”

Elsewhere, a piece by Allan McCollum, whose work deals with art in the age of mass production, also outperformed. McCollum’s 1979 mint green Untitled (Surrogate) painting was estimated at €3,000 ($3,630), and it drew competitive bidding, eventually selling for €30,240 ($36,600). That result was well above the historical prices for single “Surrogate” paintings by the artist.

Sotheby’s has previously seen success with sales of works belonging to historically important artists. This past October, the house sold a selection of works and ephemera from Keith Haring’s collection. The auction brought in $4.6 million against an estimate of $1.4 million. For Sotheby’s, such sales are bolstered by the artists’ ties to various art world figures —and, in the process, elevate the status of their prior owners, too.

The legacy of Christo, who died in 2020 and continued working solo following Jeanne-Claude’s passing in 2009, was felt at today’s auction. “Today’s results really put Christo where he belongs,” Shaw said.