On Wednesday night, Phillips held a modern and contemporary art evening sale in New York that brought in a hammer total of $97.4 million, or $118.9 million with premium. It exceeded its pre-sale adjusted low estimate of $76.6 million, which is calculated without buyer’s premium. The result is more than double the $41 million total achieved in the 25-lot evening sale held in June 2020. That mid-pandemic sale dipped lower than the equivalent New York auctions from the previous two years.

Led by auctioneer Henry Highly at the house’s new Park Avenue headquarters, the auction sold all 48 works offered. 17 of the lots—including those by artists such as Keith Haring, Jean-Michel Basquiat, Richard Prince, Mark Rothko and David Hockney—came secured with guarantees. Altogether, these works hammered above their $47.3 million aggregate low estimate, bringing in $52.8 million (or $66 million with premium). Those guaranteed lots accounted for 55 percent of the sale’s premium total.

In a post-sale press conference, the executive team at Phillips expressed relief that the global art market continues to have a strong recovery from the pandemic slump. CEO Ed Dolman, who is transitioning to the role of chairman of the auction house’s parent company this summer, said that following the 100 percent-sold Hong Kong sale staged in collaboration with Poly Auction earlier this month, the market for contemporary art is as bullish as ever.

“I don’t think I’ve ever known that in my career,” he said of the back-to-back successes in Hong Kong and New York. Dolman explained that since he began his role as CEO, the market for contemporary art has evolved into a global force, with demand from bidders in Asian countries like China, Taiwan, Singapore, Korea, and Thailand from Wednesday’s sale rivaling the activity from Western bidders.

“There was a lot of intentionality in going after under-represented artists,” said Phillips deputy chairman and co-worldwide head of 20th/21st century art, Robert Manley, after the sale. “Black artists, women artists.”

The centerpiece of the sale was a 1967 David Hockney painting of an outdoor scene from his 1960s “California Dreaming” series—a grouping that brought the artist to acclaim. It sold for $11 million with buyer’s premium. Originally estimated to fetch $12 million, Phillips adjusted the pre-sale estimate to a lower $9.5 million the night of the sale after securing a last-minute third-party guarantee. As big-ticket guaranteed lots often do, it attracted few bids before going to a New York buyer on the phone with Lori Spector, Phillips’ regional director in Zurich, hammering at a below-estimate $9.24 million.

Next up was Wayne Thiebaud’s Winding River (2002), one of the California Pop-adjacent artist’s aerial landscapes. It came to auction after two decades with the same owner, who purchased it from the centenarian painter’s longtime dealer Alan Stone. After a protracted contest among phone bidders represented by Phillips Americas chairman Jamie Niven and head of Phillips’ newly established advisory firm Kevie Yang, the hammer fell at a price of $8.2 million, above the high $8 million estimate to Yang’s bidder. The final price was $9.8 million, the second highest price paid at auction for a work by Thiebaud next to his $19.1 million Four Pinball Machines (1962) sold at Christie’s last July. 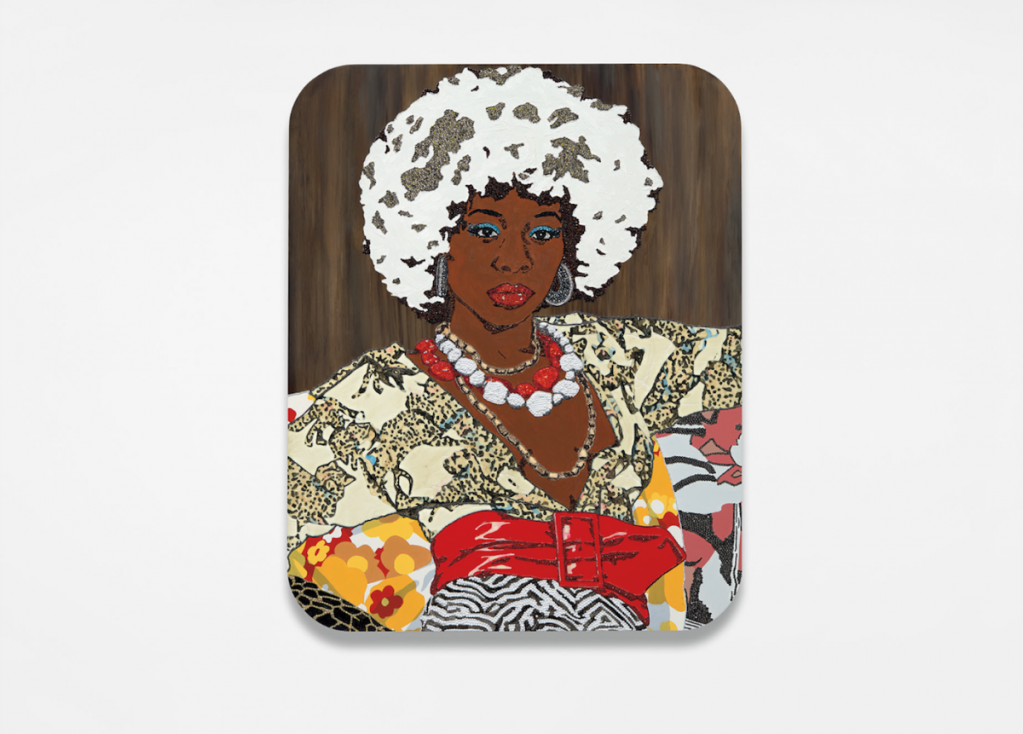 Mickalene Thomas’s bejeweled painting Portrait of Jessica (2011) sold for $1.6 million, nearly triple its $600,000 high estimate, coming close to the artist’s current record price of $1.8 million paid for Racquel Reclining Wearing Purple Jumpsuit (2016), a collaged and glittered portrait, at a Christie’s evening sale in May. Amid her rising market, Thomas will be the subject of a blockbuster four-location exhibition at Lévy Gorvy’s New York, London, Paris and Hong Kong outposts this fall.

Filling out the top sellers was David Hammons’s mixed media work It’s Not Necessary (1990), made of wire basket, sheet music, tennis balls and nails. It attracted 8 bidders from Hong Kong to London to New York who competed for the work. It eventually went to Phillips deputy chairman Jean-Paul Engelen’s phone bidder from Belgium for a final price of $5.5 million. The result was six times the $800,000 low estimate. Once in the hands of curator Jan Hoet, who put Hammons on the map in the ninth edition of Documenta in 1992, it was sold from the collection of Dirk Schutyser, the former president of the Friends of Museum of Contemporary Art (S.M.A.K.) in Ghent, Belgium. The result marks the second-highest price ever paid for a work by the elusive artist, whose pieces are infrequently traded on the open market. His record price is $8.5 million paid for a basketball hoop chandelier sold at Phillips in 2013.

A large-scale Takashi Murakami painting titled Red Demon and Blue Demon with 48 Arhats (2013) sold for an above-estimate hammer price of $5 million and a final price of $6.2 million. It was last exhibited in 2017 at the private museum housing the collection of Oslo-based billionaire Hans Astrup, who died in April 2021 at the age of 82.

In last night’s sale, Phillips flexed its prowess among emerging artists with low supply on the primary market. Works by young artists challenging Western depictions of Black subjects remain in especially high demand. One such work was the opening lot, a 2018 painting of a young Black man with a vacant stare by rising South African star Cinga Samson. Samson has made a name for himself in recent years at the Armory show in 2018 with Cape Town’s blank projects, a presentation for which the dealer won the Presents Booth Prize. Two Piece 1 (2018) was sold by Oslo-based contemporary art collector and translation service owner Arne Austrheim, who bought it in 2018 from blank projects. Samson’s paintings were selling at prices between $10,000 and $15,000 at art fairs that year. At Phillips, after attracting bids from New York, Hong Kong and London, it sold for a hammer price of $300,000 ($378,000 with premium), 12 times the low estimate, to an online bidder.

Julie Curtiss, known for her disquieting paintings of women subjects that riff on Surrealism, turned heads with Three Widows (2016), which sold for $3,500 by New York gallery The Hole five years ago to an East Coast collector. After changing hands to the current seller, it sold at Phillips for $466,200, four times the estimate, setting a new auction record for the artist.

Amy Sherald’s portrait It made sense…mostly in her mind (2011) drew competitive bidding. It depicts a woman dressed in equestrian attire holding a stuffed animal and pays homage to the artist’s childhood experience attending a predominantly white horse-riding camp. At Phillips, 8 bidders battled for the work before it went to a collector from Michigan at a hammer price of $2.9 million ($3.5 million with premium), more than five times the $500,000 low estimate. Since 2012, the work has been on loan at the National Museum of Women in the Arts in Washington, D.C. It was sold by Baltimore collector and NMWA board member Steven Scott, who has plans to donate a portion of the sale proceeds to the D.C. museum’s acquisitions, exhibitions, and endowment funds.

The same New York buyer on the phone with Phillips client advisory director, Philae Knight, bought de Kooning’s abstraction East Hampton V (1968) and the next lot that hit the block by a living artist, Amy Sillman’s Flower Girl (2005). The bidder bought both at above high estimate hammer prices for a collective total of $3.7 million with premium.

Now that the effects of the pandemic have shifted the international sales calendar permanently with little fallout, Dolman said that the evening sale provides proof that top buyers are seeking opportunity to acquire high caliber works at any time of the year. Dolman said that he expects, “less reliance on these major weeks of sales that have dominated the sale’s calendar for so long.”

If You’ve Got a Small Business, You’re Going to Need This Top-Rated Accounting Software