June 15, 2015 7:52pm
Today, ARTnews stopped by the Grand Hotel Les Trois Rois, Basel’s grandest, most storied hotel, for a preview of the Roth bar, designed by Björn, Oddur, and Einar Roth, son and grandsons of the late German-born Swiss artist Dieter Roth and installed by the gallery Hauser & Wirth.

Dieter Roth, who split his time between Iceland and Basel before his death in 1998, made his first bar in the early 1980s, a fully functional bar embellished with found and discarded materials, and the bars have since become a family tradition. There have been around 20 Roth bars, but, Oddur Roth said, this is the only one that is currently traveling. (The others are more or less permanently installed, in private collections or in places like Hauser & Wirth’s branch in New York.) Before being installed at the 300 year old Les Trois Rois, this one, first created in 2004, was in Zurich as part of an exhibition at the Hauser & Wirth gallery there. It has also been shown in the Reykjavik Art Museum, in Iceland, and at HangarBicocca in Milan. It has changed slightly with each new installation. 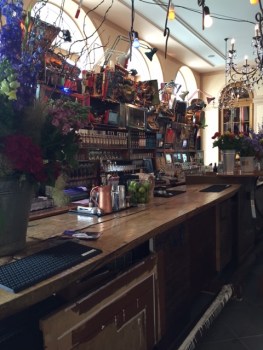 Oddur Roth pointed out some of the found objects embedded in the Roth bar. There’s a tricycle he rode as a kid. There’s a silver tray from the old Roxy nightclub in New York. There’s a photograph of the staff of a cafe in Milan. There is part of a gate from the headquarters of the Pirelli company, a tire manufacturer, also in Milan. And there’s a sign taken from one of the Roths’ studios in Iceland that says “Attention: Please take your shoes off.” “It’s something my father probably wrote when he was cleaning,” Oddur said.

Guests sampled “Le Roi Roth,” a vodka, Lillet, and Cointreau cocktail that Thomas Huhn, award-winning Chef de Bar at Les Trois Rois, created specially for the occasion. Its title, which translates as “The King Roth,” alludes not only to the artist and the hotel, but also, Huhn told ARTnews, to the famous Zurich-based bartender Peter Roth, who will visit the Roth bar tomorrow night. 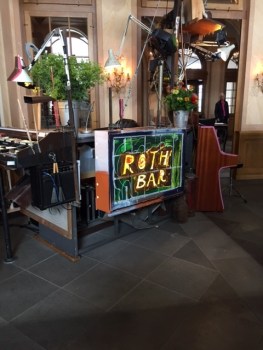 The following few nights at the Roth bar promise to be busy ones—in recent years Les Trois Rois has become a social focal point for Art Basel—which is why Huhn came up with a cocktail that is elegant, but can be made quickly. And on Saturday night, he said, there is sure to be dancing, because Saturday is his birthday. He’s turning 39.