The NY Art Book Fair draws a huge crowd every year, and so it wasn’t a surprise that there were lines everywhere at this year’s edition—lines to get into the bathroom, lines to see certain booths, lines for the KAWS signing (the longest line of all), and lines simply to get into the fair itself. But those lines moved quickly, and once you were inside, the offerings pleasantly overwhelmed, as they always do, the beer and wine flowed, and the vibe was wonderfully buoyant. There are 370 exhibitors from around 30 galleries this year, with thousands of items on offer, most affordably priced, and admission is free from now through Sunday. This is the fair that everyone loves to love.

One of the few areas that wasn’t overpopulated was PS1’s basement, and the largest space down there had been turned over to David Zwirner. Oscar Murillo posters were arranged in stacks around the space ($5 each), which smelled of fresh paint. Hung on one wall was an unstretched canvas with some cloth under it. This weekend, Yutaka Sone will paint something on it, likely a rainbow, a press representative said. From a balcony, the crowds upstairs marveled at the huge open space with microbrews in hand, wondering how to get down there.

Curators and critics were out in force. Douglas Crimp, whose new book Before Pictures was being sold at the fair, was on hand, as were MoMA curator Stuart Comer and PS1’s director, Klaus Biesenbach, who browsed books together at Karma’s booth.

Cory Arcangel was there, too, with his Arcangel Surfware lifestyle label. Its booth was a hit, with platform sandals that said “FUCK NEGATIVITY” on their straps ($59.95 a pair), and white sweatshirts and sweatpants sporting the brand’s logo. “The first art fair I did, José [Freire] at Team made me man a booth,” Arcangel could be overheard telling one guest. “My first art fair experience was as a salesman.” He is a seasoned veteran now, and his wares were selling like hotcakes.

Inside the Volkswagen Performance Dome, artist Ryan Foerster was hawking an impressively wide variety of material through his Ratpress imprint. There were matchbooks, newsprint zines by the likes of Michel Auder and Bob Nickas, and gorgeous handmade books made by Foerster himself. Also among his offerings: very thick bricks of thin paper that he had wrapped with more paper and was marketing as (rather unwieldy) bookmarks. (They seemed more like paperweights.) Foerster explained that he made them with papers discarded by New York City’s Family Court. Where did he find them? “In the Family Court’s garbage,” he said, looking like that was a rather silly question.

Foerster was also selling a handsome little booklet documenting a piece he made, called New York Times Trap, a blue-bagged copy of the Times attached to a metal pan by a wire, designed to catching someone stealing his morning paper. It’s also been displayed in Vietnam. (Long story: best to just go ask him about it, and about his upcoming project with Val Kilmer.) Its price: just $1. A must-buy. It is Ratpress’s longstanding tradition that buyers gets a shot of whiskey, but the evening was still young: the delivery had not yet been made.

M. Wells Dinette was in typically fine form, selling hearty-looking meatball sandwiches, whose glorious scent wafted through the building, delectably potent even on the second floor. Quite a different scent had engulfed the always-scrappy zine tent—dank weed. It smelled as if someone was trying to hot box the place! Which was wonderful. At least one reporter felt very relaxed on the walk home.

Stalwart publisher Primary Information was selling a recent book about the under-rated Norwegian artist Siri Aurdal, who will turn 80 next year, and buttons emblazoned with the phrase “ART WORKERS DON’T KISS ASS,” a refreshing but admittedly debatable sentiment. At just $2, it was another clear buy. (That button is a riff on a small poster they put out a few years back that shows a tough-looking young Art Workers Coalition activist holding a sign that reads, “ART WORKERS WON’T KISS ASS.”)

On the second floor, Gagosian Gallery had set up a tattoo parlor with a pink and purple carpeting, offering tattoos by the likes of Genesis Breyer P-Orridge, Kim Gordon, and Richard Wright. A woman was face down on a table getting one done on her arm during the opening. The tattoos are in editions of six and $250 each, making them perhaps the cheapest artworks the gallery has ever presented. As another dealer pointed out, permanently placing an artwork is quite a deviation from the traditional Gagosian model. As Gagosian himself once said, “I don’t like to sell paintings to museums…because then I can’t get them back.”

The gallery confirmed that the first person to get inked was Visionaire‘s Lars Byrresen Petersen, though it’s unclear how many people are willing to fork over $250 to get Devendra Banhart’s doodles on their skin forever. All in all, the parlor was surprisingly subdued. 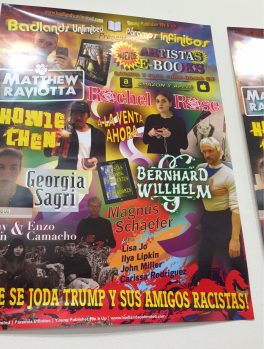 Much more lively was the booth for Badlands Unlimited, the publishing imprint run by the artist Paul Chan that has recently been publishing a well-loved erotica series. Some attendees could be seen giggling over the title of a book by Wednesday Black—How to Train Your Virgin—though not scandalized in the least bit was collector Agnes Gund, PS1’s chairman, who was roaming around with Biesenbach. She picked up a book from the Badlands booth, chatted up Chan—who appeared to have a small bottle of unlabeled booze in his back pocket—and then was on her way.

Also at Badlands: an outrageously awesome poster that makes good use of the classic Microsoft Word Art aesthetic, along with a book that “responds to Donald Trump’s racist, sexist, and xenophobic presidential campaign” written by Chan and his mother.

Also timely, at the Marian Goodman booth: a CD recording (remember CDs? will this be the last-ever mention of a Compact Disc in the annals of ARTnews?) of Gabriel Orozco’s piano compositions, Clinton Is Innocent. It is from 1998, but certainly seems timely.

But one of the great joys of the New York Art Book Festival is discovering the weird objects for sale, the things other than books. At the Art Vandelay booth, there were mugs by David B. Smith with phrases such as “Those jeans make your ass look good.” There were rubber erasers at the Guerrilla Girls booth that said “ERASE DISCRIMINATION.” Vacancy Projects had Drake x Art World T-shirts (1-800-JAMESTURRELL), and Mitsu Okubo had some wildly immature shirts that riffed on artists’ names (“Jackson Polyps,” “Agnes Fartin'”). There was a Jon Pylypchuk ashtray at the Petzel Gallery table for $125, and a Roy Lichtenstein paper plate at the Printed Matter table for $450.

And, for some surprisingly high prices, Vasta Editions had for sale an impressive amount of vintage pornography.

As the night grew darker, visitors retreated from the sweltering museum (helpfully, both Goodman and the fair itself offered limited-edition fans by, respectively, Orozco and Ken Kagami) to the courtyard, sprawling out on picnic tables and large pillows, listening to dubbed-out electronic music. At one point an entrancing sample came on the speakers of a man saying, over and over, “I can see the Statue of Liberty from here.” Not true, of course, but the view was still pretty good.

Click the images below for a slide show of the NY Art Book Fair.

An ambitious display at the RAW MEAT Collective booth.

The Gagosian tattoo parlor in action.

Copies of the Slash punk fanzine at Hat and Beard Press.

Goodman had quite a few curiosities, including Marcel Broodthaers' Interview With A Cat ($25), which is actually exactly what it sounds like, and Lawrence Weiner temporary tattoos ($1).

A CD from 1998 of piano pieces by Gabriel Orozco, at Goodman.

Orozco fans at Goodman. Free, and much appreciated given the intense heat inside the building.

The Deste Foundation, with records by Kim Gordon.

The view to the basement.

In Fashion: The Inflationary Mood of Wary Consumers

Price Drop Alert: You Can Get Apple AirPods for $110 Right Now via Amazon