It may snow in New York this weekend, but down at Art Basel Miami Beach, it’s all sunshine and beach parties and brand collaborations cut through with a fear that people are just not showing up to fairs anymore. Art Basel may feel like “the party before the apocalypse,” as Brooklyn Museum director Anne Pasternak put it, but hey, Mark Ronson is DJing! Here are some notes from the Day-Glo madness.

— Let’s hop off the flight, drop off the bags, and head to a $30 million waterfront mansion taken over by the restaurant Eleven Madison Park. Chef Daniel Humm is a collector who put a Rita Ackermann painting at the fulcrum of his restaurant’s dining room, but before buying art later in the week, he had to make truffle burgers and fancy hot dogs for a fusillade of brand partners: Porsche x Sonos x Surface x Chateau d’Esclans. (A publicist asked me to note that this was the “Surface x EMP Experience.” Happy to oblige.) And hey, craft cocktails! Like nearly everything else in this increasingly sinking city, the house is very much for sale.

— But it’s all about the small things, like getting seated at Joe’s Stone Crab before Tico and David Mugrabi, as my party did Monday.

— Tuesday morning spin through the museums. The Bass museum’s renovation looks lovely, all open space and clean lines, even if Ugo Rondinone’s unloaded clown car upstairs had its share of skeptics. Mika Rottenberg’s concealed ceiling fans and wagging disembodied ponytails had its die-hard fans, though.

— A fun thing about Miami is you get to spend hours in cabs going across causeways to and from the beach. I had three crossings just during the day on Tuesday, and then returned to swing through openings in the Design District: the newly opened Institute of Contemporary Art, Miami in a glittering silver building by the de la Cruz Collection, the third Gagosian-Deitch exhibition at the Moore Building, and the Rubell Family Collection. The show of acquisitions made since 2014 makes it clear that the couple has an eye beat by few others—in one room, it’s Frank Benson’s Juliana (2014–15), so memorably included in the 2015 New Museum Triennial, and in the next it’s Josh Kline’s Cost of Living (Aleyda), 2014, the work that writer Ben Lerner used to launch into an existential exploration of museum conservation in the New Yorker.

— But who cares, it’s Miami—let’s go to another $30 million mansion and eat truffle-slathered canapés. This time it was the home of Steven and Petra Levin, who endowed the ICA’s sculpture garden and then offered to host the opening night dinner. The collection, acquired in part through Sotheby’s Fine Art chairman Amy Cappellazzo, announces itself early on—one walks in to see two giant works by Jeff Koons, Hulk and Baroque Egg with Bow. “Subtle, isn’t it?” a companion remarked. I walked outside, and that’s when the yacht rolled up.

— Identify yourselves, couple maniacally sucking face as the waves washed over you to the amusement of everyone at the White Cube party at Soho Beach House!

— Another water crossing, this time to make it to the Double Club, a project first staged by the artist Carsten Höller and Fondazione Prada in London in 2008. The work consisted of bars and a restaurant, which makes it quite easily adaptable to Art Basel Miami Beach. Inside there was an extremely credible Italo disco, and outside was a neon-heavy tiki bar where the host was blasting Wyclef Jean songs. Oh wait, that actually was Wyclef Jean.

— On Wednesday, the fair opened after a fire marshal snafu kept Larry Gagosian and others sweating outside for 30 minutes. Apparently, Gagosian passed the time reading a print newspaper while everyone else frantically called anyone who was inside, asking them to sneak them past the city authorities.

— Owen Wilson looked at a Basquiat at the Van de Weghe booth, and said, “Oh, wow”—just like he does in the movies. Leonardo DiCaprio also stopped by and bought a Basquiat for $850,000.

— Here is the nutty wall text for the latest in a line of increasingly nutty works Darren Bader has been giving Sadie Coles HQ to put in fair booths. 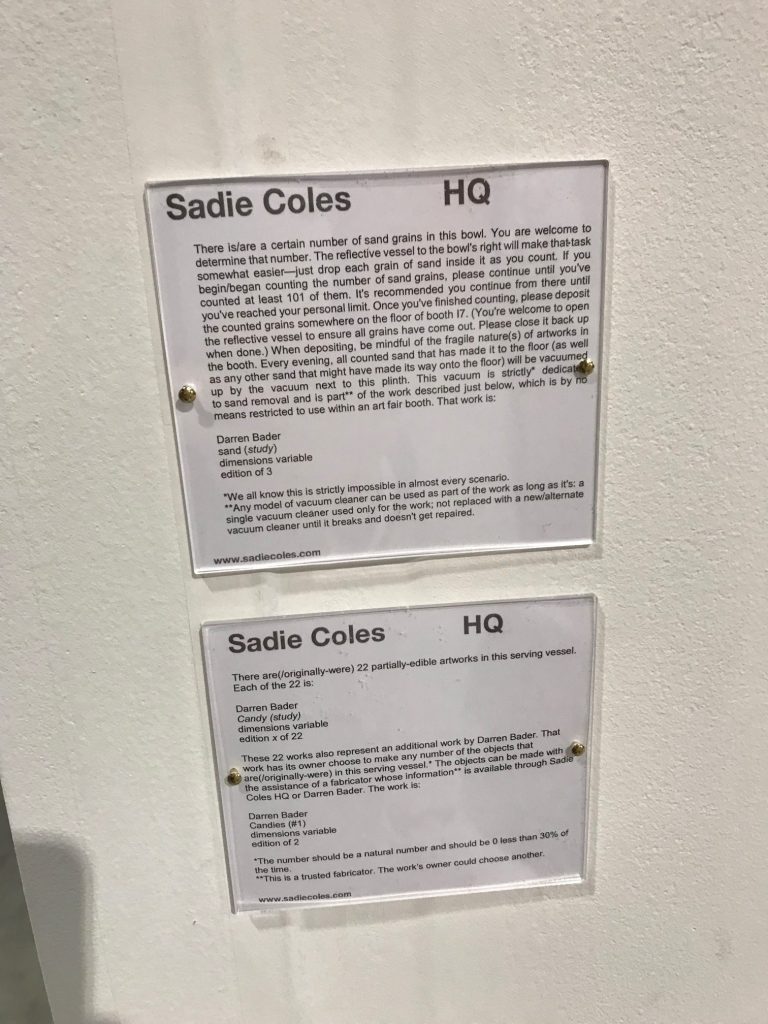 — After feting him in Venice during La Biennale by renting out a 15th-century palazzo for the week, Hauser & Wirth threw Mark Bradford another party in Miami, including beachside dinner with endless grilled lobster and Argentinean flank steak. After a brief dalliance with a party for collector and photographer Johnny Pigozzi thrown by Galerie Gmurzynska (Paris Hilton was among the attendees), it was back to the Hauser party, which had recruited Mark Ronson to DJ. Gallerist Iwan Wirth danced to “Pony” by Ginuwine.

— Left for the dive bar Mac’s Club Deuce with some editors and got hustled at pool by some art handlers.

— Thursday was NADA, and that night, while attending a rather lovely cocktail party at Soho Beach Club hosted by David Zwirner gallery, a friend asked if I wanted to go to the beach by the Edition and see an intimate performance by Drake. Oh, did I ever. “Thanks for coming to see me—I know y’all got sculptures and paintings and shit to look at,” is a thing Drake said onstage. This was followed by a performance of “Hotline Bling,” which was announced by a flock of drones that emerged above the stage with LED signs that bore the song’s name.

— And then I walked outside and saw the Louis Vuitton x Supreme Ferrari made famous by a 15-year-old sneaker hypebeast named Money Kicks.

— The waters will be one foot higher by Art Basel Miami Beach 2030.