A selection of comments . . . and complaints. 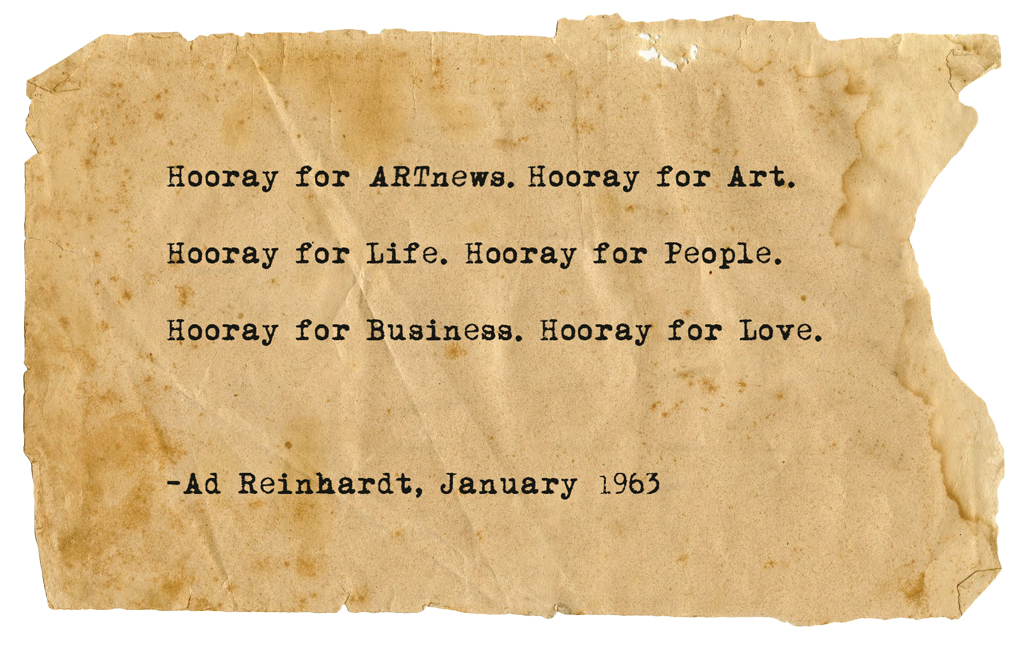 If [Allan] Kaprow wants to create a new synthetic art of all the senses, that is a marvelous, old, nineteenth-century idea but it is cheap to treat Jackson Pollock as a stepping stone for Kaprow’s own still unrealized art.

On this felicitous occasion I would like to express the wish that ARTnews, as a knowledgeable and interested bystander, take an occasional look at the architectural scene.

I have my history and my work has its history; working drawings, changes, mistakes. However I don’t want the viewer to have to love me because of all that “history.” Pure Romantic tactic?

Thank you for the April number of ARTnews which you were kind enough to send me. I found it very well worked out and extremely flattering to me.

Please do everything possible to save the German paintings in Washington from returning them now to the other side of the Spree (the Kaiser Friedrich Museum), that is behind the Iron Curtain. Raise Heaven and hell, the whole Congress, and the art world—as far as it is independent of underground politics—against such “Cultural Bolshevism.”

This sculpture by me was stolen from Willard Gallery, 23 W. 56th St., New York, in January or February. It is a hanging piece 39′ high, of steel, copper and bronze with a signature nameplate carrying the date 1-1-54, ARK. 53. . . . I will pay a reward for any information.

Why must you gossip about the personality of the artist? Some of us are interested in painting.

The reproduction of The Mirror by Léger in the October ARTnews, accompanied by a review of our Léger show, was printed upside down. But I think the inversion went rather well with the viewpoint of the reviewer.

In all the time that I worked with the aforementioned bulbs not one of them stabbed me.

This is to request your correcting the spelling of my name as printed in the May number of ARTnews. It is not Hans Nemuth, but Hans Namuth.

I find it increasingly hard to keep up with contemporary art, particularly with the titles affixed to some objects. A signal example has appeared in the current number of ARTnews [Feb. ’61] where Mr. Barnett Newman’s composition is entitled Vir Heroicus Sublimis.

A version of this story originally appeared in the Winter 2018 issue of ARTnews on page 62.

Kinzinger: Hutchinson’s Bombshell Testimony Is ‘Inspiring’ Others to Come Forward