Books, books, books, books—what’s not to love? There are worse ways to bide your time, and few better ways to make your time worth more than biding. For some favorites from this year—big and small, art-related and not necessarily—read on. — The Editors of ARTnews 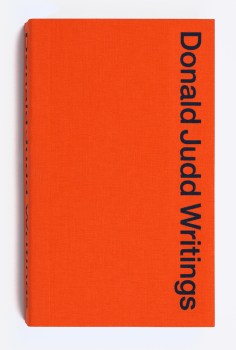 Donald Judd, Donald Judd Writings (Judd Foundation/David Zwirner Books)
At 1,000-plus pages, Donald Judd Writings, a mega-anthology that collects written work from the artist’s student days to a year before he died, in 1994, including previously unpublished texts, is big enough to injure a small animal and smart enough to change how you see art. Along with the recently reissued treasure Donald Judd: Complete Writings 1959–1975 (the “Yellow Book,” as it’s affectionately called), the new tome is proof-positive that Judd was as terrific a critic as he was an artist. With his reviews, essays, and complaints, Judd, never one to mince words, offered a master class in how to write clearly about art. In a time when art writing has become more tangled than ever, with –isms and jargon to spare, Donald Judd Writings is the book we need to read and reread right now. —Alex Greenberger

Matthew Barney, OTTO Trilogy (Gladstone Gallery/Yale University Press)
Drooping barbells, flaccid picture frames, mechanized rectal piercings, a strapping man dressed like a 1930s movie actress at Cannes—imagery of a richly beguiling and interconnected sort abounds in Matthew Barney’s OTTO Trilogy. Published to accompany a revisitation this year of Barney’s career-making first show at Gladstone Gallery in New York, the catalog comes with good photography and dynamic video captures from a formative body of work that predated Cremaster and all the rest to come. Oakland Raiders jerseys, bagpipes and tartan plaid, machines for better living put to prurient use—the excess of actions and things taps into swollen histories of performance art and the sort of sordid systems-analysis of Marcel Duchamp. The book benefits too from a probing essay by Maggie Nelson (the author of The Art of Cruelty), a clear-eyed look into the OTTO trilogy’s “particular, relentless conjoining of athletic, medical, pharmacological, and pornographic registers.” —Andy Battaglia

Teju Cole, Known and Strange Things: Essays (Random House)
Teju Cole’s first book of essays, Known and Strange Things is an elegant reminder of what it means to look. Every essay produces a collection of glowing mental images. The greens and grays of the English countryside slide by as Cole describes a journey to W. G. Sebald’s grave. In another essay, Cole remembers the bright blue blouse of a Nigerian girl abducted by Boko Haram, as seen in a haunting photograph by Glenna Gordon. The photo is included in full color, along with a collage by Wangechi Mutu and other photo works by Malick Sidibé, Roy DeCarava, and Cole himself. Trained as an art historian, Cole summons the voices of Walter Benjamin and Aby Warburg, James Baldwin and Édouard Glissant, while weaving visual and narrative arcs between the likes of Pieter Bruegel and Barack Obama. —Angela Brown 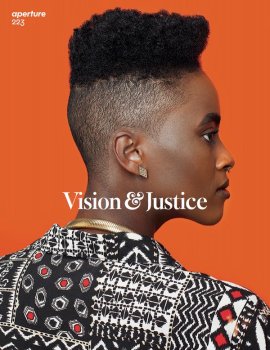 Aperture magazine, “Vision & Justice” issue
In the past few years, the “art world” has been dismissed as extravagant and excessive, hollow and vain, devoid of substance. In many ways that has been true. But then there are instances that remind us why we fell in love with art: seeing a show that elicits a strong emotional reaction or spiritual connection, reading a piece of writing that elucidates how art can change us all for the better. That’s the premise of this summer’s “Vision & Justice” issue of Aperture magazine, guest-edited by Harvard professor Sarah Lewis. It looks at the importance of historical and contemporary photography to the black experience in America—or as Lewis puts it: “the role the arts have played in getting us to see our blind spots that have led to social justice.” It also stresses the importance of visual literacy. To Lewis, this means “the way in which an image can shift our sense of what’s in front of us, our vision unto the world,” as she told me in an interview earlier this year.  In a time haunted by racism and hatred against many peoples in this country and abroad, I can think of no better way to teach the importance of the image than this celebration of the many contributions that black artists have made—and the first step in Aperture’s planned “sustained engagement” with black photography. — Maximilíano Durón 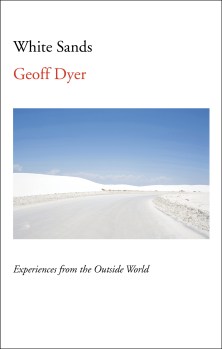 Geoff Dyer, White Sands: Experiences from the Outside World (Pantheon)
In White Sands, an all-too-human writer sheds—and intercepts—light on matters as seductive as travel, sex, art, and food. Geoff Dyer is a charming, self-effacing, and ironical observer whose picaresque journeys in search of spiritual, aesthetic, or other forms of enlightenment take him from Beijing to the northernmost regions of the Arctic Circle, where he and his wife, led by snow-racing sled dogs, hope to glimpse the Northern Lights. (They don’t.) The book also embarks on hotter and more temperate schleps through conceptual fields of art—Robert Smithson’s Spiral Jetty in Utah and Walter De Maria’s The Lightning Field in New Mexico—and on through Dyer’s unwieldy mindscape. We see what conceptual art demands—how boring it can be as we wait for action, and then how rewarding. Among his Don Quixote-esque adventures, our antihero picks up a suspicious hitchhiker and then leaves him in a bathroom. Finally, it’s back home to L.A., where the journey becomes free-associative with high- and low-culture musings, from Theodor Adorno to Charlie Chaplin to lots and lots of jazz.  Through it all, Dyer’s errant thoughts and experiences magically and mysteriously embed in our own happily confounded mind. —Barbara A. MacAdam 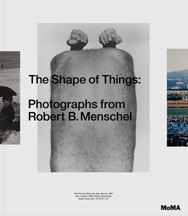 Quentin Bajac, The Shape of Things: Photographs from Robert B. Menschel
(MoMA Publications)
Essentially a tribute picture book for an eponymous exhibition on view at the Museum of Modern Art in New York until May of next year, this tome features 60 photographs from MoMA’s collection selected by chief curator of photography Quentin Bajac. Each image was acquired with support from Robert B. Menschel, a museum trustee (and amateur photographer himself) who joined MoMA’s Committee on Photography in 1977. The first piece he helped acquire was an 1863 photograph by Lewis Carroll depicting a 10-year-old girl lost in her own world while twisting her hair. Since then, Menschel helped shepherd more than 500 works into the museum’s holdings. With images from photographers as varied as Carrie Mae Weems and Weegee, this book presents a beautiful selection of photographs from the collection. —Katherine McMahon 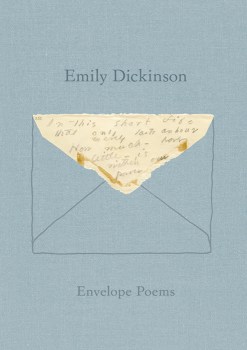 Emily Dickinson, Envelope Poems (New Directions)
Late in life, Emily Dickinson began writing poems on bits and pieces of envelopes. Three years ago, Christine Burgin Gallery and the publisher New Directions compiled these spare, adventurous pieces in a single volume, pairing photographs of Dickinson’s humble little manuscripts with careful transcriptions that show exactly how Dickinson spaced and oriented her words on the page. They offer tantalizing hints at Dickinson’s process—how the irregular slices of paper guided her thinking, and where she returned to a poem, crossing out words or adding them between the lines. One could spend years parsing and pondering these works, and so it was a delight when the original publishers issued a new, compact version this year, just the right size for slipping in your jacket pocket, for having it on hand at all times. — Andrew Russeth