Tonight, on the longest night of the year, 13 different venues will play host to the stateside edition of “Ugo Rondinone: I ♥ John Giorno,” a massive exhibition of work by the artist John Giorno presented as a work of art by his husband, the Swiss artist Ugo Rondinone. It’s an expansion of the show that went up at the Palais de Tokyo in Paris in 2015, a huge collection of paintings and poems and videos and installation and public displays by Giorno, Rondinone, and a long list of artists who are friends of both. And it’s located in various places around town, often in downtown spots close to where Giorno has lived, worked, performed, and hung out during his half-century in New York City.

The venues opened this morning to press ahead of the public opening tonight, so I decided to take subway trains and Citi Bike rides to see them all. 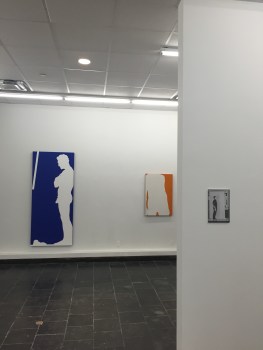 The 6 train took me up to East 68th Street, where I passed college kids loading up lunch at halal carts on my way to the charming little gallery nestled inside the Hunter West Building. Inside was a suite of portraits by Giorno’s friend Kendall Shaw, and the studies for these portraits, which present a 26-year-old Giorno dancing in the nude. 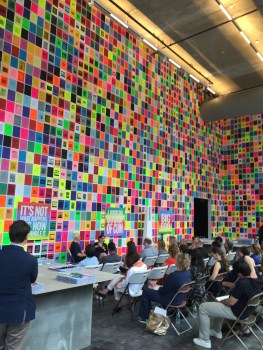 The 71-story skyscraper Sky in Hell’s Kitchen now has an art space in the lobby, and it is called Sky Art. “I ♥ John Giorno” is the first show here, and Rondinone arranged the room so that his husband’s archives spangle the 30-foot-high walls with technicolor. Colored poem paintings dot the proceedings. After hopping a Q to Times Square and biking over to the West Side—across the northern rim of the burgeoning metropolis that will be Hudson Yards, the half-built monoliths sprouting from the abandoned track-lain land—I docked the whip and rolled up to Sky, which is next to the bus depot. The press conference happened to be in progress, and Museum of Modern Art curator Laura Hoptman was interviewing Giorno. He was talking about how he met Rondinone. “He saw me perform at St. Mark’s Church in 1998,” Giorno said. They made plans to collaborate on work. Instead of collaborating we became lovers immediately.” 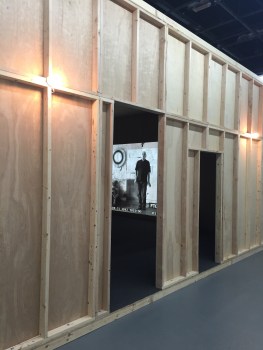 What a lovely day for a ride on the water through Hudson River Park! Before long I was in Chelsea, where the Kitchen has on display Rirkrit Tiravanija’s video work untitled 2008 (john giorno reads), a ten-hour film Tiravanija made in Giorno’s studio at 222 Bowery—known as the Bunker, a former YMCA once inhabited by William S. Burroughs where Rothko painted the Seagram Murals. It’s installed in a plywood hut Tiravanija made exactly to the specs of Giorno’s studio, and inside it is a custom-made bench by Mark Handforth. It’s comfy. 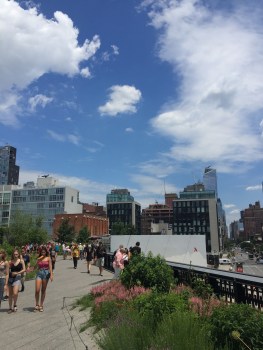 Up here in the world’s greatest urban garden tourist trap we have a video Michael Stipe made with Dominic DeJoseph for R.E.M. (The band final music video before breaking up.) The idea came to Stipe in a dream: he asked John Giorno and the actress Kirsten Dunst to be in two different videos, and they both said yes. And then it played out just like that in real life. Alas, the piece doesn’t start screening until 7 p.m. tonight, so I’ll have to go back for that one. 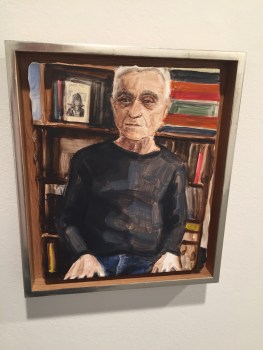 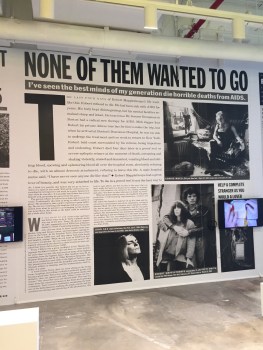 An annex of the space uptown, 205 Hudson Gallery faces the spray of cars barreling into and out of the Holland Tunnel, and they will all be able to peek into the windows and the walls covered in pictures of those Giorno has helped through his AIDS Treatment Program, as well as into an area devoted to Giorno’s lifelong dedication to Tibetan Buddhism. The praying area has several items on loan from the Rubin Museum of Art. 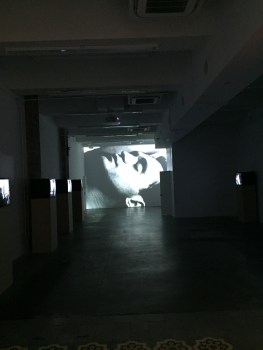 It’s a quick walk across TriBeCa in the heat to get to Swiss Institute’s temporary space, which the organization will be in while its permanent home in the East Village gets built out. Here we have works by Andy Warhol, films that were digitized for the show in Paris and that have never before been shown in the United States. Sleep, the early Warhol “anti-film” that shows Giorno unconscious for hours, is, of course, here, and it looks fabulous in the blacked-out space. But Sleep kind of makes you want to take a nap. No time for a nap! 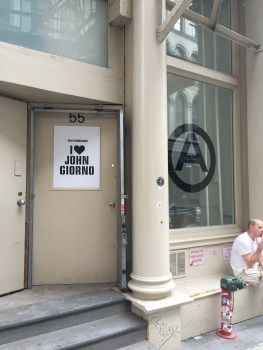 The other downtown New York kunsthalle hosting special events and readings, but there wasn’t anything happening this afternoon, so they kicked me out. I shall return. 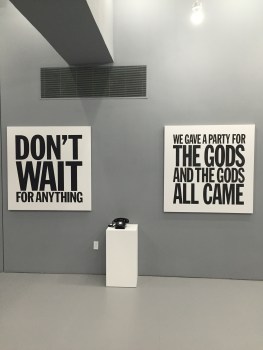 I missed Red Bull’s art center somewhere in my travels, so I hiked back up on the 1 and arrived to see Giorno-branded merch in the window of the energy drink-branded art space. Inside were video monitors that Rondinone made for the Palais de Tokyo iteration that show the text of the poem while headphones play a recording of Giorno reading the poem. It’s a nod to Giorno’s 1968 Dial-A-Poem series, where anyone could call up a certain number and listen to a recording of a poem. The phone lines were quickly jammed. 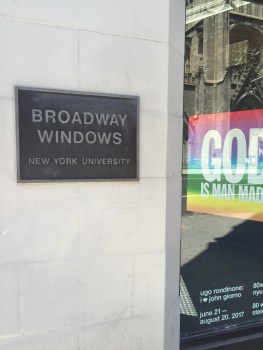 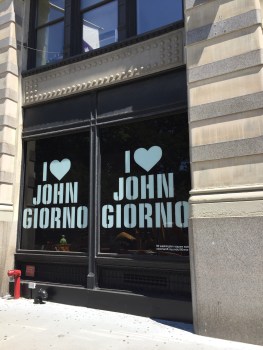 Also deep in NYU territory is this building beside Washington Square. Its windows have been taken over by the show’s logo. It was created by Scott King, the graphic designer who has worked with the Pet Shop Boys and Malcolm McLaren, whom Rondinone tapped to handle the show’s graphic identity. 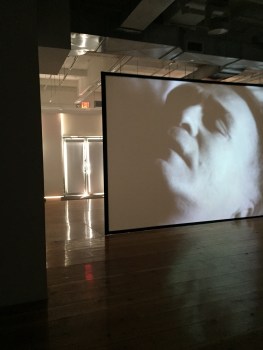 Just steps away from what was once CBGB, where the John Giorno Band played many a gig, is this East Village nonprofit. Inside is a gem of a work by Pierre Huyghe, Sleeptalking (1998), which emerged from the eight-hour conversations Huyghe had over the course of a five-day spell at the Bunker, filming and recording Giorno, and then laying the footage atop that of Warhol’s Sleep. 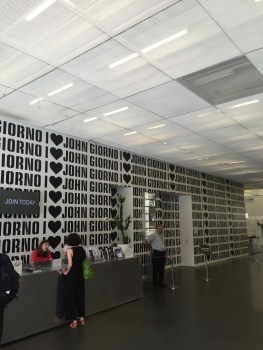 The building that once had atop it Rondinone’s epic Hell, Yes! (2001) now has another one of his works: the lobby has in it wallpaper of the show’s logo, the words “I ♥ JOHN GIORNO,” plastered on all sides. And then right across the street is the Bunker.