From the founding of the Louvre in 1793 to the emergence of the Underground Museum in Los Angeles in 2012 to the start in 2013 of GCC, a collective focusing on contemporary Gulf culture, this timeline tracks guided and misguided efforts to address the needs and problems of the art world, including gender and racial discrimination, politics, and unfair financial practices, among a multitude of other issues.

The French revolutionary government opens the first public museum in France at the Louvre, a former royal palace in Paris.

After protests by professional women painters, the Royal Academy admits 13 female students before voting once more to ban their admission. Finally, in 1936, a woman artist, Laura Knight, is accepted as a full member of the RA. 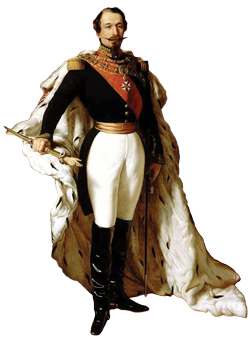 The jury for the annual Paris Salon, held at the Palais de l’Industrie, rejects two-thirds of the paintings submitted, including works by Gustave Courbet, Edouard Manet, and Camille Pissarro. In response to protests by the artists and their friends, Emperor Napoleon III gives the rejected artists a show in a different part of the palace. Although generally dismissed by critics, the Salon des Refusés garners wide public attention for Impressionist art. 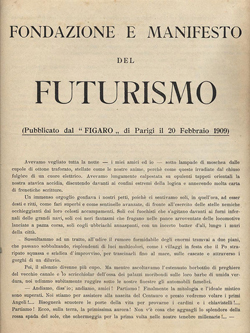 Filippo Tommaso Marinetti publishes the “Futurist Manifesto,” introducing a movement whose Fascistic overtones will complicate the legacy of Italian Modernism. He advocates anarchy and violence. 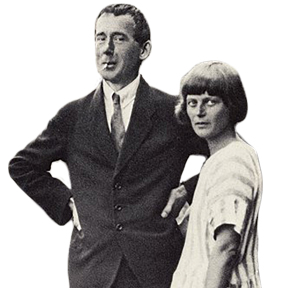 Artist Hugo Ball and his companion Emmy Hennings open the Cabaret Voltaire in Zurich as a “center for artistic entertainment” run by artists and writers. It becomes the birthplace of the Dadaist movement.

Droit de suite (“right to follow”), which entitles artists to receive a fee on the resale of their works, is instituted in France. Droit de suite has been mandated in the European Union since 2001; America’s only droit de suite statute, the California Resale Royalty Act of 1976, was struck down in 2012 as unconstitutional. 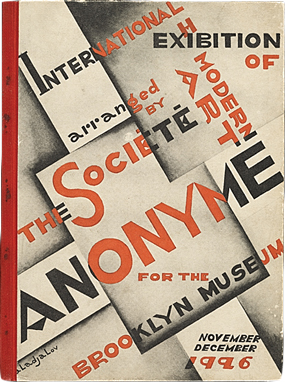 
RIGHT Catalogue cover for the 1926 International Exhibition of Modern Art.

The Works Progress Administration (WPA), a work-relief program, is created to give employment to men and women during the Great Depression. Between 1935 and 1943, the WPA’s art, theater, music, and writing programs support many thousands of artists, putting them to work at their respective crafts.

MoMA founding director Alfred H. Barr Jr. mounts “They Taught Themselves: American Primitive Painters of the 20th Century.” Barr calls outsider art one of “the three great movements of modern art,” together with Surrealism and abstraction. 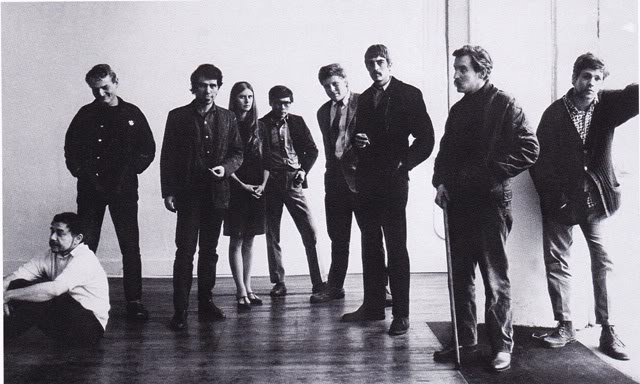 Park Place Gallery, an artist-run cooperative, is founded in SoHo on what is now LaGuardia Place. It moves in 1965 to 542 West Broadway. The gallery’s first director is John Gibson, who is succeeded by Paula Cooper, who in turn opens her own gallery in SoHo in 1968 with an exhibition to benefit the Student Mobilization Committee to End the War in Vietnam.

Arthur C. Danto coins the term “the artworld” in an essay of that name published in the Journal of Philosophy, laying the groundwork for an institutional theory of art.

Founding of the National Endowment for the Arts (NEA), “an independent federal agency that funds, promotes, and strengthens the creative capacity of communities.”

The radical artists’ group Black Mask threatens to shut down the Museum of Modern Art, which police preemptively close. According to the group’s founder, Ben Morea, “we were searching for ways to raise questions about how things were presented, and closing down MoMA was just one of them.” 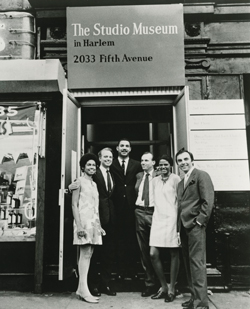 The Studio Museum in Harlem is founded by artists, community activists, and philanthropists who envision “a new kind of museum that not only displays artwork, but also supports artists and arts education.”

Ed Kienholz’s “Watercolors” show (now known as the “Barter Show”) at Los Angeles’s Eugenia Butler Gallery presents paintings of the names of objects or sums of money for which the artist would trade the painting itself, putting the power to dictate terms in the hands of the artist.

After the Museum of Modern Art exhibits a sculpture by Takis against his wishes, a group of artists, filmmakers, writers, critics, and museum staff forms the Art Workers’ Coalition to open up a dialogue between themselves and MoMA. Challenging the status quo of the system through writings, art, and protests, they lay the groundwork for institutional critique as an artistic strategy. 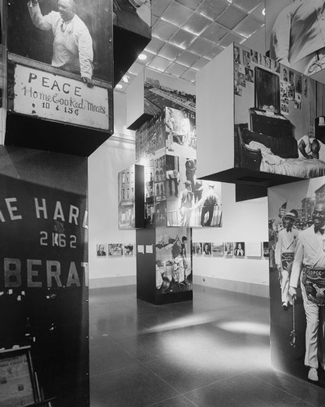 The exhibition “Harlem on My Mind,” featuring photographs, film, and audio of everyday life in Harlem but no actual artworks, opens at the Metropolitan Museum of Art. In response, African-American artists Benny Andrews and Clifford R. Joseph cofound the Black Emergency Cultural Coalition to picket the show and agitate for greater representation of African-American artists’ work in New York City’s art museums. At one BECC demonstration at the entrance to the Museum of Modern Art, a protester holds a sign reading “Retrospective for Romare Bearden Now”; Bearden is given a survey show at MoMA two years later.

RIGHT Installation view of “Harlem on My Mind,” 1969. ©THE METROPOLITAN MUSEUM OF ART, NEW YORK

Art dealer Seth Siegelaub and New York lawyer Bob Projansky create the Artist’s Reserved Rights Transfer and Sale Agreement, which stipulates that artists receive 15 percent of any increase in the value of their art each time it changes hands. While the contract has never been widely used in the art world, artists like Hans Haacke have adapted it for their own use and created similar agreements.

The Guggenheim Museum cancels a Hans Haacke show after a controversy surrounding Shapolsky et al. Manhattan Real Estate Holdings, A Real-Time Social System, as of May 1, 1971, for which Haacke documented poor real estate practices on the Lower East Side and in Harlem. Shapolsky et al. is considered by the museum’s board to be a piece of journalism, not an artwork, inciting a debate about the role of art and institutions. 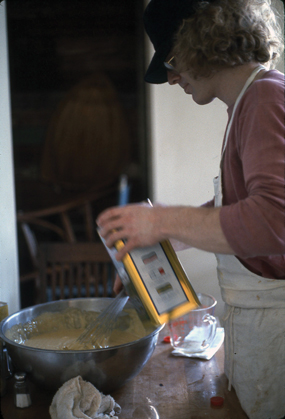 Caroline Goodden, Tina Girouard, and Gordon Matta-Clark open SoHo’s Food restaurant, “an intervention in an urban setting,” as a way to give artists jobs and a place to eat.

“WomanHouse,” an exhibition of feminist art installations and performances organized by Judy Chicago and Miriam Schapiro and their students in the California Institute of the Arts (CalArts) Feminist Art Program, opens in a Los Angeles house collectively renovated by the participants.

For a solo show at the Claire S. Copley Gallery in Los Angeles Michael Asher removes the wall separating the gallery’s office space from its exhibition space, putting the gallery’s daily business operations on view as the art. 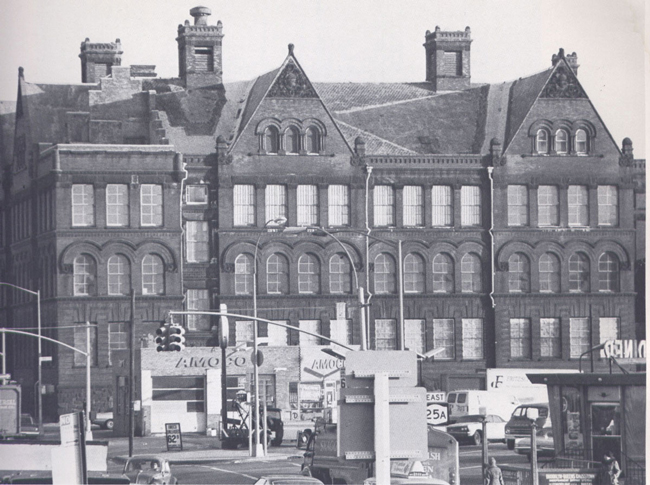 PS1, founded in 1971 by Alanna Heiss as the Institute for Art and Urban Resources Inc., opens in a former New York City public school with the exhibition “Rooms.” The show, which invites participating artists to transform the building’s spaces, establishes PS1’s enduring commitment to large-scale, long-term installations.

Dismissed from her job as curator of painting and sculpture at the Whitney Museum, Marcia Tucker opens the New Museum of Contemporary Art, “an exhibition, information, and documentation center for contemporary art made within a period of approximately ten years prior to the present.” 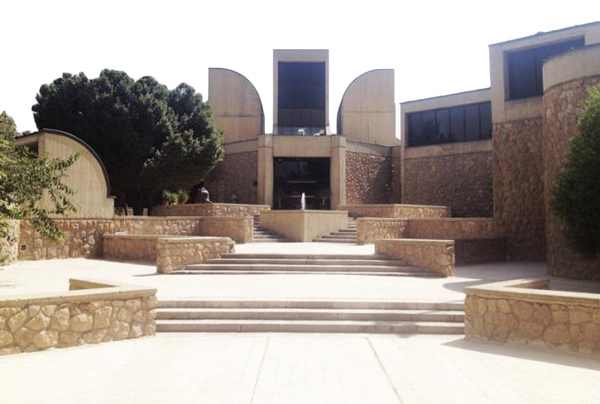 Patroness Empress Farah Pahlavi inaugurates the Tehran Museum of Contemporary Art, whose collection includes 19th- and 20th-century European and American masterworks, as well as Iranian modern and contemporary art. Following the Iranian Revolution two years later, the 1,500 Western artworks are consigned to storage, most of them never since displayed.

ABOVE Tehran Museum of Contemporary Art.

Mayor Edward I. Koch initiates New York’s Percent for Art law, and the Council of the City of New York passes it, requiring that 1 percent of the budget for eligible city-funded construction projects be spent on artwork for city facilities. Administered by the Department of Cultural Affairs, it takes effect in 1983. 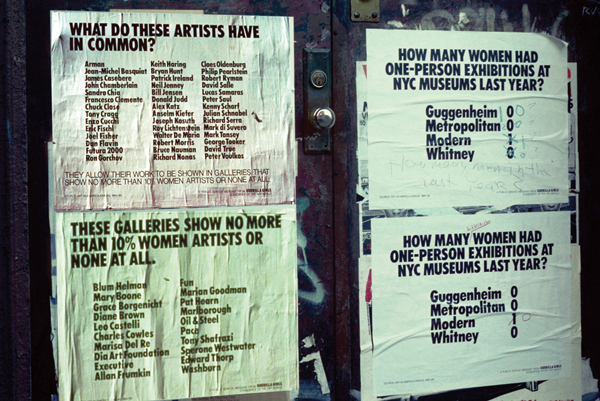 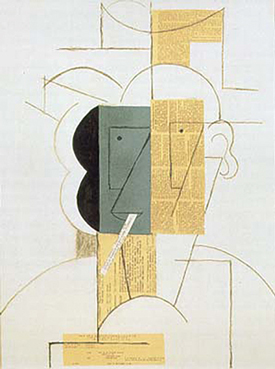 In reaction to the Philip Morris company’s sponsorship of “Picasso and Braque: Pioneering Cubism” show at MoMA, Hans Haacke paints Cowboy with Cigarette (1990), which turns Picasso’s Man with a Hat (1912–13) into a cigarette advertisement. The work is one of many by Haacke focusing on the relationship of museums to big business. 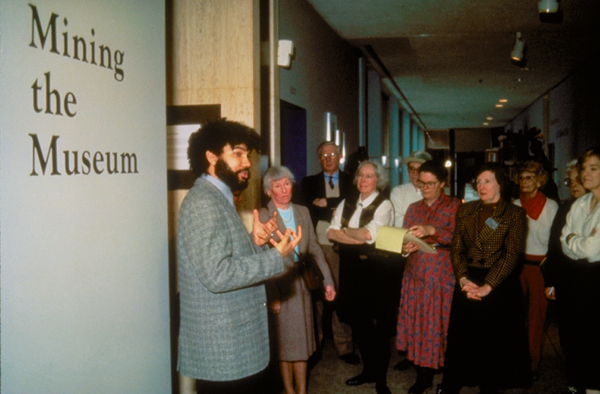 African-American artist Fred Wilson presents “Mining the Museum,” a reinstalling of the Maryland Historical Society’s collection to highlight the history of African-Americans—for example, a display case devoted to 19th-century metalwork is altered to include both silver flagons and iron slave shackles.

ABOVE Fred Wilson giving a talk at the exhibition “Mining the Museum: An Installation by Fred Wilson.” ©FRED WILSON/COURTESY PACE GALLERY

The art collective BANK (Simon Bedwell, John Russell, and Milly Thompson) initiates the Faxbak project, in which gallery press releases are faxed back to galleries with corrections and commentary.

Creative Capital, a New York–based nonprofit, is founded in response to the National Endowment for the Arts’ elimination of most grants to individual artists. Adopting venture capital principles, the organization provides promotional and advisory services, as well as funding, to its awardees.

Former gallerist Diane Brown founds the nonprofit RxArt, dedicated to brightening the lives of hospitalized children through art. RxArt commissions high-profile artists to create site-specific works and installations for pediatric hospitals around the country, overseeing the funding and production of about five projects a year.

Orchard, a gallery operated by a collective of artists, writers, and filmmakers, including Rhea Anastas, Andrea Fraser, Nicolás Guagnini, R. H. Quaytman, and Jeff Preiss, opens on New York’s Lower East Side. Orchard focuses on conceptual and politically driven exhibitions and projects in response to “the second Bush term, the ongoing Iraq and Afghanistan wars, and the booming global art market.”

The Laundromat Project is created in New York to connect artists and communities, particularly communities of color, through fellowships, residencies, and commissions. The organization brings socially engaged art programming to such everyday spaces as laundromats in order to reach, and bring together, as diverse an audience as possible. 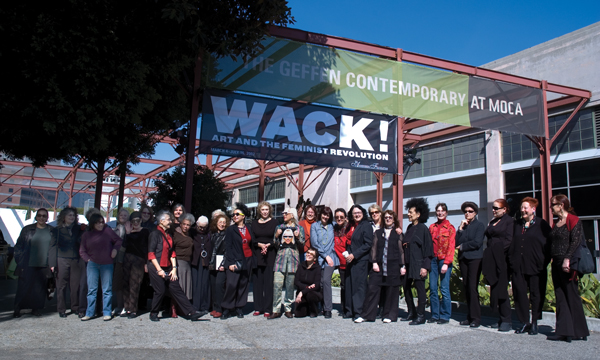 “WACK!: Art and the Feminist Revolution,” the first museum exhibition to present a comprehensive history of feminist art, opens at MOCA, Los Angeles.

ABOVE Some of the participating artists in “WACK!” in front of the Geffen Contemporary at L.A. MOCA. BRIAN FORREST/COURTESY OF THE MUSEUM OF CONTEMPORARY ART, LOS ANGELES;, NEW YORK 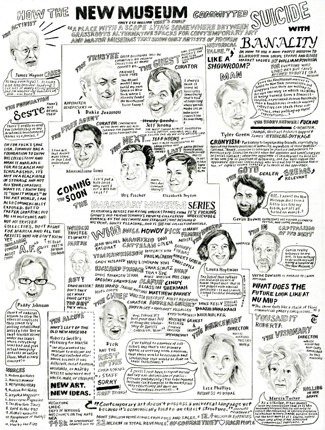 William Powhida’s illustration for the cover of the Brooklyn Rail delineates the commercial and social connections between New York’s New Museum, a collector, and a number of New York galleries.

Working Artists and the Greater Economy (W.A.G.E.), an artists’ group formed in 2008, decides to work toward a single goal: “the regulated payment of artist fees by nonprofit arts organizations and museums.”

Artists and activists found the Gulf Labor Artist Coalition to “bring awareness to issues surrounding the living and working conditions of migrant laborers responsible for building the Guggenheim Abu Dhabi, Louvre Abu Dhabi, and Sheikh Zayed Palace Museum on Abu Dhabi’s Saadiyat Island, along with other buildings on the island, including a New York University Abu Dhabi campus.”

ABOVE Architectural rendering of the Guggenheim, Abu Dhabi. 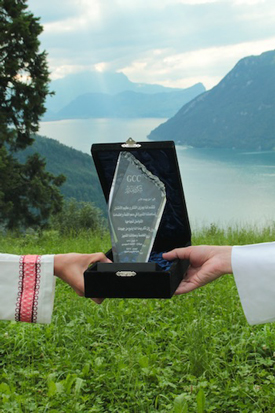 A version of this story originally appeared in the Winter 2017 issue of ARTnews on page 94 under the title “A Timeline of Attempts to Fix the Art World.”