Opening: The NY Art Book Fair at MoMA PS1
Yes! Printed Matter’s art book fair, one of the most fun and positive-vibe-filled events of the year, is back for its ninth edition. So pumped. More than 350 exhibitors are going to be involved, which is just insane to think about. It runs through Sunday, and hours vary each day, so check their website.
MoMA PS1, 22-25 Jackson Avenue, Long Island City, Queens, 6–9 p.m.

“The GROSSMALERMAN Show!” at The Boiler 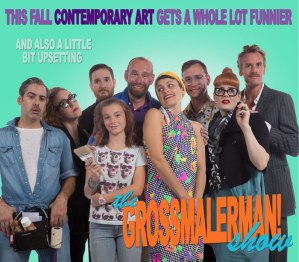 The Guy Richards Smit brings his Jonathan Grossmalerman character to the small screen with a fake sitcom with a live by invitation only studio audience filming at Pierogi’s Boiler outpost. Joshua White collaborates.
The Boiler, 191 N. 14th St., Willisamsburg Brooklyn, 8 to 10 p.m.

Opening: Lisa Beck, “You Are Here” at 33 Orchard
Jane Kim curates a show of work by Lisa Beck, including paintings on mylar and acrylic sculptures.
33 Orchard, 33B Orchard Street, New York, 6-8 p.m.

Update, 5:50 p.m.: Details about the Danh Vo exhibition at the Kitchen have been corrected.